We put the Razer Blade through our usual suite of performance and gaming benchmarks to see how it fared against the competition. For comparisons, we turned to other notebooks equipped with an NVIDIA GeForce GTX 1060, such as the Aftershock S-15, ASUS ROG Strix GL502, and the MSI GS63VR 6RF Stealth Pro.

However, our numbers for those models are from older Skylake-equipped versions, so they’re intended as just a rough guideline.

PCMark 8 attempts to measure the real-world performance of various test systems by putting them through real-world programs and productivity applications. However, because it is reflective of the average workload of a typical user, it does not really highlight the strengths of the respective gaming systems.

The Razer Blade did not outperform its Skylake-equipped counterparts despite its newer processor, which is slightly disappointing. That said, its performance was more or less in line with the other notebooks. The numbers it turned out were also closest to the MSI notebook (the only other notebook under 20mm), and both of them underperformed in the Creative benchmark, so it’s possible that a thinner design does come with a small penalty.

That said, the gaming benchmarks are far more pertinent, and all the PCMark benchmarks show is that the Blade is up to snuff against the competition in basic computing tasks. 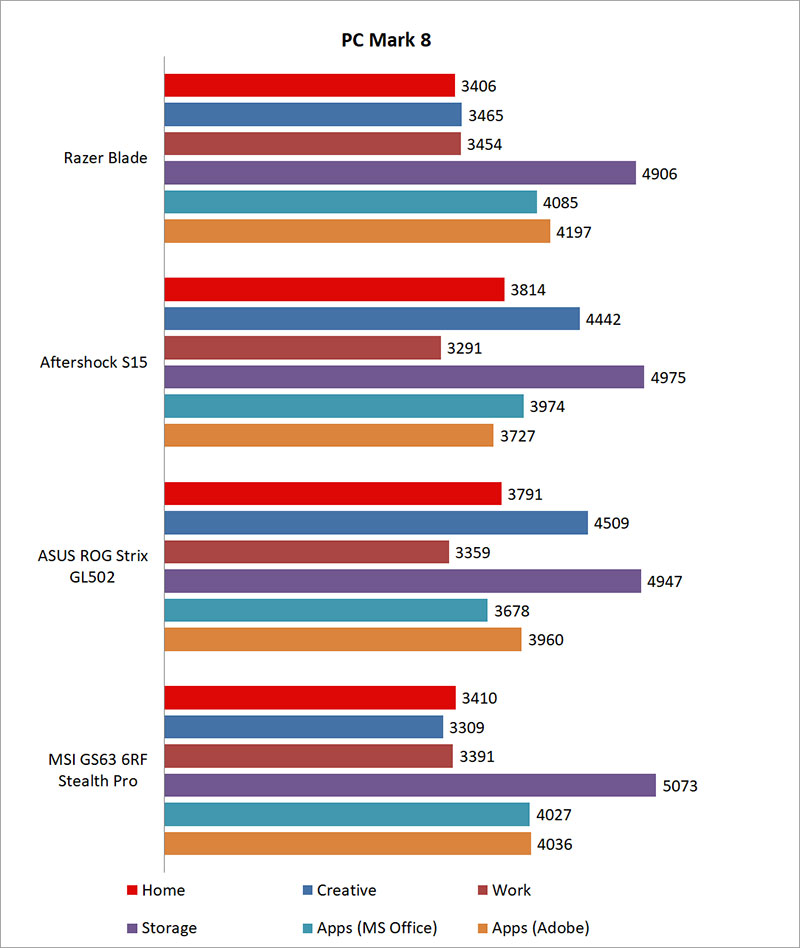 3DMark is far more relevant in assessing gaming performance, and it puts the system through a range of graphics and computational performance tests at different resolutions, starting at 1080p and going all the way up to 4K.

The Razer Blade was just marginally behind the other notebooks, and we wouldn't set too much expectations behind those few percentage points in difference. Still, it does look like the more compact form factor of the Blade is a small drag on performance, perhaps due to the limitations on cooling. 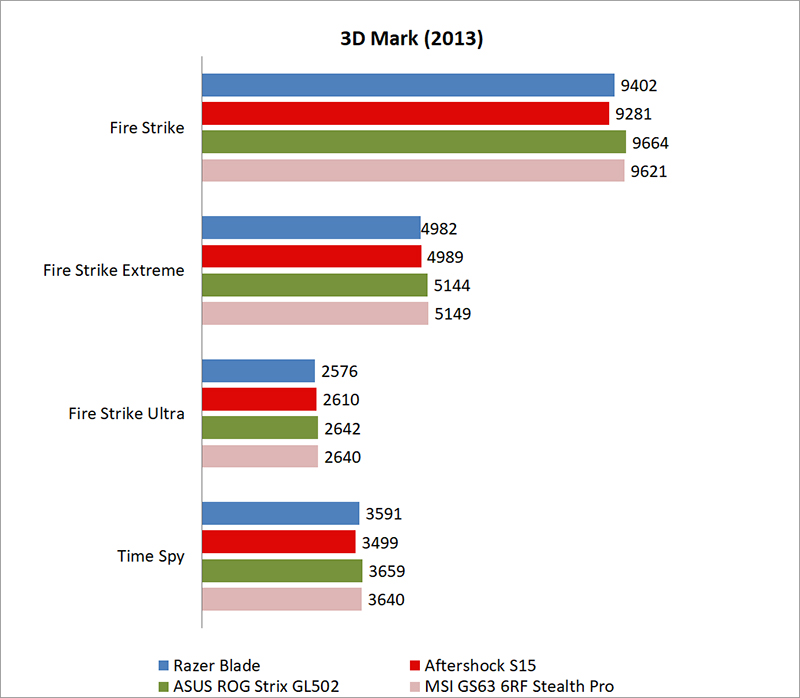 Futuremark’s new VRMark benchmark is designed to assess a PC’s ability to handle high-performance headsets like the HTC Vive and Oculus Rift. If a PC passes the Orange Room test, it is ready for the latter two systems.

The performance differential was more significant here, with the ASUS ROG Strix GL502 coming in at around 9 per cent faster than the Razer Blade and Aftershock S-15. That said, the Blade still comfortably passed the Orange Room benchmark, so it’s fit for use with the Vive and Rift, which is nothing to turn your nose up at, especially for a 14-inch laptop. 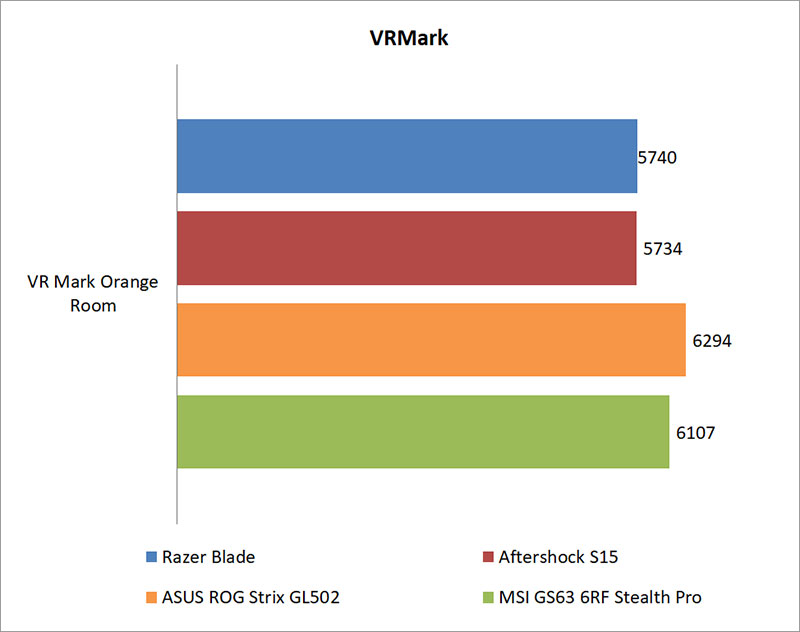 The Blade more or less held its own against the competition, but it was still slightly behind the ASUS and MSI laptops by a few frames. Again, that is no amount to lose sleep over, but it’s still something to be aware of if you’re considering buying it. 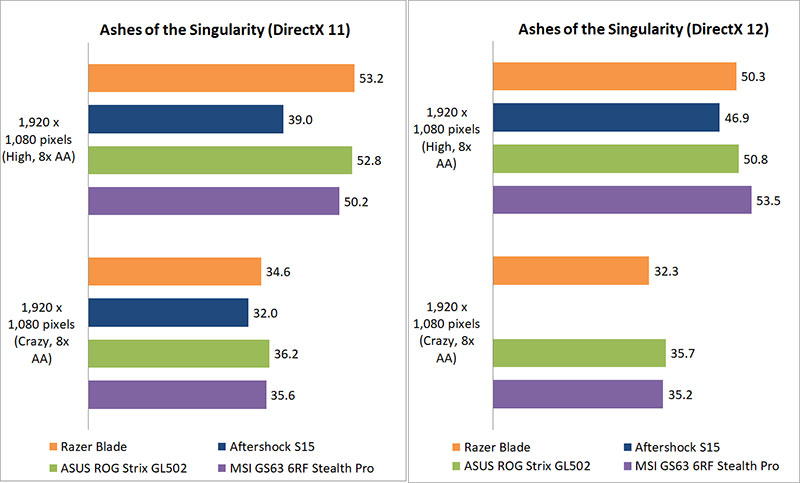 All the tested notebooks did well in Shadow of Mordor, pushing well in excess of the 60fps needed for a decent gaming experience. At Ultra settings, the Blade again trailed the others by a hair, whereas the ASUS notebook did especially well. 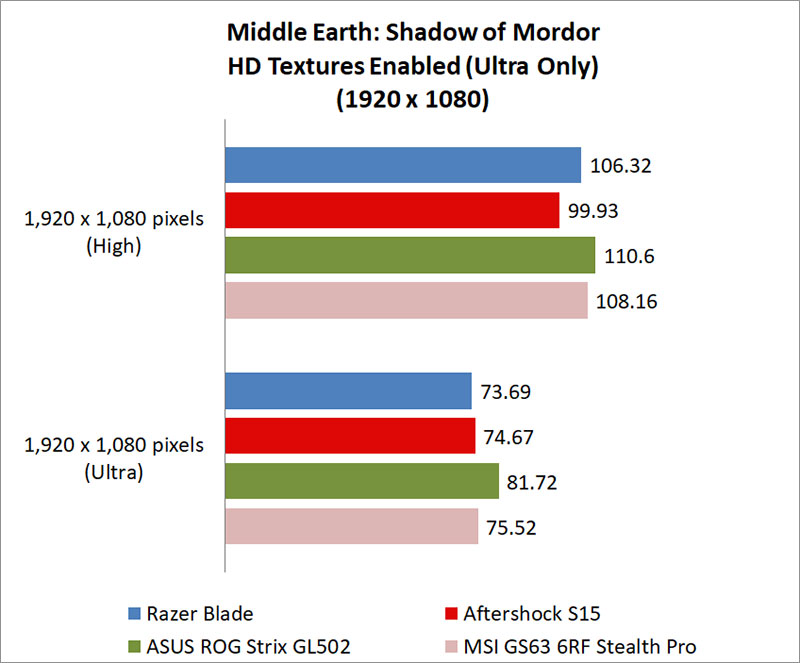 As expected, performance was very close here as well, although Razer’s notebook barely edged ahead of the ASUS and Aftershock laptops at Ultra settings.

With margins as slim as those we’re seeing, it’s difficult to attribute too much import to them, but you could interpret them in one of two ways. The Blade is either a very compact gaming machine with a small performance trade-off, or it delivers great gaming performance for its size. 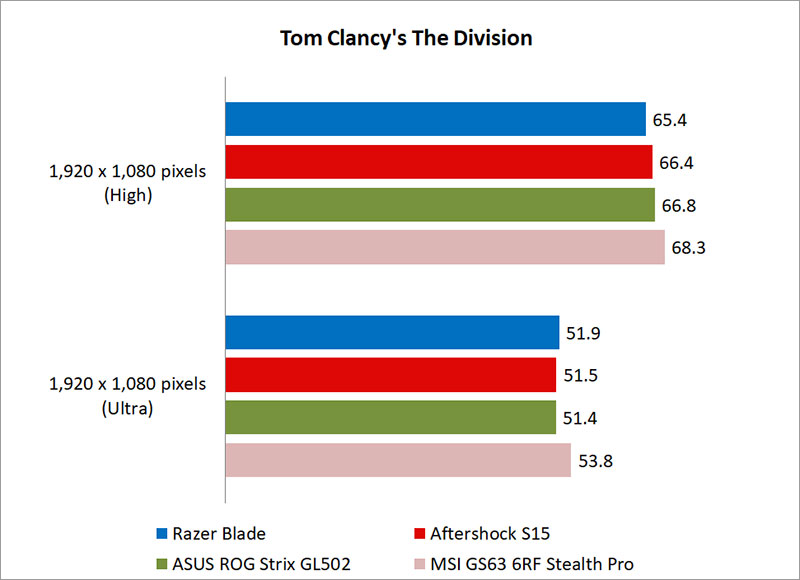 Write a Review
Compare This | Specifications
Gorgeous design and excellent build quality
Slim, light and portable
Good battery life
Compact power brick
NVIDIA GeForce GTX 1060 can handle most games at 1080p
Fans can get very noisy under load
Trackpad not the most accurate
Relatively shallow key travel distance
Our articles may contain affiliate links. If you buy through these links, we may earn a small commission.
Sponsored Links