The Rise of Ultra-portable Gaming Notebooks

Thanks to ever-improving processor technology, we are witnessing the birth of a new genre of ultra-slim and ultra-portable gaming notebooks. The MSI GE40 2OC Dragon Eyes was the first ultra-portable gaming netbook we have reviewed. Gaming notebooks used to bulky machines, but the MSI GE40 packed serious firepower under its hood - enough to crunch through Crysis 2 at full HD - and was just 29mm thick and weighed under 2kg. All in all, the MSI GE40 is a remarkable achievement by the people at MSI.

But if you think that the MSI GE40 was impressive, then prepare to have your socks blown off by the new Razer Blade. Our first encounter with the 14-inch Blade was at Computex 2013, and we were amazed at just how slim and light it was. To be exact, the Blade is just 16.8mm thick at its thickest point (nearly just half the thickness of the MSI GE40), which is quite unbelievable when you consider that that is equivalent to the MacBook Air - although the MacBook Air does taper to just 3mm. As for weight, the Blade tips the scales at just slightly under 1.9kg. 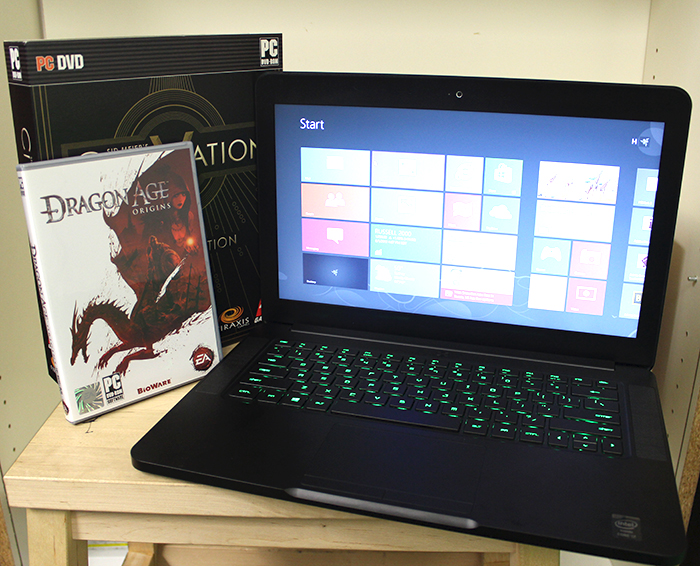 Despite the compact dimensions, the Razer Blade is a true gaming notebook with gaming-class components. The processor is Intel’s new fourth-generation Intel Core i7-4702HQ (2.2GHz) and that is complemented by 8GB of DDR3 RAM and NVIDIA’s new GeForce GTX 765M discrete GPU. The GeForce GTX 765M is identical to the GeForce GTX 760M (768 CUDA cores), but has higher clock speeds - 850MHz vs. 657MHz. The Blade is also available only with flash storage and can be specced with either 128GB, 256GB or 512GB of flash storage. These components make for a very speedy system.

Razer has a very distinct design language that appeals to gamers and this is apparent on the new Blade notebook too. The entire notebook is finished in anodized black aluminum and there is a large Razer logo on the lid and USB ports with green accents. Thanks to the aluminum chassis, the Blade also feels solidly-built and does not flex easily, even if it is thin.

While most notebooks have their exhaust vents located on either sides, Razer has also done a good job of hiding the vents, so that they are not immediately visible. The exhaust vents are hidden at the back, partially concealed by the display hinge. Speaking of which, the Blade does get warm during gaming, especially above the keyboard and around the speakers. The fans spin audibly too and can get quite loud, but this is nothing unusual for notebooks with high-end components such as the Blade.

The Razer Blade is really thin, and measures just 16.8mm thick - the same as a MacBook Air. Like the MacBook Air, the Razer Blade does not offer Ethernet connectivity, but it makes up for that with Killer Wireless-N technology. Speaking of connectivity, the Blade offers three USB 3.0 ports and a HDMI output, which is a little sparse in our opinion. The lone HDMI output means the Blade can only drive external displays of up to Full-HD (1080p) resolution @ 60hz - a pity considering it has a powerful GPU.

The weight, as we have mentioned earlier, is just 1.88kg - not featherlight when compared to true Ultrabooks, but certainly manageable for most people. To make sure the Blade is really portable, Razer has also ensured that its 150W power adapter is not cumbersome too. It is easily one of the most compact power adapters we have seen. 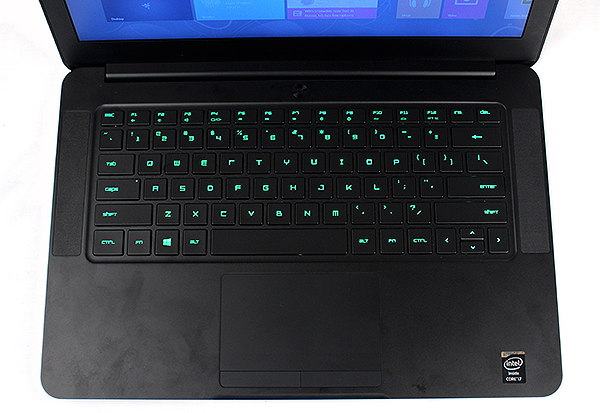 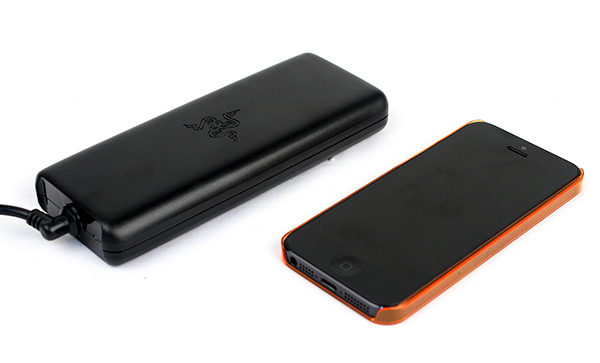 Like the MSI GE40, the Blade has a 14-inch matte TN display with a resolution of 1600 x 900 pixels. The decision to go with such a display has been widely criticized, and perhaps rightly so considering that the Blade is positioned as a premium product and is built with enthusiasts with mind. However, after chatting with Razer’s Director of Global Product Marketing, Heathcliff Hatcher, at Computex 2013, we learnt that there are two key reasons behind this.

Firstly, Heathcliff said that an IPS panel would have made the Blade thicker, which would mean it would be impossible to achieve its current thickness of just 16.8mm. Secondly, by sacrificing slightly on resolution, it would allow the Blade to hit even higher frame rates on games. 1600 x 900 as compared to Full-HD resolution is about 30% less pixels to fill. 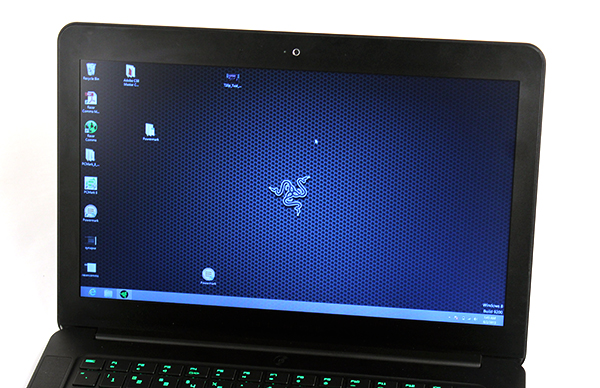 While these are certainly valid reasons, we cannot help but feel that there is a mismatch between the display and the rest of the notebook. The MacBook Air’s TN display is one of the best around and shows that you do not necessarily need an IPS display to have good visuals. However, the Razer Blade’s TN display is no where as good as the MacBook Air’s. It looks washed out and colors are a tad lifeless.

Beyond the display, the Blade has a chiclet keyboard that glows with green backlights. It is a unique color combination that says very clearly that this is a Razer product. Also, it is hard to look at the Blade in a dark or dimly lit room with the green backlights on and not think, “Wow. That looks cool.”

The keyboard also features anti-ghosting technologies, which ensures that all your commands are recognized, great for Starcraft players with high APMs. The keys are a joy to use and offers a satisfying "click" sound when they are depressed. That said, if we could nitpick, we would like the keys to have a little more travel so that they will be more tactile. 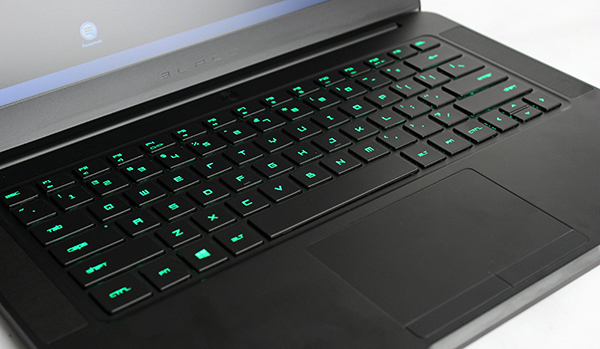 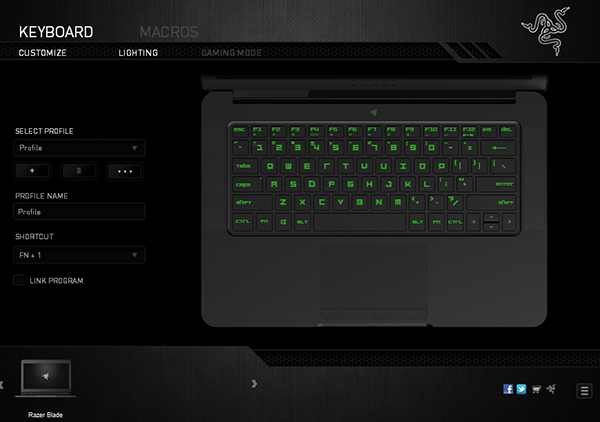 Sadly, the trackpad pales in comparison with the keyboard. The trackpad is spacious but it is not clickable and instead relies on two separate buttons located below it, which we found to be too thin to be used comfortably, for left and right click functions. Additionally, we found its tracking to be a bit erratic and - it could be hypersensitive one moment and irresponsive the next.

Finally, the Razer Blade comes preloaded with Razer’s own Synapse 2.0 unified configuration software, which lets you rebind keys or assign macros on both the Blade and any other Razer peripheral; and also Razer Comms, Razer’s own communication software which lets you and your team-mates chat via voice or text. You can read more about the Razer Comms software here and here.

Read 1 User Review
★ ★ ★ ★ ★
Write a Review
Compare This | Specifications
Well-built, compact design
Good performance
Good keyboard with cool green backlight
Killer Wireless-N connectivity
Display is substandard
Trackpad is erratic to use
Connectivity options can be better
Our articles may contain affiliate links. If you buy through these links, we may earn a small commission.
Sponsored Links