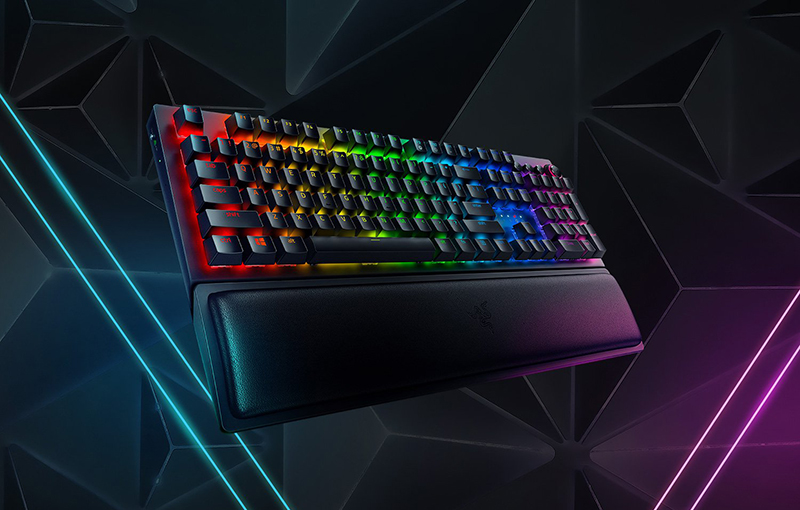 The most advanced BlackWidow you can get

The Razer BlackWidow is something like the quintessential gaming keyboard. The first ever BlackWidow, the BlackWidow Ultimate, made its debut way back in 2010, and Razer has since gone through multiple iterations of the same keyboard. The BlackWidow V3 Pro is its latest and most advanced, finally bringing Razer's HyperSpeed Wireless tech to the keyboard, alongside a host of other improvements.

This is perhaps the most fully-featured BlackWidow to date, and it comes with just about everything you could want from a gaming keyboard, including versatile support for wired, Bluetooth, and 2.4GHz connections. Build quality feels super premium, with an aluminium top plate sitting on top of a sturdy plastic base. The edges of the top plate can feel a tad too sharp though, and it'd have been nice to have slightly more rounded edges for a friendlier feel, even if you're not really in any danger of cutting up your finger. 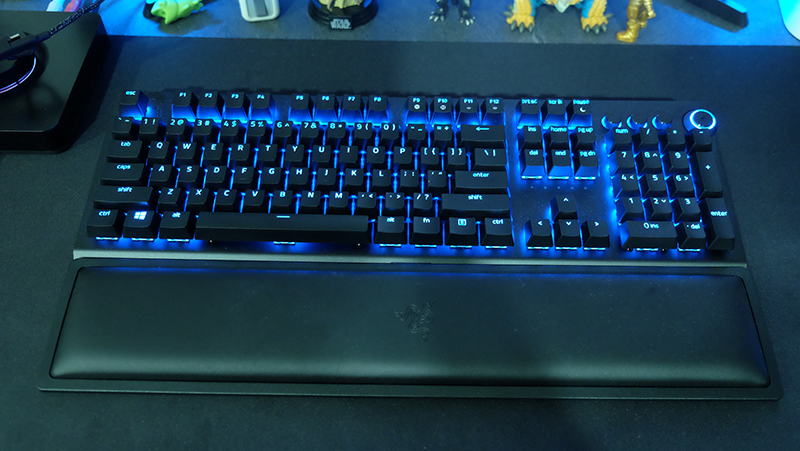 The keyboard even comes with a plush, leatherette wrist rest, which greatly aids your typing experience. Given the keyboard's steep asking price, I'd have liked to see it attach magnetically (like the Huntsman Elite), but Razer has settled for an inclined edge that fits nicely against the front edge of the keyboard. The wrist rest comes with more than ample cushioning, and it really helps in supporting your wrists when typing for long hours.

I'm not a fan of the full-sized layout as I find that it takes up valuable mousing space and is less ergonomic to use because of the difficulties with centring it, but I get that there are people who appreciate having the full selection of keys available.

It's worth noting that some of the BlackWidow V3 Pro's stiffest competition comes from Razer's own line-up in the form of the Huntsman line of keyboards. With aluminium plates, optical switches, and detachable USB-C cables, the full-sized Huntsman Elite, tenkeyless Tournament Edition, and 60% Mini are some of the best gaming keyboards around. Many of the features of the Huntsman models have made their way over to the BlackWidow V3 Pro, including a very familiar knurled volume dial and dedicated media buttons from the Huntsman Elite. 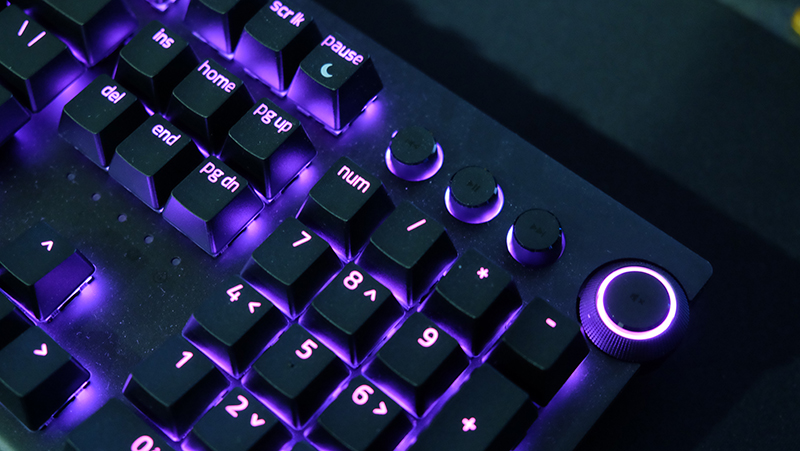 The volume dial rattles a little, producing a very audible sound when you turn it. It's nothing too bothersome, but a smoother, tighter mechanism would have made the whole experience a lot better. You can program the dial and media keys to suit your needs, and the wheel can even be used to adjust the backlight brightness if you want. You can reprogram every key on the keyboard using Razer Synapse 3 software, with the exception of the Windows key and Fn.

At S$359, BlackWidow V3 Pro is even slightly more expensive than the Huntsman Elite. That's not a small amount of money to splash on a keyboard, and Razer will need to do a lot to justify the price tag. If you like RGB lighting though, the BlackWidow V3 Pro should make you very happy. The RGB lighting implementation is absolutely stellar, as I've come to expect from Razer's peripherals. The keyboard legends are tastefully slim, and backlighting is bright and even, with a mind-boggling range of effects and customisations available through Synapse 3. The lighting can also dynamically react to over 150 games, if you're into that sort of thing. 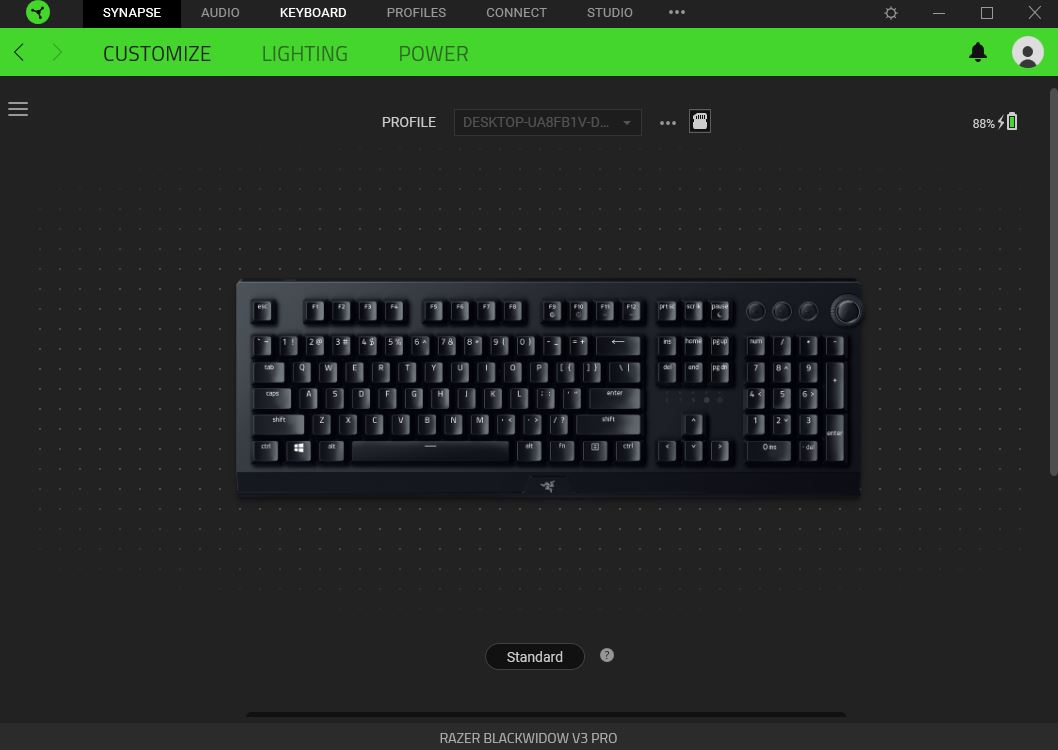 You can store a total of five onboard profiles, but your RGB settings will not carry over if you plug the BlackWidow V3 Pro into another computer. And even if you're on the same PC, Synapse 3 will need to be open for your lighting profiles to trigger.

The keycaps are doubleshot ABS, so the legends will never wear off, and Razer says it's made the keycap walls extra-thick for improved durability. It's a pity that the company has decided to forego PBT keycaps this time though, especially given the price. Thankfully, Razer has also gone with a standard bottom row here, so you'll be able to swap out the stock keycaps for third-party ones when they start to shine (and they definitely will). For what it's worth, the default ABS keycaps are slightly more textured than the ones on many other keyboards, which means they don't pick up smudges as easily. 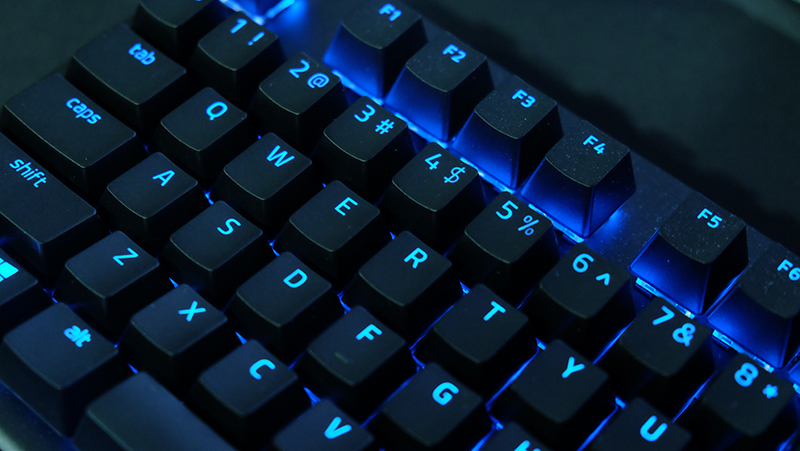 My review unit came with Razer's clicky Green mechanical switches, which now feature a transparent switch housing to allow the RGB LEDs to shine through more brightly. These have an actuation force of 50g, but as with most clicky switches, the actuation and reset points sit in different places, with a distance of 0.4mm separating them. This is technically less conducive to rapid-fire keypresses, and while the average gamer probably won't notice anything, it's still something to take note of. If you're really worried, the BlackWidow V3 Pro is also available with linear Yellow switches, which have the added benefit of being quieter as well. 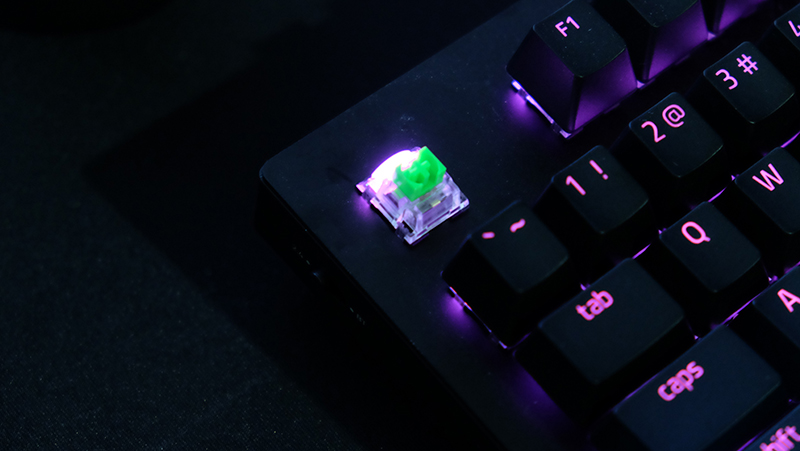 Razer's mechanical switches share similarities with Kailh Box switches, featuring dual side walls that offer greater stability and increased protection against dust and liquids. There is still noticeable switch wobble though, but nothing that is markedly worse than on other comparable boards.

A switch on the left edge lets you toggle between 2.4GHz, wired, and Bluetooth modes. You can easily pair the keyboard with multiple PCs in Bluetooth mode as well, and switch between them using a combination of Fn + 1, 2, or 3. However, I mostly opted for the 2.4GHz mode, which offers performance that is indistinguishable from using the keyboard with its cable. Once the wireless dongle was plugged in, connectivity was instantaneous and there was no noticeable lag in getting the keyboard to turn on when I flicked the switch.

There is a small compartment for storing the dongle at the bottom of the keyboard, and the dongle is helpfully labelled with the keyboard's model name – a godsend for telling it apart from the myriad other Razer dongles you might have. 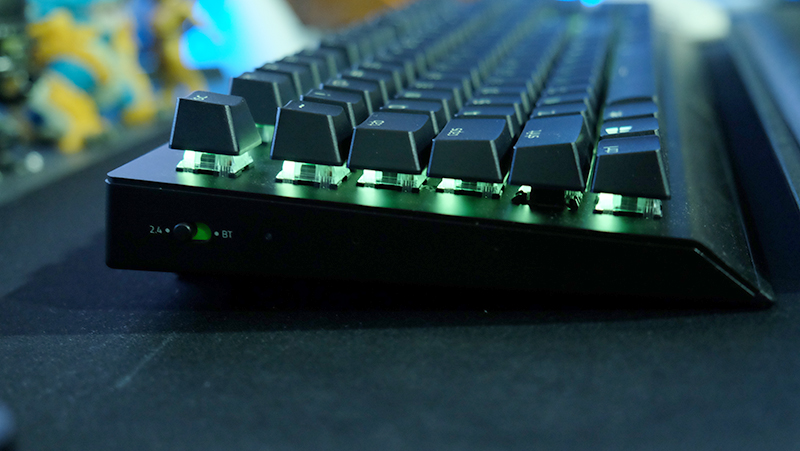 Razer is claiming up to 192 hours on battery with RGB lights turned off. Battery life is actually excellent in this scenario, even on the 2.4GHz connection, but it drops significantly to just under 15 hours with the LEDs on at maximum brightness and set to spectrum cycling.

The BlackWidow V3 Pro is a high-end wireless keyboard with a premium price tag to match. It costs S$359 and comes packed with nearly every feature you could want, even if there are some things missing like the PBT keycaps and magnetic attachment for the wrist rest. Battery life is also middling with the RGB lighting turned on, and let's face it, you don't buy a Razer product just to turn the RGB LEDs off. Still, build quality is solid and wireless performance excellent. And when combined with the dedicated media controls and powerful customisation options, the keyboard is still overall a pretty decent effort from Razer.

The price is hard to swallow, and if you can forego some of its features, such as wireless support, you're better off with the Huntsman Tournament Edition (which we've also reviewed). But if you're looking for a full-sized, wireless mechanical keyboard, the BlackWidow V3 Pro is about as good as they come.

Have we piqued your interest? You can get the BlackWidow V3 Pro from Razer's own e-store now. Alternatively, Razer has an official store on Shopee and Lazada too.