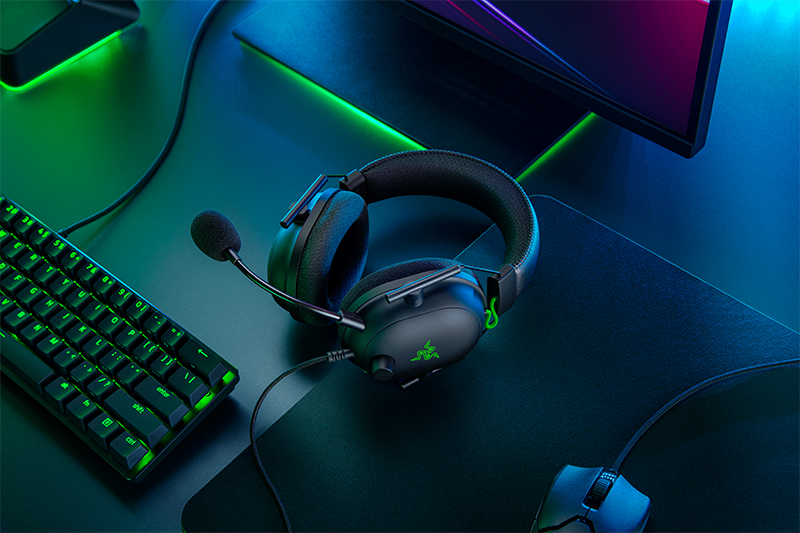 One of the best gaming headsets you can get today

Razer has brought back its BlackShark headset with a V2 version that retains its signature aviator aesthetic, and it may just be in the running for the best gaming headset that Razer has ever made. The BlackShark V2 is a no-nonsense, esports-focused headset, and it is blissfully free from gratuitous RGB lighting and other bits and bobs that don't add anything to your game. No doubt the lack of RGB lighting also helps keep costs down, and I'm happy to see Razer take this more utilitarian approach. This is a good-looking and functional device, checking all the boxes when it comes to design, comfort, and sound quality.

Compared to the regular BlackShark V2 X, which is its more affordable sibling, the BlackShark V2 also comes with a USB sound card, which adds support for THX Spatial Audio for improved positional audio accuracy. At S$159.90, the BlackShark V2 is pretty reasonably priced as well, and it may just be the first headset from Razer that I find myself actually wanting to use on a daily basis. 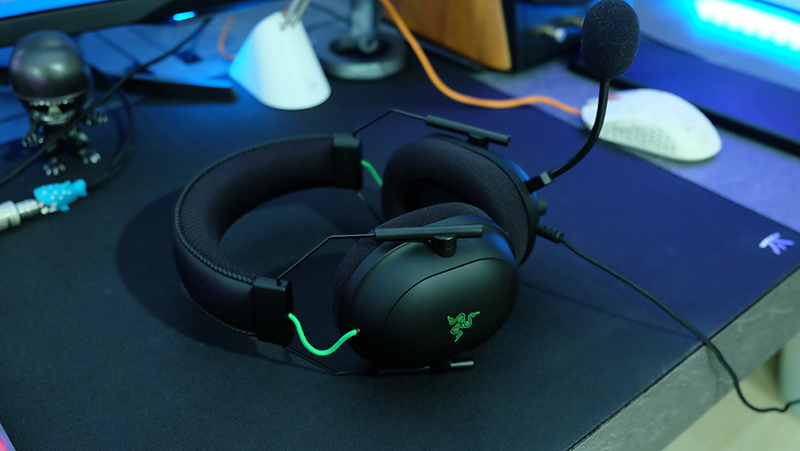 Right off the bat, this is one of the most attractive gaming headsets I've seen in a while. The sleek, black aviator-style ear cups make for a subdued look, and the matte black finish feels really nice under the hand. The Razer logo is stamped in bright green on the ear cups, whereas the BlackShark V2 X features an even more muted black-on-black logo. I'd have preferred to see the latter on the more premium version of the headset, but the green logo does add a nice pop of colour for those who prefer a slightly louder design.

Conversely, the BlackShark V2 X has a bright green rubber cable, while the BlackShark V2 has a black paracord-style cord that looks to be the same Speedflex cable that Razer uses on its latest mice. This means it is soft, supple, and very flexible – microphonics are also virtually non-existent, and I'm really enjoying the use of this cable on a gaming headset. 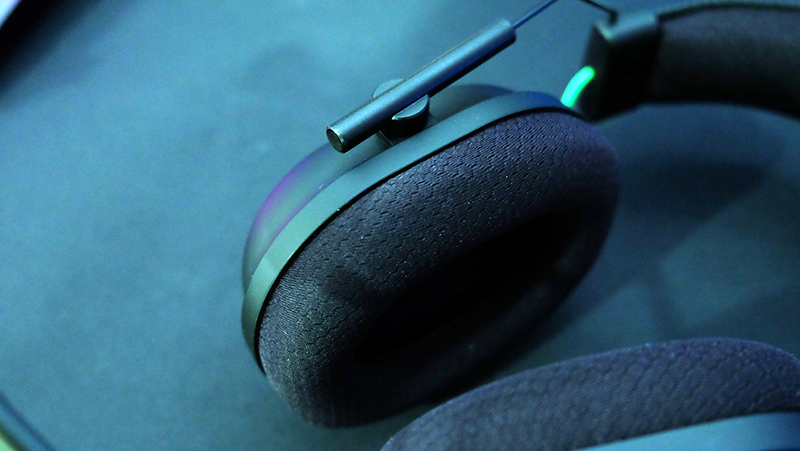 And when you put the headset on, boy is this thing comfortable. I've always had trouble finding a comfortable headset – something always seems to be off and they generally end up feeling really uncomfortable after just a few hours. That certainly wasn't the case with the BlackShark V2. The ear cups are comprised of ultra-soft memory foam layered with breathable FlowKnit fabric that is supposed to minimise heat build-up and perspiration. They are plush and glorious and I was able to wear them for hours on end without any discomfort. The soft fabric material also feels better than the leatherette ear cups you get on many gaming headsets today and are a lot cooler to use. You also won't have to worry about them peeling either so this bodes well for long-term use.

The same combination of memory foam and knit fabric has been applied to the headband as well, and the generous padding helps ensure that your noggin is gently cupped by soft foam all around. The top of the headband is still leatherette however, and it does add a more sophisticated touch to the overall look. At 262g, this is also a fairly light and sprightly gaming headset, which helps make it even more comfortable to wear for long stretches of time. The addition of a few tens of grams may not seem that significant at first, but the extra weight will definitely make itself felt after a few hours. 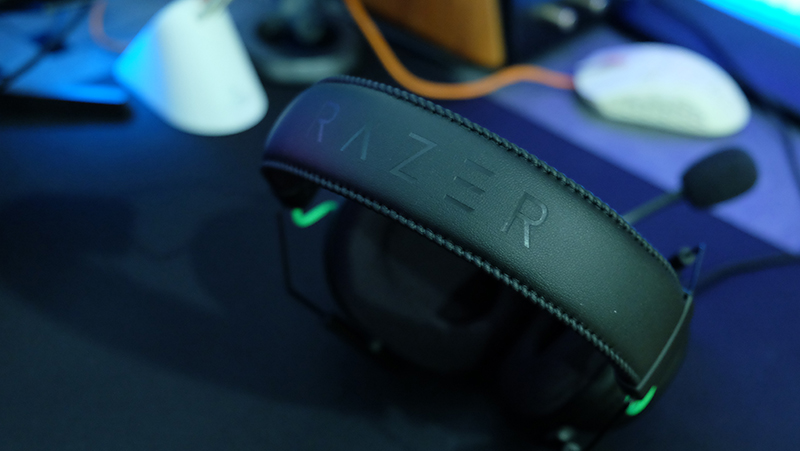 The ear cups and headband feel well-made and no part of the headset feels cheap or flimsy. However, the minimalist look of the BlackShark V2 does come with certain trade-offs. The ear cup adjustment mechanism isn't the best, and it is lacking any sort of precise, numbered notches to ensure that both ear cups sit at the same position. Instead, each ear cup slides smoothly along parallel metal rails, so it's near impossible to arrive at identical adjustments for both sides. The ear cups are also connected to the headband via a green audio cable. When the ear cups are fully extended, the cable fortunately doesn't go entirely taut, but it seems like this could be a potential point of failure if you aren't careful with the BlackShark V2. Having said that, I was able to adjust the headset to suit me pretty easily without much fiddling. 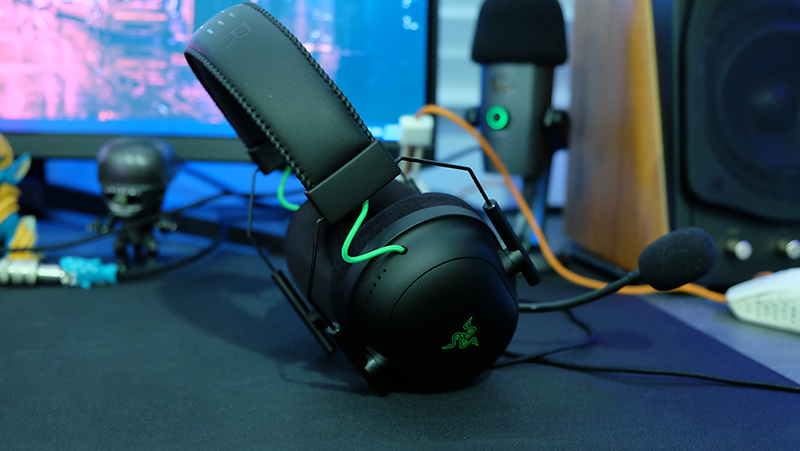 The passive noise isolation is also pretty good, and you'll find that the BlackShark V2 is able to block out the bulk of the noises of daily life from the rest of your household, or at the very least the hum of your PC and the clack of your keyboard.

The volume knob and microphone mute button sit on the left ear cup. The knob feels nice and smooth, and there is a helpful notch at the halfway mark to tell you when you're at 50 per cent volume. The mute button sits slightly lower – simply depress it to quickly mute your microphone and press it again when you need to speak. 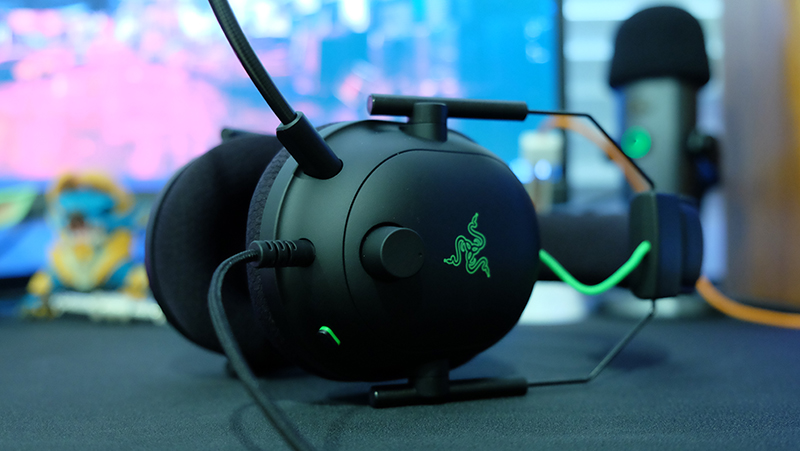 The BlackShark V2 plugs into your PC via a USB connector, but it can also use a 3.5mm audio cable, so it'll work across multiple platforms including PC, Mac, PS4, Xbox One, Nintendo Switch, and mobile devices. However, the USB Sound Card is only compatible with Windows 10 PCs.

The BlackShark V2 uses Razer's new TriForce Titanium 50mm drivers, where the audio driver is divided into three distinct parts to allow for the individual tuning of low, mid, and high frequencies. According to Razer, traditional drivers tune across frequencies using the same section of the audio driver, which can result in muddy sound. It seems like Razer is trying to mimic the concept of individual balanced armature drivers in in-ear monitors, and the new drivers are supposed to enable brighter, clearer audio with richer treble and harder hitting bass. In addition, the audio drivers feature titanium-coated diaphragms for improved clarity and less distortion. In comparison, the drivers on the BlackShark V2 X lack this titanium coating. The BlackShark V2 is also outfitted with what Razer says are thicker speaker cavities for clearer mids and highs and a louder overall volume.

In practice, I can attest that the BlackShark V2 offers some of the best sound I've heard from a gaming headset, in a package that costs under S$200. It is notably missing the characteristic shrillness of many gaming headsets and the overwhelming bass that tends to muddy the rest of the frequency range. While the BlackShark V2 isn't going to win any awards for clarity or transparency – the audio still sounds like there's a bit of a veil over it – it does offer relatively full-bodied sound in both games and music.

One of the headlining features is the support for THX Spatial Audio, and it works pretty well, for the games that support it that is. Razer is introducing special THX Game Profiles on the BlackShark V2, which means you get custom-tuned profiles for specific games. The list of supported games is still a bit limited at the moment, and even a popular title like Overwatch isn't supported yet. That said, games like Apex Legends, Valorant, Call of Duty: Modern Warfare, and even Monster Hunter: World are on the list. You'll be able to see which games are supported in Synapse 3 from the THX logo under each program, and certain titles will offer you a choice between THX Competitive and Environment Mode, or just one of them. Environment Mode basically focuses on immersion and realistically projects the sound around you based on each game's unique environment, while Competitive Mode is all about spatial awareness and accurate positional audio. 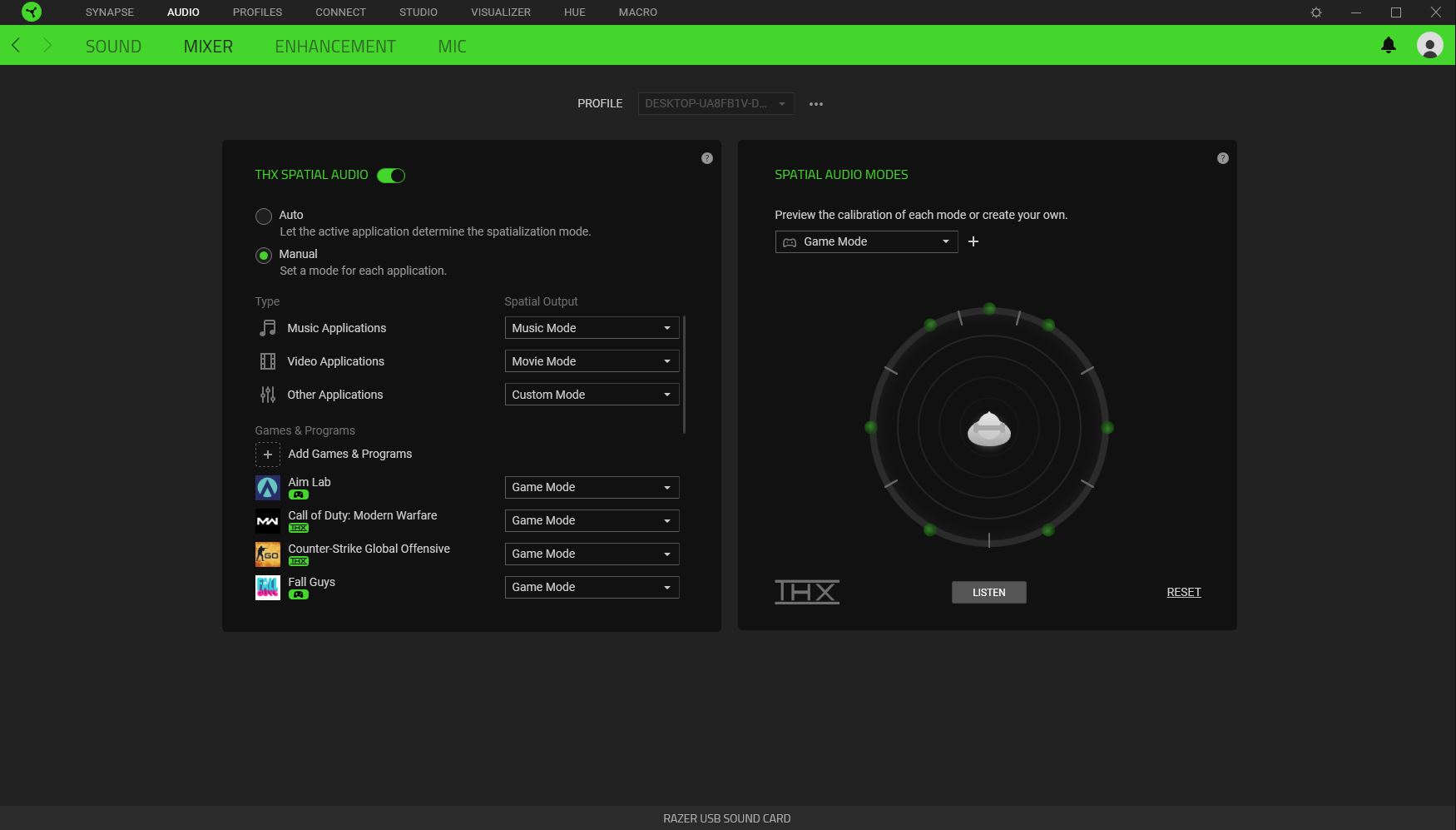 I tested out the THX Competitive Mode in Valorant, and I was able to quite clearly distinguish the direction of gunfire and footsteps, and also the unique quality of footfalls on different surfaces in the game. While I generally prefer stereo sound for positional audio in games, the custom-tuned THX Game Profiles serve up a delicious amount of detail and immersion, with a decent edge in terms of directional clarity. I'd recommend taking advantage of these profiles if your game of choice is supported.

The detachable boom microphone is Razer's new HyperClear Cardioid Mic (the mic cannot be removed on the BlackShark V2 X), and it features passive noise cancellation and a cardioid pattern with a more focused voice pickup area. There's even a helpful microphone sign on the mic itself that is supposed to be facing you, so you know it is oriented correctly. Audio quality on the microphone is decent but not amazing. My team had no issues hearing me and the microphone didn't pick up the whir of my graphics card, but they weren't wowed by the crystal-clear clarity of my voice either.

The USB Sound Card that ships with the headset adds some extra features that you may or may not find useful. There's a voice gate feature, which basically helps the mic limit the pickup of background noises by only allowing it to pick up sounds when you're speaking, and also dedicated ambient noise reduction. There's a 10-band mic equalizer as well, in case you want to further modulate your voice. Finally, the sidetone feature lets you hear what you sound like in real-time, which may be helpful for streamers. The Razer BlackShark V2 is an exceedingly capable gaming headset and almost a no-brainer if you're looking for a headset that will give you good positional audio at a reasonable price. Its esports focus will appeal to fans of competitive shooters, and its lightweight design and plush, breathable memory foam ear cups mean that it is easy to wear for long hours. The new THX Spatial Audio and Game Profiles do bring something new to the table and the BlackShark V2 is currently the only headset that offers this. Sound quality is great, particularly for a gaming headset, and while the BlackShark V2 really shines in games, it is perfectly serviceable for both music and movies as well (just don't nitpick at things like detail resolution and clarity).

Razer has nailed down nearly everything that makes a great gaming headset and priced the BlackShark V2 at an attractive S$159.90. It is one of the best mid-range gaming headsets money can buy and also one of the easiest to recommend.

Interested to purchase one? You can get the BlackShark V2 from Razer's own e-store now. Alternatively, Razer has an official store on Shopee and Lazada too.