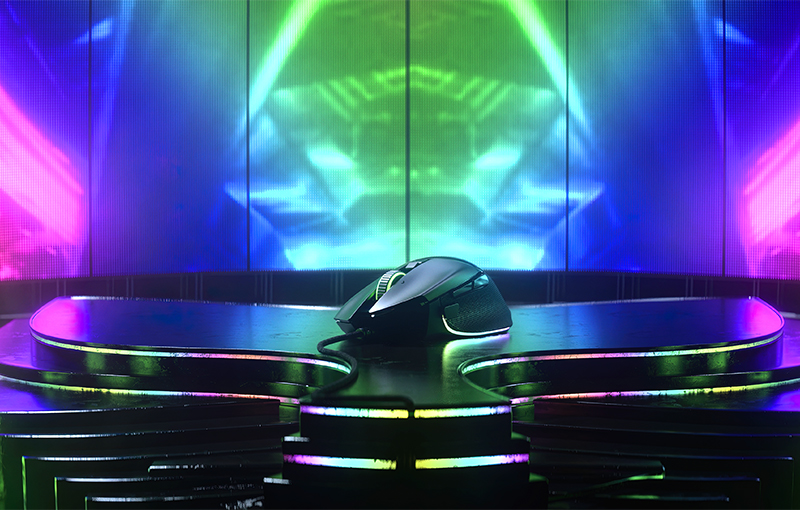 A mouse that wants to do it all

The first Razer Basilisk was billed as a mouse for FPS gamers. Two generations later, the mouse has now evolved into something a bit different. It still retains its signature thumb paddle, but Razer is now pushing the Basilisk V3 as a mouse built around deep customisation. With up to 11 programmable buttons, including the paddle, a smarter scroll wheel, and 11 different Razer Chroma RGB lighting zones, there's plenty to tweak and play with here.

Having said that, the Basilisk V3 isn't vastly different from the V2 model at first glance. They share the same right-handed, ergonomic shell and design, alongside the prominent ledge for your thumb and rubber side grips. It's a very safe, comfortable shape that works great with the palm grip, but less well with the more precise claw or fingertip grip. 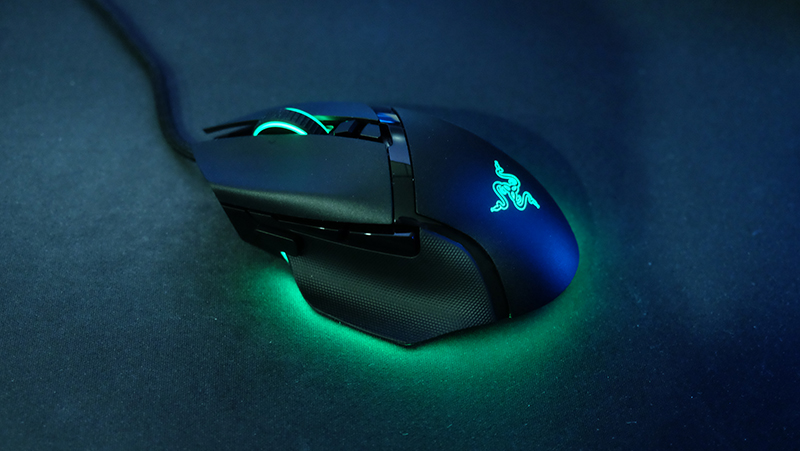 The multi-function trigger button on the left presents something of a conundrum. While I'm able to palm the mouse quite comfortably, reaching the trigger button is a different matter entirely. My hands are pretty small, and I'm simply unable to reach the button without lifting the base of my palm completely off the desk. This makes for a rather awkward grip, and I think it's safe to say that the Basilisk V3 is better suited to folks with larger hands. How you grip the mouse matters too – your thumb sits further back with the claw and fingertip grip, which will make reaching the trigger even harder.

Unfortunately, Razer has shortened the trigger button coming from the V2, and it is also non-removable now, so you can't simply pop on a longer one as you could on the V1 model. The upside is that the trigger now feels very sturdy and tactile, and you don't have to worry about losing it. 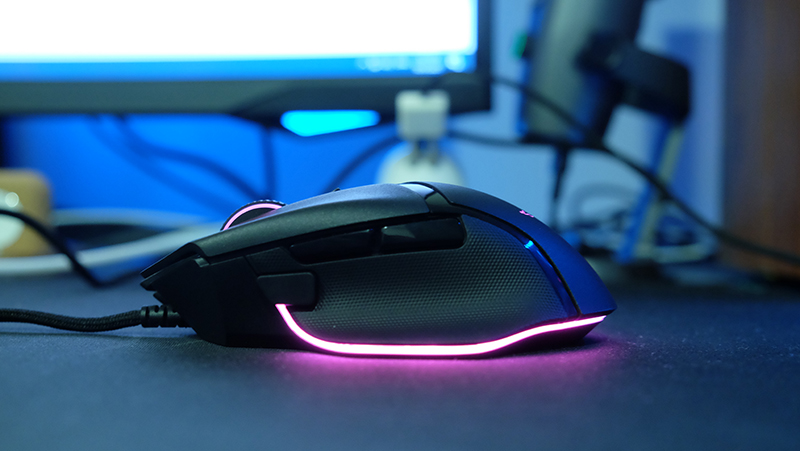 The trigger decreases your DPI by default for more precise sniping, at least in theory, but I think that is really the least useful function you could bind to it. With most games allowing you to set a custom scope sensitivity, I see no reason why anyone would want to fumble with an extra button on their mouse when sniping. Instead, the trigger is better mapped to your push-to-talk button, ping, or even to toggle your fire mode in games like Apex Legends.

The scroll wheel isn't something I expected to see in a gaming mouse. It's basically Razer's version of Logitech's MagSpeed Wheel on mice like the MX Master 3, dubbed the HyperScroll tilt wheel. It offers two different scrolling modes, tactile cycling and free-spin. Tactile cycling is your regular notched scrolling mode, while free-spin lets you smoothly scroll through long documents or large canvases. And like Logitech, there is a smart-reel mode that automatically switches from tactile to free-spin when you scroll faster. Another feature called Virtual Acceleration increases the scroll speed the faster you scroll, so you can get through lengthy documents even quicker. 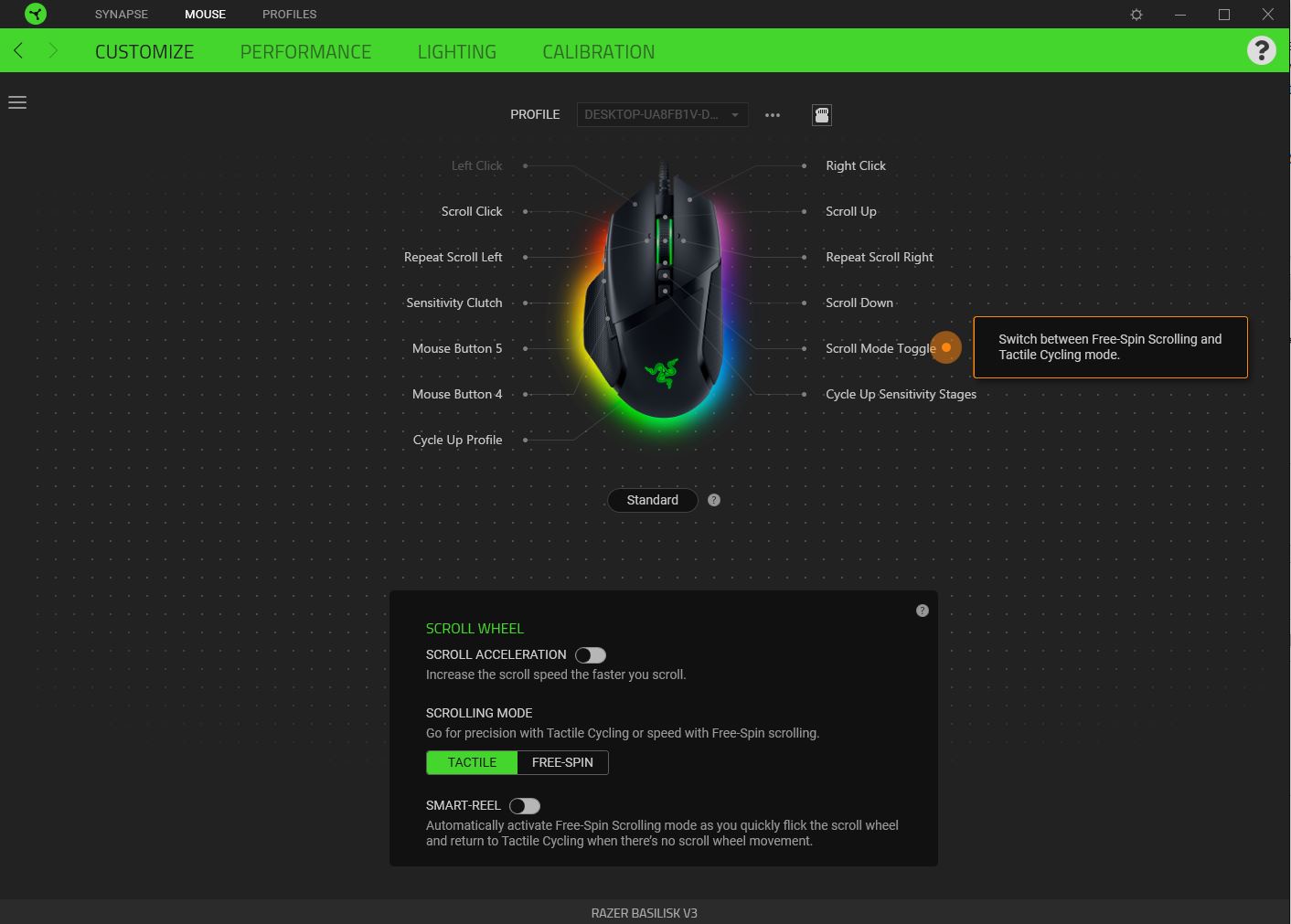 You can adjust all this in Synapse, and toggle between both scroll wheel modes using the button below it. It doesn't feel as slick as Logitech's premium all-metal implementation, but the smooth scrolling mode works well, although it's almost a little too aggressive. Smart-reel also triggers smooth scrolling very easily, so you'll probably want to make sure it's turned off when you're gaming.

The scroll wheel also supports side-to-side actuation for even more functionality, which can be customised in Synapse as well. This has introduced some noticeable lateral wobble, and rattling when shaking the mouse, although it didn't bother me too much. 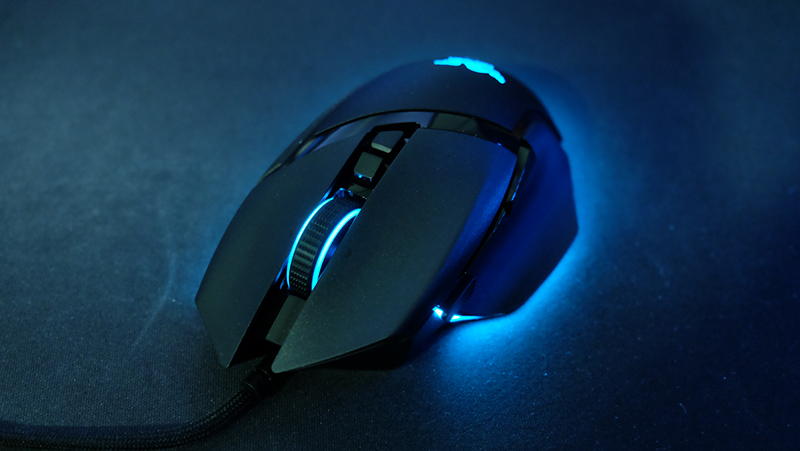 Build quality is otherwise really solid, with no flexing or creaking. The PTFE mouse feet are incredibly smooth, gliding impeccably right out of the box, and the soft paracord-style cable offers minimal cable drag. At 101g, this is not a mouse that's gunning for the ultra-light category, and it is more of an all-rounder than a gaming mouse with an esports focus. 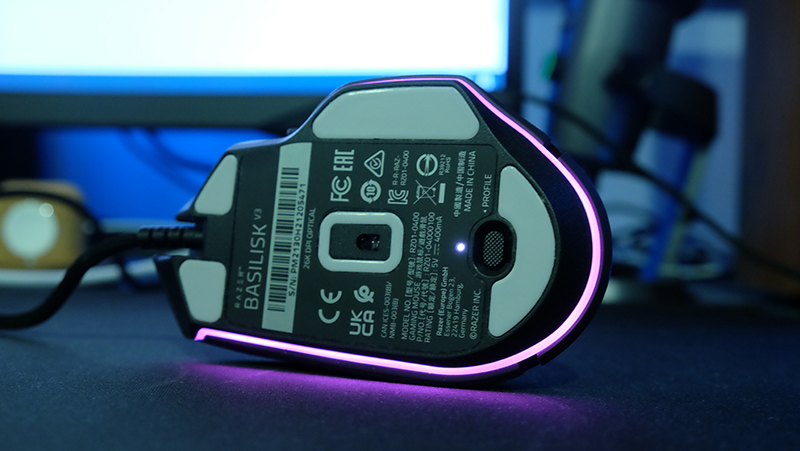 The mouse comes equipped with Razer's Focus+ 26,000DPI optical sensor, which tracks flawlessly. This is compared to 20,000 DPI from before, which was already ridiculously high. Elsewhere, the second-generation optical switches deliver crisp, responsive clicks, with minimal travel. The side buttons feel really good to press as well, and they don't sink in like many others tend to do.

Finally, RGB lighting on the mouse is stunning, particularly the light rail that encircles the mouse and creates a neat underglow effect. 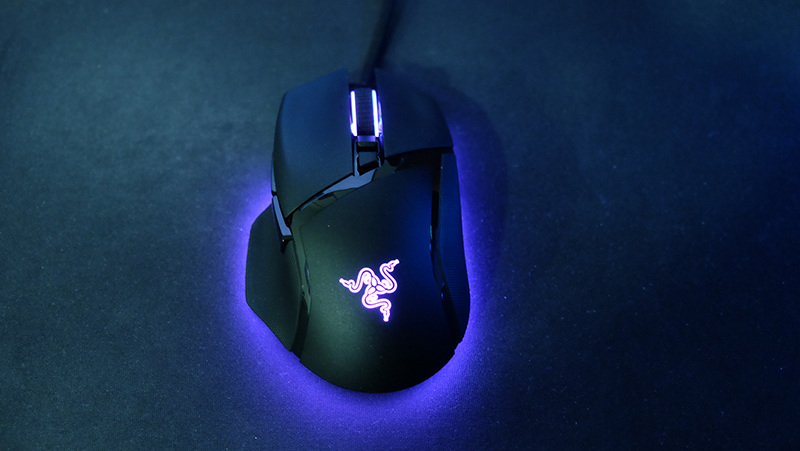 At S$109.90, the Basilisk V3 packs a lot of functionality into a modest price tag. With up to 11 programmable buttons, you can customise the mouse exactly the way you want. The scroll wheel also makes it unexpectedly good at productivity with its smart-reel feature and smooth scrolling.

If you have more specific grip styles that aren't the palm grip or even smaller hands, the Basilisk's V3 design may not be the best for you. It's also relatively heavy by today's standards. But this isn't a mouse designed for competitive gaming. Instead, the Basilisk V3 is a solid all-rounder for those who want a mouse for both work and play.

Write a Review
Compare This | Specifications
Wide range of customisation options with 11 programmable buttons
Unique HyperScroll wheel is great for long documents and other productivity functions
Versatile all-rounder
Flawless tracking
Thumb trigger is difficult to reach if you have smaller hands
Still quite heavy
Not the best for fingertip or claw grips
Our articles may contain affiliate links. If you buy through these links, we may earn a small commission.