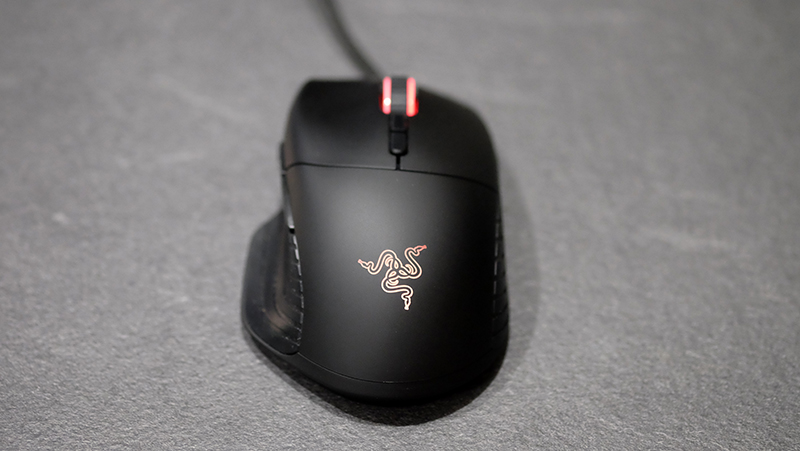 What makes a good FPS mouse? That probably depends on who you ask, but a reliable optical sensor and light weight would probably show up at the top of most people’s lists. Either way, Razer thinks it’s settled on the right formula with the Basilisk, its first mouse designed specifically for FPS gamers.

Here’s the interesting thing though - if you were to talk about an FPS mouse from Razer, most people would probably bring up the DeathAdder. That mouse has become a true classic and gone through multiple iterations, and it’s a favorite among e-sports gamers.

That said, the Basilisk looks like it might compete with the DeathAdder for overlapping audiences. It’s a fresh attempt from Razer at appealing to FPS gamers, and the spec sheet does look fairly promising.

The core of any gaming mouse is its sensor, and the Basilisk is outfitted with the excellent 16,000DPI PixArt PMW3389 optical sensor, the same one that's used in the Razer DeathAdder Elite and Lancehead Tournament Edition (I've reviewed the wireless version here). Razer calls this its 5G optical sensor, and it’s based on the popular PixArt PMW3360 sensor. A version of this sensor, the PMW3366, is also found in Logitech mice like the G Pro and G903, both of which I’ve had great experiences with. 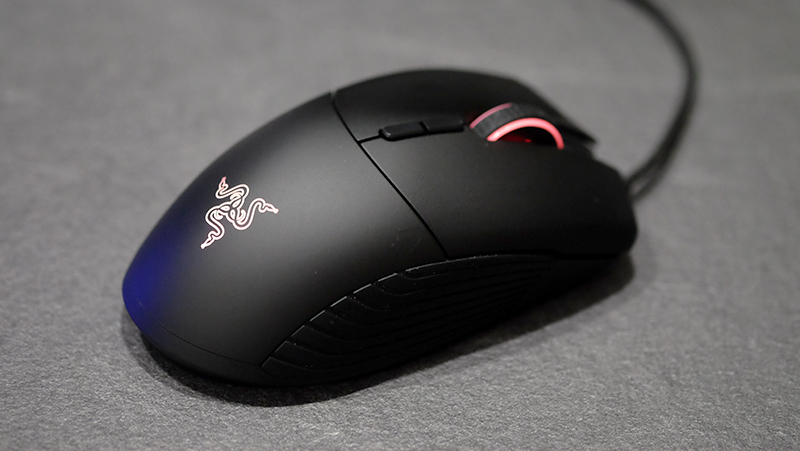 The PMW3389 has no inherent acceleration, jitter, or prediction algorithms, so it works great for FPS games where pinpoint accuracy is a must. This translates well into practice – I spent a few days with the mouse playing Overwatch and Destiny 2, and didn’t notice any issues with tracking accuracy. It handled quick flicks well, and I was never able to make the mouse “spin out”, which is what happens when the sensor loses track of where you’re pointing at.

You can tweak the sensitivity in 50DPI increments in Razer’s new Synapse 3 software, and the mouse supports up to five sensitivity stages. There’s onboard memory as well, so you can save up to four onboard profiles if you need to take the mouse out with you.

The Basilisk’s shape lends itself well to both palm and claw grips, but my hands are on the smaller side, so I naturally found the mouse more comfortable to palm. This is an ergonomic, right-handed mouse, and there is a helpful divot running down the left mouse button that guides your finger into place. A supporting wing at the side provides a comfortable resting place for your thumb, and I was able to adapt to the mouse pretty easily. 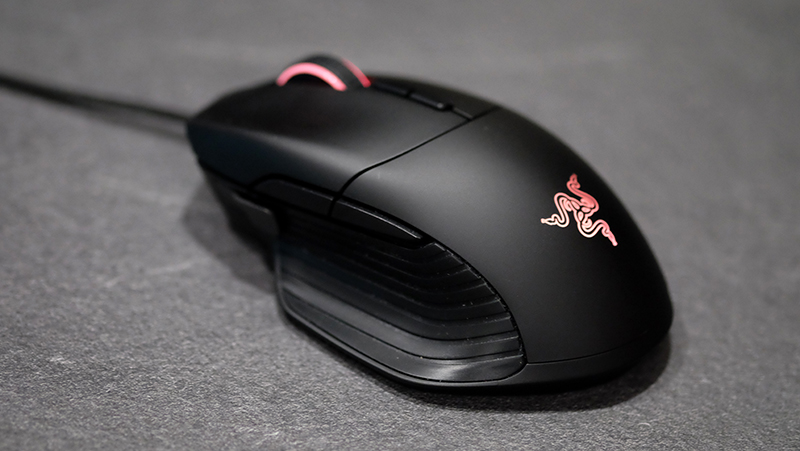 However, this design ultimately comes down to a matter of personal preference. The thumb rest does provide some additional support, but I can’t help but feel that these protrusions make the overall handling of the mouse a little less agile.

That aside, I like the smooth plastic surface of the mouse. Razer has left the days of glossy plastic and flaky matte coating behind it, and the latest crop of mice (the Basilisk included), all feel like they should resist the buildup of dirt and grime. The striated rubber grips on the sides are reminiscent of those on the Razer Lancehead, and they do a nice job of providing better purchase on the mouse.

There’s little to remark on what it comes to the mouse buttons. The left- and right-click buttons click satisfyingly, and the two side buttons don’t feel mushy either. The left and right mouse buttons are also separate from the main body of the mouse, and I find this approach enables more consistent and satisfying clicks. It’s also technically more durable, as the entire plastic shell doesn’t have to flex whenever you actuate the buttons. 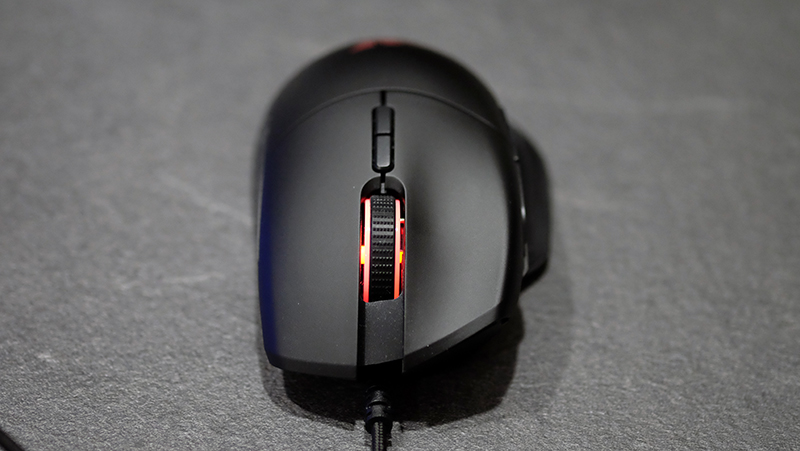 But what really deserves mention is the sniper button on the left, although it’s not really a button at all. Razer calls this a DPI “clutch”, and that’s because it takes the form of a small lever instead of a standard button. I still don’t think sniper buttons are that useful since many FPS games offer dedicated sensitivity settings when scoped in, but if you have use for one, the Basilisk’s implementation is probably among the best out there. 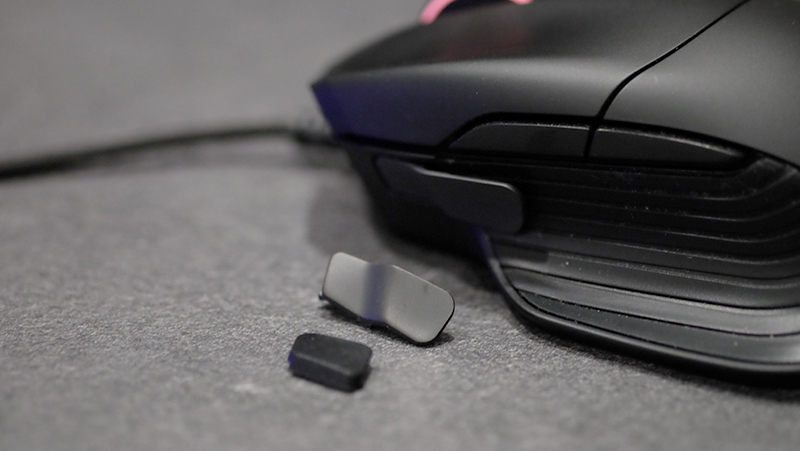 It’s a lever, so it’s a lot easier to press (physics!), and it feels less onerous to hold down. One of my biggest complaints with sniper buttons was that they always made it harder to control the mouse at exactly the moment when greater precision was required, and the Basilisk’s design mitigates this somewhat.

In addition, Razer thoughtfully included two different levers of different lengths to accommodate different hand sizes, which is a nice touch. Both levers are made of metal and feel super rigid. They also snap into place magnetically, and never did I feel like they were in danger of coming off. But if you’re like me and can’t see yourself ever using a sniper button, you can pop it off and cover it up with an included rubber plug.

The other standout feature is the scroll wheel, which lets you customize the level of resistance using a wheel at the bottom of the mouse. This is actually pretty useful, as I’ve accidentally nudged the scroll wheel on my Logitech G Pro and ended up switching weapons in the middle of a firefight.

The Basilisk lets you adjust the resistance of the scroll wheel, so you can opt for a heavier feel to avoid accidents. 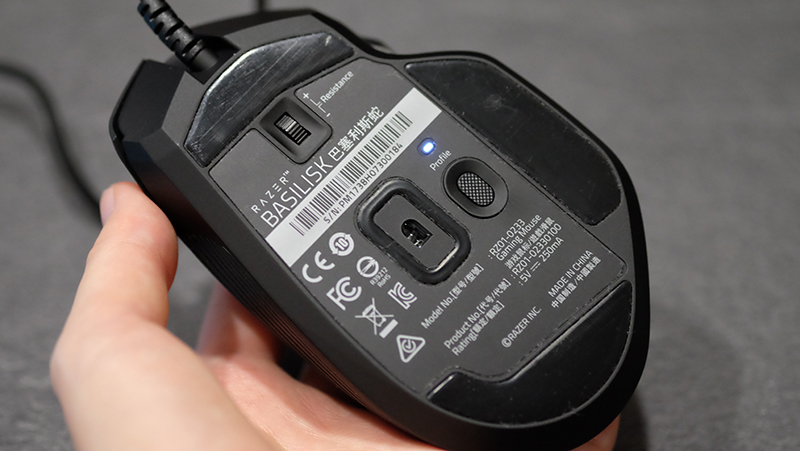 One final thing to note is the weight of the mouse. At 107g, this is still a little heavy for a wired mouse, especially one targeted at FPS gamers. Most competitive FPS players prefer something under 100g, so it’s slightly disappointing that Razer would neglect such an important characteristic of an FPS mouse.

Having said that, the S$109 Razer Basilisk is a solid, well-designed mouse for those who don’t plan to play competitively. It is comfortable and tracks impeccably, so there are really no performance issues you should worry about. The sniper button is also the best I’ve used so far, so this definitely deserves a look if you’re in the market for a right-handed mouse.

Write a Review
Compare This | Specifications
Thumb "clutch" is an excellent implementation of the sniper button
PixArt PMW3389 sensor tracks flawlessly
Comfortable design
Only for right-handers
A little heavy for an FPS-centric mouse at 107g
Our articles may contain affiliate links. If you buy through these links, we may earn a small commission.
Sponsored Links