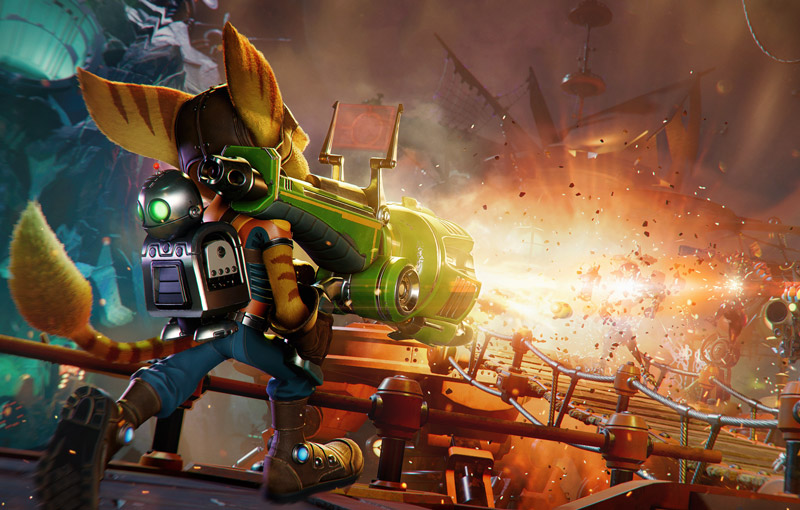 It took a lot of willpower to drag myself away from this game to write this review.

Ratchet & Clank: Rift Apart is Insomniac Games’ return to their beloved 19-year-old franchise, which has seen the titular Lombax and little robot blow evildoers up across a colourful variety of planets and timelines. Rift Apart seems like a natural next step for the franchise, taking players on a multidimensional adventure that feels welcoming enough for newcomers to love, but packed with callbacks for older fans to love even more.

I realise that it’s only been seven months since the PlayStation 5 launched, but this is undoubtedly the best game I have played on this console yet. With jaw-droppingly beautiful visuals, epic setpieces, lovable characters and an absolutely massive arsenal of weaponry, I challenge anyone to play Insomniac’s latest and not fall in love with it like I did.

Everything is canon now 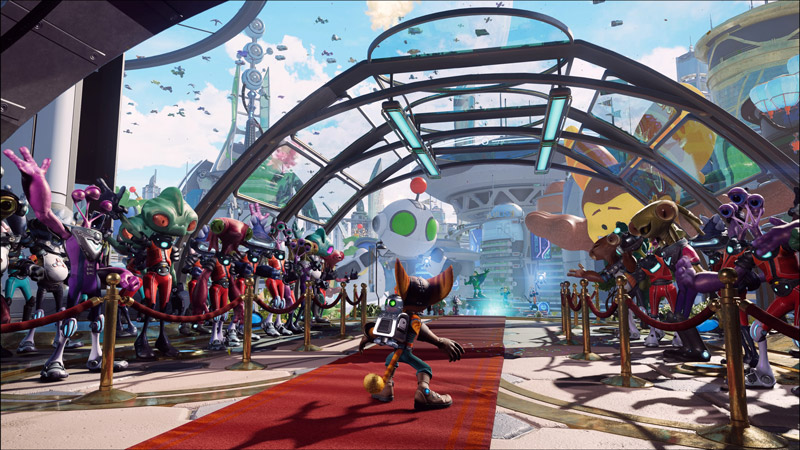 If you’ve played the franchise reboot Ratchet & Clank (2016) and happen to be confused on where this sequel rests in the new timeline, let me clear some things up. Rift Apart takes place quite a bit of time after the 2016 game. During this gap, the titular duo have gone on many adventures together - all of which seem to line up with the pre-reboot titles. Basically - everything is canon again, but as someone who didn’t play the first few games myself, the story never felt difficult to follow. A sequence at the start of the game sees Ratchet & Clank celebrated as heroes as they move through a parade recapping their many adventures, so you’re caught up on everything that matters quickly.

Of course, no parade of heroes would be complete without a gatecrashing villain, which brings us to Dr. Nefarious. The franchise baddie returns to nick a device that opens up portals to other dimensions, aptly named the Dimensionator - but subsequently breaks it, causing multiple dimensions to bleed into one another. Creatures and entire environments from other worlds fall into this one, causing mayhem across the board. The moment Ratchet and Clank realise that they have to fix the Dimensionator to undo all this multiversal damage however, they become separated in different dimensions. Nothing’s ever easy. 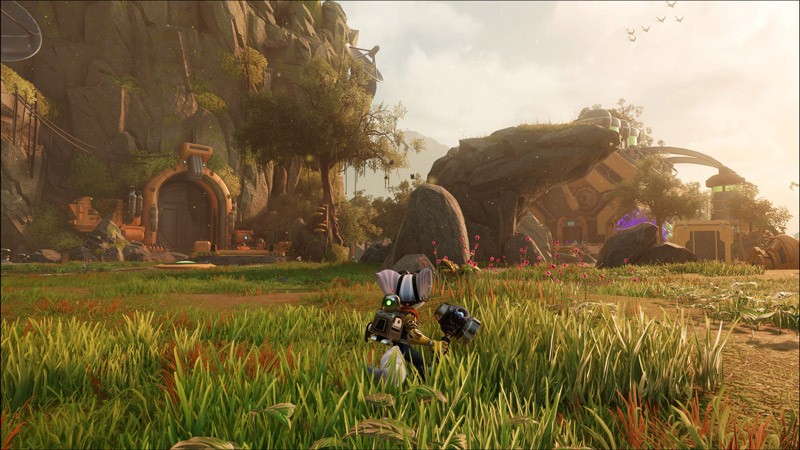 Rift Apart’s story campaign blows the 2016 reboot away by a hilarious degree. This is an absolutely massive game, rivalling Marvel’s Spider-Man in sheer scope and ambition. It’s not an open-world title (though parts of it come close), but its levels are rich in detail and the fractured multiverse serves as a convenient way for lots of enemy and environmental variety to get thrown into the mix. The story unfolds at a frantic pace, introducing new planets to explore and new characters to meet all the time - and even when you revisit older locations, they’re usually mixed up enough to make things interesting again.

The emotional depth of Spider-Man’s story is sorely missed here, but that fits in with the game’s more jovial, tongue-in-cheek tone anyway. There are a few heavy themes I wish we got more out of though, and the game frustratingly teases a key franchise mystery but never fully pays that off. Rift Apart also introduces a new playable Lombax hero: Rivet. While I don’t want to spoil anything about her inclusion, I will say that you don’t have to worry about Ratchet getting sidelined whatsoever. The two characters share the same pool of weapons and abilities, but you’ll switch between them throughout the story as they traverse different planets.

Both perspectives are well-balanced however, and Rivet wastes no time in becoming a fun and lovable addition to this universe. I’d happily fork up for a Miles Morales-style spin-off featuring her - and certain other spoilerific characters - anytime.

This game is unbelievably pretty 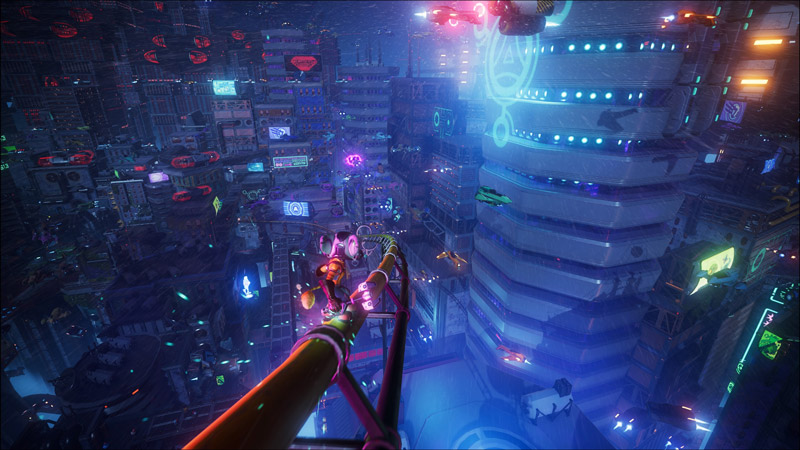 Rift Apart follows the standard Ratchet & Clank formula. There’s a big bad out there on the verge of breaking the universe, and our heroic duo set off to stop them as violently as possible. The story takes you from one planet to another, and you can usually choose which location to tackle first - so you never feel like you’re stuck on a tight, linear path forward. Even within those planets are huge levels with sidequests to complete and collectibles to find, as long as you’re willing to go out of your way to look for them.

I finished the game at 90% completion - having foregone a quest or two in the interest of time - but Insomniac did a spectacular job at making exploration feel worthwhile in these locations. One planet in particular, Savali, is huge in scope and littered with points of interest you wouldn’t find unless you poked around outside the main objective. You can go straight from point A to point B and finish the story campaign very quickly without exploring, sure, but you’d miss out on some really cool stuff - like a massive pirate ship suspended in a cave, or a trainwreck filled with goodies.

Gold Bolts also make a return and seeking them out is quite worthwhile, as each one provides cosmetic skins, cheat code-like extras, multiple rendering modes and more. My personal favourite lets you turn bolt pick-ups into Overcharge cans from Sunset Overdrive, fizzy sound effects and all! Interdimensional rifts also manifest in gameplay in many different ways. You’ll occasionally find a pocket dimension housing armour pods, which not only change Ratchet and Rivet’s appearance, but also provide gameplay perks. Platforming is a lot more interesting and fast-paced now, letting you chain together new movement abilities like grappling, dashing and opening up rifts to find a path forward. With all these new methods of traversal, you can imagine how much fun it is getting around combat arenas as well. 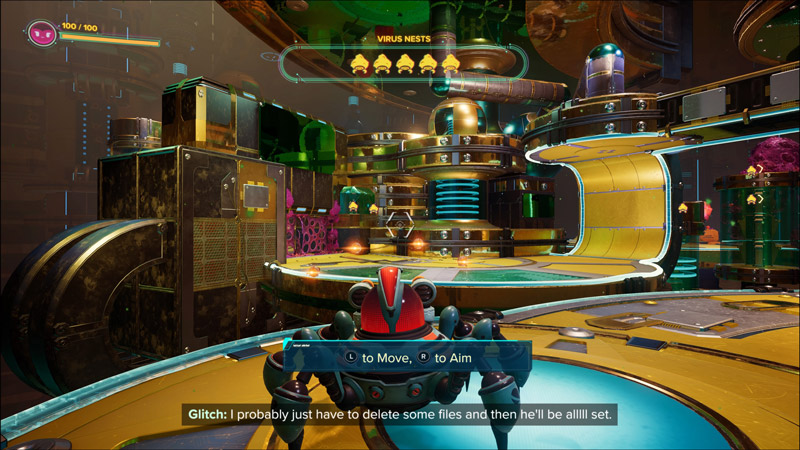 The only real downers in this story campaign are the Clank puzzles and Glitch segments. Your adventures as Ratchet and Rivet will occasionally be interrupted by puzzle levels where you play as Clank. The little robot has to create a path forward for other versions of himself across a series of assembly lines, using little orbs that make them go faster, lift them into the air or make them heavier. Whenever Ratchet has to deal with some malfunctioning piece of technology, he will also deploy Glitch - a little robot that shoots lasers and rockets to terminate bugs in digital environments.

I don’t think I ever encountered a single Clank or Glitch level and thought, “Oh, fun! One of these again!” I get the reasoning behind the Clank segments at least - he’s in the title, after all - but these always felt like really boring detours from everything fun Rift Apart had to offer. To be fair though, the game does give you an option to skip the Clank puzzles if you'd like.

You point. You shoot. What could go wrong? 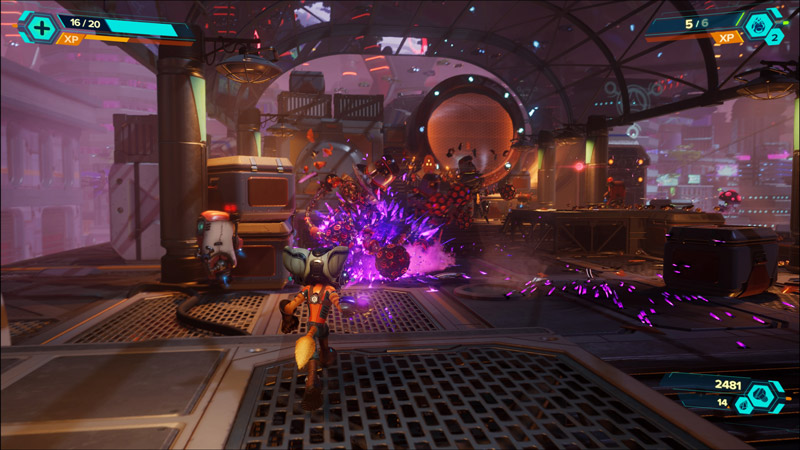 Ratchet & Clank games are well-known for equipping players with a big ol’ locker of eccentric weapons before flinging waves of goons at them - but this is easily the best iteration of that formula yet. If I’m not mistaken, Rift Apart contains almost twice the amount of guns Ratchet had in the 2016 reboot, and it doubles down on making each weapon feel incredible to use while being distinct from one another. As you battle enemies, you’ll also earn XP to level each weapon up to Level 5, and each level unlocks new upgrade tiers at Mrs. Zurkon’s weapon shop. Via a honeycomb-like menu, you’ll unlock special perks that can radically improve how a weapon feels in combat, using Raritanium you get from exploring.

I didn’t even have time to pick a favourite weapon in my first playthrough, because I was constantly hopping from one to the next in a mad dash to max them all out. Still, it’s impressive that so few of them feel out of place or less interesting to use than their more explosive siblings. Some weapons even let loose little robotic/fungal minions that do the fighting for you, which can result in some truly chaotic fights going down later in the game with tons of enemies, friendlies and particle effects blowing up onscreen like multicoloured fireworks. Third-person shooting has never felt so satisfying. 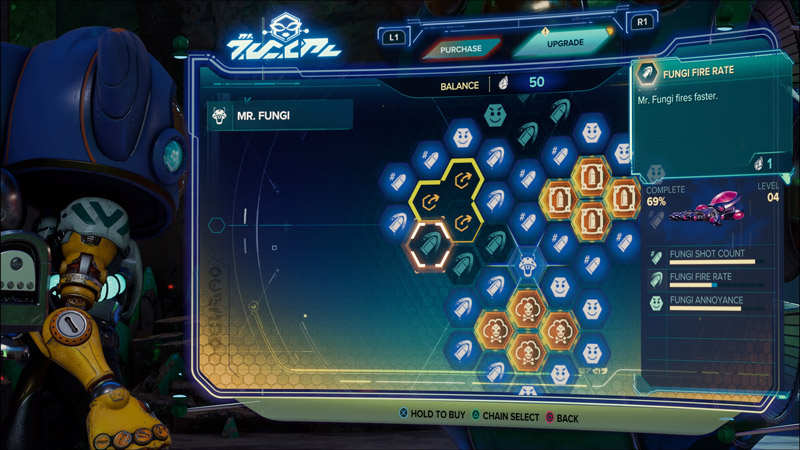 The DualSense is well-implemented in all this, with haptic feedback and adaptive triggers working in tandem to deepen the impact of every trigger pulled and every bolt collected. Fast-loading lets you jump between dimensions at incredible speed, and real-time ray tracing bolsters the already gorgeous visual design of Rift Apart’s locations. I can’t tell you how many times I hopped into Photo Mode just to spin the camera around a level and check out all its little details.

I played this game on a pre-Day One patch, but it’s worth mentioning that I bumped into a couple bugs in my first playthrough. During platforming, I would occasionally find myself in places I clearly wasn’t meant to be, and end up stuck in a weird ‘falling’ animation until I found a way out. I ran into some ugly lava textures on a mining planet, which looked hilarious compared to the gorgeous environments surrounding them. A couple of levels wouldn’t progress because enemies got stuck behind walls or simply wouldn’t attack, hidden out of view. I had to restart at the last checkpoint a bunch of times to get past those hidden enemies. Insomniac is aware of these issues and plans to add more polish with a Day One patch, so hopefully all of this gets fixed before you get your hands on the game. 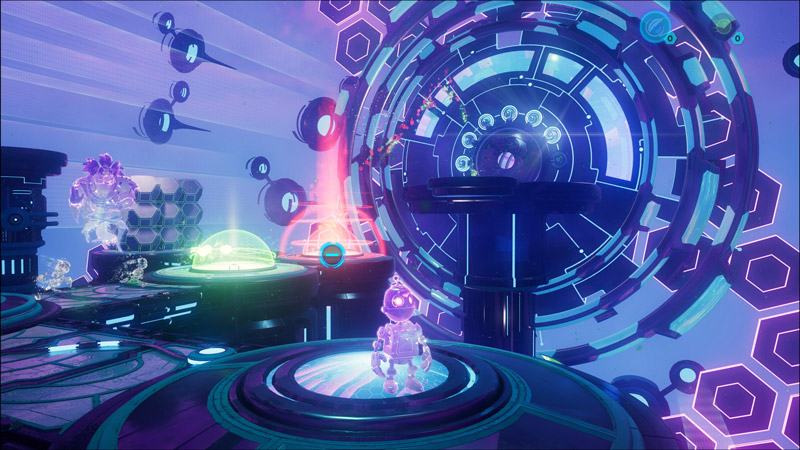 Ratchet & Clank: Rift Apart is undoubtedly one of the most beautiful games I have ever played, and it’s insane fun on top of that. Ratchet’s arsenal is massive and full of personality, with weapons that either belt out ricocheting buzzsaws or turn enemies into lush topiaries. Coupled with new platforming gadgets and fluid combat arenas, beating back waves of pirates, goons, and pirate goons has never been more fun. The story campaign is a fast-paced adventure that drops Ratchet and Clank into jaw-dropping new locales, and it all culminates in a massive action-packed finale.

If you weren’t a Ratchet & Clank fan before, you’re about to be.

Write a Review
Compare This | Specifications
Gorgeous environments, great level design, insane setpieces
Fantastic third-person shooting
Great new characters
Bombastic finale
Huge array of weaponry gained at a constant pace
Clank puzzles
Glitch segments
The story never dwells on what should be big, emotional moments for too long
Our articles may contain affiliate links. If you buy through these links, we may earn a small commission.
Sponsored Links