Raji: An Ancient Epic is a refreshing take on the mythological fantasy canvas

Give it a shot! 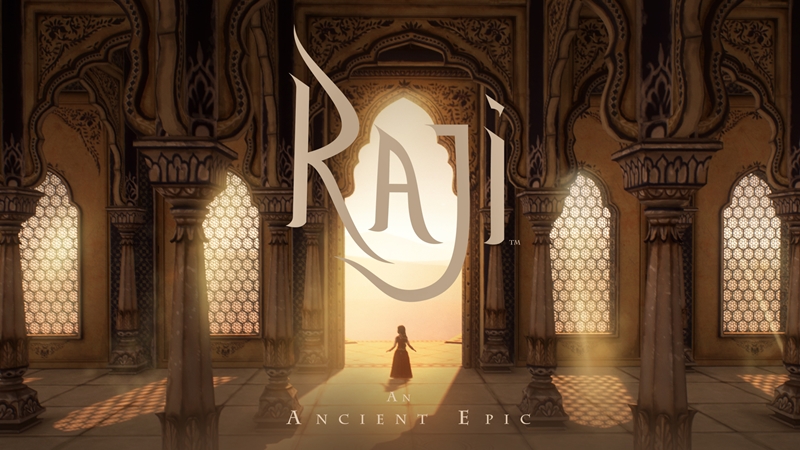 As far as mythological fantasy games are concerned, I think we've already seen enough of the usual candidates. We've been to Greece and Norway with God of War, explored Egypt with Assassin's Creed: Origins and even paid Japan a visit with NiOh 2, among various others.

Speaking of NiOh, apart from Japan and China, Asian mythology tends to be "the road less travelled" among many developers these days, which is partly why Raji: An Ancient Epic brings a real breath of fresh air into this beloved subset of gaming. Nodding Heads Games' debut title is an action-adventure RPG based on Indian mythology, and in an era where developers chase for greater and greater degrees of player immersion in their titles, Raji's simplicity is actually one of its most charming attributes. 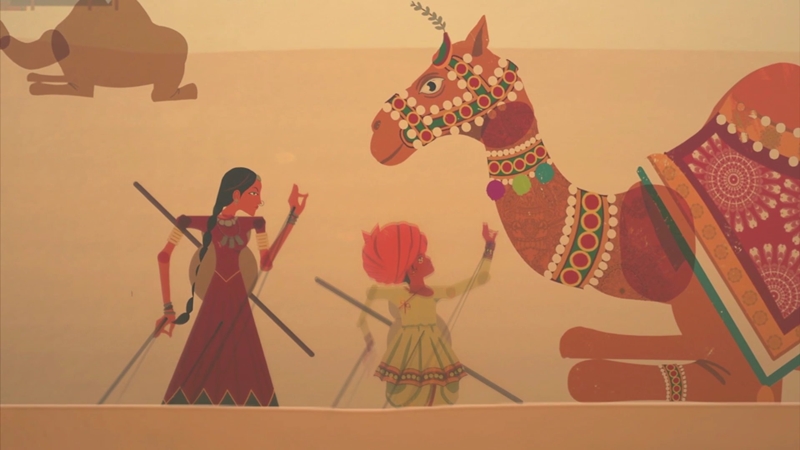 The narrative in Raji, which the developers say was influenced by real Indian epics like the Ramayana and the Mahabharata, has a simple premise. It follows the adventure of a young Indian girl, the titular Raji as she attempts to rescue her brother Golu from the clutches of demons. Of course, she can't do much on her own, which is why some of the divinities from the Indian pantheon decide to lend her weaponry and assistance. On top of that, some of the deities, like Durga and Vishnu also function as "narrators", laying out Raji's tale and spicing it up with occasional banter as well as additional information about other key deities like Shiva .

Granted, this might all seem like textbook stuff at first glance, but it definitely works. Of course, Raji isn't all copy-and-paste - it throws in its own twist by depicting many of the important cutscenes via puppetry, as an additional (and very welcome) nod to its cultural background. 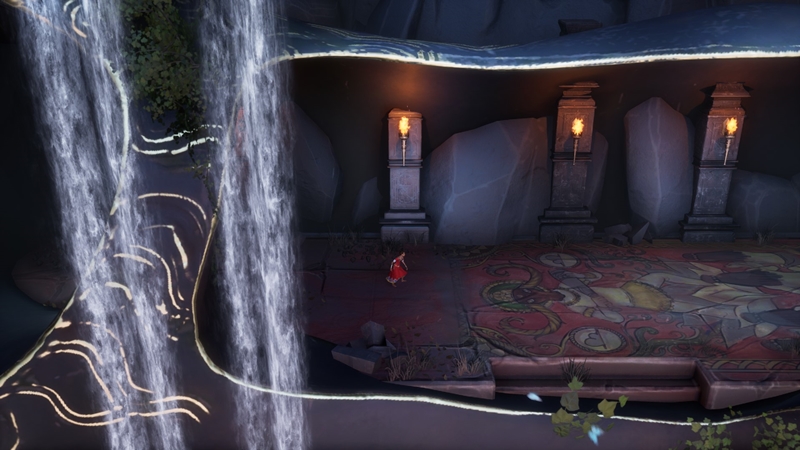 Cutscenes aside, Raji's main aesthetics package is also quite pleasing and easy on the eyes, featuring rather minimalist designs with just enough detail to make it appealing. However, if there's any aspect that really stands out here, it would be the numerous beautiful murals and statues that line the levels. Coupled with the aforementioned storytelling by Durga and Vishnu, Raji presents a game package that's nothing if not authentic, which is only enhanced by its other aspects, such as combat. 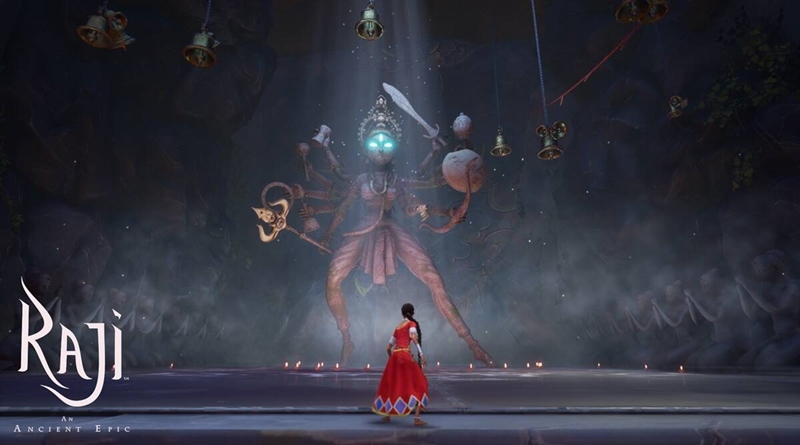 Before we discuss the fighting bits in greater detail, I must admit that Raji's combat managed to sucker-punch me in a number of ways. For starters, I wasn't expecting the game to feature a vertical aspect here - not only is Raji able to dodge enemy attacks by making conventional rolls and suchlike, but she's also able to execute attacks by leaping off walls and swinging around pillars too.

Needless to say, this is marvellously helpful, especially if you're caught with your pants down and are surrounded by demons. Executing a walljump here gets you some breathing room, and it even makes sense lore-wise given Raji's proficiency as an acrobat - in my opinion, it's a very good display of foresight from the developers' end. 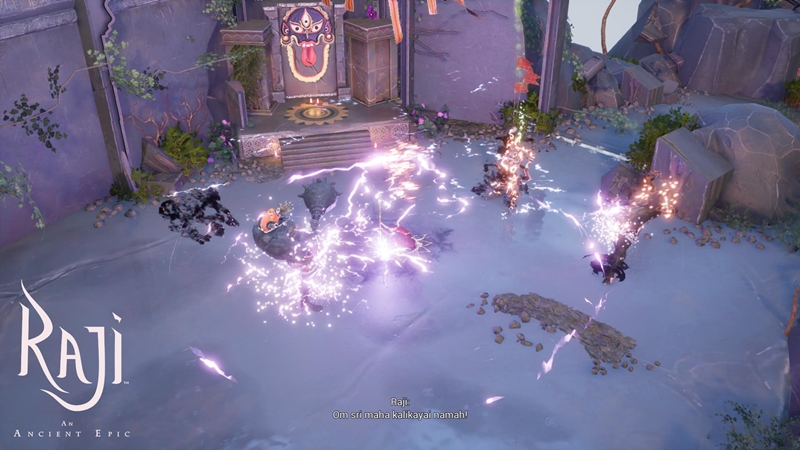 Then there are the combos and "finishers". The former is basically what it says on the box - Raji's light and heavy attacks with the Trishul spear are mapped to the left and right mouse buttons respectively, and like many RPG titles, you'll have to account for animation delays when you're planning an attack. As for the latter, Raji takes a page out of the Darksiders formula here - you'll be able to deal demons a special finishing blow when their health gets low enough, and if I'm not mistaken, this technique often yields Raji's equivalent of health potions too, which should help you get through tougher fights.

Last but not least, we have the enemies, and make no mistake: they are NOT pushovers. For a game whose primary focus is its story, the fighting is surprisingly brutal and some of the bosses can be pretty difficult. Timing your attacks properly is key, and in some ways, Raji is even more challenging than its peers in the action-adventure genre. For example, there's no character upgrade and equipment system in Raji, although you could say that it's both a boon and a bane simultaneously. 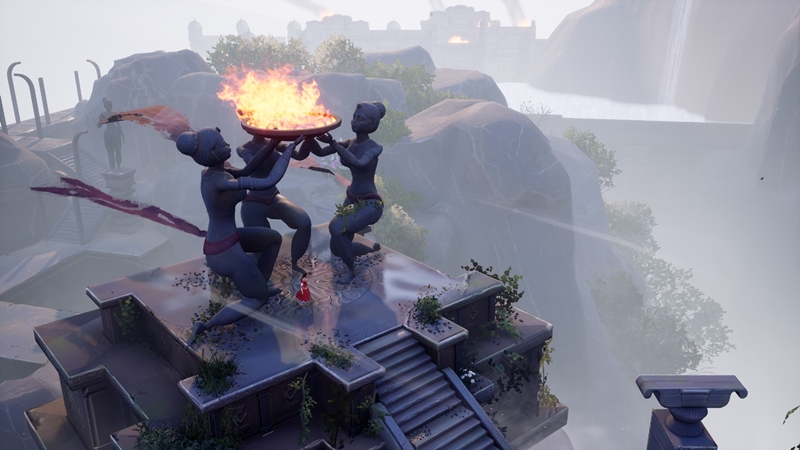 Specifically, it's a good thing in the sense that you don't have to pore over item stats and synergies like you would in games such as Diablo III, and as such can focus more on enjoying the story, which is what the game emphasises anyway. However, that simply means problems might surface in another form, namely a lack of variety and long-term gameplay incentives.

Given that there are no "alternative playstyles" or "moral choices" in Raji, every playthrough is going to be pretty much the same as the last one. In other words, this means that Raji is essentially a one-and-done game - you'll go through it once to enjoy the story and kill a few demons, and that's about all you're ever going to do with it.

Even so, I guess you could say that Raji is exceptionally well done for a studio's debut title, not to mention that adding DLC content would ruin the story outright. However, i can't help but feel like having only a single weapon is a waste of such a dynamic combat system. Perhaps it's just me, but I think it would have been interesting to see Raji wield a sword or bow in addition to a spear.

All the other odds and ends 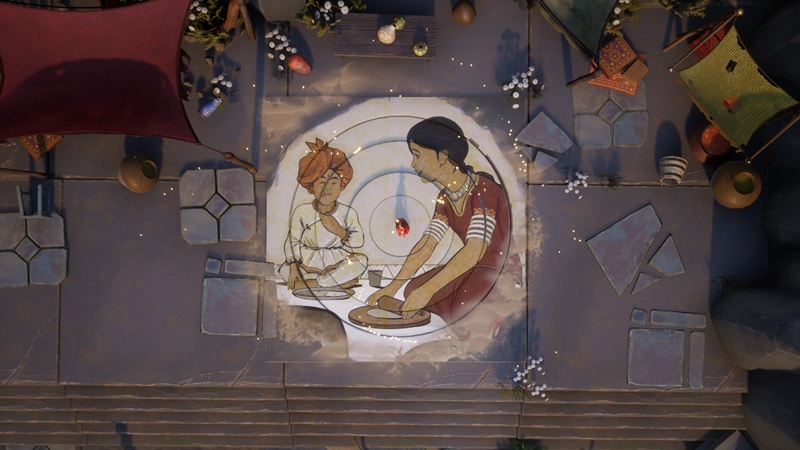 Finally, the other half of Raji's gameplay consists of its traversal and puzzles, which mainly involves navigating cliffs and ledges and solving interesting puzzles like the one shown above. It's not Assassin's Creed either - there's no need for stealth and such. To be honest, most of the time you won't really be paying attention to the puzzles as much as the environments, which feel tranquil and majestic.

Of course, there are two other miscellaneous interactions to check out. The first of these are the special shrines to Durga's sister deity Kali, which is essentially your conventional bonus challenge. All you have to do is defeat all the enemies within that bounded zone to unlock a special bonus for Raji, such as a new attack.

The second interaction is much more intriguing by far, and I particularly like this inclusion because it greatly boosts the authenticity of Raji's gameplay experience. Along the way, you'll often come across murals which you can interact with, which prompts Durga or Vishnu to detail more about the story's characters. For example, one mural has Vishnu explaining how Durga came to be born after a powerful buffalo demon attempted to take over the realm of the gods - it's pretty interesting stuff. 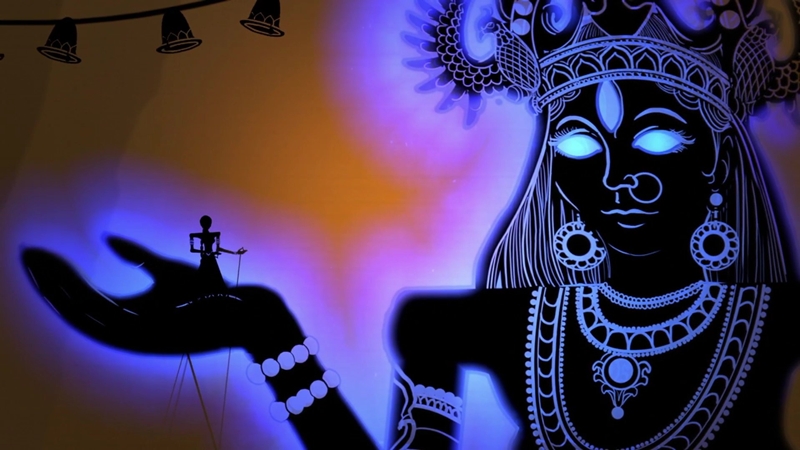 As you might have guessed by now, I'm giving Raji: An Ancient Epic a pretty high score. While I do admit that the game is somewhat lacking in weapon variety and long-term appeal, the first playthrough experience is without a doubt, amazingly engaging and yet surprisingly crisp. On top of that, Nodding Heads Games has also managed to achieve an excellent balance between combat, puzzles and exploration - a difficult line to toe even for veteran game studios, and they've managed to do it on their first game to boot.

That's all well and good, of course, but I still think Raji's best and most outstanding characteristic lies in its undiluted authenticity - the game is practically overflowing with mythological references, and yet you can tell that there's a great deal of respect and reverence at its core. As such, I wouldn't exactly say Raji is a game - it's more like a celebration of Indian culture, religion and tradition, and needless to say, everyone's invited to this festival.

Write a Review
Has a very unique and authentic flavour
Aesthetics are appealing, not overly detailed and easy on the eyes
Surprisingly dynamic combat system
Lots of interesting trivia and puzzles
No long-term playability beyond the first clear
Lack of weapon variety
Jumping off cliffs by accident
Our articles may contain affiliate links. If you buy through these links, we may earn a small commission.
Sponsored Links