An Excellent NAS Box for the Home. 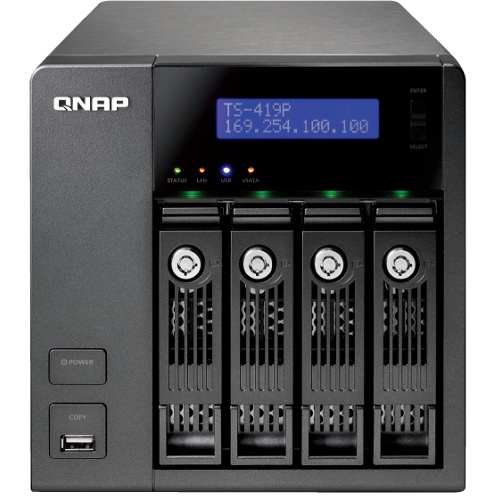 If the QNAP TS-419P II looks somewhat familiar to you, that’s because it’s really the TS-419P+, but with a faster processor. While the latter came with a Marvell 6282 1.6GHz processor, the former comes with a 2.0GHz chip from the same line. Otherwise, almost everything else in terms of hardware specifications remain the same - from the 512MB of DDR2 memory on-board, to the four USB 2.0 and two eSATA ports, as well as dual gigabit Ethernet jacks which support load-balancing as well as link-aggregation.

Externally, the TS-419P II is quite compact given that it has space for four drive bays. The four drive bays mean you can throw in anything from 3.5-inch to 2.5-inch SATA2 disk drives, with the latest 3TB hard drives already on the compatibility list, for a potential top-end storage capacity of a whopping 12TB in total. While there’s no door to hide the drive bays from view, installing the four hard drives is simple: just unlatch the individual racks and screw on your hard drives.

As mentioned previously, you have both USB and eSATA ports for added external storage, though it must be noted that external drives don’t have any power management to spin them down after extended periods of inactivity (the internal drives do spin down to save power, of course). One USB port is front-mounted, inside a handy button which also initiates data copy to or from connected USB storage. The USB ports can also be used to hook up printers for sharing across the network, though support for multifunction printers is out of the question at the moment.

The external 2-line LCD does come in handy for quick viewing of any error messages that may pop up, or for useful bits of information such as the IP addresses of the NAS (network-attached storage), as well as how much storage is left.

Benchmarking with the Intel NAS Performance toolkit produced HD Video playback and record scores of 49MB/s and 8.8MB/s respectively, while the content creation and office productivity tests resulted in 3.6MB/s and 5.5MB/s each. File transfer tests to and from the NAS averaged 6.6MB/s and 38.5MB/s respectively, while directory copying to and fro averaged 3.4MB/s and 8.6MB/s each.

At the end of the day, the TS-419P II is a little bit of a mixed bag. On one hand, the feature set is superb. Take away the cheaper Marvell processor, and this NAS has features that rival that of high-end SMB NAS boxes. While its performance is admittedly a few steps behind other NAS solutions powered by much faster Intel Atom processors, it is by no means a slow and sluggish NAS. (For those interested, do check out our reviews of the 5-bay Thecus N5200XXX and the affordable 4-bay Synology DiskStation DS411j.) QNAP’s management software too, has improved by leaps and bounds in recent years, being very easy to use and administer to. Overall, if you don’t mind slower disk transfer rates, this is one NAS to consider for the SOHO or home setup.