The Promise of HD Graphics

The Promise of HD Graphics

2009 was supposed to be the year we got the first processor with an integrated graphics core on the chip package itself. Sort of like what AMD promised way back in 2008 for its Fusion initiative. Things however did not go according to the roadmap and we have been informed that it won't be till 2011 before Fusion becomes reality.

Unfortunately for AMD, its vision of a processing unit merging the CPU and GPU has now become reality for its biggest rival, Intel. Broadly speaking of course, since AMD's implementation of Fusion could very well differ greatly from what Intel is launching today. But the idea of integrating a graphics core with the processor, and not onto the motherboard as is traditionally done, is the same, at least from the consumer's point of view.

In fact, even Intel was promising this integration in 2009, with Havendale the codename for this family of processors, which would be based on Intel's current Nehalem CPU architecture. However, the company decided that its shift to 32nm production was moving along so well that it could afford to skip the 45nm Havendale and jump directly to its successor, codenamed Clarkdale.

That leads us up to today's launch of six new desktop models in the Clarkdale family. (Intel is releasing new mobile processors based on the same 32nm technology called Arrandale at the same time). All of them are dual-core processors using the LGA1156 socket and thus, even more so than the previous Lynnfield, CPU launch, are squarely targeted at the mainstream and business users. Like Lynnfield, these processors are equipped with Turbo Boost that will increase the processor clock speeds by quite a few bumps when dealing with applications
that are unable to use the full complement of processor cores. The Core i5 series of these Clarkdale processors also comes with HyperThreading to better deal with today's more multi-threaded environment. Below are the new models announced and some of their more relevant specifications.

As you may have noticed, while these processors are quite similar to Lynnfield (same amount of L3 cache per core, memory support and Turbo Boost), the integrated graphics core differentiates the two. Intel may have managed to shrink the processor core to 32nm, but the graphics, memory and the PCIe controllers (remember, since Lynnfield, they are now integrated with the processor cores) are still on a 45nm process. Therefore, if you ever peel open the Clarkdale processor's heat spreader package, you'll find two distinct dies as shown below: 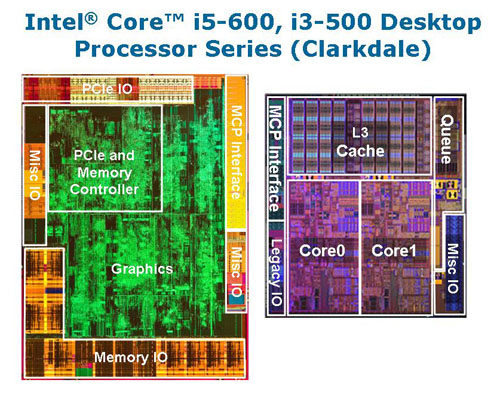 So what are the advantages of having the graphics core integrated with the processor? The main issue here is cost, as according to Intel, moving from the three-chip package solution of the previous Intel architecture (CPU with Northbridge and Southbridge) to the two-chip package (CPU and Platform Control Hub) means a 30% savings in terms of the package area, which translates
into reduced manufacturing costs.

The other issue here, power savings, has more to do with the 32nm manufacturing process used for the processor component in the Clarkdale. For those who are counting, the graphics portion too benefits from going to 45nm since the previous X4500 series integrated graphics core on the G45 chipset for instance was built using a 65nm process. So it's likely that we'll see significant power savings with these new processors, especially when the maximum TDP rating for these new models is just 87W.

Finally, these new processors all come with a new x86 instruction set meant to improve the encryption/decryption speed for AES. Applications which benefit from the new instructions include file encryption utilities like Windows
' BitLocker.

For the review, we got the Core i5-661 from Intel. It appears to be the only model out of the six to have a 900MHz graphics core clock speed, which also means a higher TDP rating. Besides that, it is identical to the Core i5-660, except for some differences in features (the 661 lacks Intel vPro and VT-d support for instance). Both are priced at the same US$196 for 1k units so it appears that the 661 is the better deal for raw performance. Before we move on to the new Intel H55 Express chipset that supports these new Clarkdale processors, here is the CPU-Z info: