Building on the momentum of its new products from its burgeoning Gaming series, MSI has stepped up to share its upcoming Z87-GD65 Gaming board that features the new and upcoming Intel Z87 chipset, with support for next-generation Intel Core "Haswell" processors. 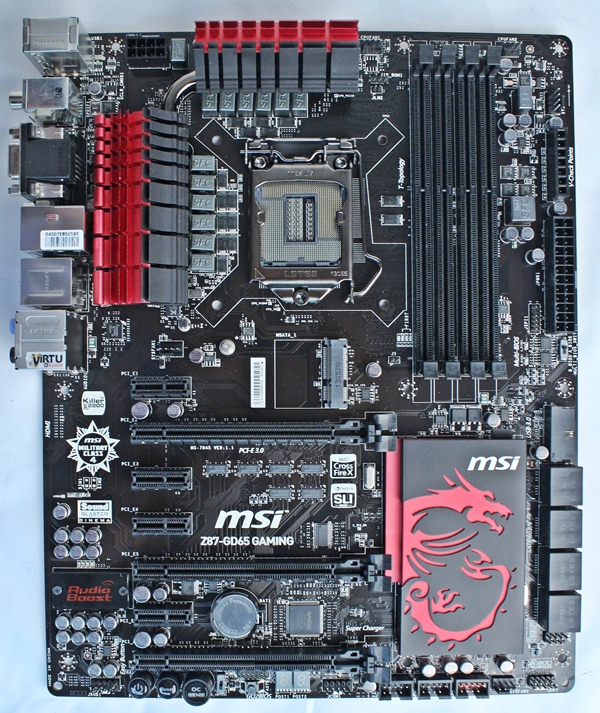 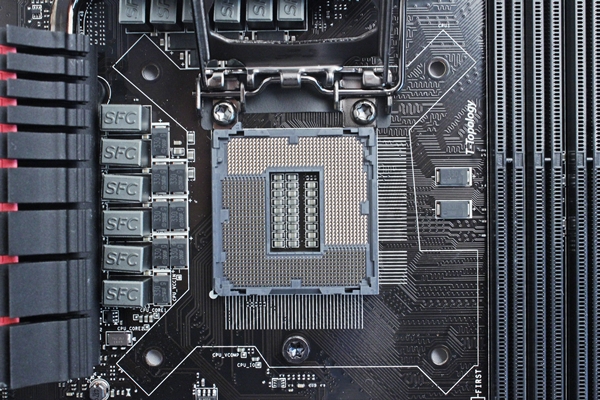 The other feature is the new chipset's support for up to six USB 3.0 ports (two more than Intel Z77). Seeing that there are up to 14 total USB ports traditionally supported by existing and previous chipsets, it's quite likely that the Intel Z87 boards will now have a default configuration of six USB 3.0 and eight USB 2.0 ports. Better yet, there will be no fixed USB speed assignment tied to any particular physical port serviced by the Z87 chipset thanks to Intel I/O Port Flexibility technology, which supposedly allows you to configure which of the USB ports from the chipset run at USB 2.0 or USB 3.0 speeds. With this flexibility and increased USB 3.0 port support, there's much lower need for motherboard vendors to integrate an additional third-party USB controller in their board designs. And this is exactly the case with the MSI Z87 Gaming board.

At this point of time, that's about all we can share of the upcoming Intel Z87 chipset, so we'll have to wait till a month later before more can be revealed. Such technical differences not withstanding, the new board bears an uncanny resemblance to its Z77 predecessor that we reviewed recently. So let's delve deeper to ascertain what are their not-so obvious differences.

The board features upgraded Military Class IV components but currently, we don't have any more technical details about its new components but it is safe to assume that it's still made up of the usual Hi-c capacitors (Hi-C Cap), super ferrite chokes (SFC), along with solid capacitors (Solid Caps) and MOSFETs. We'll have to wait for more information from MSI on what has changed in this Military Class IV. 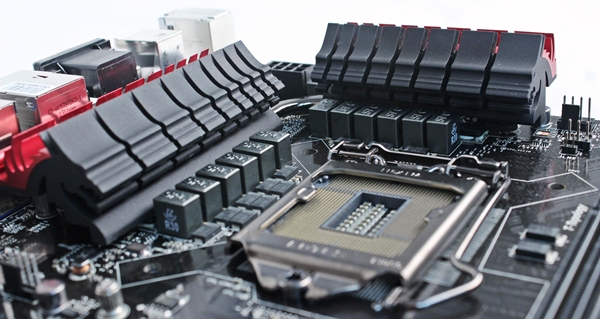 To the left of the LGA1150 CPU socket, there is a mSATA slot to insert a compliant solid state drive (SSD) near the first PCIe x16 expansion slot. Speaking of PEG sots, there are three of them in total, along with four PCIe 2.0 x1 slots. 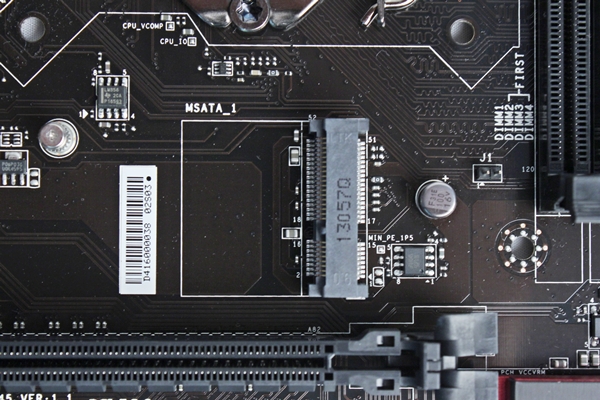 The layout of the expansion slots are almost identical to the MSI Z77A-GD65 Gaming board. The fourth generation Intel Core 'Haswell' processor still supports 16 PCIe lanes, which are rated at PCIe 3.0 speeds. If the first PCIe x 16 slot is installed with a single graphics card, it will get to enjoy the full bandwidth of the 16 lanes. If the second slot is also installed with another card, the lanes would be evenly split between the two occupied PEG slots; with each slot allocated the bandwidth of 8 lanes. Once the gamer installs cards in all the slots, the first PEG slot still enjoys the 8-lane bandwidth; however the remaining pair has to share the remaining lanes equally, giving them only a bandwidth of 4 lanes each. 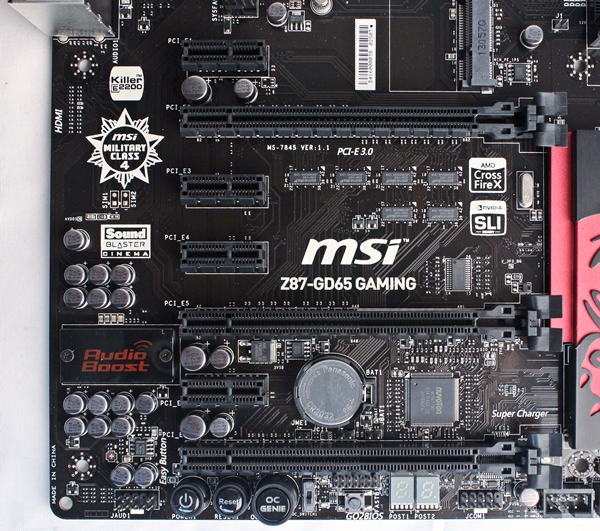 As we move beyond the last PCIe x16 expansion slot to the bottom edge of the motherboard, we locate the three onboard control buttons (Easy Button 3); they have been moved from their usual position near the DIMM slots to their new current position. Compared to their older counterparts such as the MSI Z77A-GD65 Gaming board, the new position is a slight improvement but not any more inconvenient once the board is installed within a chassis. As long the third PEG slot remains unused (which is quite likely), these controls remain accessible. The OC Genie button now activates the OC Genie IV feature of the board that essentially still provides a one-touch overclocking solution; however, this feature has been updated to work in tandem with a DIP switch next to the OC Genie button that controls the OC Genie's overclocking mode. 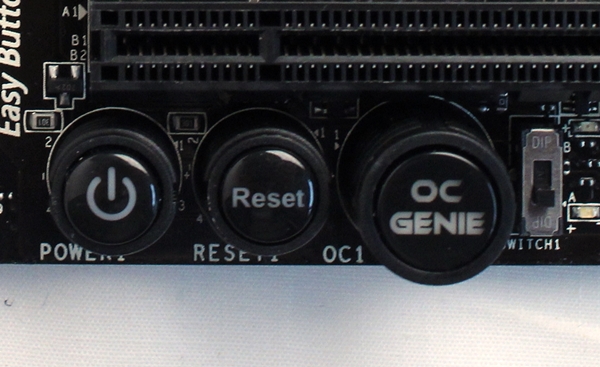 To the right of the DIP switch is the Go2BIOS button that will allow us to enter the BIOS setup if we enabled the "MSI Fast Boot" feature in the BIOS. To better understand the reason for this button, MSI's Fast Boot feature disables the keyboard during POST, thus making it impossible to enter the BIOS setup by pressing the Del key. For POST diagnostics, the Debug Code LED segment is just next to the Go2BIOS button.

The End of  SATA 3Gbps Connectors? 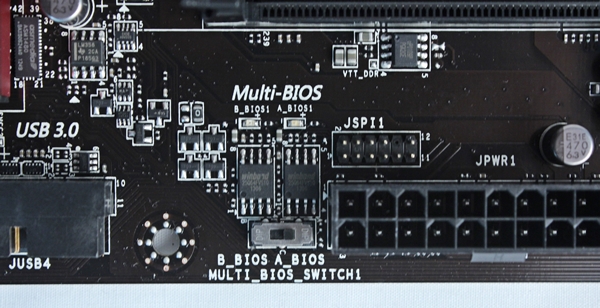 The usual suspects located to the right of the BIOS switch are the ATX power connector and the V-Check connectors to monitor voltage of various components in real-time. 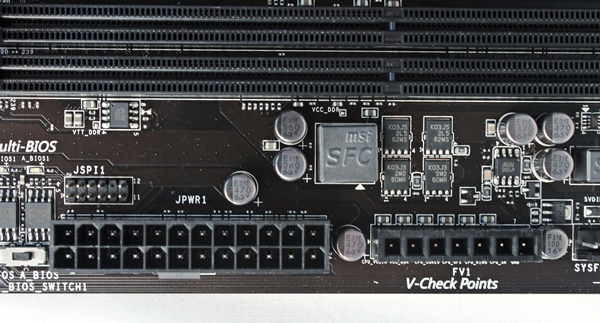 Next, we move on to the rear I/O connectors. There is two pairs of USB 3.0 ports here as well as the regular fixation PS/2 keyboard/mouse gaming port (optimized for high polling rates) and two more regular USB 2.0 ports. Located next to that stack is the tiny, black clear CMOS button. The LAN port, which has been colored red this time, is powered by the board's Killer E2205 Gigabit chip. From our experience with the Killer Gaming network controller, we've found a slight tangible improvement in latency performance. Further to that, there is an onboard Realtek ALC1150 audio chip that powers the audio options of the board with support for Creative Sound Blaster Cinema (and more info here). Apparently, MSI claims that the aural experience provided by the audio system has been enhanced with golden audio ports (as seen below in the stack of audio jacks), coupled with EMI shielding for the Realtek CODEC chip. 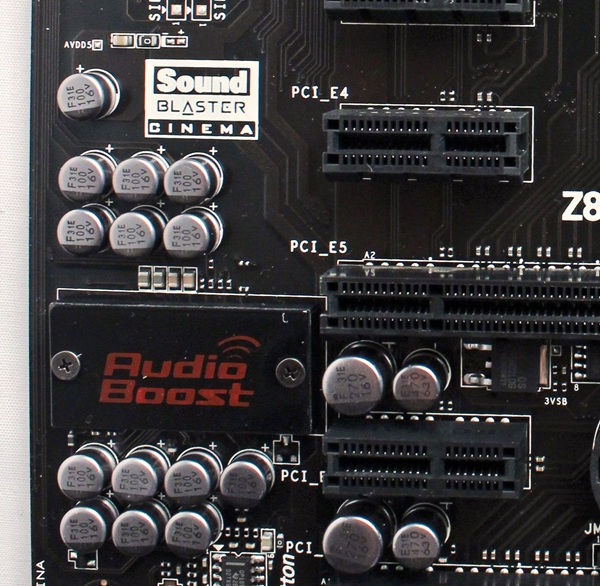 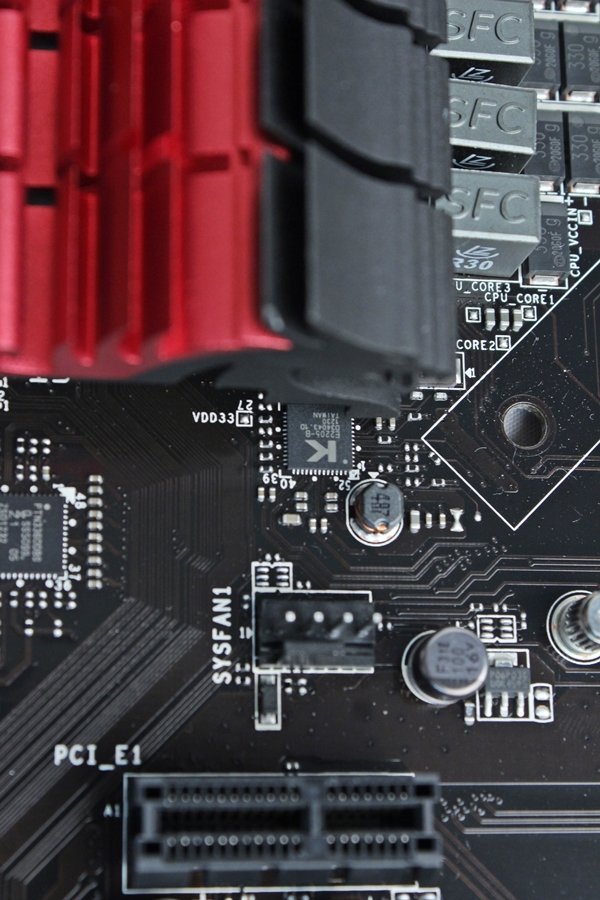 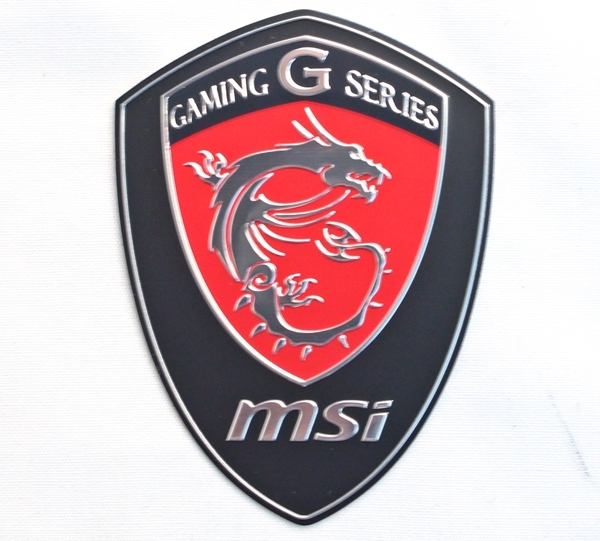 The MSI Z87-GD65 Gaming is the second Gaming series board that we've encountered and it has a slightly improved feature set that distinguishes it from its Z77 predecessor. Besides having support for overclocked DDR3 memory modules, this board is also OC Certified so we do expect this board to perform as well as its Z77 counterpart in terms of overclocking. Stay tuned as we put the board through our usual slew of benchmark and overclocking exercises in order to ascertain its performance levels - after the Haswell CPUs and Intel Z87 chips are official of course!