The Golden Nugget from the Black Series

All That Glitters is Gold

In the run-up to the launch of Intel's Ivy Bridge processors, there has been a slew of motherboard launches from the different manufacturers. Recently, we showcased the MSI Z77A-GD65 and from ASUS, the P8Z77-V Deluxe as well as the ROG Maximus V Gene, which is the first microATX gaming motherboard to hail from their prestigious Republic of Gamers (ROG) lineage.

In order to differentiate itself from the slew of Intel Z77 motherboards populating the market, ECS has commissioned two boards under its Golden Limited Edition branding as a higher-tier SKU from its illustrious Black Series. We had a 'golden opportunity' to preview the ECS Z77H2-AX, from this new sub-series:- 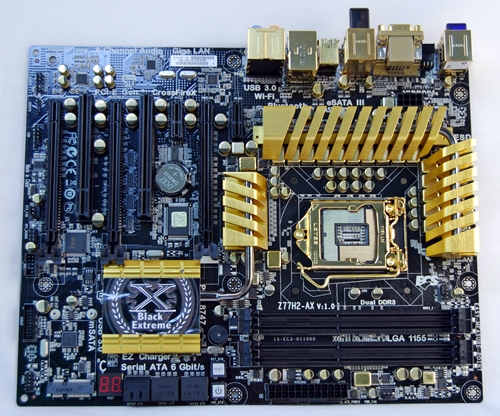 This standard ATX form factor motherboard will support the upcoming Ivy Bridge processors using the 22nm fabrication process or the current Sandy Bridge processors fabricated from the 32nm process technology. As we have mentioned in our earlier preview of the MSI Z77A-GD65, we are bounded by Intel's NDA with regards to the performance related matters of the upcoming CPUs; however, the release date of such information has been brought forth and we should be able to have an in-depth review of the Ivy Bridge CPU together with its new accompanying mainstream chipset, Intel Z77 Express soon enough.

The new Ivy Bridge CPU delivers 16 PCIe lanes, just like previous generation Sandy Bridge processors; however, with the new CPU and motherboards, these lanes are officially rated to operate at PCIe Gen 3 speeds of 8GT/s. Since the ECS Z77H2-AX is a high-end board, the company has equipped the board with an additional PLX PXE 8747 switching chip that takes in the 16 PCIe lanes from the CPU and is able to support 32 PCIe lanes via high speed switching for various multi-GPU setups. The switching chip is also PCI e Gen 3 compliant so transfer speeds are not compromised either. The controller was actually covered by a heatsink (layered in gold) just adjacent to the first PCIe Gen 3 x16 PEG slot. With the board's triple physical PEG slots and the PLX switching chip combined, you can get dual full speed PEG slots (x16/x16) configuration for 2-way multi-GPU setup or even a 3-way setup in x16/x8/x8 configuration. Had the motherboard been equipped with a fourth PEG slot, the switching chip could allow all four slots operating at PCIe x8 speeds. ECS was wise not to add on to the cost of the board to support a configuration that would have been seldom used anyway for its intended audience. 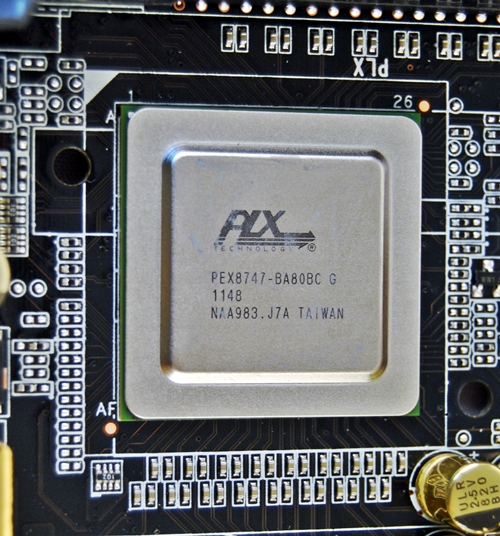 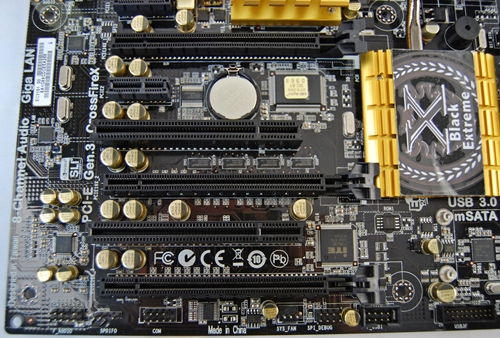 As with the other boards we have previewed, ECS Z77H2-AX supports LucidLogix Virtu MVP software allowing you to utilize the integrated GPU of the processor seamlessly with any discrete graphics card(s) installed on the board to maximize power efficiency. For those who're not familiar, this means if you're just watching movies or browsing the internet, the integrated GPU would handle these tasks to conserve system power utilized, but discrete graphics kicks into action when they are needed most like when you're gaming. The logic of how and when which GPU is used is controlled by the Virtu MVP software (determined by load levels and API calls) for which you can further configure to trigger the right GPU for specific applications. 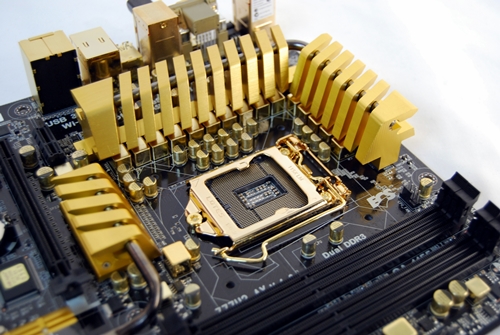 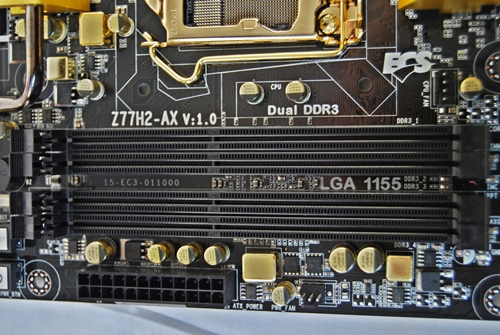 The board comes with a bundled Wi-Fi antenna that connects to the back of the Wi-Fi dongle. ECS should have taken a page from the ASUS P9X79 Deluxe board that has slicker Wi-Fi Moving Ring Antenna. What ECS has provided will suffice functionally, but it's not an elegant solution. 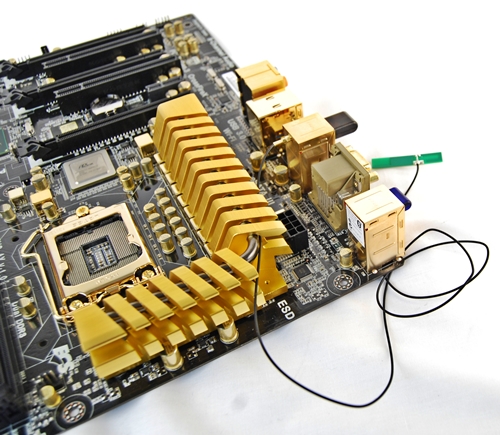 Another interesting high-end feature of the board is the presence of mSATA 3Gbps connector after the two-digit DEBUG LED segment. This allows users to install a single mSATA SSD to take advantage of the board's Intel Smart Response Technology.

We were impressed with the gold plating effect of the board but its luster waned somewhat as we examined certain implementations of the board like a missing DVI port, lack of clear markings of SATA connector types, badly positioned PCIe x1 slot and a warped PCB. One of the most important highlights of the board was its multi-GPU support in 2-way x16/x16 mode and even 3-way multi-GPU support due to the presence of a PLX PXE 8747 switching controller to support double the number of PCIe Gen 3 lanes. This feature was neither highlighted in its manual nor its product page on ECS website. On the whole however, we have to say that the board has the makings of a high-end board with its wireless connectivity options, mSATA connector and support for extra PCIe Gen 3 lanes. It remains to be seen if all that glitters is really gold after we put the board through its paces with an Ivy Bridge processor so watch out for our lab test in the near future.