ASUS made quite a splash at IFA 2015 in Berlin earlier this year by announcing two new 17-inch gaming notebooks. While the simply bonkers, liquid-cooled ROG GX700 was the undisputed star of the show, the new ROG G752 is the model that most gamers would most likely purchase because of its more accessible price. 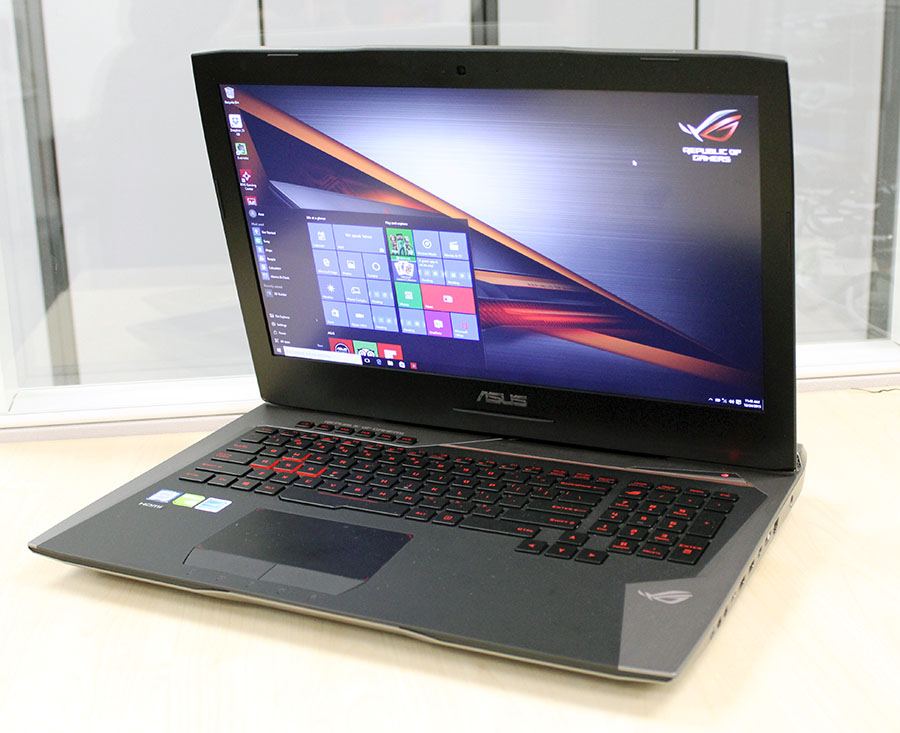 The first thing gamers would notice about the ROG G752 is its new design and color scheme. In the past, ROG notebooks can be identified by their black and red color schemes, but the new ROG G752 has a new color scheme that ASUS calls Titanium Armor and Plasma Copper - just like the ROG GX700. It’s a nice look and we especially like the new Plasma Copper accents, which resemble rose gold and gives the notebook a very premium look.

And as befits a premium gaming notebook from ASUS’ much vaunted ROG collection, the ROG G752’s chassis is constructed mainly out of aluminum. It feels sturdy and well put together. However, the ROG G752 is no ballerina. It measures 51mm thick at its bulkiest point and tips the scales at a hefty 4.4kg. Though the thickness is pretty alarming, the weight, however, is pretty standard fare for most 17-inch gaming machines, so there’s no surprises there. 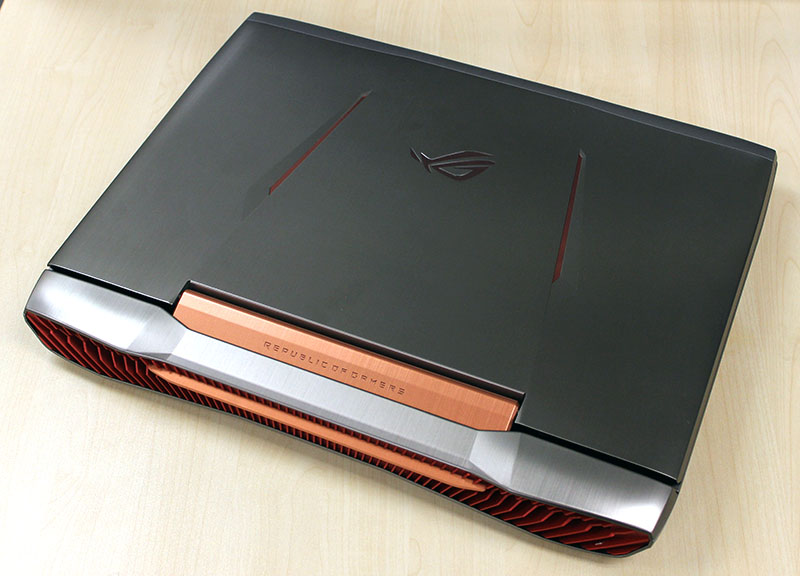 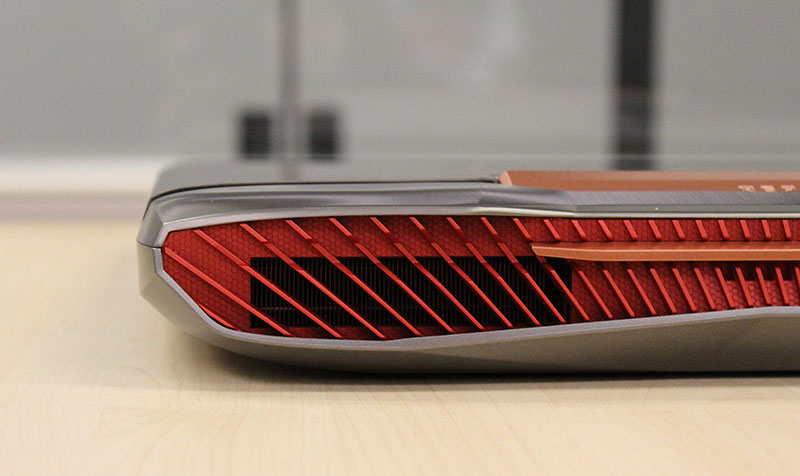 Fortunately, the ROG G752 redeems itself by making sure all that heft is worthwhile as it is packed with cutting-edge hardware and choke-full of features. To kick things off, the 17.3-inch IPS display outputs Full-HD resolution (1920 x 1080 pixels) and it supports NVIDIA’s G-Sync technology. G-Sync, if you don’t already know, is a technology introduced by NVIDIA in late 2013 that aims to reduce lag, stutter and tearing by syncing the refresh rates of the display to the draw rates of the GPU. 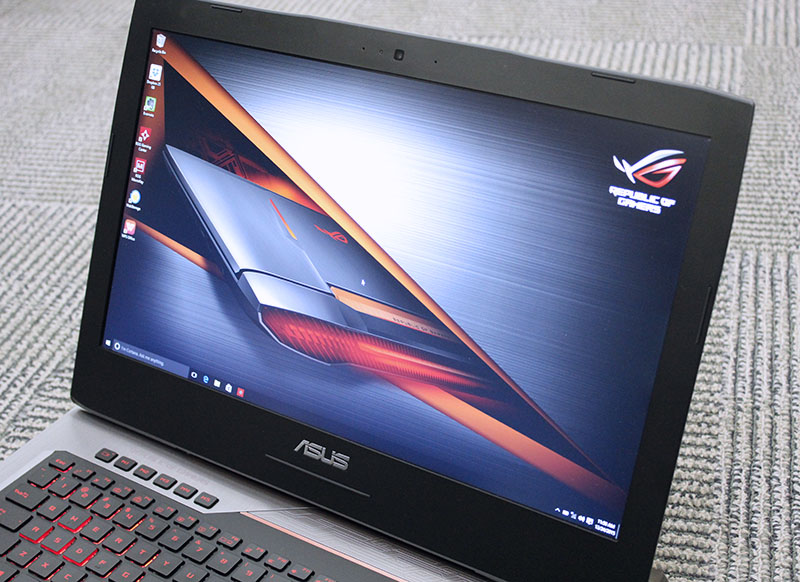 The display has a matte finish and does a good job of reducing unwanted glare and reflections. The colors are bright and crisp, but like we mentioned in our hands-on of the ROG GX700, Full-HD resolution displays are starting to look a little dated these days. That said, it’s a worthwhile trade-off as higher resolution displays would tax the GPU further which in turn translates to lower frame rates. Though the GeForce GTX 980M GPU within is NVIDIA’s most powerful mobile GPU, it’s not invincible, and it will probably encounter some problems if gamers insist on running the latest titles today at very high resolutions with all the graphics settings set to max.

Inside, the ROG G752 is powered by Intel’s latest sixth generation Skylake processors. Our model, the ROG G752VY, is the top-of-the-line model and it comes with an Intel Core i7-6700HQ processor (2.6GHz, 6MB L3 cache) and NVIDIA’s GeForce GTX 980M GPU with 8GB of framebuffer. Complementing this setup is 16GB of DDR4 RAM and hardcore users will be happy to know that the ROG G752 can accommodate up to 64GB of RAM. There’s also a 1TB 7200rpm hard disk drive, which we think is really out of place, given the high specifications of the machine and the fact that it is targeted at gamers. Surely an SSD is a must for a notebook that aspires to be a gaming machine for enthusiasts. Fortunately, the storage can be customized and the ROG G752 can be spec’ed with flash storage, but note that this will come with added costs, or you could go at itself. You see, the ROG G752 features a back panel that can be easily removed for more tech savvy users to upgrade the memory and storage. The ROG G752 has two SO-DIMM RAM slots, a single 2.5-inch SATA bay and two M.2 PCIe slots (Type 2280) that's easily accessible once the back panel comes off. 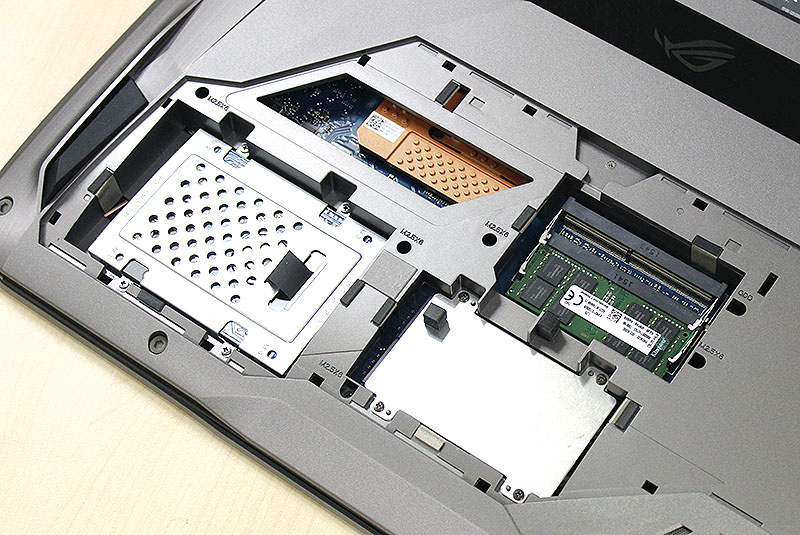 One thing that’s unique about our particular model is that it has been outfitted with a vapor chamber cooling system. Vapor chambers are usually used in high-end applications, such as the Surface Pro 4 and high-end graphics cards, and are favored over traditional heatsinks and heatspreaders because of their better thermal conductivity. Heat from the CPU and GPU vaporizes the coolant liquid within the chamber which then flows to the heatsink located near the fans where it condenses and flows back to the CPU and GPU. According to ASUS, this can help lower temperatures by a whopping 11 degrees Celsius and can improve graphics performance by up to 6%. This trick cooling system is only available on ROG G752 models outfitted with the GeForce GTX 980M. 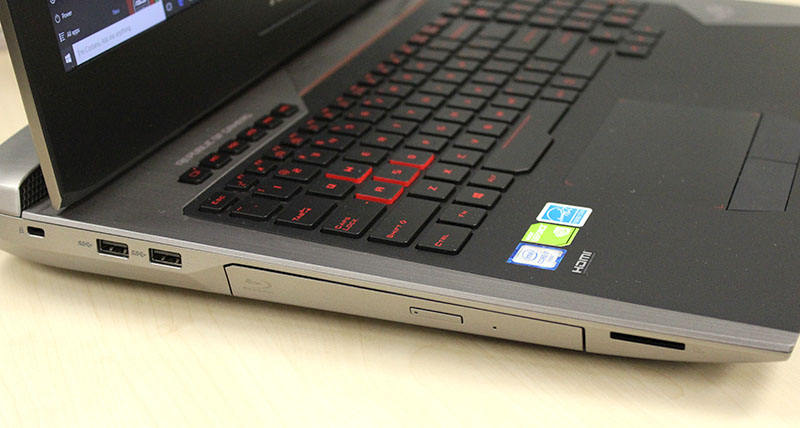 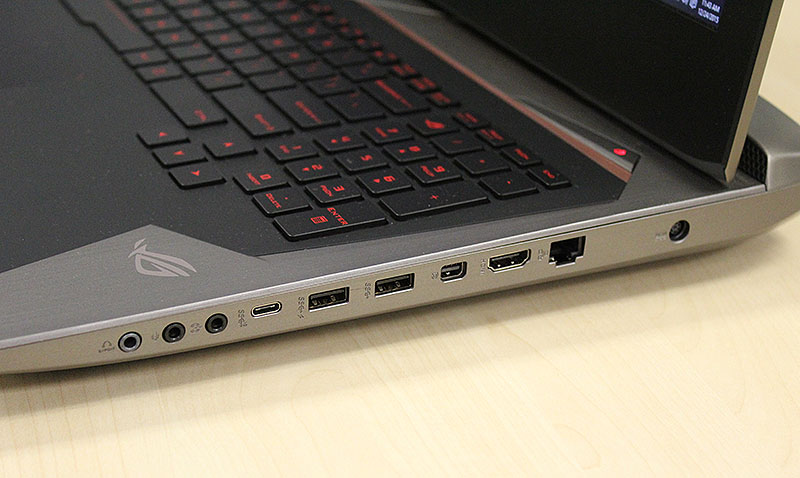 Like the ROG GX700, the ROG G752 comes packed with all the latest ports and interfaces. There’s four USB 3.0 ports and a single USB Type-C port that supports both USB 3.1 (Gen 2) and Thunderbolt 3.0. USB 3.1 (Gen 2) offers speeds of up to 10Gbps, while Thunderbolt 3.0 does a staggering 40Gbps. This is great for users who intend to daisy chain 4K or 5K displays and high speed external storage devices. There’s also a Gigabit Ethernet jack, which should be a welcomed addition for online gamers as nothing beats a wired connection. As for video outputs, there’s a Mini-DisplayPort and a HDMI 2.0 port. Rounding things off are the SD card reader and a Blu-ray combo drive. As for wireless connectivity, the ROG G752 supports 802.11ac of speeds of up to 867Mbps and also Bluetooth 4.0. 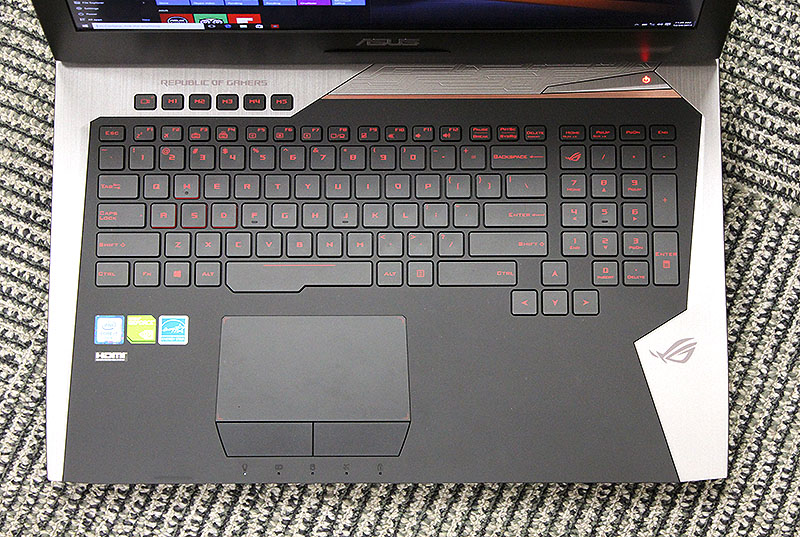 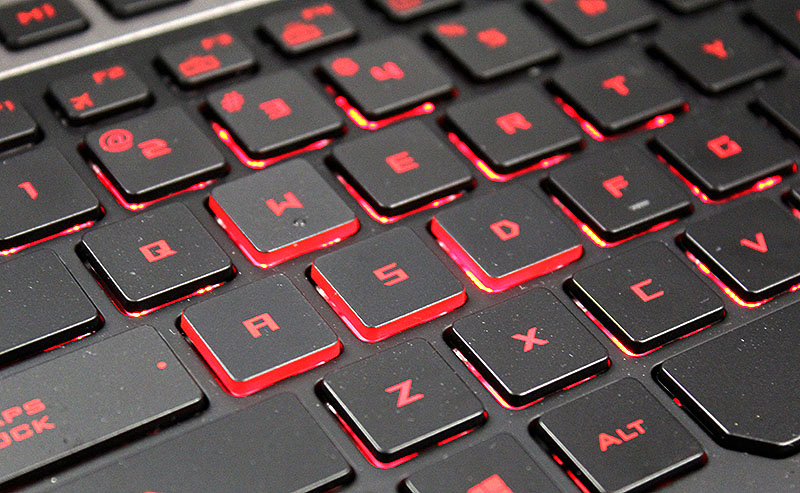 The keyboard is well-sized and pleasant to use, thanks to its generous 2.5mm of travel. It also features 30-key rollover, a boon for fast players and typists. There are also hot-keys to quickly activate the ROG Game Center (more on this later) and XSplit Gamecaster, a game recording and live streaming application. There are also five macro keys in the top left corner which can be configured to execute stringed commands on the fly or simply as additional shortcuts. The trackpad is also well-sized, responsive, accurate and features none of the hesitancy and erratic behaviors that we have experienced on some other notebooks. 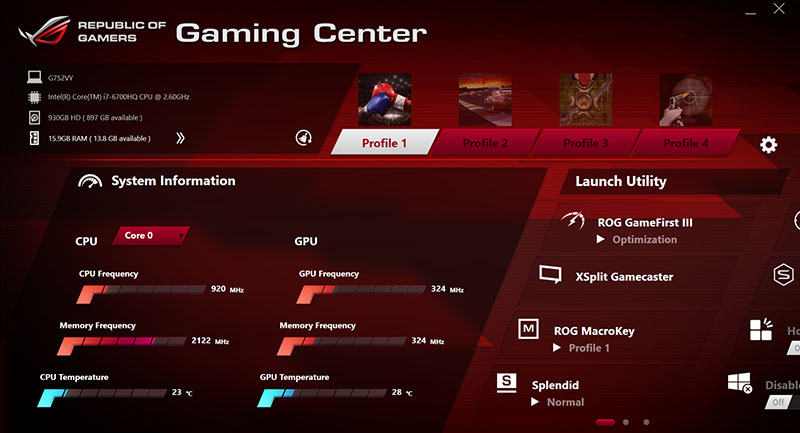 Like the ROG GX700, the ROG G752 also comes bundled with ROG’s suite of gaming applications. The first and perhaps most important is the ROG Game Center, an application that lets gamers monitor their systems, configure different game profiles, keyboard profiles, macros, and more. And if you spec’ed your ROG G752 with Intel’s unlocked Core i7-6820HK processor, the ROG Game Center can also be used to overclock your system. 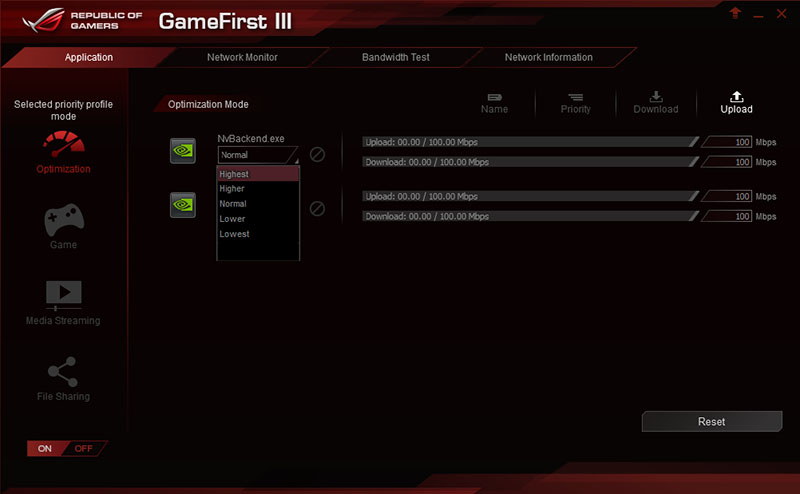 The ROG Game Center aside, the ROG G752 also gets the ROG GameFirst III application - again, just like the ROG GX700. ROG GameFirst III can be best described as a network manager and software QoS (Quality of Service) for gamers. It lets users monitor all incoming and outgoing connections on the notebook and gives users the option to decide which applications should get priority. Users can also make use of the preset modes for various scenarios like gaming, media streaming or file-sharing. 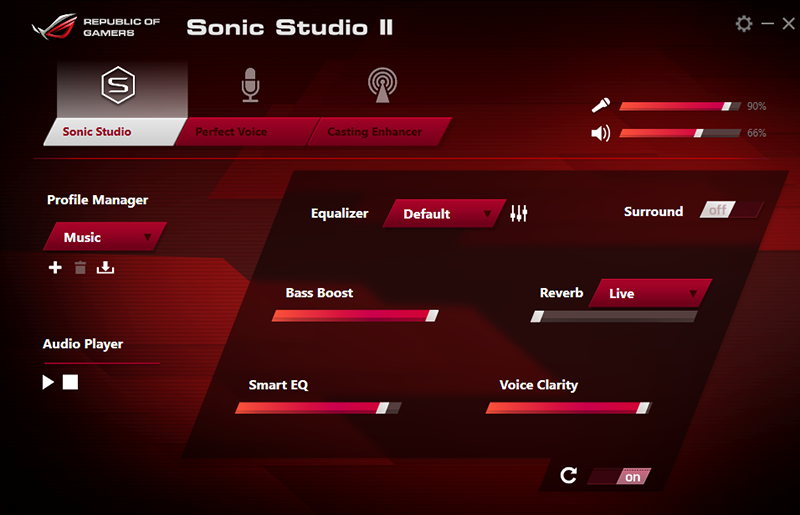 The final application is Sonic Studio II, a software digital signal processing (DSP) application that lets users manage their audio preferences. It can be used for things like increasing voice clarity for multiplayer chat or simply increasing the bass for music listening. This can work with the built-in speakers, external speakers or headphones. The built-in speakers, it’s worth mentioning at this point, is above average for notebooks, but still no match for proper headphones or computer speakers. It’s sufficiently loud and quite bassy (thanks to the built-in subwoofer), but lacks clarity and sounds awfully muffled. Another thing to note is there’s an additional line-out port that supports S/PDIF, so with the correct adapter, you can have a digital output to your desktop amplifer/DAC or speakers.

Based on our first impressions, the ROG G752 looks like a promising notebook for discerning gamers. It has the latest Intel CPU, a powerful GPU, a rich selection of ports and some interesting bundled software. The use of a hard disk drive instead of an SSD is a sore spot, but fortunately, the notebook is easily upgradeable.

Stay tuned to a full review to find out how the ROG G752 performs when compared to its bigger brother, the ROG GX700!