In case you have not noticed, ATI's website has undergone some superficial changes in appearance to match its new owners - AMD. The red team has gone green, though its logos and brands seem to have remained the same. Its website URL has been changed to reflect the new order at the graphics chipmaker. For AMD, it's a rather familiar story as it takes over a graphics business facing stiff competition in the market from NVIDIA, analogous to what it encounters now with Intel in the CPU arena. Going by the numbers, the new combined entity is currently at a performance disadvantage for both processors and graphics, but the synergy potential was highlighted recently with AMD's launch of a dedicated stream processor for high performance computing.

What ATI did essentially was to slap on faster memory chips on the older Radeon X1900 XT and up its clock from 1450MHz DDR to 1800MHz DDR. Therefore, the 'new' Radeon X1950 XT has a core and memory clock of 625MHz and 1800MHz DDR, along with 256MB of DDR3 memory. No doubt, we may find custom 512MB versions from vendors but 256MB seems like the more cost efficient and common variant.

So is the Radeon X1950 XT 256MB worth your time? We recently got one from PowerColor and put it through our usual tests. Before revealing the details, here's a glance of the PowerColor retail package: 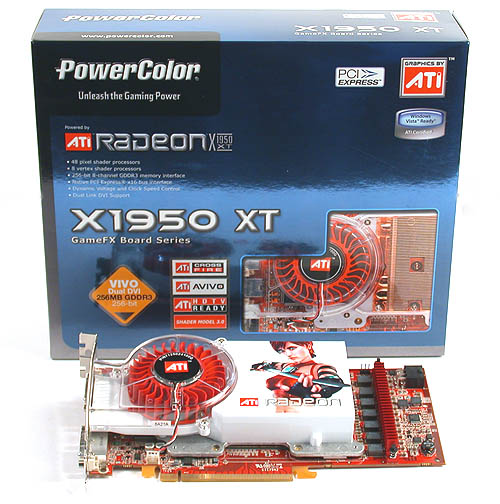