Portal Wi-Fi review: Don't be fooled by its looks, this little router rocks! 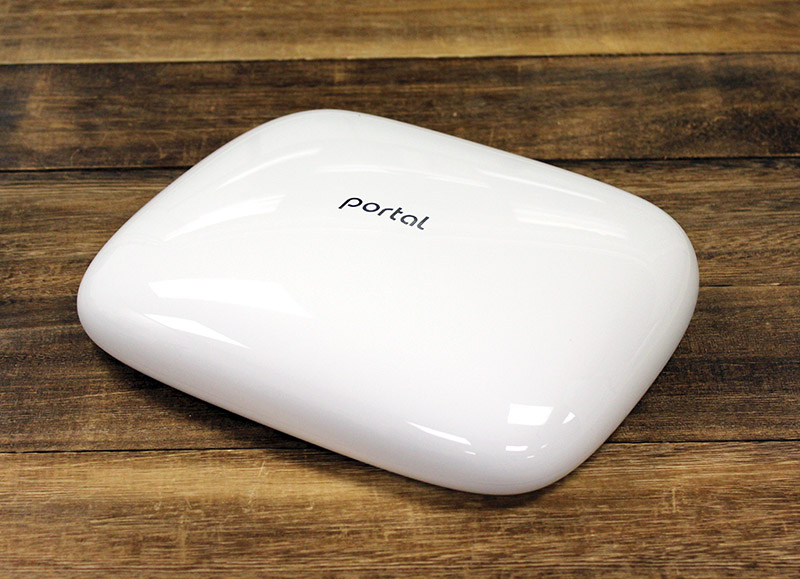 The real problem of slow Wi-Fi

The Portal is a new router by a young company called Ignition Design Labs. The company was formed by engineers who have worked together for over a decade and have came up with designs on which hundreds of millions of Wi-Fi devices today are based on.

Ignition Design Labs came about because a group of engineers became disgruntled with the state of the home networking industry. They say that networking brands are not solving the real problems that were making Wi-Fi slower and less reliable. In addition, they also wanted to make Wi-Fi easier to setup for everyone. These are the two main tenets that guide Ignition Design Labs.

So what is the real problem behind troublesome Wi-Fi? According to Ignition Design Labs, the answer is congestion. If you live in a typical apartment, you might find that your home is actually surrounded by many Wi-Fi networks. Even in my office and from my desk, my Mac now tells me that there are 9 separate Wi-Fi networks that I can connect to.

That’s bad news because more Wi-Fi networks mean more congestion. And it is especially bad if your neighbor happens to be using the same Wi-Fi channel as you. Of course, you could maximize performance by downloading a Wi-Fi scanner and making sure that you set your own Wi-Fi to a channel that isn’t used by your neighbors. However, how many of you reading this know or even have the time to do that?

Portal is a specially designed router that can avoid congestion thanks to its Dynamic Frequency Selection (DFS) feature. But how does it work?

Portal distinguishes itself from other routers because of its DFS capability and FastLanes technology. These two features combine to allow the Portal router to use 5GHz channels that are typically reserved for radar use by the military and weather services.

The thing with 5GHz channels is that a good portion of it is reserved for radar use. Typical consumer-grade routers can’t touch this spectrum. It is not that they aren’t allowed to, but it is because there are strict requirements in place for routers who do choose to use this restricted spectrum. For example, they must be able to detect when a radar is nearby, and when it is, the router must vacate the spectrum.

Obviously, this constant scanning adds overhead to the router and also requires specialized hardware, which adds to complexity and cost. As a result, few consumer-grade routers have this capability.

In a nutshell, the Portal allows users to use Wi-Fi channels that other regular routers can’t touch. This frees it from congestion and should, in theory at least, result in better overall performance.

But bear in mind that you need client devices that support DFS to be able to take advantage of this capability. The good news, however, is that most products released in the past two years will support DFS. There's a small list of devices that don't and Ignition Design Labs has a list of them here.  Having said that, note that this list is not exhaustive and there might be other devices that don't support DFS and isn't listed here.

The Portal is capable of forming a mesh network too with a second Portal router. This lets users expand their Wi-Fi coverage using a single SSID. However, this feature is limited in the sense that you can only expand coverage once by adding a second Portal router. You cannot expand coverage further by adding a third router. That said, Portal claims that a single router can blanket an area of 3,000 ft2 or 280 m2, so two Portal routers should be enough for most homes.

However, note that because the Portal is only a dual-band router it doesn’t have a dedicated network for backhaul communications between the two routers. This means it has to use the same network that users use, so users should expect to see some drop in performance when using the Portal as a mesh network. 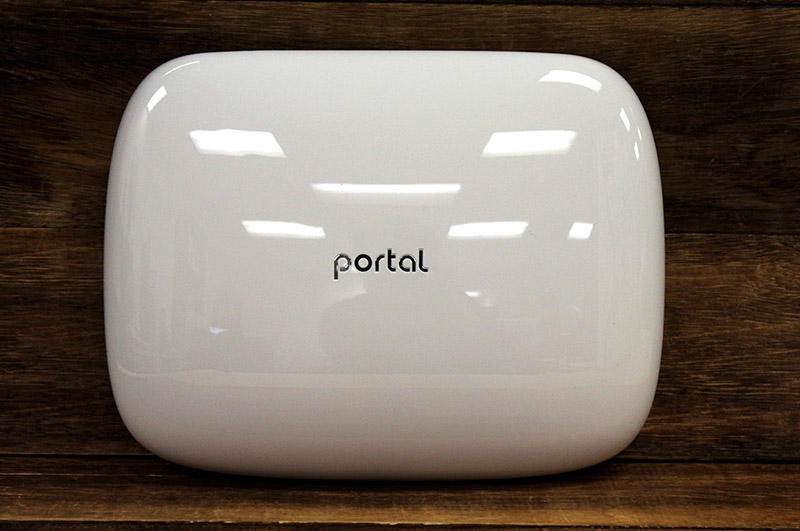 The Portal router comes in a glossy white enclosure with curved edges. A simple Portal logo adorns the top panel and there are no external antennas. It is a simple and clean design that should look good in most homes. It is fairly wide though, so you will need a good amount of space to position it. For users who are handy with tools, the Portal has wall-mount slots, so wall-mounting is possible. 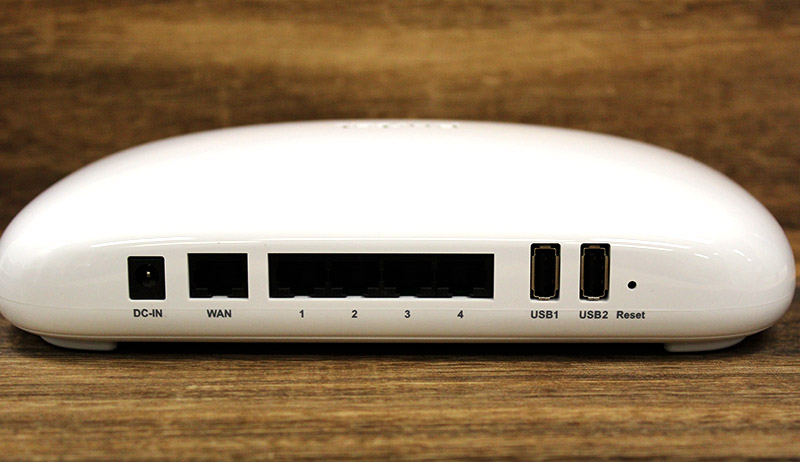 Ports are all located on the back. There are four Gigabit Ethernet LAN ports and a single Gigabit Ethernet WAN port. This is standard stuff for most routers, so no surprises there. There are also two USB 2.0 ports. Two USB ports are great, but what’s not so great is that they are rated for USB 2.0 speeds only. For folks who want to attach an external storage device to it for file-sharing, this could mean slower transfer speeds. Perhaps they are betting on people who really need network storage might be using NAS systems instead.

Inside, the Portal is powered by a Qualcomm QCA9563 SoC that runs at 750MHz. Both 2.4GHz and 5GHz radios are also from Qualcomm. Maximum data transfer rates on the 2.4GHz and 5GHz networks are 600Mbps and 1,734Mbps respectively. This makes it an AC2400-class router.

Those two antennas are responsible in detecting for radar presence. If it detects radar use in the proximity, it switches out of the restricted spectrum. Thanks to a dedicated Qualcomm “SpectrumBoost” co-processor, the switch from restricted to unrestricted channels is purportedly seamless, meaning users do not experience a catastrophic cut in connection that requires them to reconnect to their Wi-Fi network. 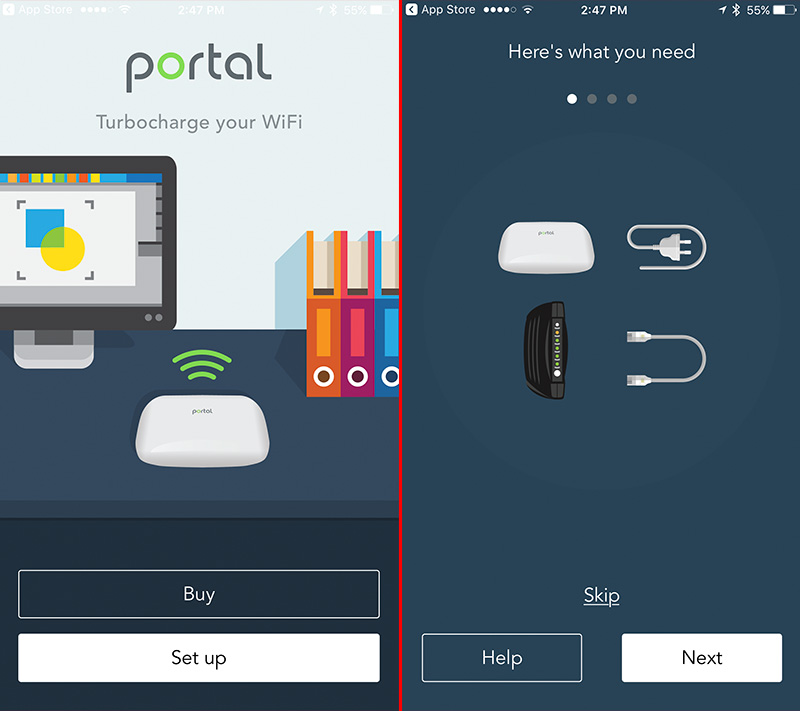 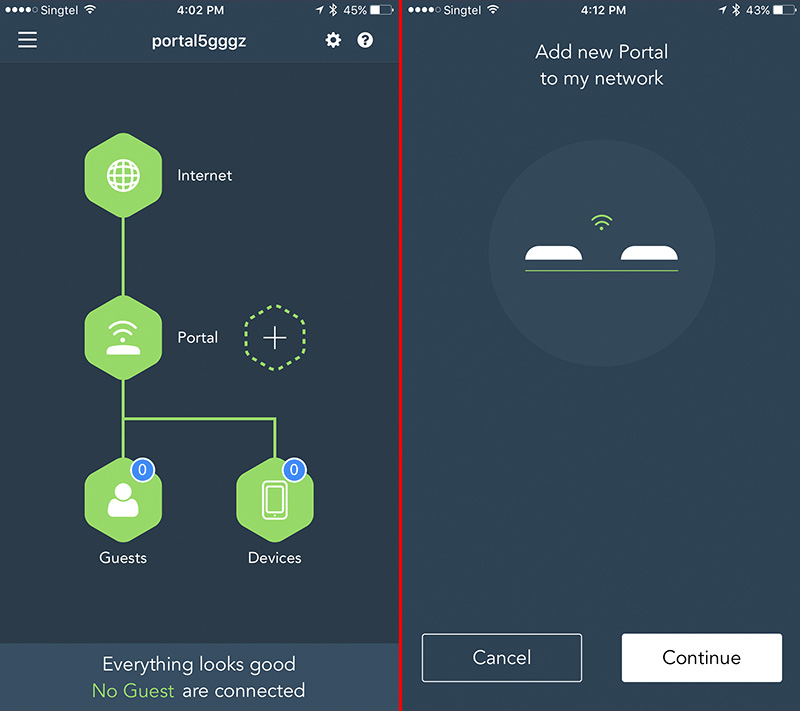 Setting up the Portal was pretty straightforward and easy. Like most modern routers, the Portal can be configured using an app. The Portal WiFi Router app is available for both iOS and Android devices. Simply follow the onscreen instructions and you are set. Traditionalists can also setup and configure the router using the web setup interface. The web interface is welcoming and easy to use. It also has all the features most users would want from a router such as parental controls, QoS, VPN, Dynamic DNS, network file sharing, and port forwarding. 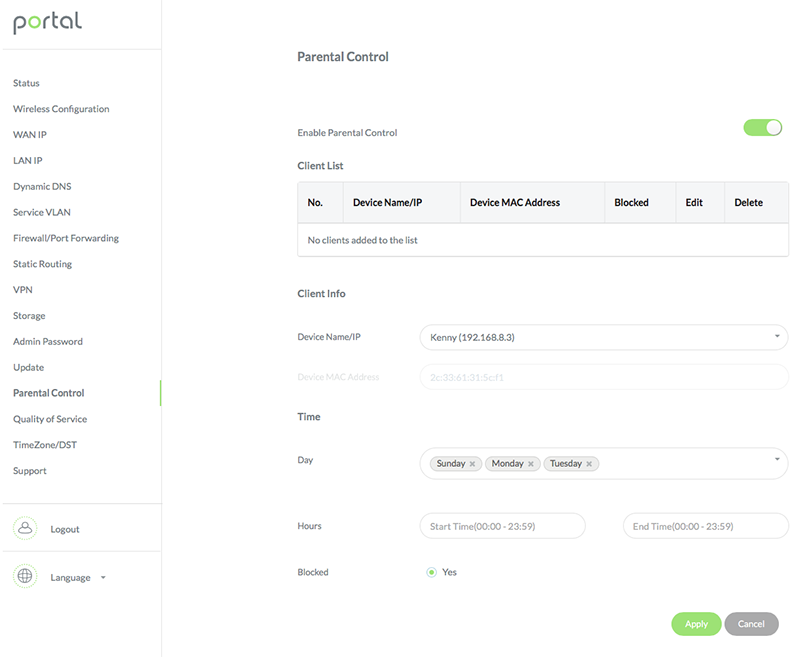