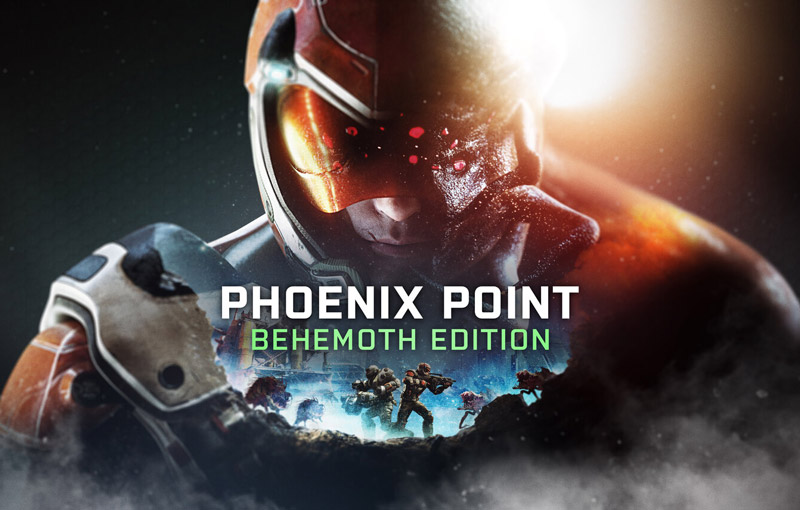 The creator of the very first XCOM game, Julian Gollop, has ported his latest game Phoenix Point: Behemoth Edition to consoles. Gollop hasn’t had much to do with the XCOM franchise lately (that credit goes to Firaxis Games, who are now making a Marvel game) but Phoenix Point might just be close enough to fill the XCOM-sized holes in our hearts. Strategy games aren’t as popular in the mainstream market like they used to, but they do occupy a space in many older gamers' hearts.

The question then, is not whether Phoenix Point feels like XCOM - but whether it lives up to XCOM. After all, this comes from a famed turn-based strategy games maker with decades of experience. Expectations are high and while Phoenix Point might not fully meet them, it will whet your XCOM appetite thanks to its sheer breadth of content alone.

If Phoenix Point sounds familiar to you, that’s probably because it came out two years ago for Mac and PC. Phoenix Point: Behemoth brings the game over to PlayStation 4 and Xbox One consoles with all the DLCs and expansions released over the course of those two years. Behemoth is actually a fair way to describe this port, as it packs four big expansions that all add new features, content, enemies, character classes and gear for players to partake in. It’s actually quite overwhelming as a new player, since your first playthrough with all DLCs unlocked feels more like you’re playing the game on New Game+ mode rather than from scratch.

By that, I mean that you’re not getting the untouched first-day experience. Your first playthrough feels vastly more complex due to all the new enemy types and weapons to keep track of - and not all of them feel like seamless additions. Some new enemies and equipment feel like they were introduced in a clear effort to balance certain mechanics out and keep gameplay smooth. The new necromancer-like enemies that resurrect the dead for example, add challenge and enemy variety where the latter is sorely needed. Other additions are clumsier, such as a bizarrely out of place aerial minigame where you use a plane to shoot down enemies. Even with all the DLCs toggled off, this is a difficult game. Toggle them on and you just get a more complex and intimidating experience - which is fine, as long as you can handle these inconsistencies. 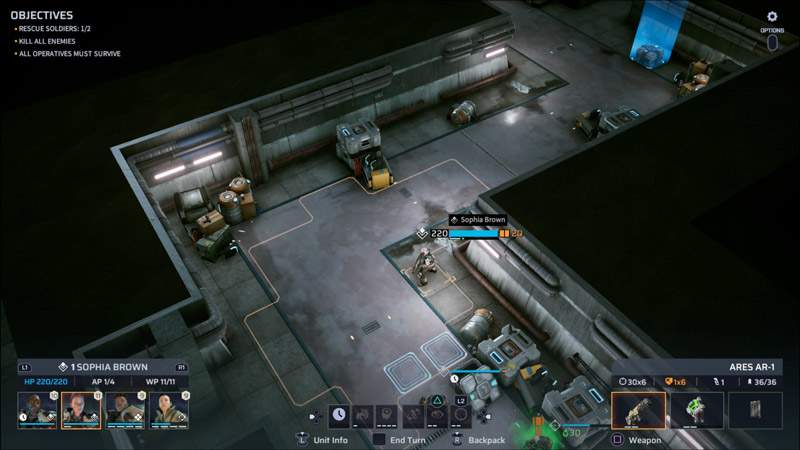 I played this game on PlayStation 5 via backwards compatibility, and didn't run into many visual issues save for the occasional UI bug or clipping issue. Maps are not only large and detailed with lots of little items that you can interact with, but surprisingly destructible as well. Right off the bat, the tutorial lets you control a land vehicle that can just mow through buildings, obstacles and enemies with zero resistance. Fantastic stuff. Other than that, console players should know that they’re in for some exceptionally long loading times even on the PlayStation 5. These are a real pain to sit through, especially because tactical games of these nature are a learning experience. You’ll die and have to repeat missions a lot, and painfully long loading screens only rub salt in the wound.

Phoenix Point controls well on a console, but it is a definite step down from the mouse and keyboard. Simply raising the camera up to different elevation points or cycling through specific actions can be borderline frustrating, but it never feels significant enough to keep you from playing. That being said, these controls could definitely use some fine tuning. 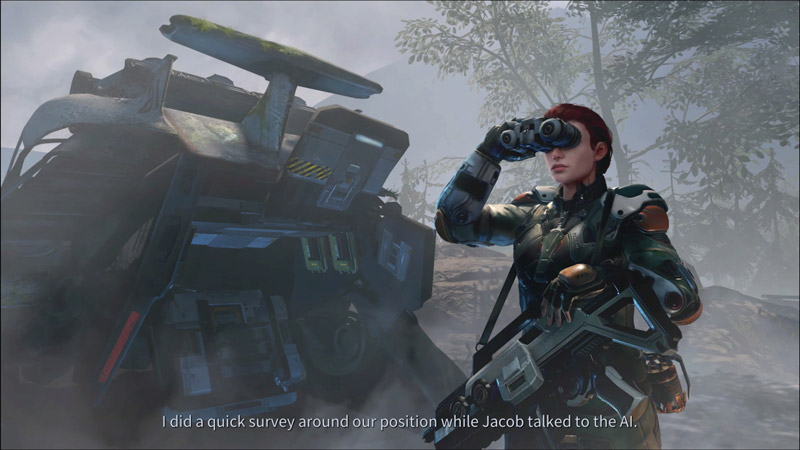 Phoenix Point plays like your standard isometric tactical game - with a few key twists. You control diverse groups of soldiers who charge into battle using a turn-based action system. Certain actions, such as reloading, shooting and using abilities use up different amounts of action points, so you’ll have to balance them wisely to make the most out of a turn. There’s also a meta game that involves you managing soldier upgrades by expanding your home base and pouring resources into research and development. To be honest, these are the parts of XCOM-like games I enjoy the most - not the combat, but balancing resources and managing your recruits. I live for that stuff.

Phoenix Point sees a slew of Lovecraftian monsters invading Earth in the year 2047, threatening to wipe out the human race completely. Alien invasions are not new to tactical strategy games by any means, but Phoenix Point's Lovecraftian twist freshens the idea up a bit. Your soldiers lose action points when they’re hit by certain enemy attacks or meet Lovecraftian beasts, and when these points dip below zero they begin to go insane. This sanity meter-like system is a really nice touch, allowing Phoenix Point to stand apart from its sci-fi siblings by leaning more on horror. 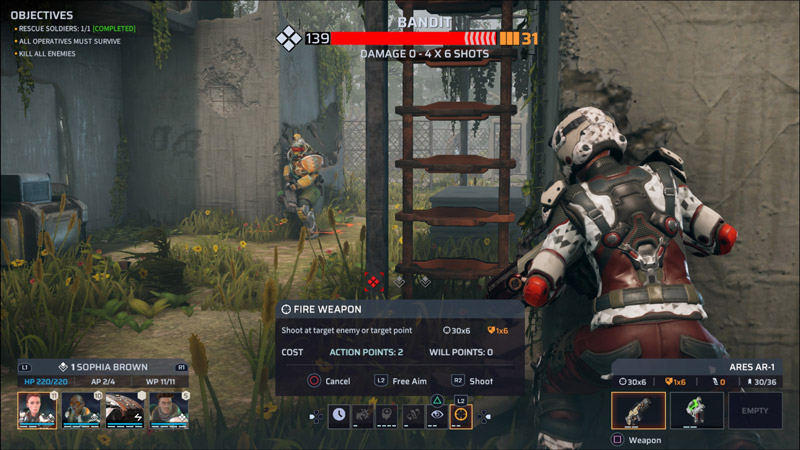 Much like Fallout and other RPGs like it, you can also choose to align yourself with different existing factions, and these choices cause the campaign’s storyline to diverge into different endings. Each of these factions has something to offer you in your world-saving quest, but you won’t be able to side with all of them in a single playthrough.

I can’t say that this campaign felt as absorbing as Gears Tactics did just recently, but I will say that I loved its Lovecraftian premise and how that bleeds into gameplay. The story is fairly by the numbers and it has some replayability due to faction alignments and various story-altering decisions, but I wouldn’t go back for seconds. The only thing lifting this campaign from mediocrity are its many decisions and their surprisingly deep consequences. I also can’t argue against the fact that even if the extra DLC expansions don’t make for consistently fun gameplay, they do add a massive and diverse amount of content. 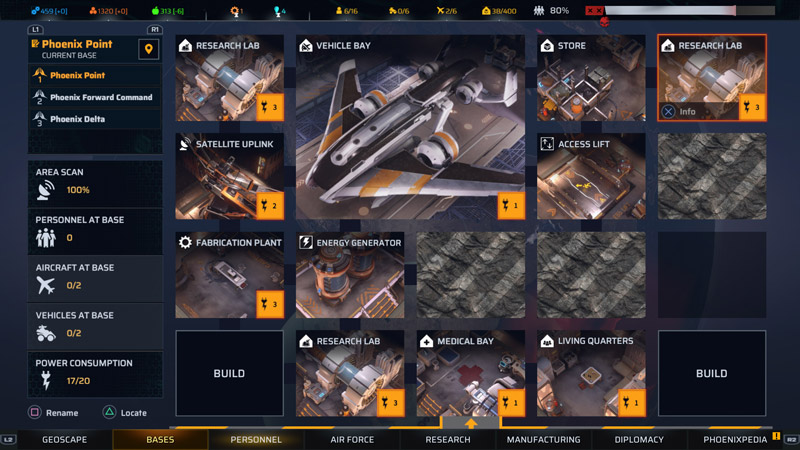 If you’re looking for a tactical strategy game to play with tons of content and an interesting premise, Phoenix Point: Behemoth Edition is a solid choice. It doesn’t execute everything it sets out to do perfectly, but solid combat, choices with plenty of depth and a fun base management system will keep you going as long as you’re a fan of the genre. If you’re new to the genre, I would actually recommend Microsoft's brilliant Gears Tactics instead.

Write a Review
Compare This | Specifications
Tons of content
Interesting supernatural horror angle
Meaningful story choices
Not all extra content is balanced well, or even good
Annoying loading times
Story isn't particularly gripping
Our articles may contain affiliate links. If you buy through these links, we may earn a small commission.
Sponsored Links