Persona 5 Scramble: The Phantom Strikers suffers from an identity crisis

Is it more Musou or RPG? 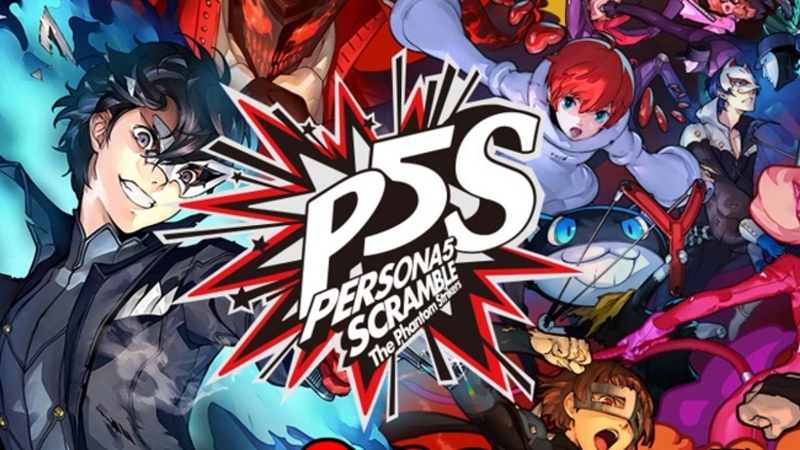 I'll be frank: my mother tongue isn't one of my strong suits, and I don't think it'll ever be - my academic grade for the subject says as much. So when a copy of Persona 5: The Phantom Strikers in Mandarin came by for review, I instinctively knew the most challenging thing about doing up the article wasn't going to be putting my pen to the keyboard, but rather the process of converting everything to plain old English.

Sure enough, the pains of "translation", coupled with the fact that I've only had snippets of experience with previous Persona titles, made reviewing this one a real hurdle. Nevertheless, I'm always up for a challenge, so here we are.

A different coat of paint 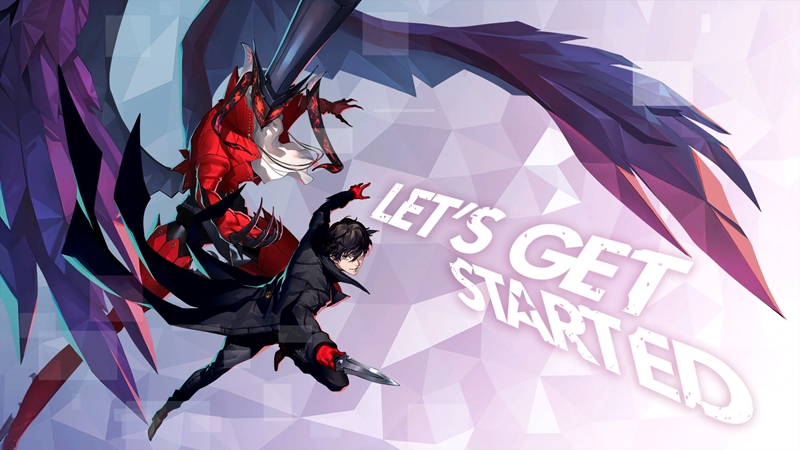 I guess the first thing that hits you, especially if you're already a fan of the series, is that this isn't your usual Persona game. Instead of the conventional turn-based format, Scramble adopts the Musou style of combat made popular by Koei Tecmo's Dynasty Warriors. In fact, the word "Musou" actually refers to the special attack or Musou gauge in the original Japanese version of Dynasty Warriors - it's like how you'd address some deliberately difficult games as "Soulslikes" nowadays in reference to Dark Souls.

Basically, how it works is by pitting you against a literal army of never-ending enemies in real-time - you have free rein to attack, dodge, and use your character's abilities as preferred. Victory conditions tend to vary widely, but common ones include eliminating a set amount of enemies or simply killing the "commanders" in each enemy region within a time limit. 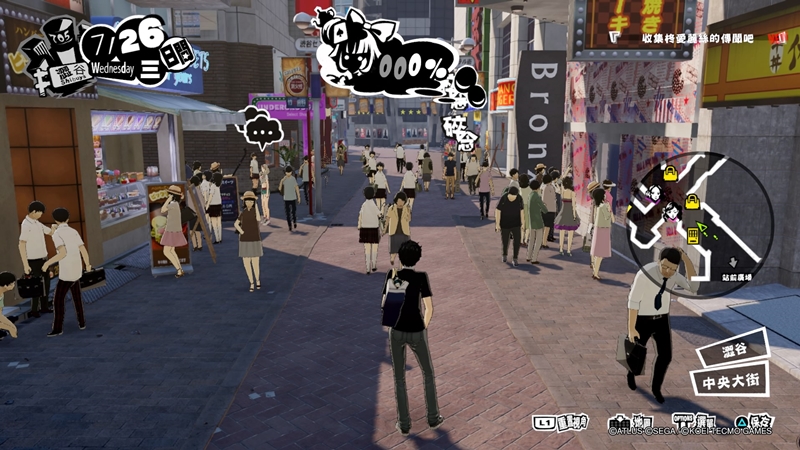 When you're not fighting swarms of enemy mobs with your NPC buddies, the RPG side of Scramble's equation presents itself. Or at least it tries to. Apart from the usual levelling, equipment and item usage system that's par for the RPG course, you usually do one of two things: the first involves walking around and interacting with the various characters and items, while the second is your usual dialogue-based segments with several responses you can choose from. Yes, there's lots of talking in Scramble...perhaps too much.

In fact, it can't help but get dreary at times, and I can honestly say that I've spent more time clicking through dialogue and running around the city than actually fighting, which I find concerning. You could skip the former of course, but then it'd defeat the entire purpose of the narrative. On that note, here's a heads-up on the synopsis before we go any deeper. 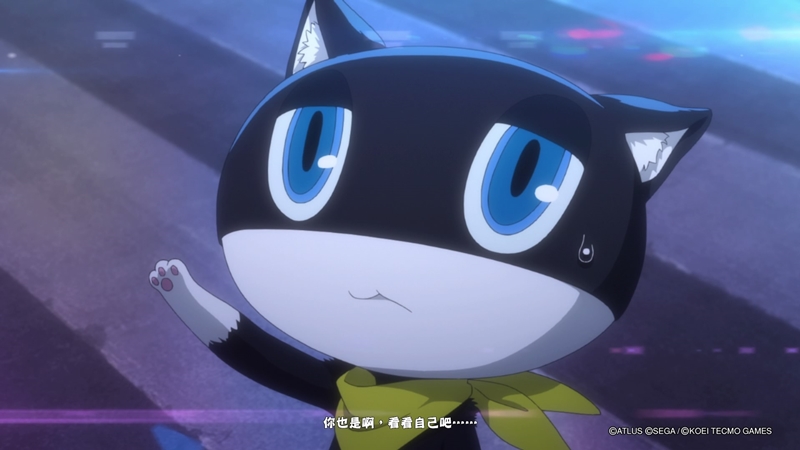 The narrative in Scramble takes place six months after the events of Persona 5, where Joker and the other Phantom Thieves of Hearts decide to meet up in Tokyo and head off on a camping trip during the holidays. However, they are quickly alerted to a new threat presented by the "Jails", which represent alternative forms of reality. After befriending a mysterious A.I. named Sophia and finding out that people who are attacked in Jails suffer strange effects in real life, the gang teams up with police officer Zenkichi Hasegawa to track down and confront the perpetrator.

Now that we know roughly what's going on in Scramble, let's head back to the game. Despite the difference in combat presentation, the rest of the aesthetic package, especially the music and graphics, is undisputedly Persona. And by that, I mean it's actually quite satisfying, although I found that the eye-popping visual flashiness that's an unwritten staple in Musou games can be slightly lacking at times. We'll talk about this in greater detail later.

Nevertheless, the environments are pretty well done: the Jails embody mostly dark and neon-tinged colours, which helps to accentuate the series' edgy vibe, while the non-fighting areas feature a variety of well-defined Japanese cityscapes.

The audio aspect is on point too, and this is probably my favourite part of this game, excluding Futaba Sakura. The beats easily got me riled up for fights and the battle soundtrack just makes you feel oh-so-badass as you rain combos and Persona skills down on your enemies. For as long as the battle lasts, that is. 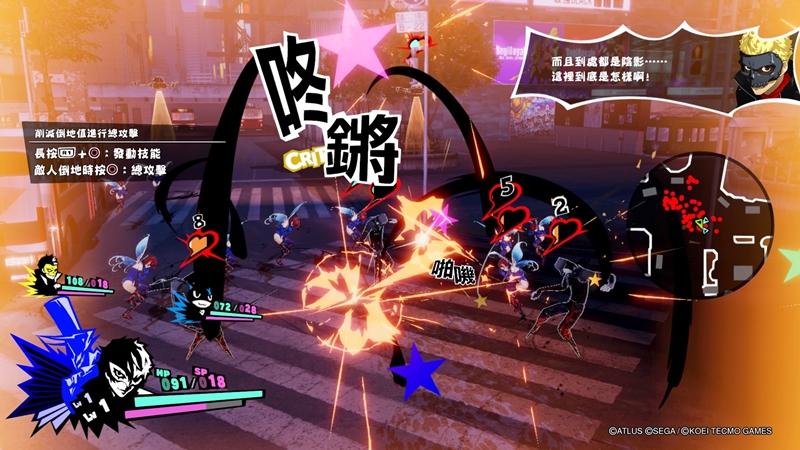 Which brings me to my next point: the combat itself. I'll just be upfront here: even though this aspect of the game is decent in and of itself, I have to admit I've certainly played better, especially with regard to the Musou elements.

The duration of fights is also somewhat unsatisfying. In most Musou games, a big part of the fun comes from being able to chain different inputs together into fluid combos, thus maximising the hit counts (and player satisfaction). Then you do it again, and again, and again. That not only lets you get more invested in each character's move set but also nets you some measure of a challenge because you're always on your toes. However, with Scramble you don't exactly get into fights, but rather "scuffles", in the sense that they're over almost as soon as they begin. I find this takes away a large portion of the satisfaction for me because I'm done with almost every single fight even before I have a chance to feel the adrenaline rush. 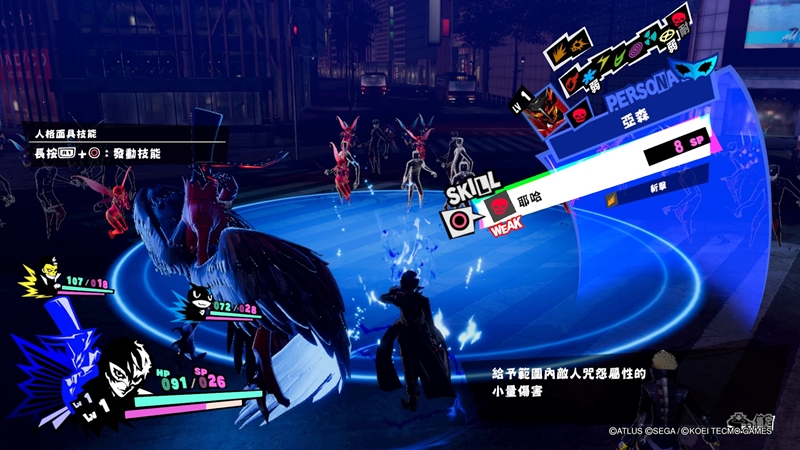 Sure, you do get fancy moves and interactions here and there to jazz things up, like mini-finishers, team attacks, or environment assists. For example, Joker can jump from streetlight to streetlight, then crash down on the enemies below. However, the game tends to run through its supply of tricks (and enemies) faster than most of its counterparts in the hack and slash genre, and you're soon back to running around levels and making small talk. I'll admit that I quite liked the array of Persona abilities you access via R1, they're really cool to watch and quite diverse, but there is also something to be said about how overpowered they feel.

Basically, it's possible to breeze through an entire fight, boss, and all using nothing but Persona abilities. Although you could argue that usage of such skills is limited by the SP Gauge, it's worth noting that refilling it isn't a difficult task at all. Just bring a bunch of items (which can be very easily acquired) with you and you'll be able to throw your Persona abilities around like water. Coupled with the fact that they can easily one or two-shot most of the enemies in the game even at higher difficulties, and the aforementioned point about fights ending way too quickly, the challenge factor certainly leaves much to be desired.

Who's this guy supposed to be? 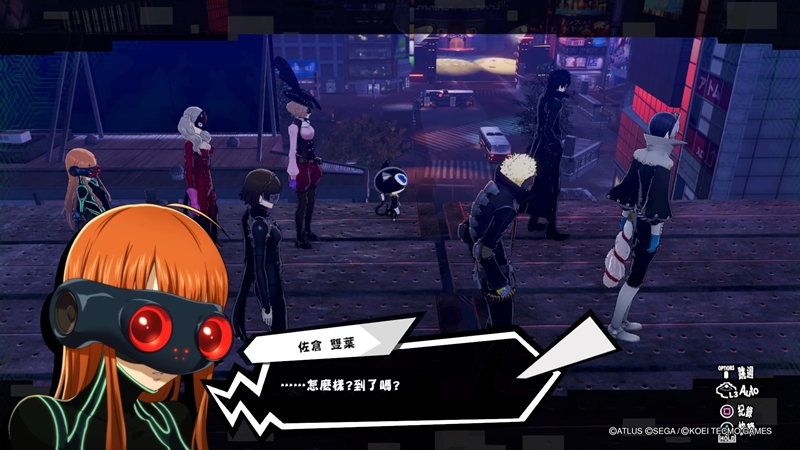 Also, like many other anime-inspired games or those with a storied history like Final Fantasy, Scramble has what I'd like to call a "resonance" factor too, which can be difficult to overcome if the groundwork isn't well-established. Essentially, the game comes with an unwritten label that states it is best enjoyed by folks who are already familiar with the series.

For absolute newbies like me, who don't have the faintest idea (much less a detailed understanding) of what the whole Persona gig is about, it can be a lot more difficult to "resonate" with the characters and in turn, appreciate the game. 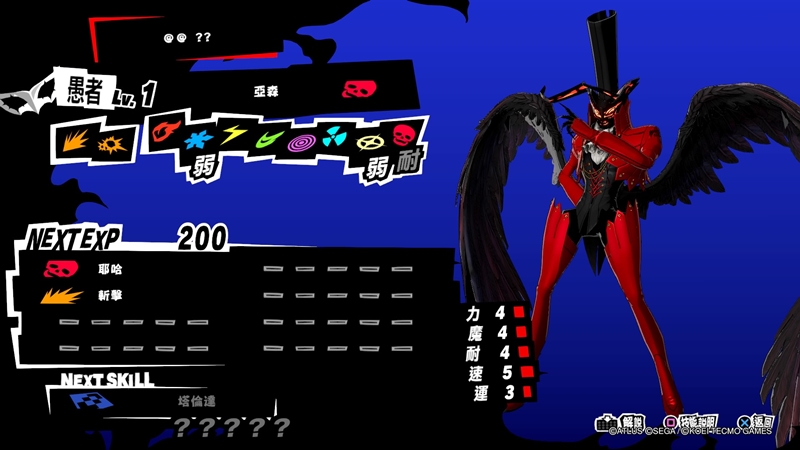 Not that you can't enjoy it, of course, but those who are already well-acquainted with the series will definitely have an easier time getting into the flow and the atmosphere of Scramble. For those who aren't, however, it's just like watching a movie you don't really understand with fancy fight scenes inserted on occasion.

For instance, at the initial stages of the game, Joker and gang arrange for a short get-together after having spent some time apart. When they finally do meet up and exchange courtesies, it felt like I (as the player) was expected (borderline obligated) to be as familiar with everyone as Joker was. Obviously, this means that I couldn't get into the "groove" as easily and effectively as I would have liked, and as such, I went through most of the interaction scenes with a large question mark floating above my head. 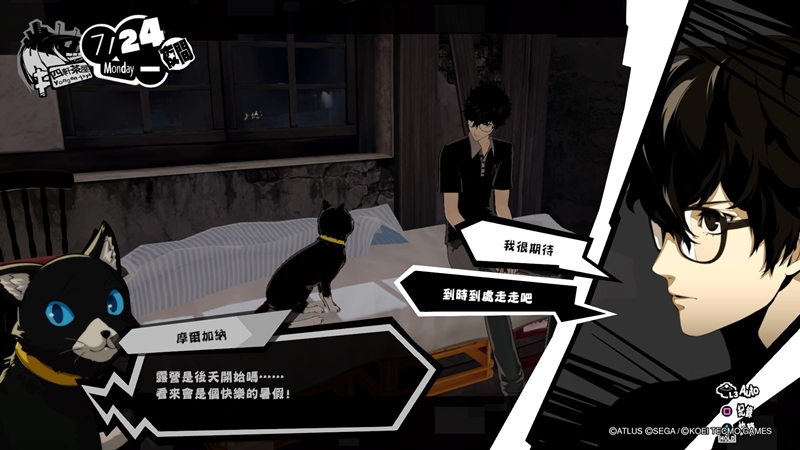 Which is to say that this game is one meant for the dedicated fans, and not so much as an entry into the Persona series nor the Musou genre. Putting aside the familiarity aspect, the main reason is that it's trying to wear too many different hats at once, which is actually rather funny when you realise the series is literally about people adopting various personae.

In layman terms, it has an identity crisis. A large portion of it is heavily skewed towards its story, while the Musou and exploration bits feel a little incomplete in and of themselves. It's like they were tossed in just to make it feel less like a family sitcom. Such approaches have actually worked in the past by virtue of a series' popularity, but unfortunately, this isn't one of those times. It does have a few redeeming factors, of course - great aesthetics, decent combat, and probably an entertaining narrative if you can catch the drift early on.

But that can only bring you so far. For the most part, though, there's way too much talking and too little action to really let the aesthetics shine. Essentially, the resulting jumble seems to have backfired and turned Scramble into a literal representation of the word, because as things stand, it's a "jack of all trades" game that's honestly quite confused as to what it really wants to be.

Write a Review
Compare This | Specifications
Combat is aesthetically pleasing and fancy
Excellent music, especially in fight scenarios
Narrative is decent if you can get invested in it
Futaba Sakura
Fights end quickly and generally lacking in challenge
Persona skills are somewhat OP and easily spammable
RPG aspect feels a little forced
Less talk, more action please
Our articles may contain affiliate links. If you buy through these links, we may earn a small commission.
Sponsored Links