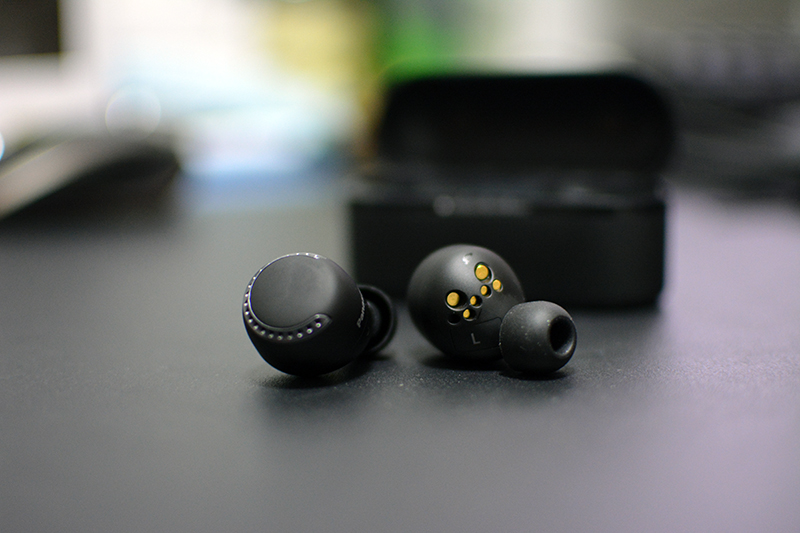 Plus, it touted something that few other brands offer: hybrid noise cancellation.

Two months into testing the earbuds, it is this feature that sets the RZ-S500W apart from other true wireless earbuds, even household audio names like Sennheiser. We can say with no hesitation that Panasonic has got something truly remarkable on its hands, packed in a relatively attractive package with decent software support.

And at a launch SRP of S$349, it’s not too hard on the wallet either, matching the admittedly aging Sony WF-1000XM3 while undercutting higher-priced competitors like the Apple AirPods Pro and Sennheiser Momentum True Wireless 2.

At first glance, the RZ-S500W doesn’t look like anything special. It's plain, nondescript charging case comes in black or white matte plastic, with no extra design flair that sets it apart from the host of other cheap true wireless earbuds thronging Lazada or Shopee catalogues. A barely visible Panasonic logo embossed on the cover of the case and a glossy strip cutting horizontally across its body are the only two details that might catch your attention if you look closely.

I also found the dimensions of the case also a little odd at first – unlike most other “fat” true wireless earbuds cases, the RZ-S500W is pretty svelte. But even though I wouldn’t exactly call it very pocketable, it's slim enough to slide in and out of my jeans without much of a struggle, so that’s a plus. 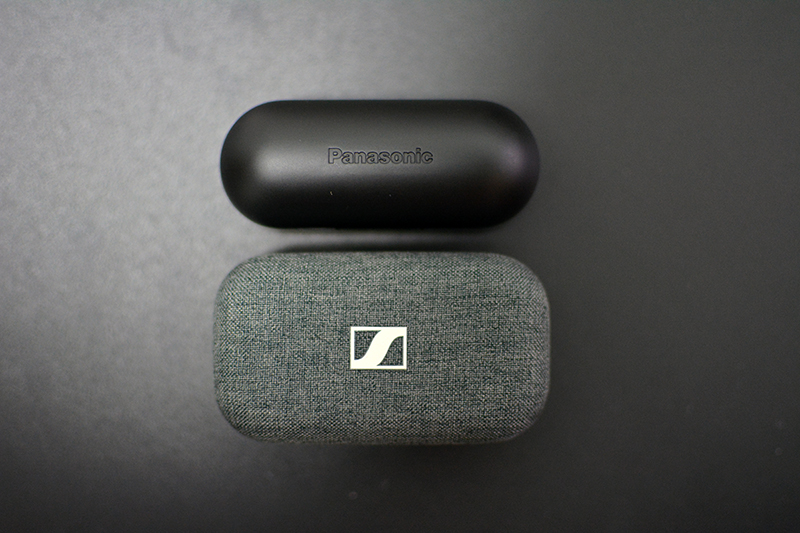 Overall, it’s difficult to endear myself to such a stark and no-nonsense design, but there is also beauty in such a utilitarian approach. And if this is what helps to keep the pricing down, then I’m all for it. After all, it’s not like I’ll be staring at the case a whole lot. My real gripe with the case is that you can't charge it wirelessly.

Things start to pick up once you lift the lid. The RZ-S500W earbuds are pleasantly round, made of soft matte plastic with a half-ring metal embellishment running along the edges. The holes on this metal strip house the LEDs and mics needed for noise cancellation, which is a very attractive way to combine both form and function. An additional three white LEDs on the front of the case indicates the remaining battery life. 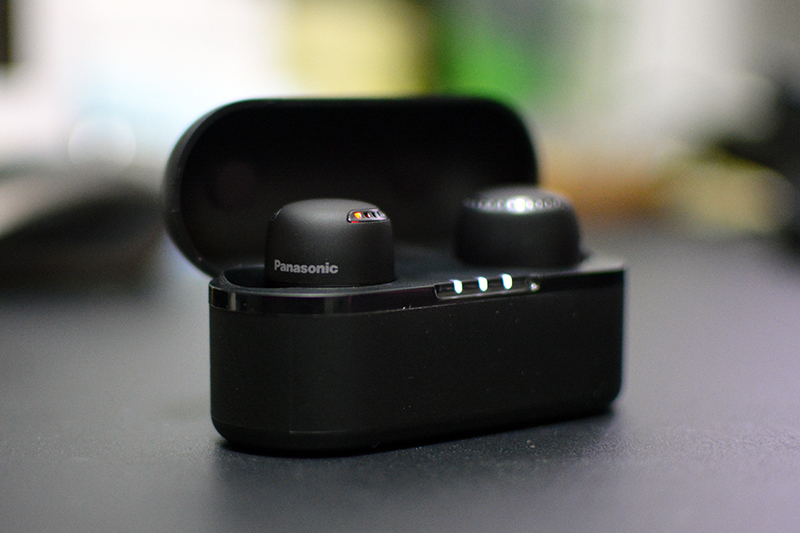 Despite all the holes, the RZ-S500W is IP4X rated, so it will be able to withstand splashes of water from any direction. This makes it a decent pair of workout buds, and I could take it for several runs without any issue. Despite being rather fat, the earbuds are still pretty lightweight and could sit in my ear comfortably without constantly trying to escape. It took a little trial and error to make it work, but a few twists were all it took to settle it in.

Like most other competing true wireless earbuds, the RZ-S500W is controlled via touch. Normally, this is just something I’ll have to get used to, but Panasonic has made the learning curve even steeper by not providing an overt tutorial for the user. Instead, you’ll have to dig into the product manual within the box until you find the relevant instructions.

Frustratingly, Panasonic could have easily included these instructions in its decent companion Audio Connect app, but neglected to do so for some reason. I say “decent” because while Audio Connect does most of the things we expect a true wireless earbuds companion app to do, it does come with a few glaring omissions. 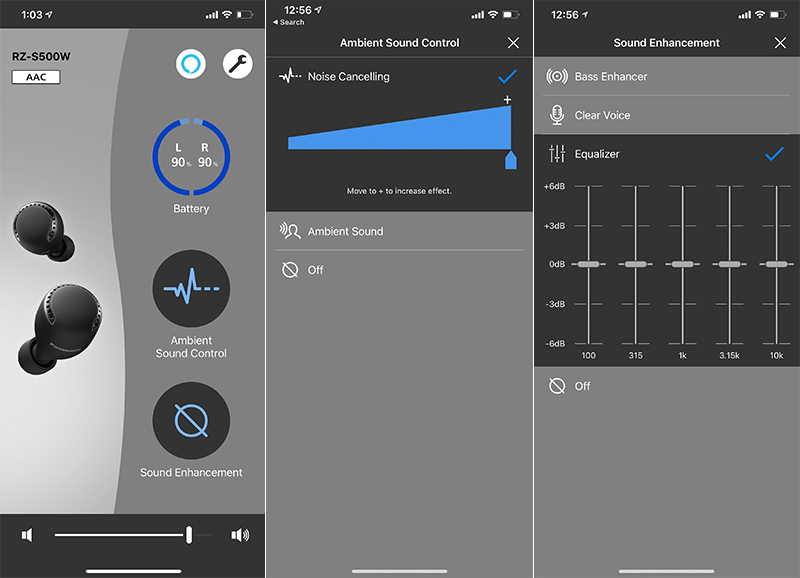 Features such as toggling noise cancellation and ambient sound as well as a built-in equalizer, are par for the course. I also like how the app included an option to prioritise either sound quality or connectivity, the latter of which defaults to a low-quality codec (SBC, for you audio geeks out there) so you don’t get connection drops in environments with lots of signal “noise”.

It also has a few extra goodies that most of its competitors don’t offer, including a nifty “find headphones” feature that pins down the last known location of your earbuds on a map – similar to Apple's AirPods and the second-generation Google Pixel Buds (through a firmware update this August). It won't help you pinpoint the exact location of your buds but at least it'll let you if they are still in your vicinity or if you dropped them while you were outside.

However, the app falls short of providing a flagship-level user experience and there are a couple of areas that felt jarring. For one, its most interesting feature is boldly advertised on the app’s front page but is unavailable in Singapore: Amazon Alexa integration. Unfortunately, Amazon’s virtual assistant is not officially supported on our little red dot, so there’s no way to download the app and sign in to use the feature. Fortunately, you can swap this out to either Siri or Google Assistant, depending on your smartphone. 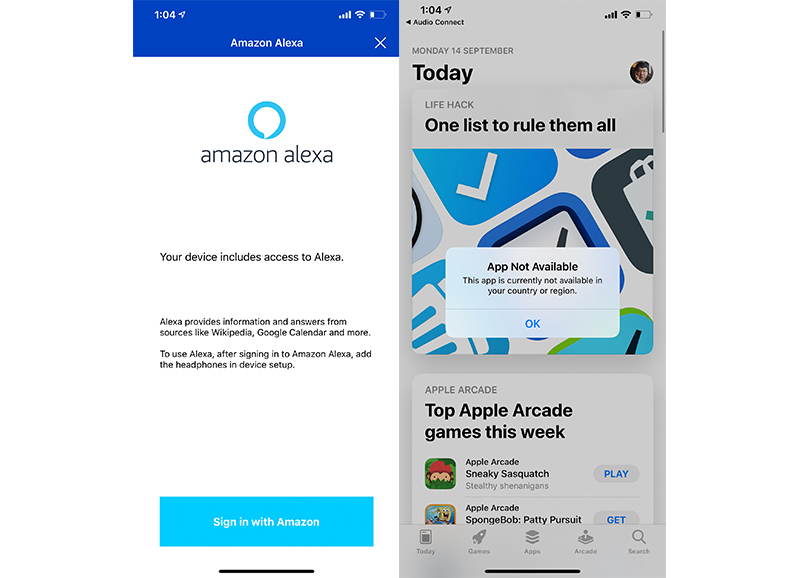 You also cannot remap the touch inputs of the earbuds. This means I had to grudgingly open up the product manual again and attempt to once again memorise all the specific controls. Hopefully, Panasonic fixes this in a future update.

Finally – and this is more of a personal nitpick than anything else – the app experience looks like it was designed in the late 2000s and elicits no pleasure from usage. Like the charging case, it’s clear that Panasonic went for function over form in the RZ-S500W. There’s nothing wrong with this approach, but for a set of earphones that perform as well as they do, I would have hoped for something that’s sleeker and stirred up a little more emotions.

On a more positive note, battery life exceeded expectations. Panasonic says the RZ-S500W is rated for 6.5 hours of playback on a single charge, and 19.5 hours total with the charging case (both figures with active noise cancellation on). Our real-world tests pegged the number close to around 6 hours of use per charge, which is in line with Panasonic's claims and our expectations of true wireless earbuds in 2020.

As I mentioned earlier, there's no wireless charging. Instead, the RZ-S500W charges via USB-C and Panasonic provides a USB-C to USB-A cable for this. Fortunately, it features quick charging that can juice up the battery for 70 minutes of listening time in just 15 minutes.

The RZ-S500W offers a truly out-of-this-world noise-cancelling experience that surpasses every other pair of true wireless earbuds I’ve tried. This is because of its hybrid active noise cancellation (ANC) set-up, which cancels out the noise both outside and inside the earbuds.

A quick primer for those who are not familiar. Most noise-cancelling headphones use either feedforward or feedback noise cancelling, which essentially refers to where the mics responsible for noise pick-up sit. Feedforward ANC places the mics outside the cups, and feedback ANC has the mics live inside the cups. The ambient noise that these mics pick up are then cancelled out using the magic of software.

A hybrid ANC uses both of these implementations and it's typically only seen in larger over-ear and more expensive headphones. Hybrid ANC can suppress a broader range of frequencies, and Panasonic is one of the few brands who have managed to shrink it down to the true wireless form factor. 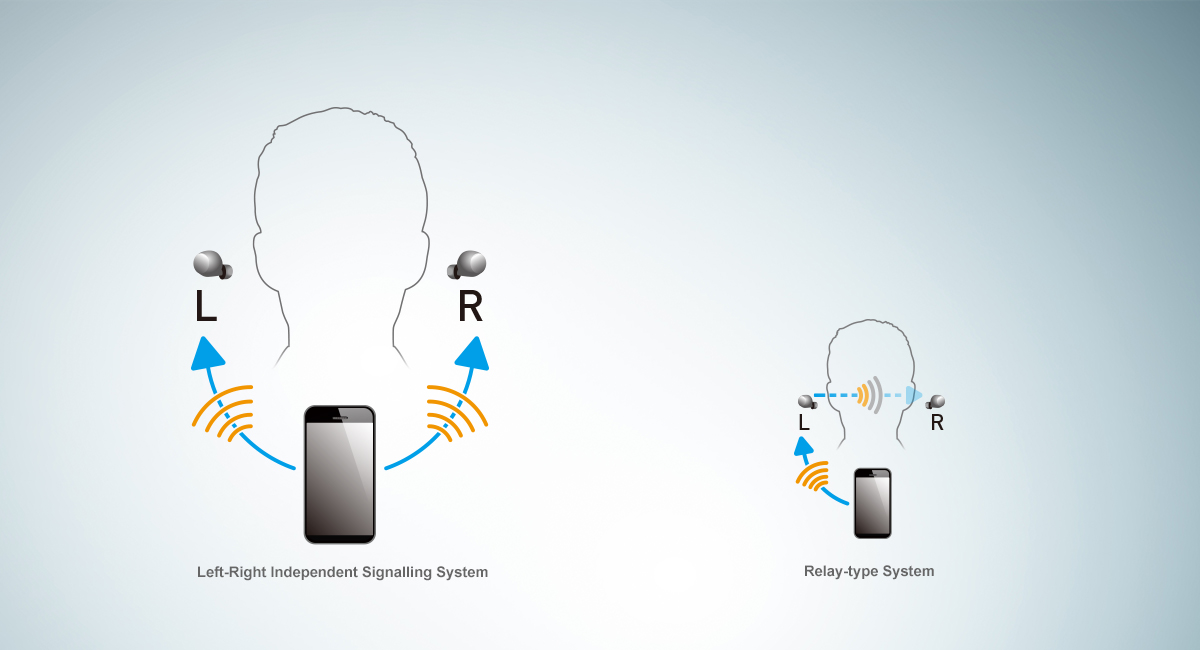 Its performance rivals some of the very best true wireless earbuds on the market, such as the popular Apple AirPods Pro. In my experience, I believe the RZ-S500W actually edges ahead of the AirPods Pro a little thanks to a more comfortable fit and a more complete app experience. The AirPods Pro tend to make my ear ache after some time, no matter the ear tip size, but as usual your mileage will vary on this front.

The RZ-S500W had no problem putting a lid on low-frequency and repetitive noise, such as air conditioning or the drone of airplanes blasted through my laptop speakers. But what was mind-blowing was how it could even dampen the noise of my own heartbeat and footsteps. With no music playing, I toggled the ANC off and on repeatedly via the app just to marvel at how noticeable the difference is.

The effectiveness of the ANC is amplified by the good seal provided by the silicone ear tips, of which Panasonic has kindly provided five pairs so you can find the best fit for yourself. Paired together, it was as if the outside world ceased to exist the moment I hit play. Even the clickity-clack of my noisy mechanical keyboard failed to penetrate the earbuds.

Thankfully, the ANC did not cause me any disorientation or discomfort over hours or use, but the app lets you dial down the power of the ANC should you run into this issue.

Thanks to the superb ANC, the RZ-S500W was allowed to shine in the sound quality department. Its 8mm dynamic drivers produce an enjoyable sound with an emphasis on bass that doesn’t overpower the clear upper-midrange frequencies. This means that if you enjoy listening to most mainstream genres of music such as pop, hip hop, and R&B, you’ll have a good time with the RZ-S500W’s overall warm soundstage.

Indeed, I ran down the Top Hits Singapore playlist on Spotify and enjoyed the punchy bass and distinct vocals on trending pieces ranging from Ice Cream (BLACKPINK, Selena Gomez) to Over Now (Calvin Harris, The Weeknd). You’ll also get a kick out of rock songs like Reptilia (The Strokes), with the thumping bass lines and drums playing nicely with the strumming guitars and vocals that rise above it.

The RZ-S500W is also no slouch on my favourite musical theatre and classical pieces, though it’s not as immersive here due to a more subdued performance in the higher frequencies. Nonetheless, it could competently handle anything from Les Misérables to Hamilton without any jarring issues.

On the upside, Panasonic offers EQ adjustments through its app, so you can tweak the sound signature to your liking until you get the best personal listening experience out of the earbuds.

Call quality, on the other hand, is nothing to shout about. Panasonic claims that its six high-performance MEMS microphones have a built-in “unique labyrinth cabinet structure” that can suppress wind noise, but I tested it out on the roof of a windy multi-storey car park and the other party struggled to hear me. I gave up and switched back to the phone.

Indoors, however, the mics performed decently, and I could take several calls without too much trouble. 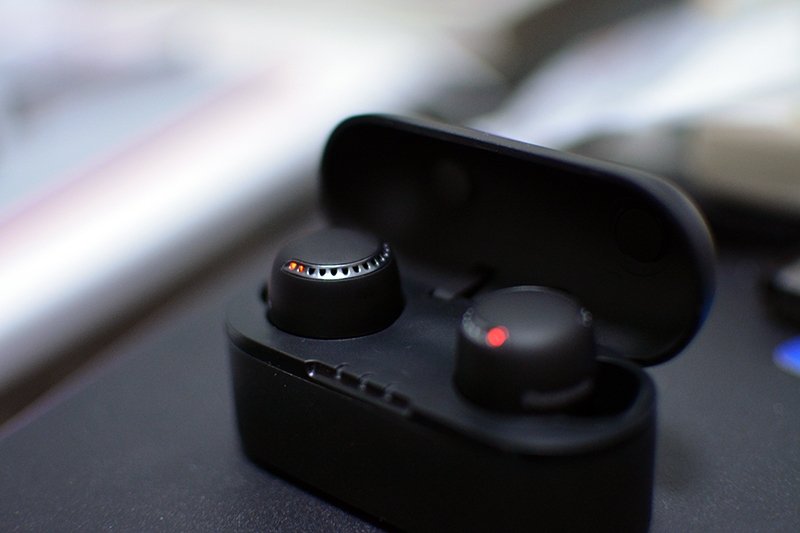 Panasonic’s first set of true wireless earbuds is a very strong contender in a market segment that has exploded in popularity. Despite its nondescript looks, the RZ-S500W offers top-notch active noise cancellation and an enjoyable sound that matches what the likes of Apple and Sony have to offer.

Yet, it still falls short in several small aspects that prevent it from offering a true flagship-level experience in this day and age, such as a dated app design and lack of wireless charging. Perhaps we’ll have a better experience with the recently announced EAH-AZ70W, which is also a set of Panasonic earbuds but is marketed under its Technics brand, typically reserved for premium audio products. But that’ll be a story for another time.

You may also want to hold out for Sony’s overdue upgrade to the WF-1000XM3, which is rumoured to drop in time for the holiday season this year.

But for now, if you’re in the market for true wireless earbuds that offer outstanding noise cancellation and great sound quality at a relatively sane price, you could do a lot worse than the Panasonic RZ-S500W.