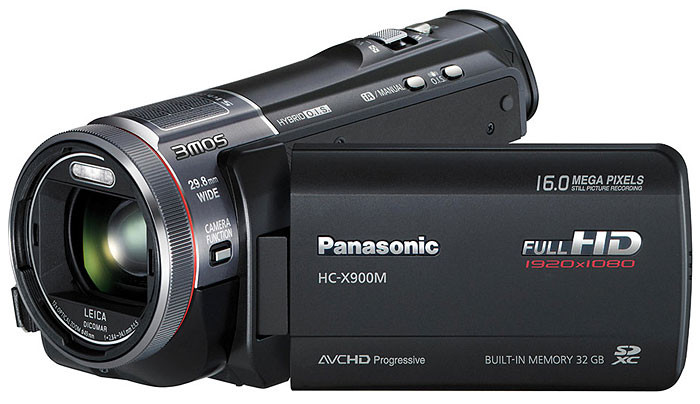 Unveiled at CES in January, the HC-X900M is the successor to the HDC-TM900, a camcorder that walked home with our Editor’s Choice award for Best Digital Video Camcorder of 2011. Panasonic has been adopting a ‘if it ain’t broke, don’t fix it’ philosophy for a few years with its flagship consumer camcorder, and has done it again for the HC-X900M. Design-wise, it isn’t a huge departure from the HDC-TM900. While the HC-X900M is slightly longer and heftier, the general styling, the positioning of the external controls, and the placement of the ports have for the most part remained unchanged. Maybe in an attempt to create a more serious look, instead of glossy plastic, Panasonic has opted for a matte finish this time round for the back of the LCD and the top of the camcorder.

Full HD camcorders by Panasonic are typically divided into two camps: lower-end ones that use a single-chip sensor system (1MOS), and higher-end ones that use a 3-chip sensor system (3MOS). Being the flagship model, the HC-X900M falls in the second group, utilizing three 1/4.1-inch CMOS sensors to capture the red, green, and blue elements separately. For nerds, know that the HC-X900M now incorporates a pixel-shift technology to double the resolution in both the horizontal and vertical directions. This is achieved by way of offsetting the green sensor relative to the other two sensors by half a pixel in both directions. While this results in 4K2K data volume, the final output resolution remains at full HD 1,920 x 1,080.

The Leica Dicomar lens still offers 12x optical zoom, but the widest end is now at 29.8mm, versus 35mm on the older model. We certainly welcome this move, as this makes the camcorder more flexible for indoor use. The maximum apertures at both ends remain at F1.5 and F2.8. The touchscreen LCD also stays at 3.5 inches, but now boosts a much higher 1,152K-dot resolution. It’s a glasses-free 3D LCD too, which means that you can watch your recorded 3D footage on it without any 3D glasses. That being said, the HC-X900M doesn’t record in 3D natively; you’ve to buy a separate 3D conversion lens. And in case you’re wondering, no, this conversion lens (VW-CLT2) isn’t the same as the one used by the HDC-TM900 (VW-CLT1). In addition to the improved locking mechanism, the VW-CLT2 is smaller and has a larger aperture (F2.0 vs. F3.2) than its predecessor. A 0.24-inch electronic viewfinder that extends outward for about 2cm is also present above the rear battery pack.

Despite the increased size and weight, the HC-X900M isn’t a difficult camcorder to handle. Your fingers should find it easy to wrap around the curved body comfortably (just as we did), with the index finger falling naturally on the zoom toggle at the top. When asking a colleague of ours with a much larger palm, he felt no discomfort with the grip too, though we noticed that his little finger happened to cover a fair bit of the built-in microphone near the front.

There wasn’t a lot of buttons on the last-generation HDC-TM900, and Panasonic has reduced the number further on the HC-X900M. Gone are the zoom/volume and record buttons on the bezel of the LCD, though truth be told, we hardly used them on the HDC-TM900. The menu system has largely remained the same too. The most obvious re-design comes from the main menu when you’re in Record mode. Instead of four menu tabs (Record Setup, Picture, Media Select, and Setup) that slide in from the left and take up roughly half the screen, they are now represented by four large icons that take up the whole screen. However, we didn’t notice anything significantly different once we entered the sub-menus.

We're fans of the lens ring on the HDC-TM900 as it allows us to manually control zoom, focus, white balance, shutter speed, and iris/gain settings in Manual mode. This feature is retained (thankfully) on the HC-X900M. To cycle through the parameters, you can use the LCD. A more convenient alternative is to use the Camera Function button just beside the lens. This lens ring/Camera Function combination allows you to keep your left hand on the lens. The lens ring only serves as a zoom ring in Intelligent Auto mode.

Many of the inconspicuous recording functions that we liked on the HDC-TM900 are still there on the HC-X900M. The ‘zebra pattern’ that tells which part of the image has too much light, the luminance meter, and the histogram have all come in handy on more than one occasion. While we seldom used manual focus (MF), when we did, the MF assist (where subjects in focus are outlined in blue) helped us to determine focus easily.

An important upgrade that’s easily overlooked lies in the image stabilization department. Panasonic’s Hybrid O.I.S. (Optical Image Stabilizer) uses a mixture of optical and electrical adjustments to compensate for image blur due to handshake. We had very positive experience with Hybrid O.I.S. on the HDC-TM900, and this is replicated on the HC-X900M. Now called Hybrid O.I.S. +, it’s able to detect and compensate for shake in five axes (more specifically, it now corrects for roll, in addition to pitch and yaw). We found this to be particularly useful for reducing shake that’s inevitably when one uses the camcorder while walking.

On the HDC-TM900, 1080/50p recording was done using the MPEG-4 format, as the camcorder didn’t support the AVCHD Progressive format. This is no longer the case on the HC-X900M. There are four modes for 1080/50i recording, and they too use AVCHD compression, with bit-rates ranging from 5Mbps to 17Mbps. There’s also an MPEG-4-based iFrame mode (960 x 540 at 25p). For 3D recording (using the conversion lens), you’ve two modes to choose from: AVCHD 3D with MVC (Multiview Video Coding) and SbS (side-by-side) 3D. The latter is the method employed by the HDC-TM900, and it halves the horizontal resolution; hence, we see no reason not to use AVCHD 3D that records and plays 3D images in full HD. Zooming in 3D mode is limited to 1.5x, and is digital.

In terms of autofocus (AF) performance, the HC-X900M performed very similarly to the HDC-TM900: that is, it was speedy and accurate. If you’re using the camcorder as a still camera, there’s a Touch Shutter feature where by you touch the subject on the LCD, and the camera will focus on it instantly, and take a picture. The combination of face recognition and AF/AE tracking also makes focus and exposure effortless, even when the subject is moving.

The HDC-TM900 of 2011 had an unmatched 1080p video quality. In a nutshell, we noted that its 1080p images were “sharp, with artifacts few and far between.” This was a big reason why it won our Editor’s Choice award, ahead of another favorite of ours, the low light champion that was the Canon Legria HF M41. From what we’ve witnessed from the HC-X900M, it’d take something spectacular from other brands to better the HC-X900M's 1080p video performance again this year. Artifacting and image blur were minimal too; the latter a possible result due to the improvements of the image stabilization system. Colors were for the most part accurate and vibrant. When shooting 1080/50i, you can turn on Digital Cinema mode to capture as 1080/25p.

Low-light performance of the HC-X900M is again as good as the HDC-TM900, though still slightly behind what we’ve seen from Canon’s HD-CMOS-Pro-sensor-equipped camcorders, such as the Legria HF M41 and HF G10. While there’s no successor to the G10 yet, Canon has announced the Wi-Fi-touting HF M52, and we’ll be testing it soon.

In short, overall, the HC-X900M's video performance is slightly better than the HDC-TM900's, which isn't an easy task, considering the benchmark the latter has set. On the flip side though, this difference is hard to tell if you're viewing both their footage casually. Those hoping to see a night-and-day difference are going to be disappointed. 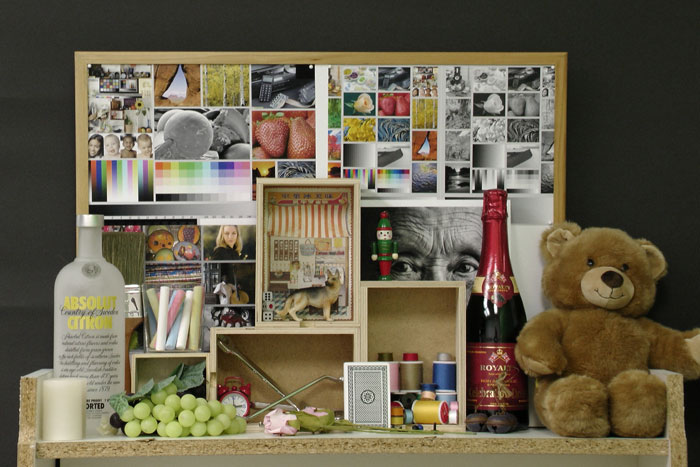 Our conclusion for the HC-X900M is - you guess it - the same as what we said for the HDC-TM900: If you're an advanced user who crave for tons of controls at your fingertips, and the best 1080p video quality possible, the HC-X900M is hard to beat. The launch price of S$2,199 is also slightly cheaper than the launch price of its predecessor a year ago. If you already have a stash of high-capacity, high-speed SDXC cards, you may want to consider the HC-X900 instead. This non-M version doesn’t come with the 32GB of built-in memory, but makes up for it by costing a good S$300 less. And for those looking for a real bargain, now's a good time to start paying attention to cut-price HDC-TM900 listings.

So, is there anything that we don’t like about the HC-X900M? If there is, it’d be that slight disappointment that Panasonic hasn’t really wowed us with its flagship camcorder for two years running. Don’t get us wrong; as we said earlier, the HC-X900M is an outstanding HD camcorder. Still, we can’t help but feel that it’s more like a refined HDC-TM900, just like how the HDC-TM900 was like a refined HDC-TM700. Then again, it’d be disastrous if Panasonic were to introduce a new technology or a fancy schmancy user interface that could rank poorly and upset all the good work it has done so far in the series, wouldn’t it? 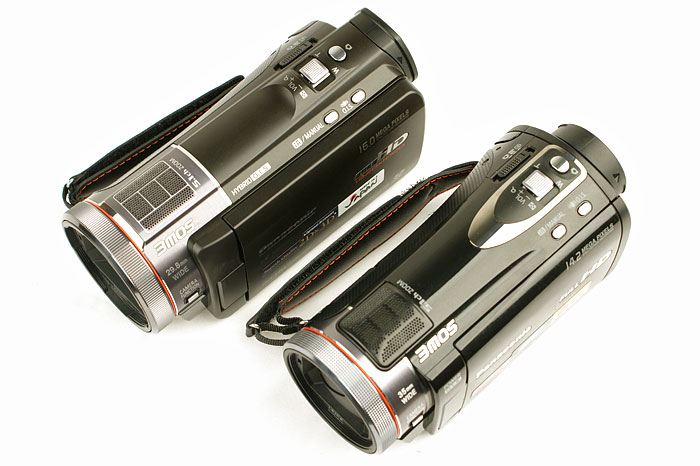