The camera system has always been one of the key features of the Reno series. Does Reno4 Pro continue to feature superior imaging capabilities? To reiterate, the Reno4 Pro has the following rear camera array:

To put some context to the quad-camera system offered, the main shooter and the ultra-wide cameras are actually the same counterparts we've first seen on the Oppo Reno 10x Zoom over a year back and use the same sensor too. Even if the Reno4 Pro forgoes any telephoto lens and the special periscope-style lens array for true optical zoom that the Reno 10x Zoom offers, the usage of the same main and wide-angle shooters do set high expectations for the Reno4 Pro.

Note that the main camera's Sony IMX586 Quad Bayer 48MP sensor outputs 12MP photos by default as it uses four adjacent pixels combined to recreate the equivalent of having larger photosites on the sensor by raising photosensitivity. Also, since there's no telephoto lens on the Oppo Reno4 Pro, all zoom functionality is digitally achieved from cropping in the shots from the 48MP sensor.

The image quality of a typical well lit daylight photo is certainly a cut above what mid-range phones can churn out, though it still cannot match true flagship phones. By that, we also meant that it doesn't quite put out the same league images as a Reno 10x Zoom, which is perplexing. Looking at the photo below, while it looks good without pixel peeping, once you view it in full size (1:1), the image is quite grainy. This is a fairly bright scene and ISO levels were low (just over a 100), yet it's not quite apparent why the image exhibits this much noise level. Is the image processor's algorithm out of whack while churning out the 12MP images? Well, shooting at the sensor's native 48MP mode didn't help either; the noise and blur is actually more pronounced, especially when viewing it in a proper imaging application. (Click here to view the 48MP photo.)

Digital zoom, meanwhile, works just as intended and in fact, we noticed some smoothening applied to the photo so it actually looks better than both the 12MP and 48MP cropped in. The Reno4 Pro offers up to 10x digital zoom, so this is what you'll get:- Oppo has also claimed that there is an Ultra Clear Mode, in which the phone can take photos of 108MP! However, finding and activating this mode is not intuitive. It took me quite a while to figure out that it’s hidden under Pro Mode, XHD option.

Yet, the 108MP photo also suffers the same effect from 48MP mode - a notable amount of noise is retained, underscoring that sometimes, pixels are not everything. While we certainly understand that AI processing has a heavy hand to play in this mode, it probably hasn't yet progressed enough to overcome our misgivings:- Camera capability aside, Oppo's Reno4 Pro's camera app boasts a fair bit of tricks to fast track an ideal output that would look great on your social posts, so we tried exploring some of these features in the next few sections.

What really shines in Oppo Reno4 Pro is its AI Color Portrait Mode, in which the phone can, in an instant, detect a person's face and colorize the person, while rendering the background monochrome with bokeh effects to boot. You get to view the expected outcome in real time and there’s no processing lag to this feature, which highlights the fast image processing capability of the Reno4 Pro even with its mid-range processor. Note that this will not work if the camera app doesn't detect a human face (yes, we tried on a figurine and it doesn't work) or if your subject isn't facing the phone. When taking portrait shots with ambient lights, say city lights, using the default shooting mode might result in a pretty ordinary looking shot. I tried mimicking the look and feel at at home with limited lighting in the dark, and the 32MP selfie camera managed a pretty good shot to capture the scene. 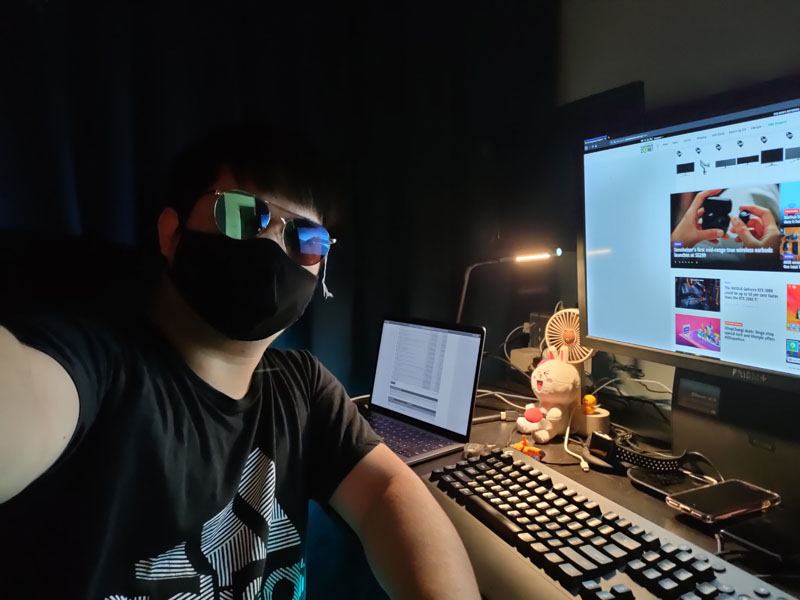 No real qualms with it but Oppo's new Night Flare Portrait mode of the same scene yielded a dramatic effect that breaths more life to the subject matter. Clearly, this mode was expressly made to dramatize the scene to give it more pop and vibrancy, as well as fusing a stylist bokeh effect. The result? A very insta-worthy shot:- The night mode works well when there is a good amount of ambient light, such as this example at Changi Jewel:- 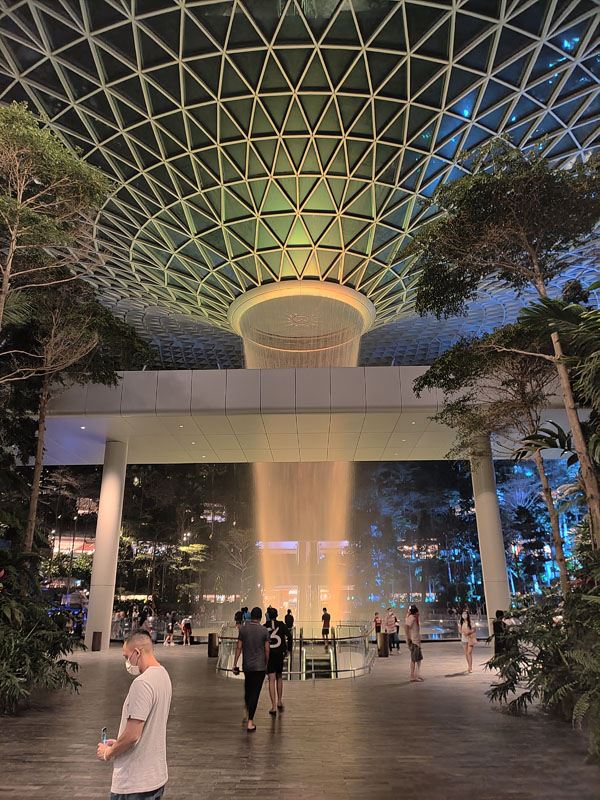 However, night mode really falters in very weak lighting conditions. This would not have been a bugbear, if not for the fact that even last year’s mid range phone, the Google Pixel 3a, is able to render better photos when faced with very low lighting levels thanks to its Night Sight feature and Google's deep learning algorithms put to good use. Ultra Steady Video mode is Oppo’s take on Electronic Image Stabilization (EIS) and has always been featured in the Reno series since the days of Reno2. In Reno4 Pro, Ultra Steady Video has also been incorporated for front camera usage, in addition to the rear cameras. This means users can now capture a selfie vlog with EIS out-of-the-box. There is also a "Pro" mode for better EIS.

After testing the Ultra Steady Video mode, the EIS works somewhat well for non-intensive motion such as walking. However, for more intensive motion such as jogging, the EIS struggles to contain longitudinal shifts, though it still manages to contain lateral shifts well. Here's a quick test of the Ultra Steady Video mode in action, without the Pro mode, and using the rear camera:-

I then tested the new Ultra Steady Video Pro mode. On first observation, it seemed like it did a much better job in stabilising the video even while jogging; however, FPS is now locked to 30fps instead of the 60fps I achieved earlier. On further comparison, you'll also note that the video quality has degraded significantly as if the video was recorded in 720p instead of 1080p resolution (even though it clearly states that the resolution is still 1080p). So the added stabilisation comes at a cost. Check out the Ultra Steady Video in Pro mode here:-

For reference on how Oppo's EIS fared in comparison with a low-cost gimbal; here is a video shot under normal settings, but attached to a Zhiyun Smooth X: