What makes the Oppo Find X2 Pro a flagship device is the inclusion of Qualcomm’s Snapdragon 865 SoC. The Qualcomm processor offers not only one of the highest possible speeds and processing power of the current generation of mobile processors; it also comes with 5G support (both NSA and SA networks).

For a refresher on what the Snapdragon 865 processing unit houses, you can refer to this in-depth article.

That makes the Find X2 Pro another 5G-ready device, joining the ranks of other 5G-capable flagship tier devices such as the Huawei P40 series, the Samsung Galaxy S20 Ultra, and the OnePlus 8 series. While we’ve reported on several upcoming 5G-ready smartphones, the truth is there aren’t many that can be purchased in Singapore as of writing. Also, 5G networks for phone users aren’t available in Singapore yet, so it’s not a point of comparison until they’re up and running.

For this benchmark comparison, we took a combination of recent flagships and Oppo’s other recent upper mid-tier phone, the Reno2.

To benchmark the phone’s web browsing performance, we used the JetStream 2 benchmark test on the Google Chrome web browser app. The test measures a phone’s capabilities in handling a variety of advanced workloads and executing codes. JetStream 2 is an updated version of older benchmarks, such as the first JetStream and SunSpider.

While some phones come with custom-made web browsers, We always run this benchmark test on Chrome as it gives the best indication across devices, processors, and OS platforms - whether iOS or Android. Also, we would adjust the phone’s display settings to ensure that the screen doesn't turn off mid-test since this would relegate the browser's thread(s) to background processing. Where necessary, we would run multiple test instances to get a more accurate reading of scores.

If we compare it to only Android or Android-based devices, the Find X2 Pro leads the pack. It’s smooth and fast when loading webpages, so its performance matches up to its benchmark as well. 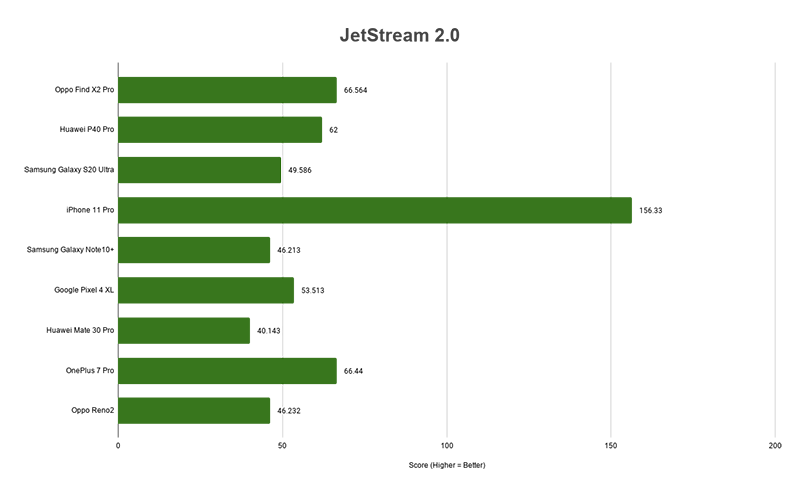 Note #1: as of 9 March 2020, all AnTuTu benchmarks were removed from the Google Play Store. This move likely arose from Google’s attempts to relieve the Play Store of apps that violate their policies. AnTuTu is working with Google to restore their app listing. For this review, we used the APK file that was available on AnTuTu’s website.

Note #2: The Oppo Find X2 Pro review unit prompted us to use its “Racing Mode” while benchmarking on AnTuTu, which allows the device to commit more-than-normal levels of system resources to the testing process. We’ve disabled Racing Mode for this review.

Again, the Oppo flagship leads the pack in the benchmarks, and this mirrored our experience using the phone across games, messaging apps, social media networks, and other tools. As our first Snapdragon 865 processor based phone review, the numbers are looking good - so far. 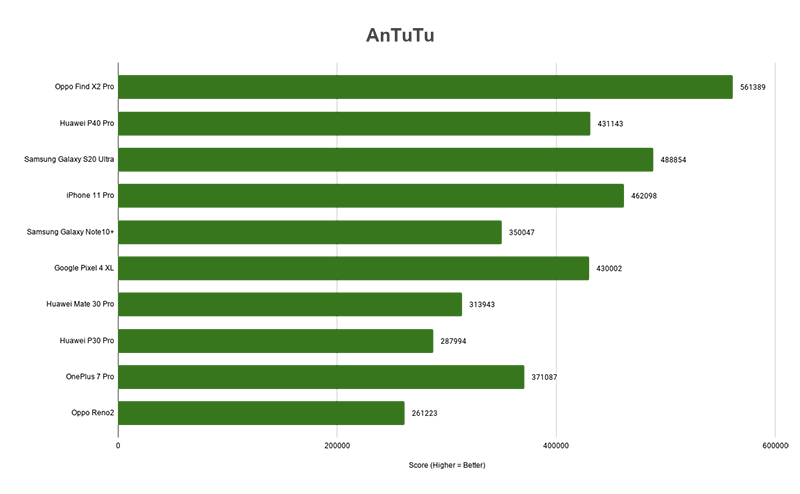 Note: the older Oppo Reno2 was tested on an earlier version of Geekbench, where scores are not comparable with the newer Geekbench benchmark. Hence, we did not include it in this comparison.

Among non-iOS smartphones, the Find X2 Pro beats all the others at both single-core and multi-core performance. On paper, it will be faster than any other no matter if your phone is idling and running due processes in the background, or if you’re running a processing-heavy app. 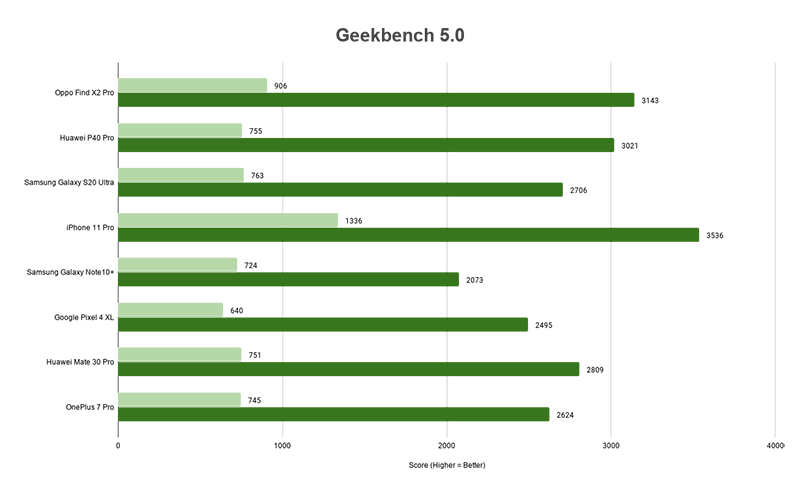 The Find X2 Pro is no longer the leader of the pack at this point, but its performance on the other benchmarks have already help cemented its position as a flagship device. 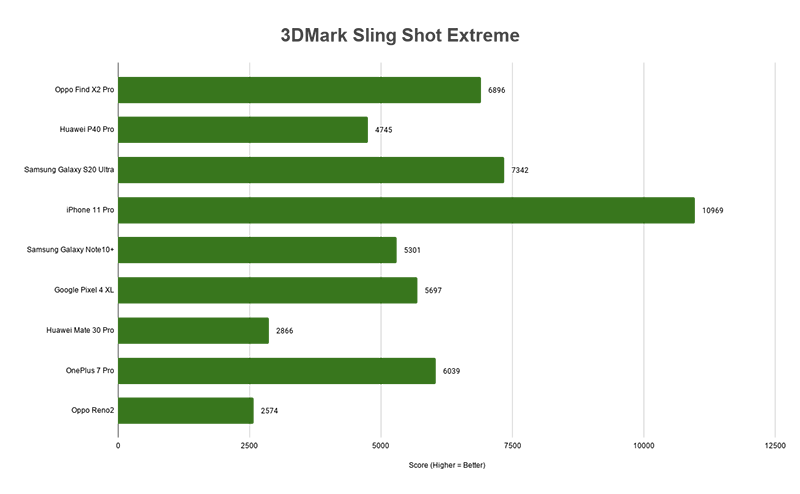 We also tested the Find X2 Pro with some game titles that can be played at 120Hz refresh rate (like Injustice 2) just to push the phone hard. It held up well, with bearable loading times and smooth gameplay. We’re happy for the Find X2 Pro’s real-world performance matching up to its benchmarks.

You’ll find the Find X2 Pro with a total battery capacity of 4,260mAh, and support for SuperVOOC 2.0 Flash Charge, Oppo’s proprietary fast-charging technology. The phone itself supports up to 65W charging power, and the charging adapter that comes with the phone is rated at 5V/2A (10W), with a maximum output of 10V/6.5A (65W). The charging adapter is inherently indispensable to the fast-charging abilities of the device.

With fast-charging, the Find X2 Pro’s battery goes from 0% to 100% in an hour or less, consistently. Without fast-charging, it takes approximately 2.5 hours for a full charge. Comparatively, it fared well enough in our battery testing to be placed in the middle of the flagship pack. 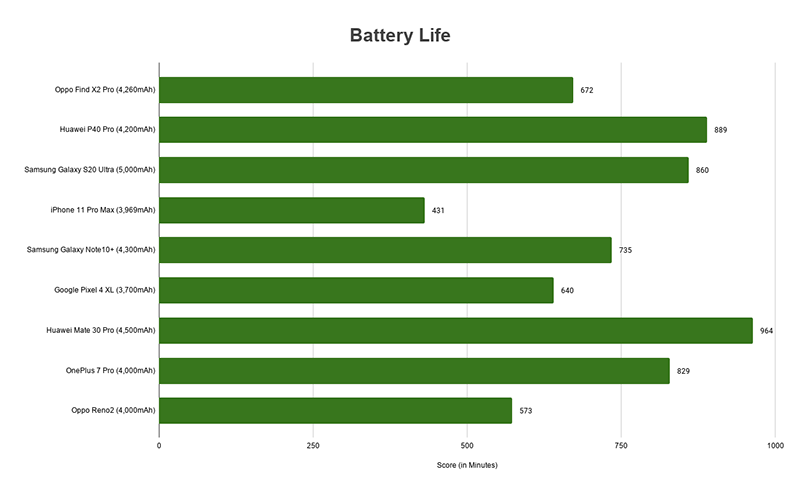 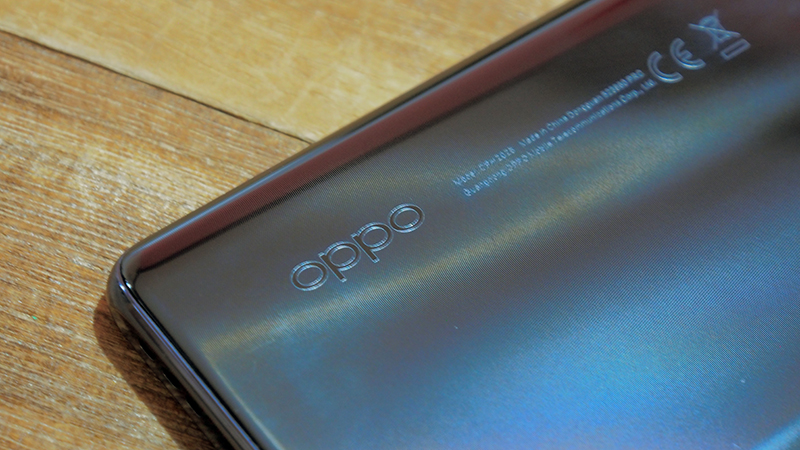 If you consider the Oppo Find X2 Pro on its own, it certainly delivers in everything it promised. It’s a beautiful 2020 flagship 5G smartphone with decent camera performance, an envious display, great speaker audio quality, high-end processing power, and reasonably good battery life with crazy-fast charging. It fits very nicely alongside some of the other 5G-ready flagship offerings out there, like the Samsung Galaxy S20 Ultra (it’s a bit of a low-blow to the Huawei P40 Pro if we want to bring up how the Oppo Find X2 Pro still has Google services attached to it).

The phone is not without its flaws. There's the lack of a microSD card slot for expandable storage, although the 512GB internal storage makes up for it. There's no wireless charging capability and the missing 3.5mm audio jack are some points of consideration depending on your existing lifestyle.

If we really wanted to pick on the phone, it would actually be its price tag. However, once you compare other phones with equivalent hardware specs and 'Pro' level options, the pricing actually doesn't seem as ridiculous. As covered on the first page, the Find X2 Pro is actually quite reasonably priced for its class and the phone comes with its own merits to make the price easier to swallow.

Perhaps a good middle ground would be to have the non-Pro option of the Find X2 officially in Singapore, giving us most of the Find X2 experience without the higher-end pricing.

That said, if you’re looking outside of your Apple-Samsung-Huawei trifecta during this upgrade cycle, the Oppo Find X2 Pro is the next phone you should be looking out for.