OnePlus One: A cheaper, better, faster phone that you cannot readily purchase 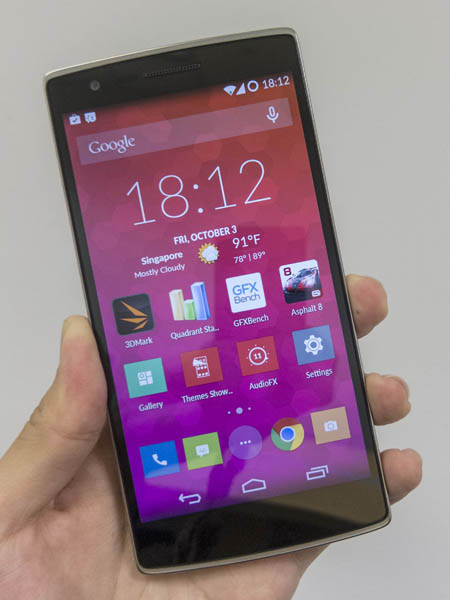 It's no secret that Android based phones far outnumber any other mobile OS device today. Given those stats, you would think most would feel and function similarly, but in truth, it's far from that.

The Android OS is widely adopted by many manufacturers, with each of them implementing their own UI overlay to differentiate themselves from competitors. However, such an action has resulted in varying user experience across different brands, with each brand pre-loading their own set of apps and enhanced features that sometimes benefit end-users (and sometimes not at all). With the exception of Google Nexus line of devices, it is nearly impossible to find a flagship phone that is isn't tied down with the aforementioned "software bloat".

Oppo once attempted to change all that with Oppo N1 Cyanogenmod Edition, which offers users an experience faithful to that of stock Android. The Oppo N1, however, did not catch on. This year, OnePlus, a company that was founded late in 2013, attempted a similar feat by unveiling the OnePlus One. "Never Settle" being its motto, it promises to deliver a stock Android experience on a high-end device (it's a 5.5-inch phablet powered by a Qualcomm Snapdragon 801 quad-core processor) , while empowering users to tweak and maximize the utility and power of the mobile phone - all for an incredibly low price of US$349.

At the time of writing this review, the only way to get your hands on this phone is to get an invite to purchase it, either from OnePlus or from a peer. Also, it does not ship directly to Singapore. Yet, interest for this phone has been very strong locally. Fortunately, the author has managed to get his hands on one for review. Does it really "Never Settle"? Is it really worth its hype and exclusivity? We find out. 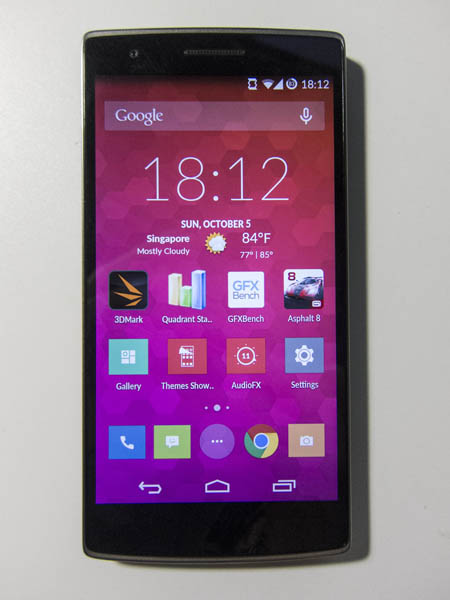 When the OnePlus One was first unboxed, it was briefly mistaken for an Oppo Find 7A. Indeed, the OnePlus One bore an uncanny resemblance to the Oppo Find 7A, with similar edges, curves, screen size, and capacitive buttons. This is not surprising, given that OnePlus and Oppo share the same investors, hence if we might speculate, it could be a case where phone designs were shared between the two companies as well. 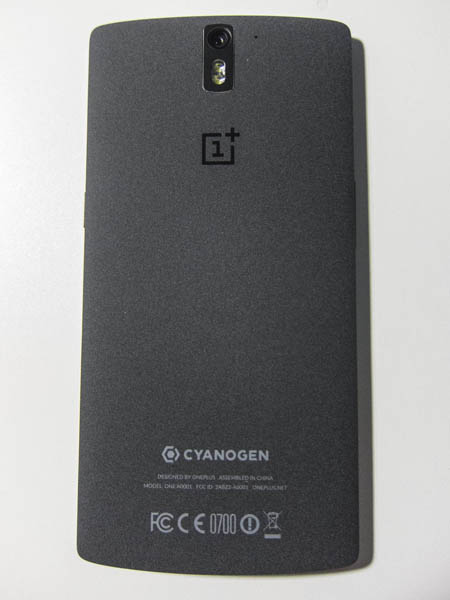 Turn the phone on its back, and that is where OnePlus differentiates itself from the Oppo Find 7A. The backplate of the phone is black, but with a fine-sandpaper-like texture to it. Holding the phone yields a different feel that is quite unlike anything else from the competition - in a good way. For one, it definitely feels more premium than the faux rubber back of the Oppo Find 7A. While it does not have the metal build of the iPhone 6 / 6 Plus or HTC One M8, neither does it have the faux 'leather premium' feel of recent top-tier Samsung devices. Yet, the OnePlus One still feels premium in a different way because of the rough rear texture, as though one is holding on to a graphite stone. In fact, the phone is aptly named "OnePlus One Sandstone Black 64GB".

Besides providing a nice grip and feel with its graphite-like backing, the OnePlus One also feels light for a phablet. At 162g, it's lighter than the iPhone 6 Plus (172g), or the Samsung Galaxy Note 4 (176g). Even though it feels light, it does not exhibit the 'flimsiness' that one may feel when handling the large iPhone 6 Plus because the latter is also rather thin (just 7.1mm). That's not to say the OnePlus One is thick, but at 8.9mm, it's slim enough to provide comfortable handling of the device without concerns of it snapping under daily wear and tear. To ensure Bendgate issues aren't a concern with the OnePlus One, this reviewer ensured the phone was carried in the front pocket of a tight pair of jeans, squeezed together with a thick wallet over the course of reviewing the phone. Even after a week of such usage, the phone did not bend. 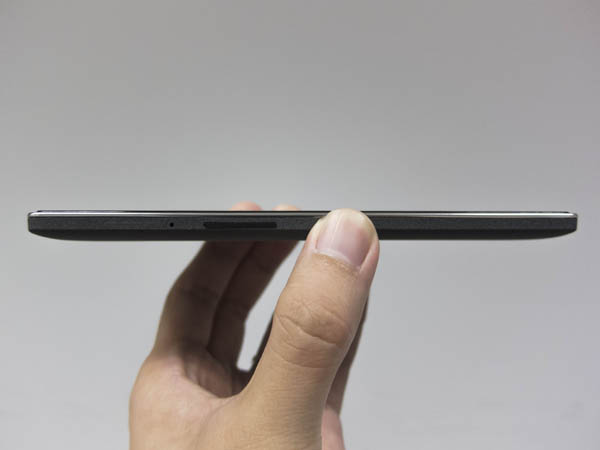 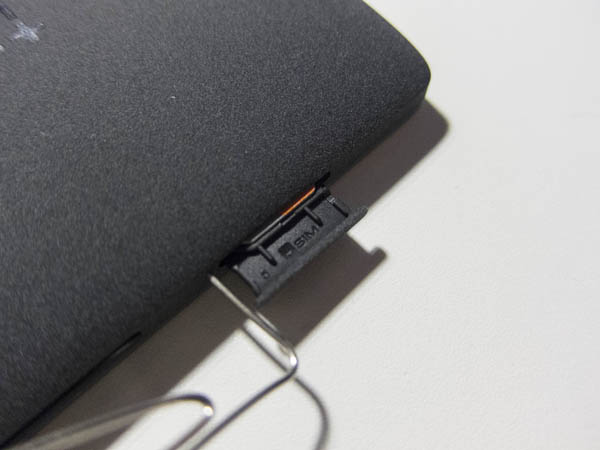 Similar to iPhones and the Nexus 5, the OnePlus One has a non-removable battery of 3100mAh capacity. There's also no microSD card slot to expand upon its internal storage. Fortunately, the phone has 64GB of internal storage space to make up for that shortcoming (and that's double the 32GB capacity of what the Nexus 5 can offer).  For cellular connectivity, the phone uses a micro-SIM card, but take note that you'll need to use a clip, or the provided eject pin, to eject the micro-SIM card tray. 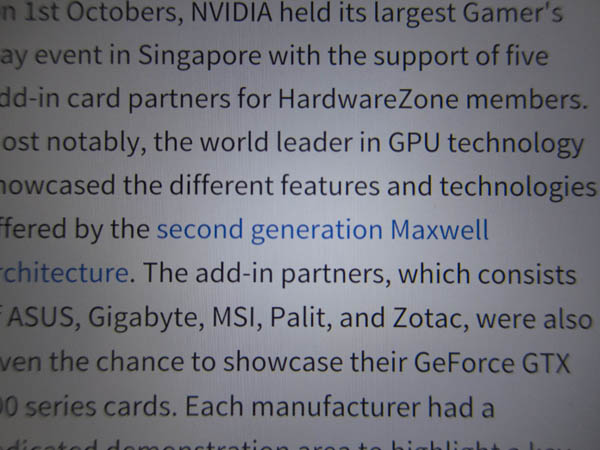 The OnePlus One sports a 5.5-inch LTPS LCD Display, with a Full HD (1920 x 1200 pixels) resolution. This yields a pixel density of 401 PPI (pixels per inch), definitely above " Retina-class", which is fast becoming the standard for most flagship phones these days. Color reproduction is above average, though it cannot match the standards set by the iPhone 6 Plus, and definitely loses out to the Super AMOLED display of the Note 4 (or any other Super AMOLED based screen for that matter).

For those also concerned about the auditory experience, the OnePlus One’s speakers are placed at the bottom edge of the phone. Sound output is audible, though not as loud as the other flagship phones; for example, the sound output was barely audible in a busy food court from our trials. Nevertheless, it has a better design consideration than the Oppo Find 7A, where the speakers are at the back of the phone, resulting in muffled output when placed on a surface.

Write a Review
Compare This | Specifications
Clean, stock Android interface
Lots of customization options
Camera can shoot RAW images
Screencasting
64GB internal storage
Affordable for a flagship device
Not readily available for purchase (invite system)
Warranty not applicable to Singapore
No microSD card expansion, no video output
Shipping costs negate some of its value
Our articles may contain affiliate links. If you buy through these links, we may earn a small commission.
Sponsored Links