Naturally, we’d be including the phone’s closest rivals, along with some of the earlier 2017 flagships like the Huawei P10 Plus and LG G6. Since there’s a healthy number of 2017 phones to benchmark against, we won’t detail the OnePlus 3T in our table. However, you can still cross-examine the figures here.

SunSpider JavaScript measures the browsing performance of a device when processing JavaScript. It not only takes into consideration the underlying hardware performance but also assesses how optimized a particular platform is at delivering a high-speed web browsing experience. Oddly the OnePlus 5 didn't manage well in this benchmark, though we didn't observe any concerns in actual usage. 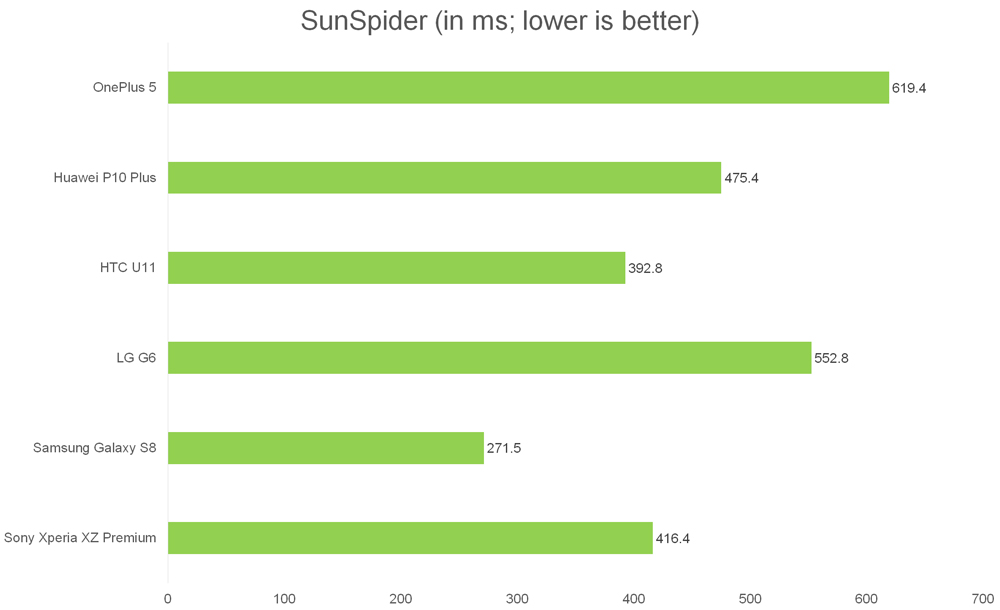 Quadrant is an Android benchmark that evaluates a device's CPU, memory, I/O and 3D graphics performances. The OnePlus 5’s numbers seem consistent with the other Snapdragon 835-based handsets we have tried. We suspect one aspect of the Quadrant benchmark is incompatible with the Snapdragon 835 and resulting in performance reporting that's lower than the LG G6 (which uses a much older Snapdragon 821 processor). 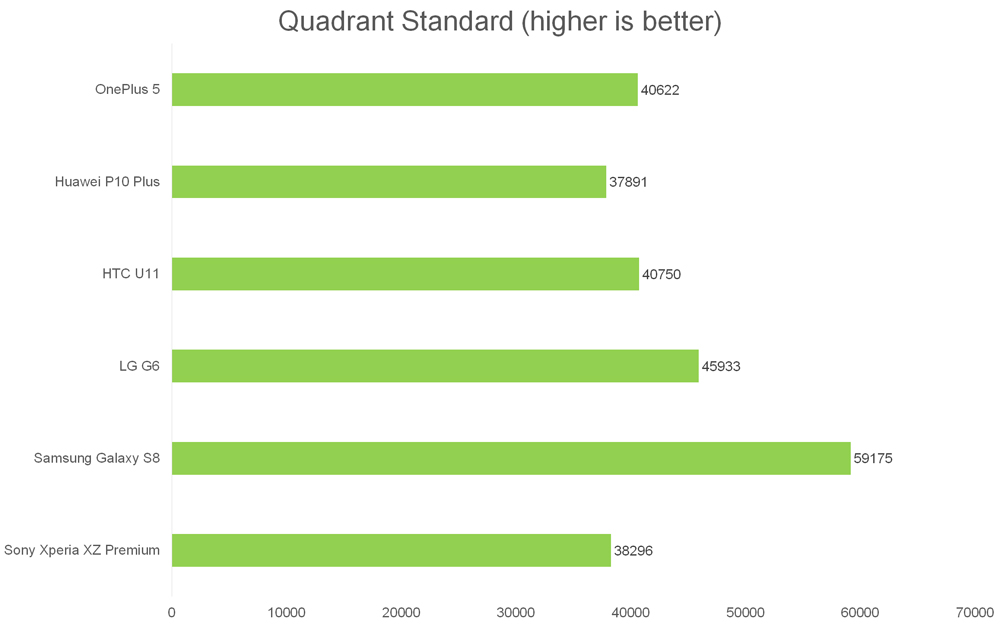 Phones with Snapdragon 835 SoC are coming in high in this benchmark, and the OnePlus 5 is no exception. It is on par with its rival, HTC U11, and it exceeds the Sony Xperia XZ Premium on paper, too. 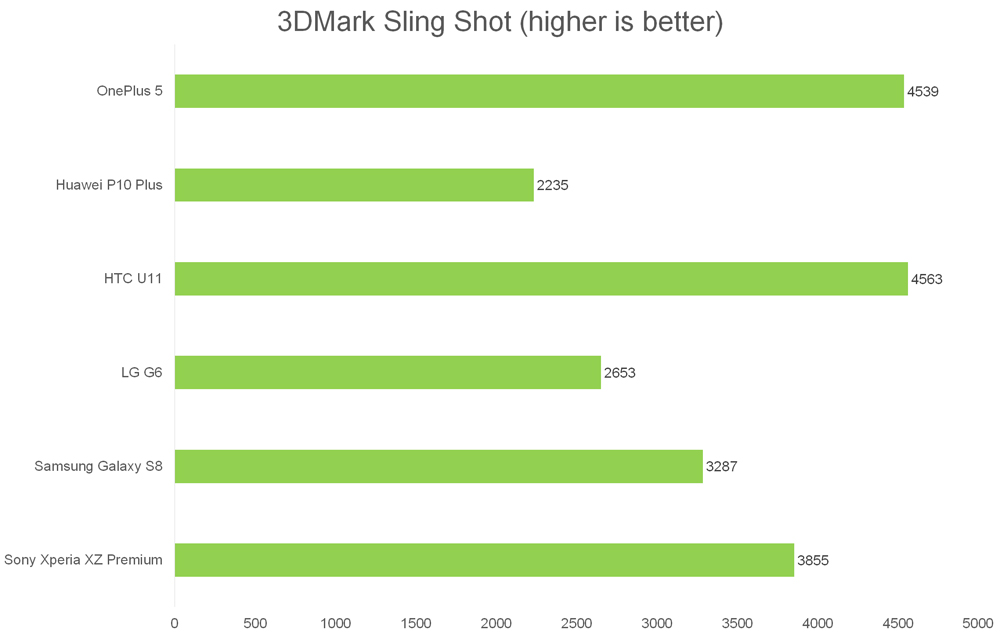 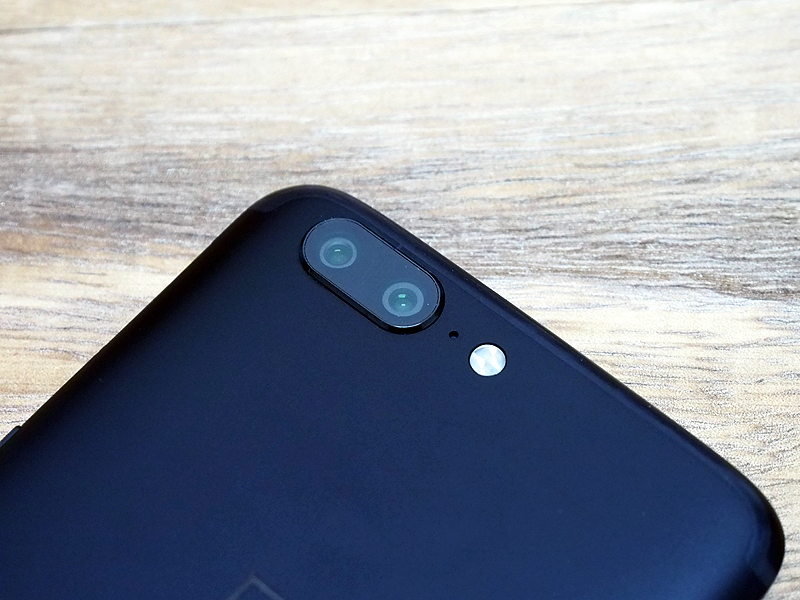 The OnePlus 5 is the first OnePlus phone to have a dual rear cameras setup.

Both rear cameras are capable of shooting in RGB (as opposed to some implementations like the Huawei P10 that has one black-and-white sensor). OnePlus 5's dual rear cameras gimmick revolves around an alternative zoom feature and an In-Depth mode, as shown below. 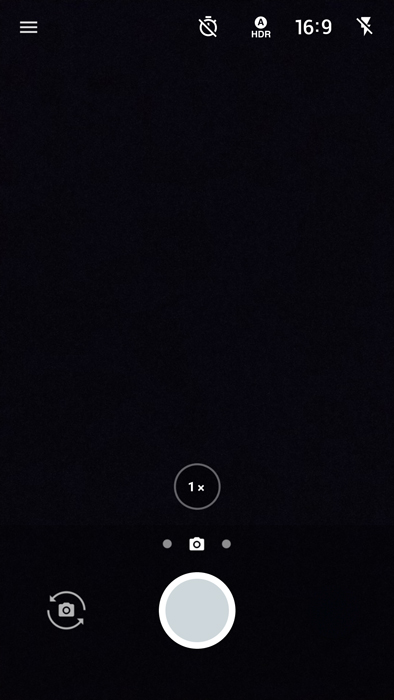 The switch between its primary and secondary rear camera happens when you tap that circular ‘1x’ option in the camera app. It then switches to ‘2x’, and the software within the phone will decide whether to continue using the main camera, or the secondary one. It’s worth noting that the secondary shooter carries a telephoto lens, but the resulting 2x zoom is a combination of optical and digital zoom – you can read more about it here.

If you swipe from right to left, you’ll enter In-Depth mode – which primarily provides digitized bokeh that helps to add a little flair to portrait photos. From our trials, the bokeh effect from In-Depth mode isn’t as refined as Huawei’s bokeh control before photo-taking, but it does the job if you give the phone sufficient distance to get the OnePlus 5 to work its magic. According to Qualcomm, the Snapdragon 835’s DSP and ISP cooperate to get a focal separation between both rear cameras before applying digitized bokeh. 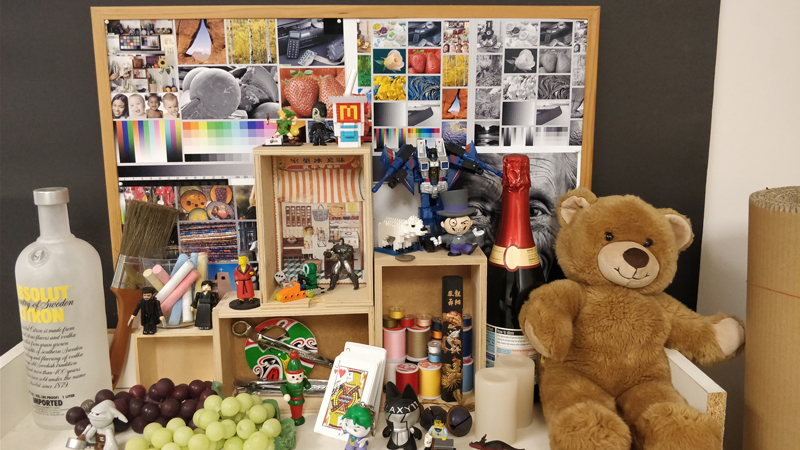 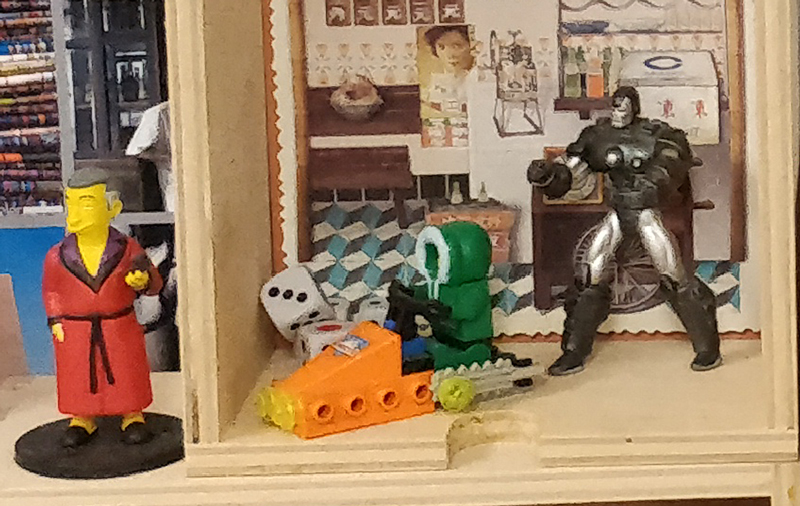 From our primary camera’s test image, we can see that the phone is capable of sharp images, vibrant hues, and accurate colors with a warmer tinge - when you don't view the picture in 1:1 ratio. The minute you see the image up-close, you can tell that needs more work with detail preservation – the focused area (center of the picture) tried to preserve as much detail as it could, but aggressive noise control resulted in artifacts and some visible noise. Contrast handling is a little diminished too – if you see the wine bottle’s label, it’s fine, but the deck of poker cards could not preserve prints since the background provided strong contrast.  The secondary camera fared much worse with even greater artifacts and poor details. Image quality is unusual for a high-quality sensor beneath both lenses, and OnePlus will need to work hard to get their imaging software right. In comparison, the HTC U11's single camera did a fantastic job in imaging performance when compared with the OnePlus 5. 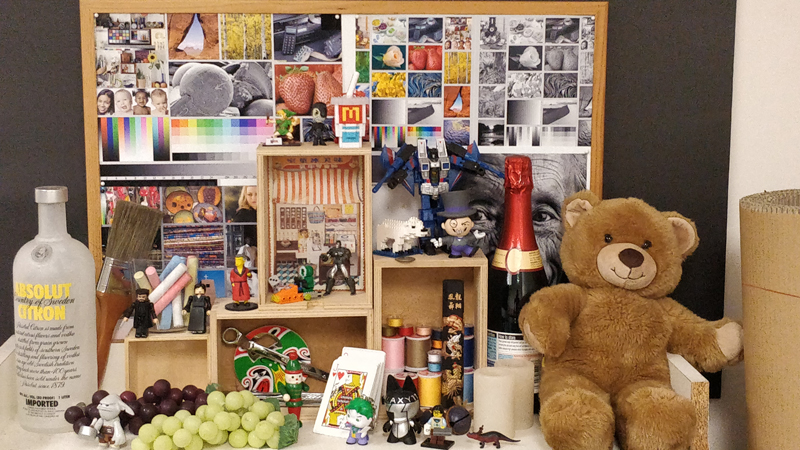 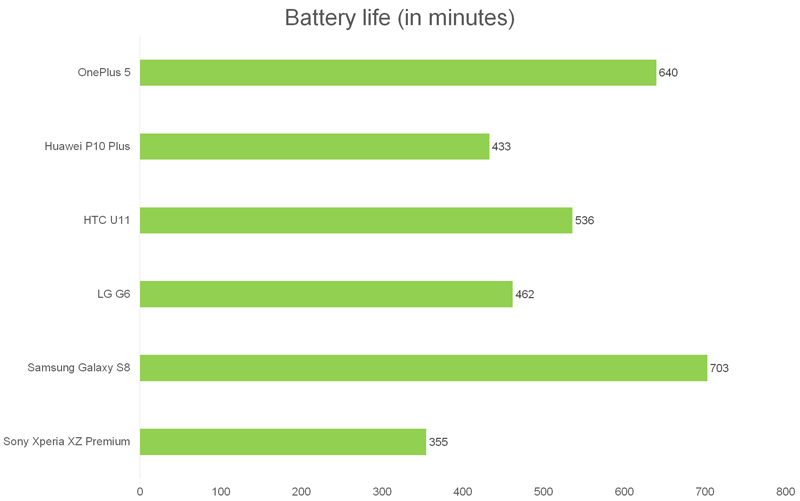 Within the OnePlus 5 comes a 3,300mAh battery capacity with support for quick-charging via its very own Dash Charge technology (5V, 4A). Among all the flagship phones in our benchmark, the OnePlus 5 has the second longest battery life, outclassing all except the Samsung Galaxy S8. This is excellent news since the OnePlus 5 uses a top-end processor. We believe that the battery longevity can be credited to the display – it’s AMOLED, and it’s only Full HD resolution, which is the only device in our comparison with such a configuration and would naturally help its battery benchmarking cause.

If you’re coming from the OnePlus 3T, the reduced 100mAh battery capacity does result in a huge uptime difference, so it’s a choice between a more powerful processor or longer battery life. The OnePlus 5 doesn't seem to be as efficiently optimized as the OnePlus 3T since the disproportionate increase in battery consumption results in far lower battery life; a 3% battery capacity change certainly does not lead to a 30% difference in uptime. 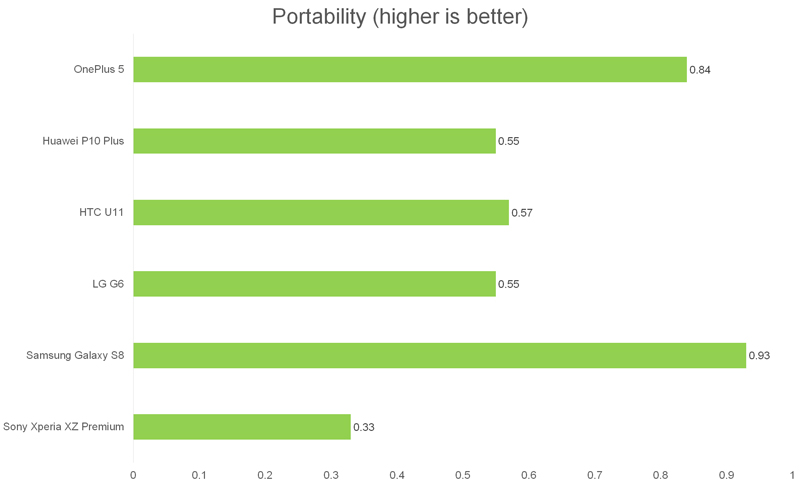 On the other hand, the OnePlus 5 offers a portability ratio (battery life vs. weight x volume) that's second only to the Galaxy S8. It does have its own merits as a flagship competitor, but only if you look at the current year's offerings. 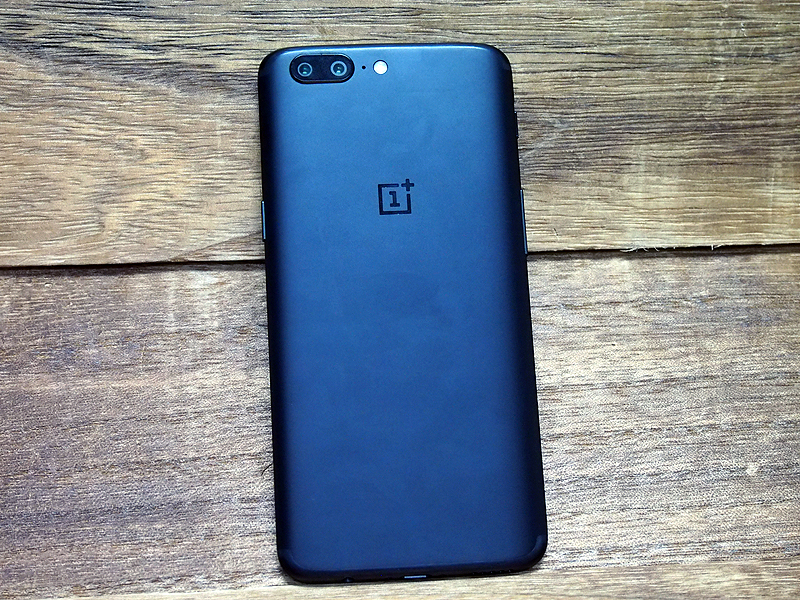 OnePlus 5 almost got everything right – the device comes across as a decent flagship offering in spite of its flaws. It’s sufficient on the hardware front, thanks to its current-gen flagship processor. Other noteworthy features include its flagship-worthy UI, a great looking display (albeit only Full HD res), a battery life that’s second only to the Galaxy S8, up-to-date Bluetooth 5 support, generous RAM (in both storage variants), and swift embedded storage technology. The extra touches help the OnePlus 5 compete with the titans of this tier, but it somewhat misses the mark on other fronts that hurt its overall standing. Mainly, its average imaging performance, lack of microSD card slot, a non-water resistant build, and a downgrade from USB Gen 3.1 to USB 2.0 transfer speed support (when compared to OnePlus 3T) are missing pieces of its puzzle. Even so, at S$869** for the OnePlus 5 (128GB, 8GB RAM variant), it would seem like it's a decent trade off since you are still getting what you pay for – lower-than-flagship price (when compared to the likes of Apple, LG, Samsung and Sony) for fewer perks.

The big concern for OnePlus 5 is the competition it faces in its unique position. By placing itself just shy of a thousand bucks, the S$869** (128GB, 8GB RAM) variant attracts rivals that offer much more for a slightly higher price tag; case in point, the HTC U11. For ~S$130** more, we’re looking at an upgrade in screen resolution, expandable storage, an IP68 water-resistant build, significantly better imaging prowess through a single lens, better audio features, squeeze gesture novelty functions and faster transfer rates on its USB port. Not to mention, it has a unique color offering. While the OnePlus 5 can be a viable alternative to devices far above the S$1,000 baseline by offering fewer things and costing less, it pales in value against its closest rival that looks to offer everything you need for the complete package for just a little more. In some ways, you might even say the OnePlus 5 is the poor man’s version of the HTC U11 if  ~S$130** matters more to you than what you could gain.

At the same time, the lower priced OnePlus 5 edition (64GB, 6GB RAM) at S$768** provides far higher value next to a Huawei P10 (the only other notable flagship device at this price rung). You get an up-to-date processor with better performance, much longer battery life and a 3.5mm audio jack – things that the P10 and P10 Plus do not have. If you’re shopping for a phone below S$800, the 64GB OnePlus 5 offers great value, especially when you consider the processing platform you get along with everything else we've conveyed about the OnePlus 5.

As a whole, the OnePlus 5 seems like a hard sell in a competitive climate, but it’s still a viable alternative to the HTC U11 for the crowd that wants a decent flagship experience that’s priced well below the S$1,000 mark.

Officially, you can pick up the OnePlus 5 via Lazada Singapore from the following URLs (8GB RAM with 128GB ROM, 6GB RAM with 64GB ROM) and support and warranty matters have been covered in our earlier reporting.

**Update (7th September 2017): The OnePlus 5 devices will have a revised price point locally, effective immediately. The new retail prices are S$699 (64GB) and S$799 (128GB) respectively. Below is our revised conclusion after-the-fact.

The drop in price is a welcomed change, but it doesn't modify our assessment of the OnePlus 5 devices (it's also only S$70~ lower than before). The phones' merits and weaknesses stand on its features (or lack thereof). Now that it's S$200 less than the HTC U11, the price cut merely provides a better standing in its aforementioned unique positioning - making it easier to stomach the differences in features with regards to the price tag. The 64GB OnePlus 5 variant is now even more competitive when stacked against the Huawei P10.

According to Lazada Singapore, the price reduction is a permanent decision. To us, it's an exciting development, seeing that the device only officially started retailing through them about a month ago.