OnePlus 10 Pro packs a Qualcomm Snapdragon 8 Gen 1 chipset, putting its performance on par with both budget flagship models (its tier) and premium flagship models above it. Its natural rivals (at least, the ones we’ve tried) are the Samsung Galaxy S22+ (same price range with the same processor) and the Google Pixel 6 Pro (same price with Google’s very own flagship chipset). Other plausible competitors are priced above – like the Oppo Find X5 Pro – which shares an equally competent display and processor but commands a premium price.

OnePlus’ proprietary cooling techniques include a 3D Passive Cooling System that consists of a vapour chamber, copper foil, and copper carbon on both sides of the phone’s motherboard. There’s also a graphene cooling film built into the system. From our test results below, it does seem like its cooling system is allowing the OnePlus 10 Pro to perform at its peak and is able to maintain an edge over others. 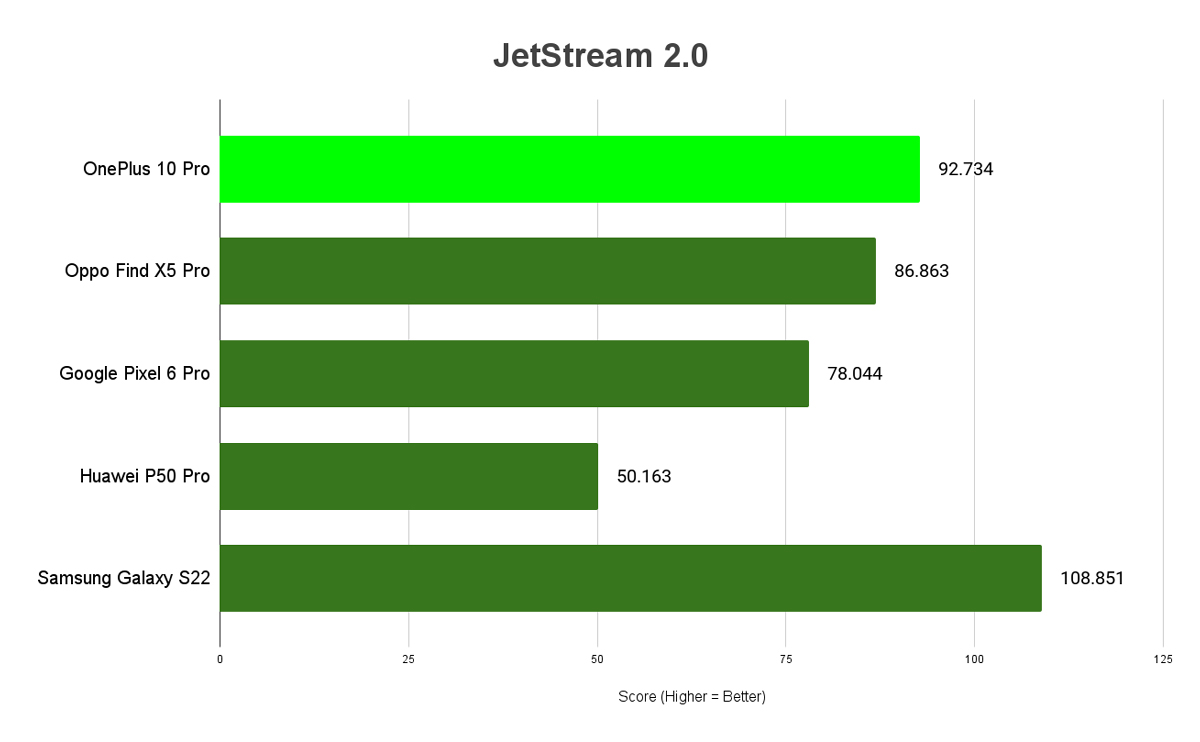 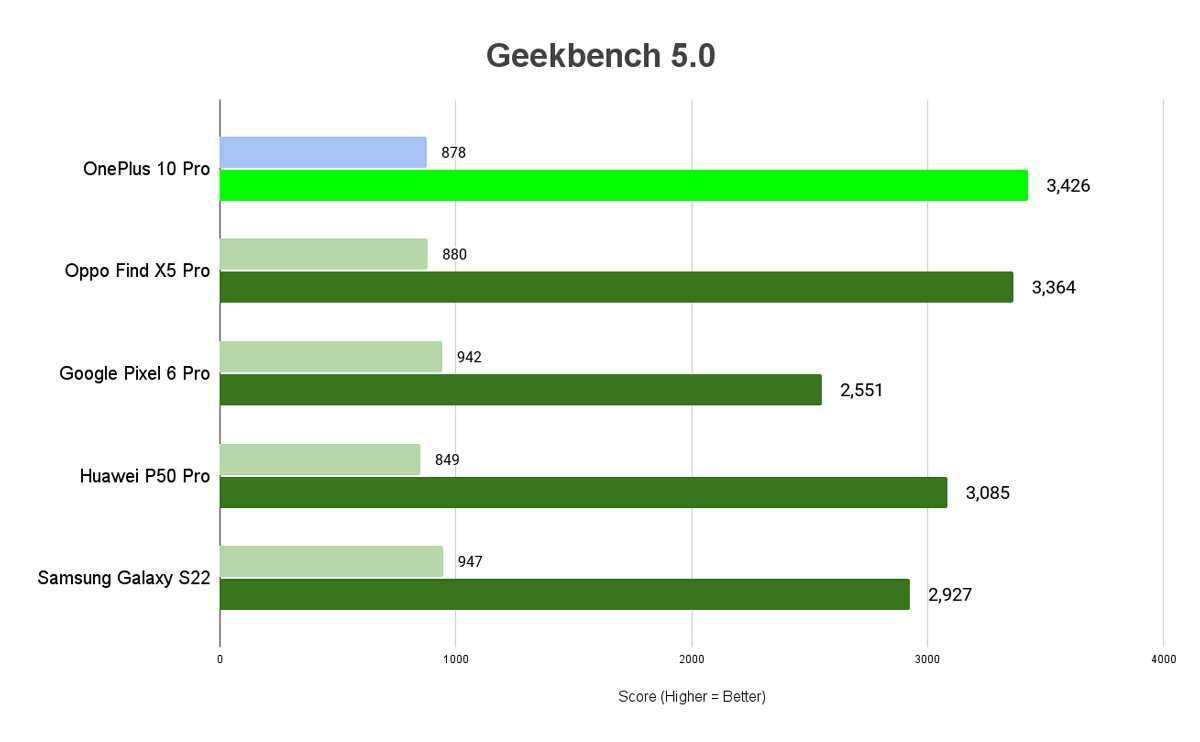 In Unlimited mode, the benchmark runs offscreen unsig a fixed time step between frames. Unlimited mode renders exactly the same frames in every run on every device, regardless of resolution scaling. The higher the score, the better. 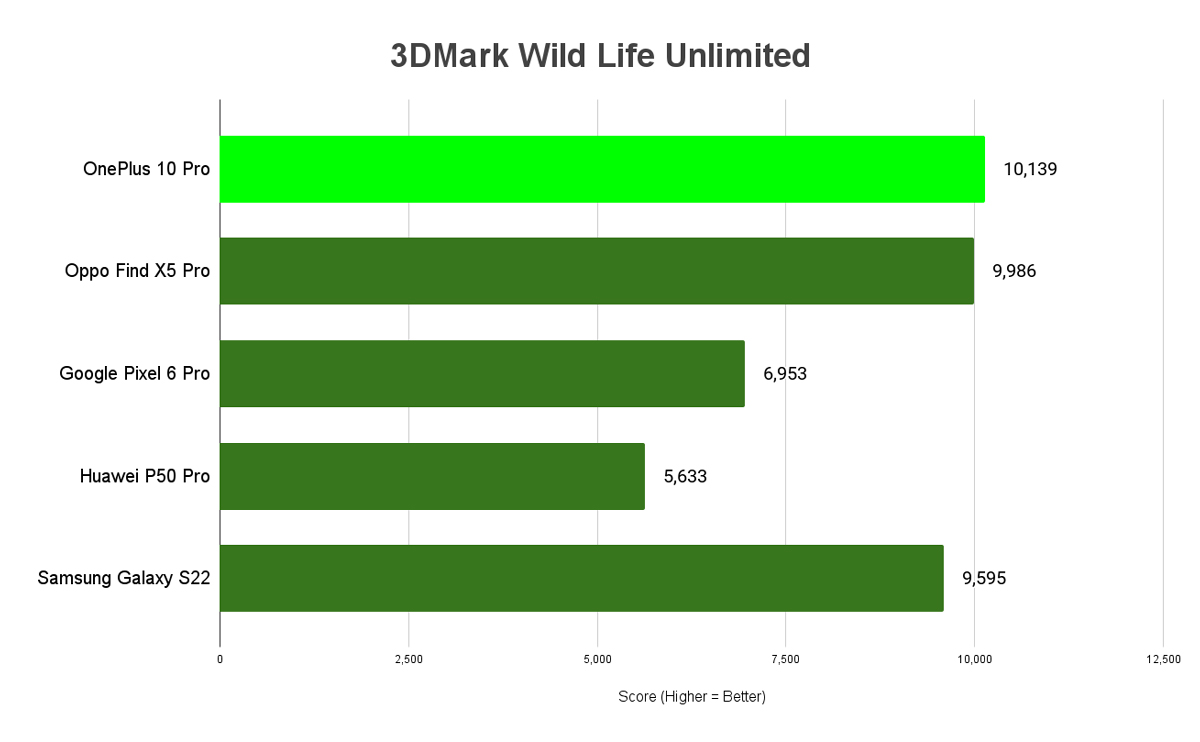 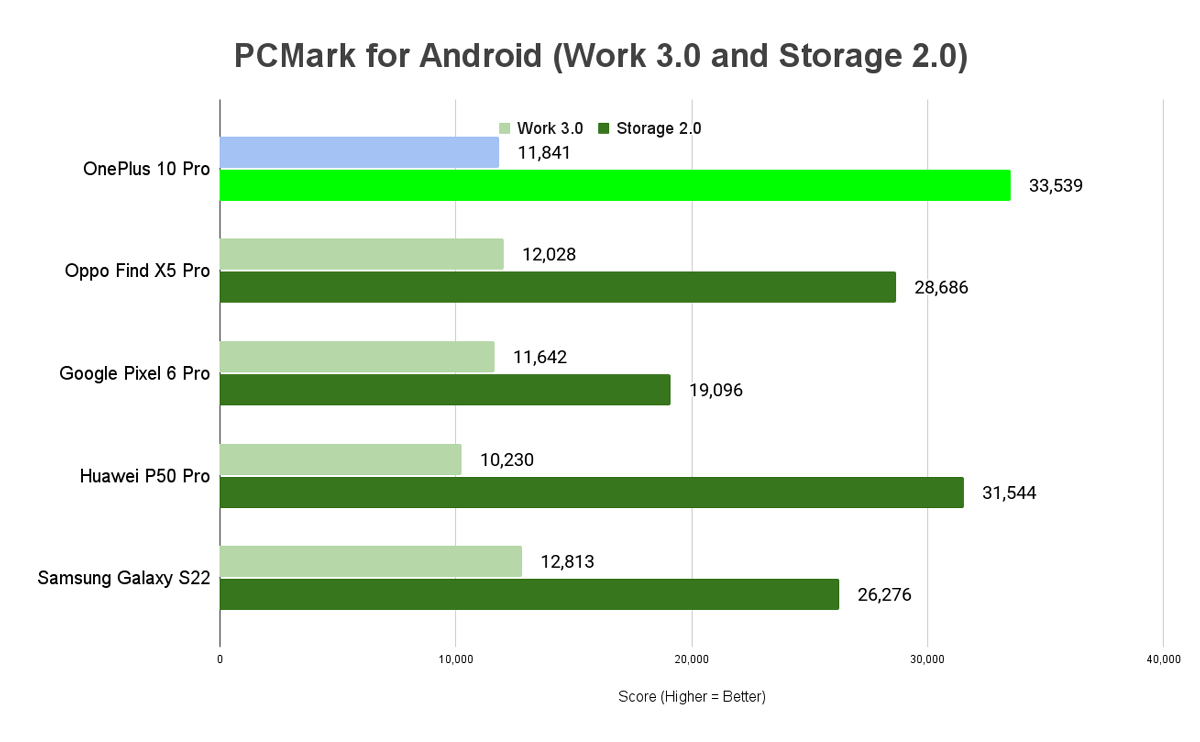 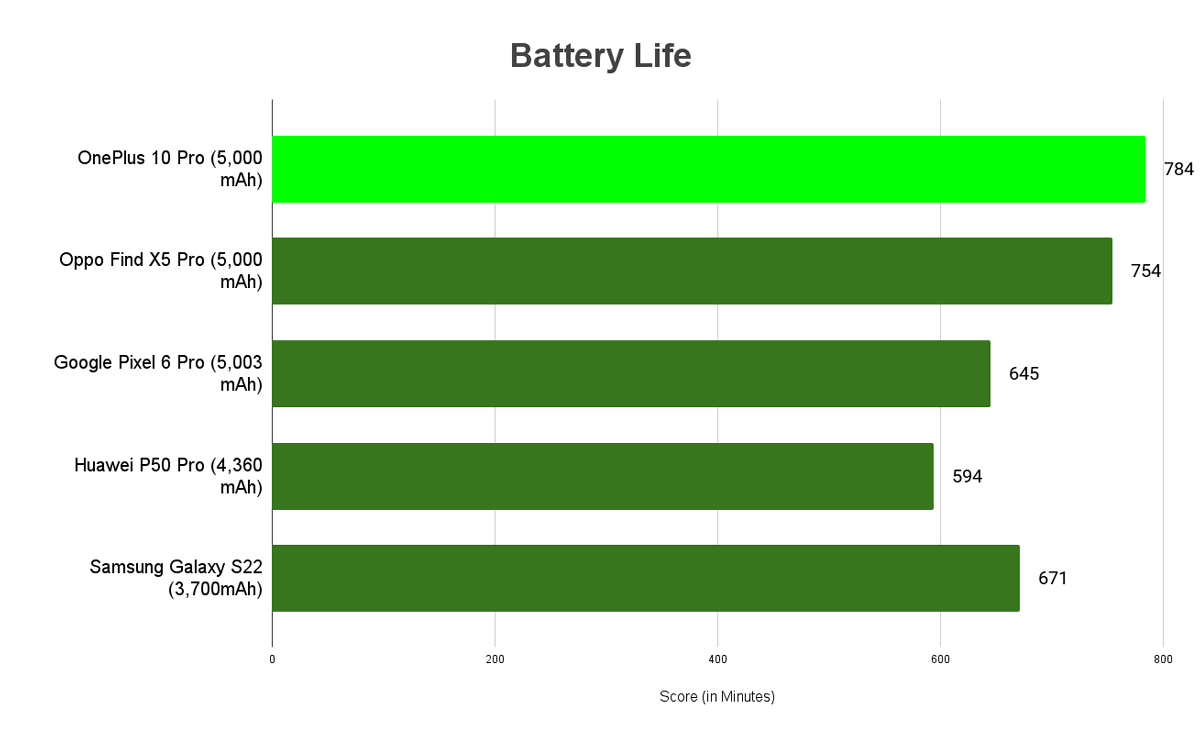 Packing 5,000mAh, the OnePlus 10 Pro was able to deliver 13 hours of continuous uptime. It’s more efficient than many of its competitors, besting more expensive alternatives with the same chipset (Samsung Galaxy S22 Ultra and Oppo Find X5 Pro) and being far more efficient than competitors at the same tier with the same screen size, resolution and capabilities (Google Pixel 6 Pro).

OnePlus said that the 10 Pro is capable of 80W SuperVOOC fast-charging. The included charging adapter in our box is rated at 80W, and was capable of giving us 0% to 50% in 24 minutes and 0% to 100% in 55 minutes. The Oppo Find X5 Pro too boasts an 80W SuperVOOC charging, though we found Oppo to maintain faster charging rates than the OnePlus 10 Pro. Still, it's combination of fast charge times and long battery life means you can leave the phone off the charging cable for most of the day comfortably.

Wireless charging is rated at 50W, which is still plenty quick and it spares your USB-C port from wear and tear. The phone also played nicely with a random third-party wireless charger we found (40W) lying around our testing spot. 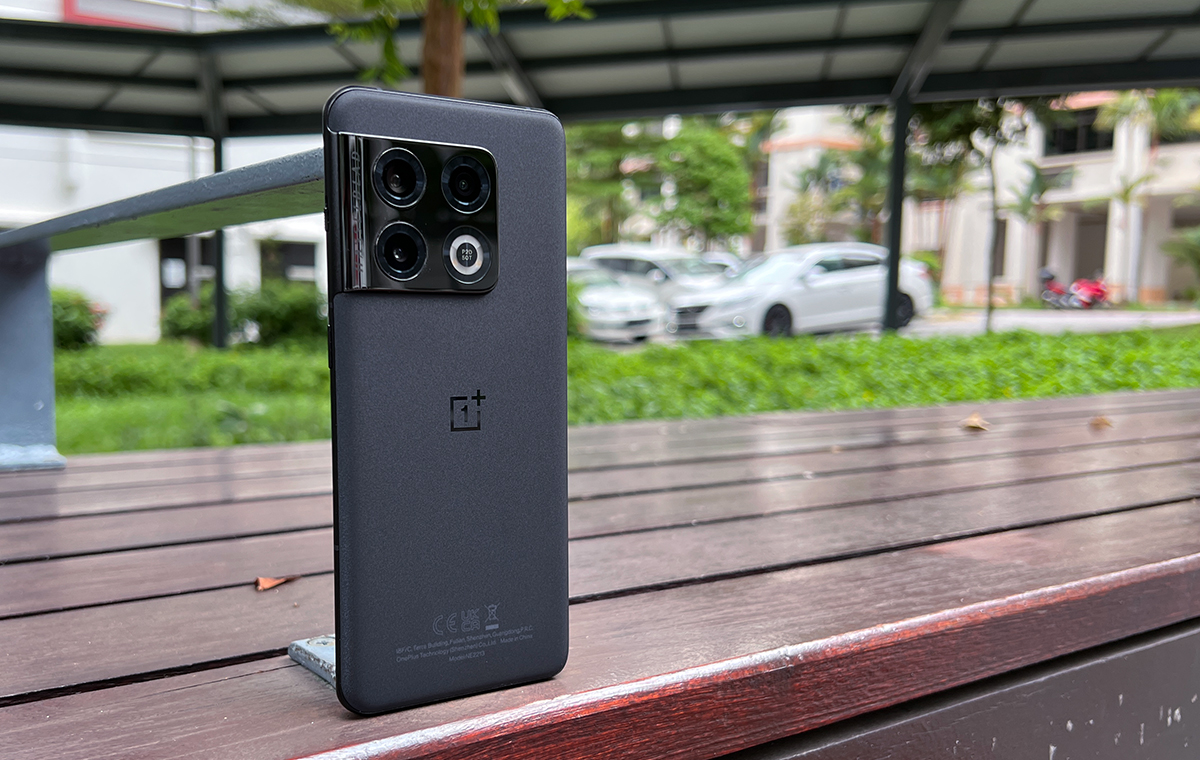 For once, OnePlus finally made a phone with a relatively clean-looking design. OxygenOS is also much more pleasant than before, and choosing it over other Android reskins is a matter of preference now.

You’ll notice that we’ve stopped calling it a flagship killer – and that’s because OnePlus has dropped all pretences and decided to charge S$1,299 for its signature device. Gone are the days where OnePlus offers all the best-in-class parts under a thousand bucks. But, not all is lost. 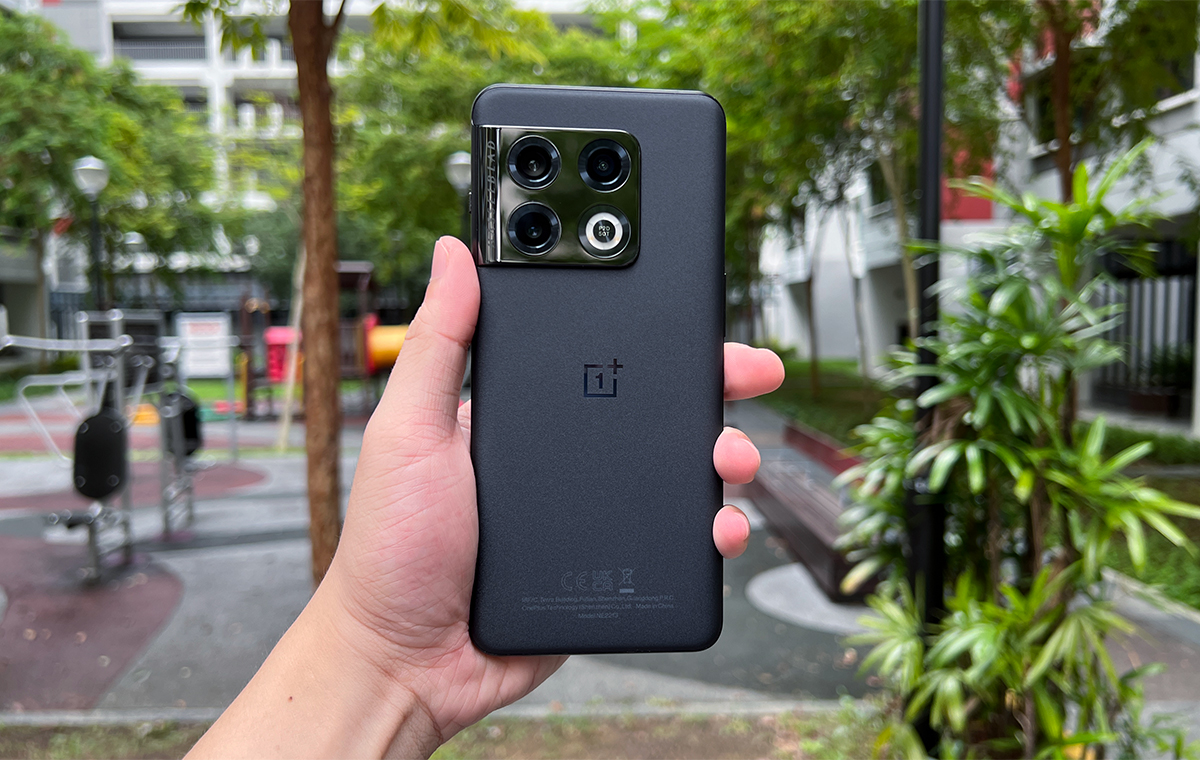 As a flagship smartphone, the OnePlus 10 Pro does quite well for the price it commands. At S$1,299, it’s squarely up against the Google Pixel 6 Pro, the base version of the Samsung Galaxy S22 (or S22+ on a discount), and other recent phone entrants like Xiaomi.

Where it does well is the inclusion of high-end specs across the board. For instance, the Pixel 6 Pro doesn’t packs 256GB of storage nor tout a powerful Snapdragon 8 Gen 1 like how the OnePlus 10 Pro does, while the Galaxy S22 and S22+ do not have QHD+ resolution LTPO AMOLED displays. Specifically, the Galaxy S22+ at the same display size costs a lot more than the OnePlus 10 Pro.

It’s also a class below the premium-tier Oppo Find X5 Pro. Sure, you won’t get the same imaging performance, audio quality, or fingerprint sensor speeds, but it has nearly identical displays, fast-charging wattage, and the same main processor while helping to save S$400 (based on their official listed prices).

The OnePlus 10 Pro stands in as a handset for users who are not willing to compromise on both ends, replete with other perks like getting a full charge in under an hour with 80W fast-charging and IP68 certification against dust and water. 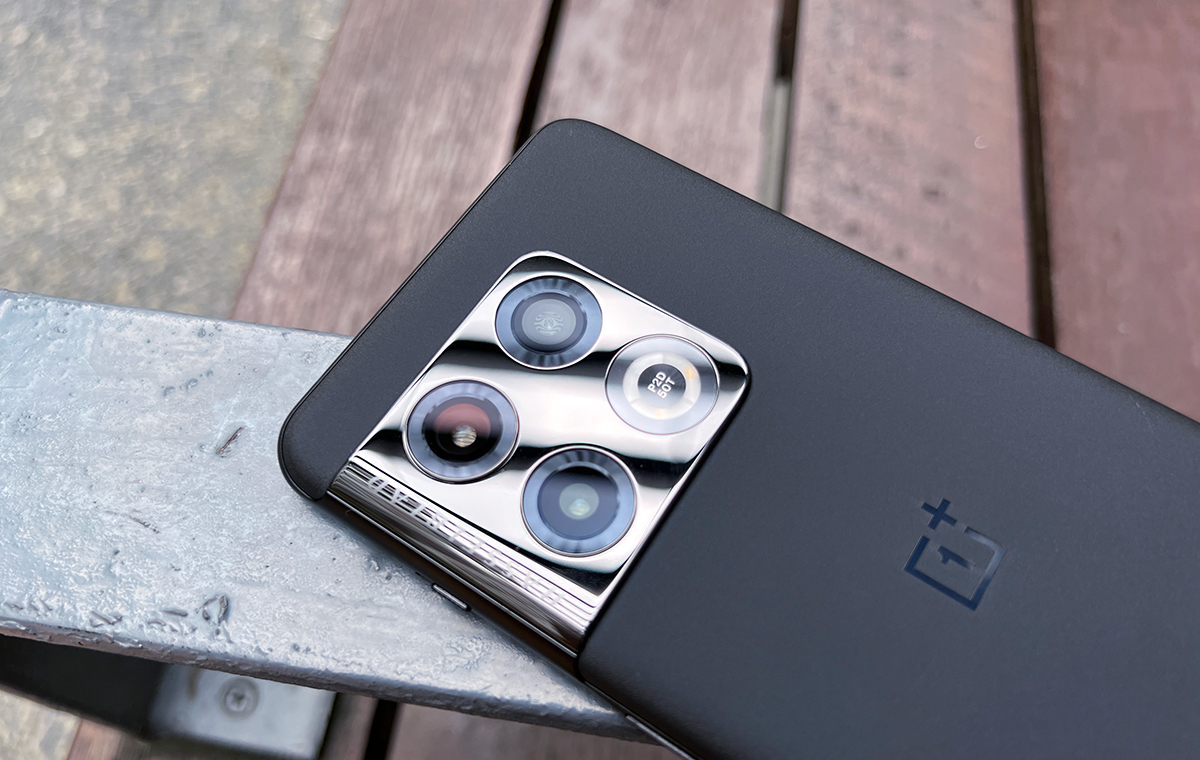 The phone does fall a little short against its closest rivals in important areas like imaging and sound quality. We’d easily pick the Pixel 6 Pro or Galaxy S22/S22+ for nicer images on Auto mode, and both rivals also sound better with their external speakers. Having imaging quality that’s rather average surely hurts the OnePlus 10 Pro more. Could OnePlus have done more at its price point? Certainly, considering it's already using premium parts, building a more durable device is a matter of product design. We've not come across a device in recent times that snaps as easily as the OnePlus 10 Pro, so that's definitely a concern for those who thrust their phones in their pockets. 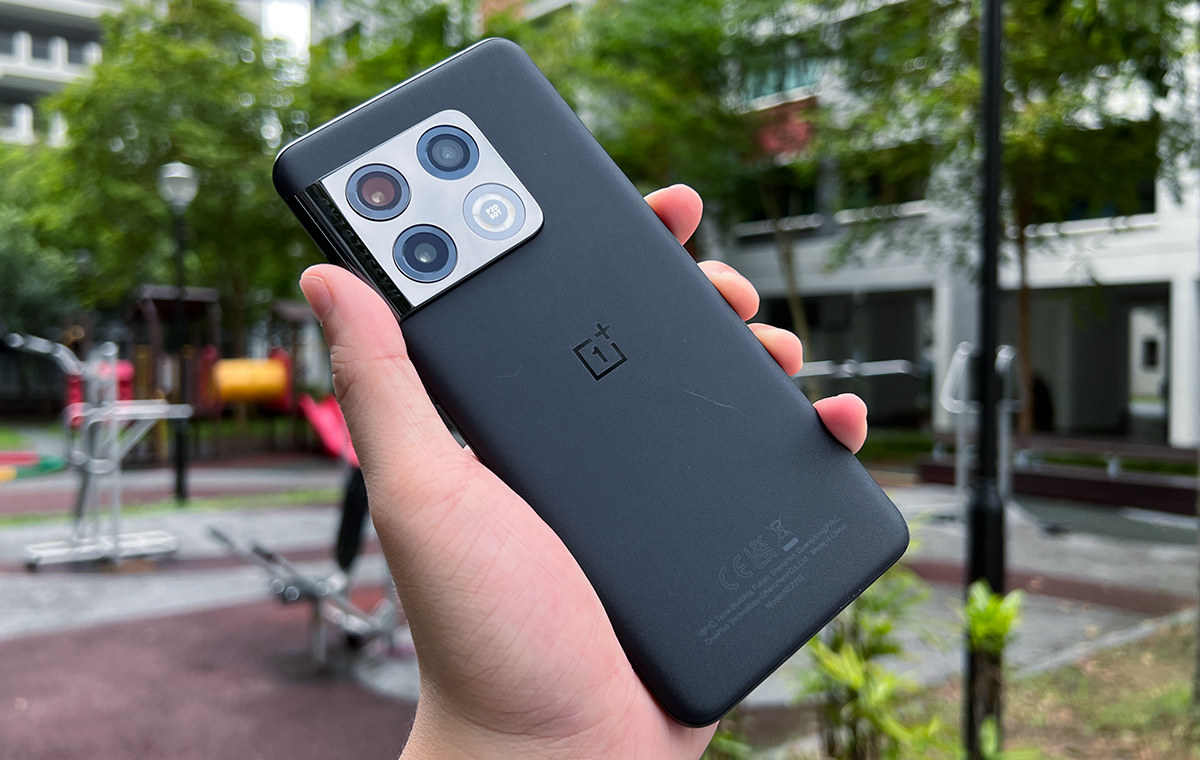 Also, it’s competing against other very attractive alternatives. Immediate rivals that come to mind aren’t just giants like Google and Samsung, but also Xiaomi and its sub-brand Poco, which has a huge following for its similar value-for-money slant. If OnePlus decided to do just one more thing better (the cameras could be one place to start), it might very well be the top choice for phones under S$1,300.

As it stands now, the OnePlus 10 Pro is still a good consideration at its price point if you're keen on getting a phone that feels good in the hand, sports a modern design, has a large 6.7-inch AMOLED display with QHD+ resolution, high refresh rates and HDR processing, plenty of storage (256GB) and RAM (12GB), and runs on Android 12 OS with a Google Play Store. From our testing, it's also got good performance to boot, so it lives up to the typical OnePlus proposition, though not quite as affordable as some of its predecessors were.

The OnePlus 10 Pro is exclusively available at its Lazada online storefront, with an official retail price of S$1,299 (12GB RAM + 256GB storage).

Write a Review
Compare This | Specifications
1440p LTPO AMOLED display for budget flagship
12GB RAM and 256GB storage for its tier
Impressive fast-charging
Excellent battery uptime and test results
Decent UI
No longer the sub-S$1,000 offering it was
Mediocre speakers for audio
Average imaging quality and tuning
Structural design is questionable
Our articles may contain affiliate links. If you buy through these links, we may earn a small commission.
Sponsored Links