While there’s a market for higher-spec'd digital compact compacts such as the Canon PowerShot S100 and the Panasonic Lumix DMC-LX7, most of the rest are still run-of-the-mill models that still try to differentiate based on their megapixel count. And it's perhaps safe to assume that not many of these can withstand the challenge of the outdoors. A rugged digital compact caters to the more adventurous shutterbugs, and is definitely the camera of choice if you’re heading off the beaten track.

Traditionally a niche market, this segment looks to be expanding as almost every major digital compact camera manufacturer today has a rugged model in their lineup. Olympus has long been known as a forerunner in the rugged compact camera market, and the Tough TG-1 is the company's latest rugged camera that was recently launched in May.

On paper, the TG-1 sports some impressive specs. Besides its 2m shock-proof, crush-proof to withstand 100kg, 12m water-proof, and -10°C freeze-proof specifications, this 12-megapixel, backlit CMOS sensor-equipped camera packs a 4x optical zoom lens (25-100mm in 35mm equivalent). Mind you, this lens has a maximum aperture of F2.0, the widest yet in an Olympus Tough camera. At the maximum zoom range, the widest aperture it can achieve is F4.9. The camera is also capable of recording full HD 1080p video, and has an ISO range that tops out at ISO 6400.

But that's not all to the TG-1. It also comes with the same TruePic VI processor found in the superb OM-D E-M5, and a high-resolution 610K-dot 3.0-inch OLED display that boosts scratch- and water-resistant coatings. For fast action capture, the TG-1 can shoot up to 1/2000 of a second, and up to 5 frames per second (fps) at its full 12MP resolution. At a lowered 3MP resolution, it's able to hit a rate of 60fps.

So, do we finally have a rugged camera without all the performance sacrifices common in such cameras in the TG-1? Read on to find out.

While the TG-1 still falls under the compact cameras category, due to its rugged and tough design, it's naturally bulkier than the average compact. If you're concerned about the weight, Olympus has done a good job of keeping it relatively light at 230g. However, its nearly 3cm thickness means that you'd be hard-pressed trying to slip it into a regular jeans or pants back pocket.

Most rugged cameras have their lens located at the top corner of the camera, but the TG-1 opts for a more conventional location in the middle of the camera body. This actually is advantageous as it reduces the chances of accidental 'finger photography' in the pictures you take. Another thing we like about the TG-1 is that it supports a conversion adapter which lets you mount a waterproof teleconverter or fisheye converter lens, as well as commercially available 40.5mm lens filters. These make the TG-1 a more versatile camera than its rugged peers.

We also noted that many rugged cameras conveniently leave out the mode dial in their design, but thankfully, the TG-1 has opted to retain the mode dial. However, it's not located where you would normally expect it to be. While the mode dial is commonly found on the top plate for the average point-and-shoot compacts, the mode dial on the TG-1 is found on its rear. This means the top of the camera plays host only to the the power button, shutter release and the GPS module. This design choice meant that the buttons on the rear have to be made smaller to accommodate the mode dial. This might be a problem if you are going to handle the TG-1 with gloves, something which is absolutely foreseeable if you are going diving or skiing. Zooming in and out on a subject is accomplished with a zoom rocker that’s found on the back of the camera. 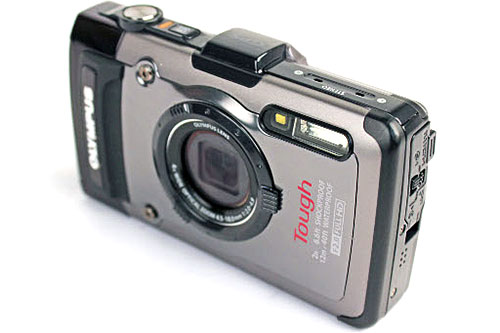 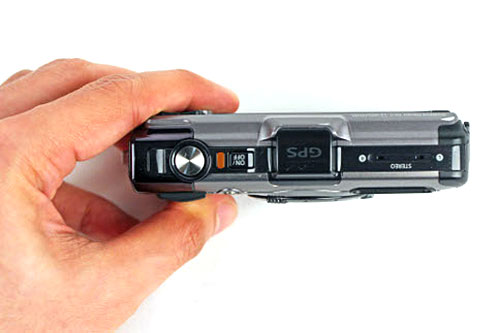 While the rest of the rugged cameras have LCD screens, Olympus has decided to go with a high-resolution 610K-dot OLED screen for the TG-1. The result is a display with bright colors and wide viewing angles, and it doesn’t look as washed out as other displays under bright sunlight.

Due to the addition of the mode dial, navigation is actually easier than most of the other rugged compacts we have handled. While the others required accessing the menu system in order to change shooting modes, on the TG-1, a turn of the mode dial accomplishes this. During normal shooting, there’s a vertical list of commonly-used settings on the right of the screen, so you do not need to access further sub-menus. We like this navigation layout, and find it very useful for adjusting exposure compensation, white balance, and ISO settings quickly. Unfortunately, GPS settings are buried deeper in the menu system. This is an issue because the GPS receiver will continue to track your location even after you power down the camera, unless you have it turned off when you power down the camera. 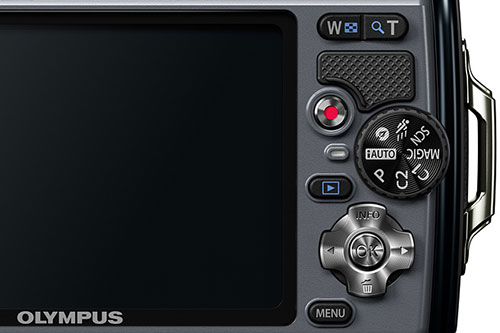 As mentioned earlier, the TG-1 is constructed to hold up in some of the harshest operating conditions. While we didn't bring it to the North Pole, we did bring the TG-1 down to a swimming pool. It survived being dunked underwater for an hour, and was still firing away long after we left the pool.

The next biggest draw of the TG-1 (besides its toughness) is its fast lens. Capable of shooting at a maximum aperture of F2.0, this is by far the only rugged digital compact that's able to shoot at any aperture below F3.3. So what does this mean for TG-1 users? The wide aperture allows for more light to enter the lens, which results in better low light performance compared other rugged cameras. This also helps when it comes to underwater shooting, as we all know that light tends to be pretty scarce the deeper you head underwater.

Sadly, the lack of a manual or an aperture-priority mode prevents one from using the F2.0 lens to its fullest, as the camera is the one that decides when to shoot at F2.0. And let's not forget this is a variable aperture zoom lens. In other words, this F2.0 aperture is only available at the widest end; any zooming in and the camera will shoot at other aperture values. However, it must be noted that the lack of manual modes is very common in rugged cameras.

While there’s no full manual, or aperture- and shutter-priority modes, the TG-1 does have 25 scene modes, in addition to the usual iAuto and Program modes. The scene presets inlcude the likes of Portrait, Sunset, Underwater Snapshot, Pet, and Backlight HDR, among many others. There is also a whole host of filters (12 to be exact), including crowd favorites like Pop Art, Miniature, and Soft Focus, and new ones like Dramatic and Fragmented. Spot metering and spot AF are also present. Naturally, the TG-1 supports face detection (up to eight faces). To ensure that photos aren't ruined due to camera shake, the camera uses sensor-shift image stabilization. A Multi-Motion Movie IS feature also helps to reduce the effects of camera shake when you're shooting a video while walking.

The TG-1 comes with a built-in GPS antenna so users can geo-tag their photos, which is pretty handy if you intend to do a lot of hiking or exploring of the great outdoors. Just remember to turn off the GPS if you don’t intend to use it, as it can drain the battery rather quickly. 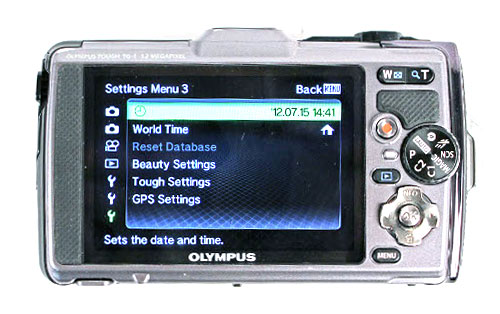