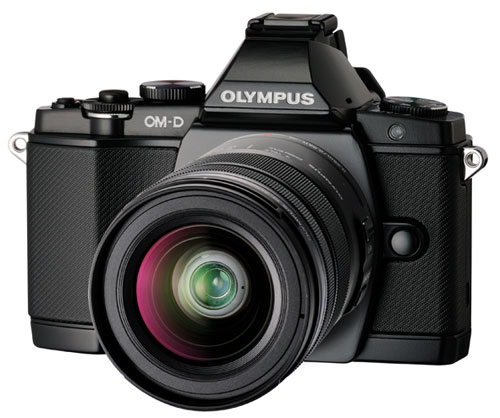 There's just something about the Olympus OM-D E-M5.

We could list its specs: 16MP image sensor, 5-axis image stabilization, weather-resistant body. We could tell you how well the camera handles with the twin control dials, quick AF speed and easy AF point selection. We could wax lyrical about its gorgeous, retro-inspired look. We could look at its images' beautiful colors and remarkable high ISO performance.

But it's when these elements are brought together that something altogether new is born: Charm. Any photographer would be hard-pressed not to have fun shooting with the E-M5. The mostly well-placed controls let you give it swift commands which are promptly obeyed. Its quick and accurate auto-focus, together with the excellent image stabilization and image quality at higher ISO speeds, conspire to help you catch the most fleeting of moments.

The E-M5 is not perfect, of course. The d-pad is cramped, the Play and Function 1 buttons are impossibly small and the camera strap lugs are placed in the most obstructive way possible. Even though ISO settings can go up to previously unseen levels with little noise showing, we would have also liked to see clearer results at lower ISO ranges around ISO800. But the camera is also light, compact, responsive, easy to use and delivers very good images. In the end, this is a capable camera you can trust, and that makes all the difference.

The Olympus OM-D E-M5 vs. the World

We think that a S$400 difference between two models is reasonable, especially when one model offers much more than the other. But at near S$2000, the E-M5 is in the same pricing ballpark as the Sony NEX-7, selling for S$1999 with a 18-55mm kit lens. The Sony NEX-7 is also a high-performing, feature-rich camera, packing a bigger 24MP APS-C sensor with a maximum shooting speed of 10fps. Its Tri-Navi control system also offers quick and intuitive ease of use - it's definitely no slouch when compared to the E-M5.

The one definitive edge the E-M5 offers against the NEX-7 is the system; Micro Four Thirds offers the richest selection of native and third-party lenses for a mirrorless system today, while the NEX system is still in much need of native lenses. Sony has an A-mount adapter, which will let you mount existing A-mount DSLR lenses onto the NEX cameras and retain auto-focus and auto-metering, but the adapter is huge.

The E-M5 is also nearly the same price as the Canon 60D (S$2049 with 18-135mm kit lens) and Nikon D7000 (S$2149 with 18-105mm kit lens) DSLR cameras. To be fair, neither are mirrorless system cameras, but with their larger APS-C sensors and more comfortable controls, they offer a great shooting experience without compromise - except for size and weight. And that's entirely the point of mirrorless system cameras, if you want the best in performance, get a DSLR camera, but by doing so you trade portability and comfort for power. If you want something that's good enough and yet still portable, get a mirrorless system camera.