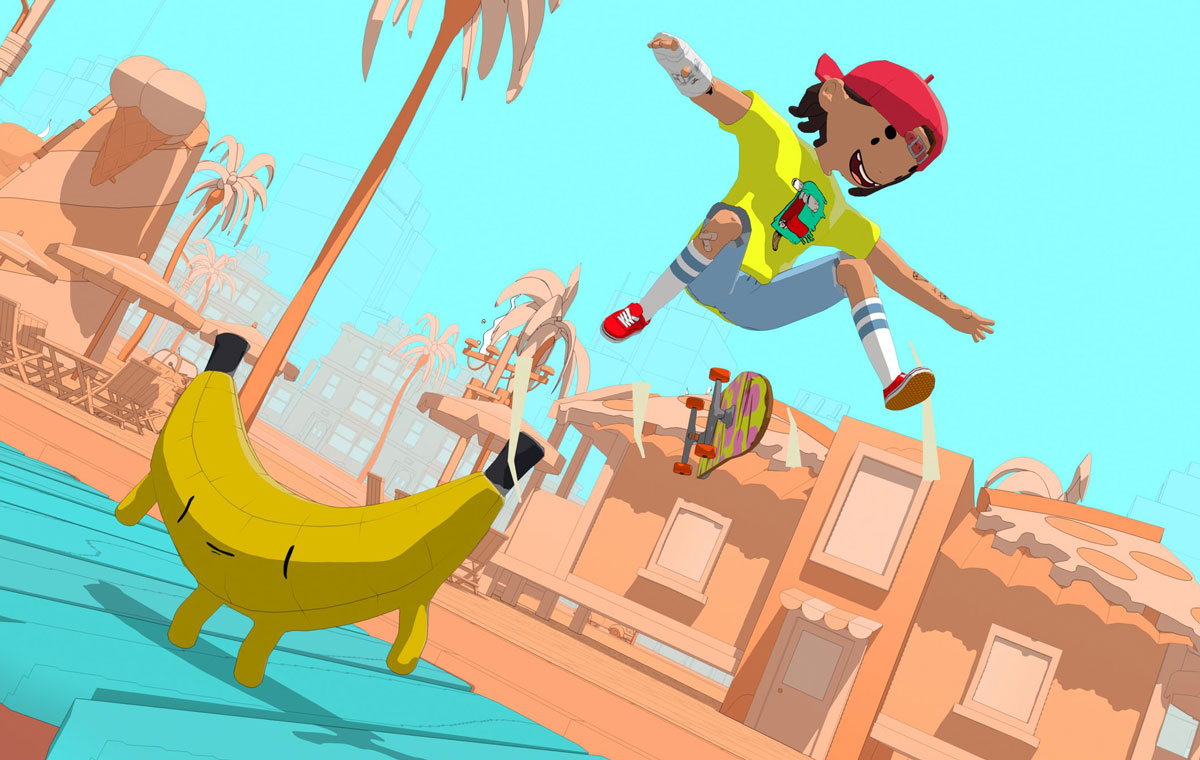 The Animal Crossing of skateboarding games.

OlliOlli World marks the third entry in the OlliOlli skateboarding series, revamping the series with gorgeous 3D hand-drawn visuals compared to the retro pixel art of its predecessors. Playing this game is like having a warm slice of apple pie with a scoop of vanilla ice cream - total comfort food. Developer Roll7 opts against a focus on competitive gameplay here, to give players a casual skateboarding game that focuses on pulling off tricks in the flashiest ways possible and having a good time doing it. Previous OlliOlli games featured 2D pixel art and while I certainly love good pixel art, OlliOlli World instantly feels like a massive step up. Right off the bat, you’re treated to a rainbow of visuals in its character creation screen. Much like Animal Crossing, you can tinker with how your character looks at any point in the game, but that didn’t stop me from spending an ungodly amount of time navigating these screens. Since the art style shares some similarities with Adventure Time - namely, the thin mouths and eyes - I tried my best to create Marceline the vampire. I failed. It was still a ton of fun!

There are a ton of options to fiddle with here, which is great, because customisation makes up for the bulk of your rewards for completing levels later on. You can dress your character up in a variety of shirts, dresses, shoes, glasses, hairstyles and so on. Pretty much every option is aesthetically appealing in a way Triple-A games rarely achieve (I’m looking at you, Ghost Recon: Breakpoint), though this is largely due to the simple appeal of its cartoonish art style. The only bone I have to pick here is that it was difficult to find basic customisation options in these menus, like switching skin colours and genders. Once you’re done picking a character, you enter Radlandia - a rad land full of skateboard enthusiasts. Your character bumps into a small group of friends who decide to teach you the basics of the skateboarding world, and so begins a lengthy tutorial section. Characters speak in a Simlish-like series of unintelligible mumbling sounds, and while there are some dialogue choices, they usually boil down to agreeing with a question or cutting a conversation short. Your new friends seem nice, but they aren’t exactly interesting. The story unfolds in short cutscenes before each level, where the group talks to the player before sending them off.

I have to say, my thumb hovered over the ‘skip cutscene’ button during most of these scenes. The story never tries to do anything more than give you reasons to skateboard in different places and in different ways, and I had a hard time investing in this group of one-dimensional cartoons. This didn’t impact my enjoyment of the game too much, thankfully, because OlliOlli World doesn’t really want to be taken seriously. It knows what it is: a good skateboarding game with some fluff on the side. The story might bore you, but OlliOlli World’s real strengths lie where they need to be anyway. Throughout the campaign, you’ll visit multiple biomes in your quest to become the best skateboarder Radlandia and its mythical skateboarding gods have ever seen. The game doesn’t put its best foot forward unfortunately, as its first biome is essentially just an overlong series of tutorials. Tutorials are the worst part of any game - that much is undeniable. Much like any game night, you end up having to endure a hideous amount of rule-explaining before things actually get fun. They are a painful necessity. Knowing this, most games try to bring players into the action as quickly as possible while trimming down tutorials to the bare essentials.

OlliOlli World goes in the opposite direction. Each biome in the game consists of several levels, and in the first biome, each level teaches you one trick. This means the player is forced to endure repetitive levels with ‘do x trick five times’ objectives before they can actually get to the game's meat and potatoes. OlliOlli World is a deceptively cute game with a high skill ceiling. There are a ton of tricks and techniques to master, so I understand why this information was doled out to players slowly, but I still wish the game had opted for less tutorial levels with more content, instead of putting us through a ton of levels that seem stretched thin.

Once you get through those tutorial levels however, this game really gets its hooks into you. Executing tricks is deceptively simple - you just mash the X button to speed up and hold down the analog sticks in different directions to pull off different tricks. Later on, things get more complicated. You learn how to grind on rails, and chain grinding combos together using nothing but your thumbs and pitch-perfect timing. You learn how to jump off a cliff and skate off a billboard, throwing physics out the window entirely. As you progress, these techniques are chained together in interesting ways, making for frantically-paced gameplay where you’re mashing buttons and holding down triggers to rack up points. It’s a lot of fun, in other words. OlliOlli World’s levels are visual eye candy and fantastically designed, populated with little areas of respite from the chaos of chaining together techniques and flipping off rails and billboards. These tracks often diverge as well, giving you multiple paths to pursue in a level where more difficult tricks lie on the way to the finish line. Pulling off harder tricks in a shorter amount of time spells more points in the long run, and it also gives you a reason to revisit older levels or try something different if you failed this one.

If you get bored of the main campaign, the game also offers free run levels with random obstacles, where you can skate for as long as your skills hold up. It’s skateboarding heaven, and given how much fun it is to grind, flip and wallride in this game, you can bet your penny board that I took full advantage of it. Completing each level also gives you items to customise your character - whether it be T-shirts or tattoos - adding onto the already immense volume of options available in the character customisation screen. I love that stuff, but if you don’t care about what your character looks like, these rewards might not enthuse you enough to keep playing. OlliOlli World is comfort food for skateboarding enthusiasts. You won’t find the attention to detail present in classic Tony Hawk games, but that takes nothing away from the game’s addictive gameplay loop of chaining together flashy trick combos against beautiful hand-drawn backdrops. While it’s slow going at the beginning with overlong tutorials and uninteresting characters, the game’s impressive level design and fantastic character customisation system is more than enough for players to sink their teeth into.

Write a Review
Compare This | Specifications
Very pretty hand-drawn art
Tricks take practice, but are satisfying to chain together
Multiple paths and great checkpoints
GREAT character customisation
Great music
Great sound design
Story and characters are boring
Tutorial world lasts way too long and is poorly paced
Our articles may contain affiliate links. If you buy through these links, we may earn a small commission.
Sponsored Links