NZXT Noctis 450: A mid-tower casing with style and bling 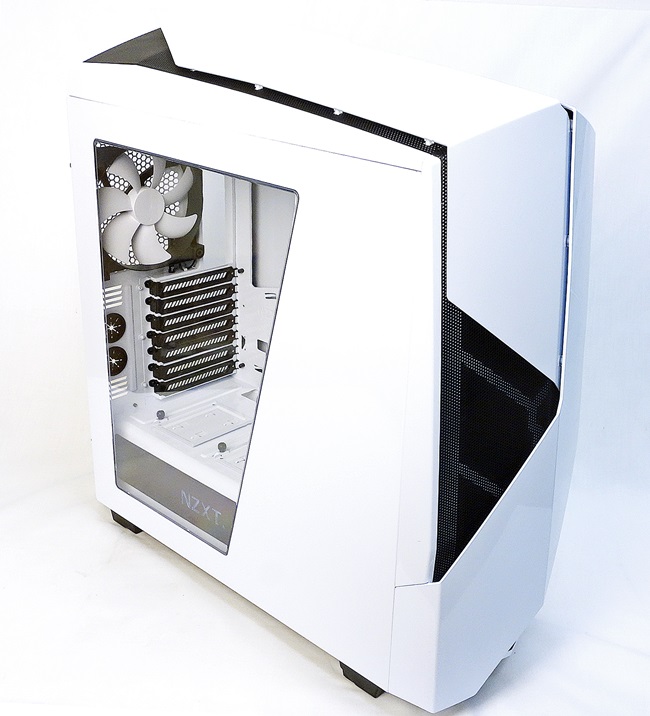 The Noctis 450 is a new mid-tower gaming chassis from NZXT. Parked under its NZXT Concepts branding, the casing is actually an improved version of the Razer-designed H440. The Noctis 450 has a focus on cooling with the incorporation of a pulse wave modulation fan hub and its generous amount of air vents. This allows for a centralized manner of controlling cooling fans. In addition, there’s a generous amount of metal mesh at the front and top of its panels for air intake. The chassis also supports air and liquid cooling systems.

In order to get some street creds, the Noctis 450 comes with a built-in lighting system that is both decorative and functional. To give more leeway in aesthetics to system builders, the Noctis 450 comes in two colors; white and black. Our review unit was the white Noctis 450. The white paint on the metal panels felt like it had been doubled-coated, and on whole, the entire chassis looked clean and pristine! From the color variants to newly incorporated features, we take a closer look at the Noctis 450 to see what sets it apart from the H440 and the competition. 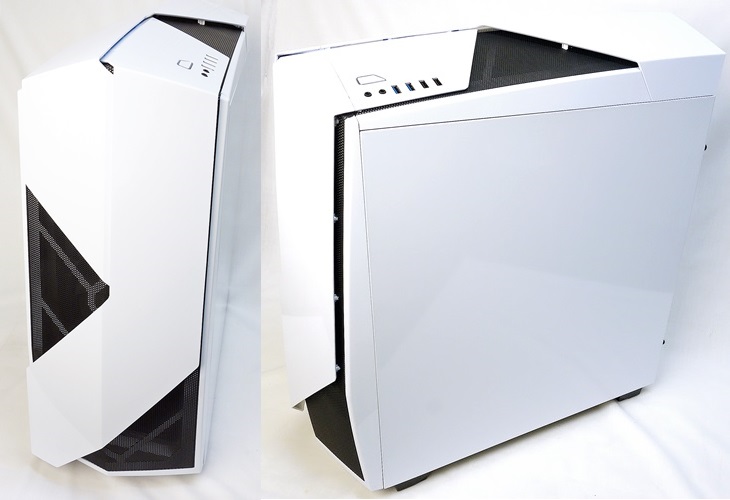 According to its promotional literature, the Noctis 450 features “floating ventilation panels”, which are raised plastic panels over the front and top cover panels of the chassis. With their bevelled surfaces, the raised panels appear as though they are interlocked, like an intricate origami pattern. You would have to take a minute or two to let its design details sink in. From the front of the chassis, the raised plastic panels give the illusion of a white taper that extends from the bottom of the case, over its top, and to its rear. Its white facade is broken by sections of exposed black metal mesh of the chassis.

One of the side panels has a clear acrylic window to let the system builder show off his components. At the same time, NZXT wants to exhibit its blue LED-lit NZXT logo. Speaking of LEDs, the chassis comes with a rear I/O light, as well as ground effects lighting. We will elaborate on the lighting effects later in the article. 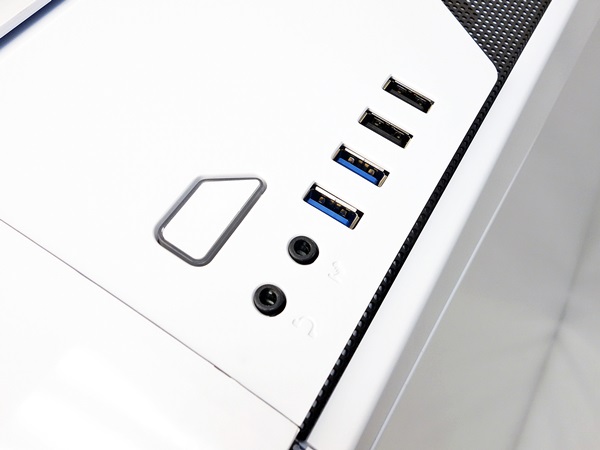 The front I/O panel is located at the one of the angled sides of the top panel. There are a pair of USB 3.0 ports, and another pair of USB 2.0 ones. The power button is set flushed against the top panel, but the reset button is absent. There's also the standard audio output and mic input ports. 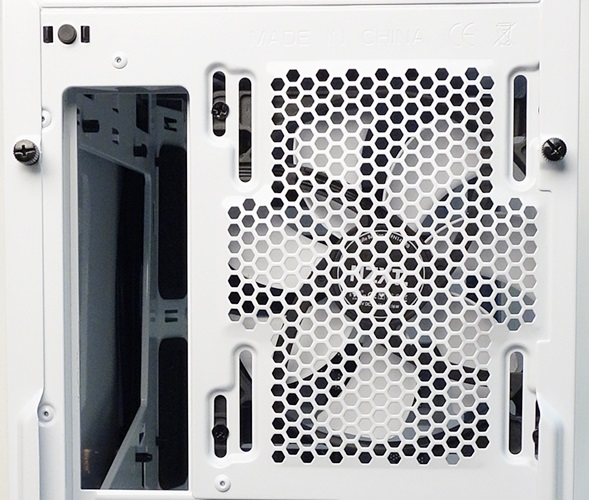 To the rear of the chassis, we see the bundled, 140mm outlet cooling fan with its distinctive white blades. Incidentally, all the bundled fans are from the FN V2 series, which was launched in January last year. Like the Cooler Master MasterCase 5, the rear fan has mounting grooves so that you can adjust the position of the fan. A 120mm cooling fan will also fit. The LED control button is located at the top right hand corner.

At the mid rear section of casing, you'll find a total of seven expansion slots and next to them are a pair of rubber grommets for mounting external cooling radiators. At the bottom, there’s a bracket for mounting a power supply unit and the procedure is just about the same as the Cooler Master MasterCase 5 that we reviewed recently.

Tipping the chassis on its side, we see the removable dust filter for the bottom air vents - specifically to facilitate airflow from the PSU. The area in front of the air vents is actually for mounting a 2.5-/3.5-inch drive. There are four raise rubber stands, and notice the black rails that connecting each pair? They are actually the housing for the bottom LED mounts that provide 'ground lighting effects'. 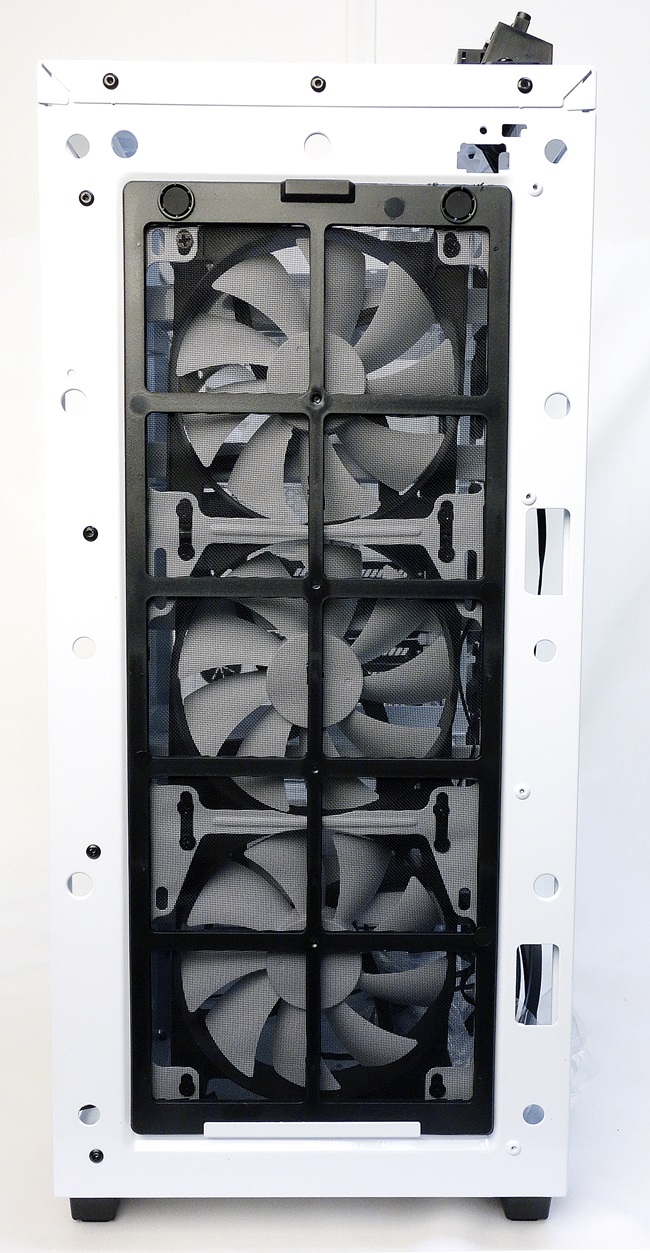 As usual, we remove all the panels to take a closer look at the interior of the NZXT Noctis 450. There’s a particular sequence to remove the panels for the front and top ones; it’s only after the front panel has been removed that we can proceed to remove the top panel. There’s a removable dust filter located in front of the three 120mm intake cooling fans. You can also swop out the triplets for a pair of 140mm cooling fans. 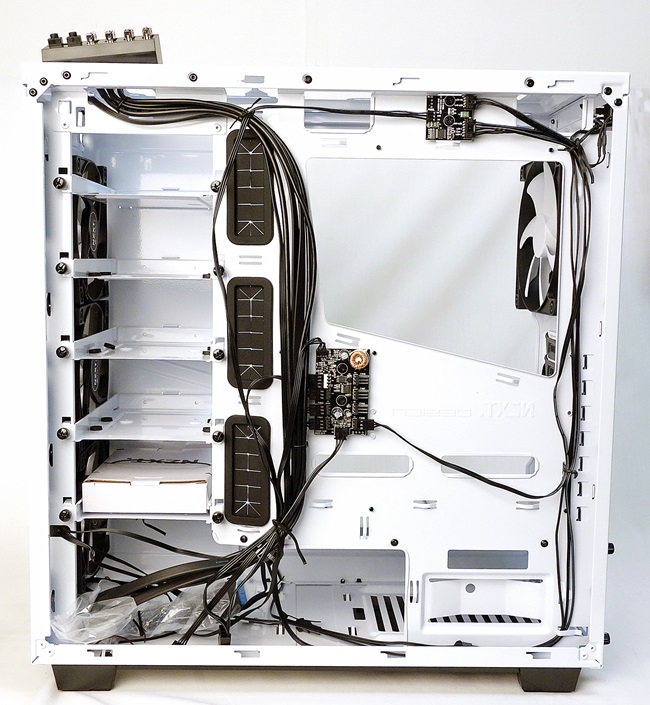 Moving to the side of the chassis, we see four HDD mounting trays. The orientation of the trays are a departure from the norm as they are facing the opposite side. In most chassis, storage drives are mounted on the same side as the motherboard. For the Noctis 450, it’s just the opposite. Also, this side of the chassis appears "busier" due to the wires from its PWM fan hub and LED control PCB. More on these features later. 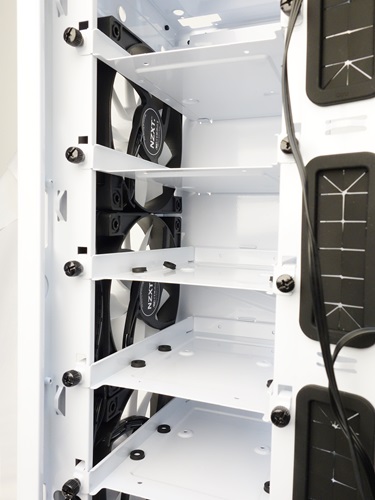 A closer look at the mounting tray reveals that each supports a 2.5- or 3.5-inch HDD. According to the specifications of the chassis, it is able to accommodate radiators of liquid cooling systems of the following dimensions; 240-, 280-, and 360mm. However, in order to swop out the bundled triplet of 120mm front intake fans, the HDD mounting trays have to be removed, and then replaced after the installation of the new cooling system. That's a bit tedious, but thankfully, a one-time affair for most users. 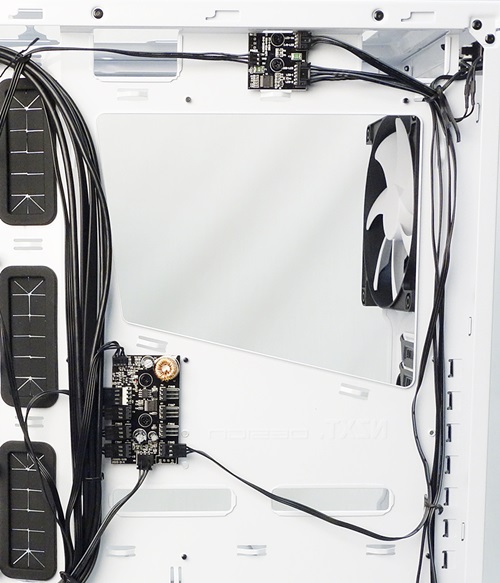 We also see a large cut-out for customized CPU coolers at the motherboard mount area. There aren’t any options to mount HDDs here but we do see two control hubs over here; the PWM fan control hub is located below the cut-out at the motherboard mount area. The new fan hub converts a single PWM signal from your motherboard's CPU fan header to a voltage signal for the 3-pin cooling fans. This is an improvement over the fan hub on the H440, which forced all the 3-pin fans connected to it to run at full speed at all times. According to the manual, the fan hub can support up to 8 cooling fans from the single, 12V 4pin power input from the CPU fan header. The LED control hub is near the top of the cut-out. Next, we move over to the side where the motherboard will be mounted. 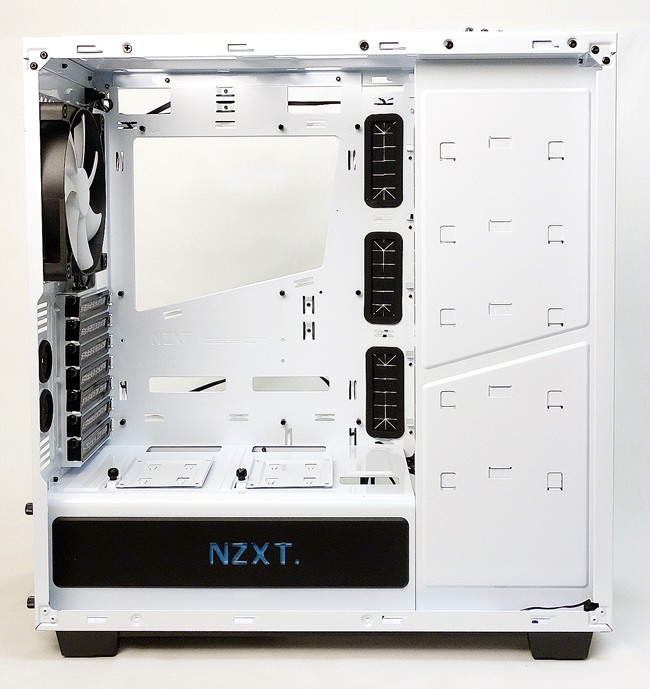 The most prominent feature is the NZXT LED logo and its illumination is controlled by the rear LED control switch. Above the logo, we see a pair of 2.5-inch drive trays. The stand-offs for the motherboard are already installed. From this angle of the above photo, you can see the perforated expansion slot covers, and the rear, bundled 140mm outlet fan. According to its manual, there's enough room to fit a radiator of a liquid cooling system with a single 120- or 140mm cooling fan. On a separate note, the Noctis 450 doesn’t support 5.25-inch optical disc drives, in case you are looking for ODD bays on this side of the chassis. 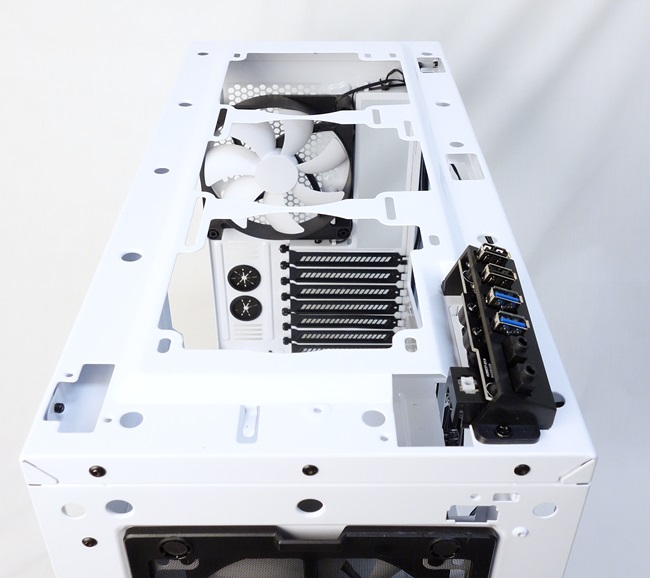 Write a Review
Compare This | Specifications
Interesting appearance
Well-ventilated
Comes with built-in LED lighting
PWM fan hub for automated cooling
No 5.25-inch drive mounting options
Taking the case apart is a tad tedious
Our articles may contain affiliate links. If you buy through these links, we may earn a small commission.
Sponsored Links