Note: This review was first published on 15 November 2022.

The incredibly powerful NVIDIA GeForce RTX 4090 that was launched last month finally heralds the start of a new 2-year cycle of generational GPUs. Our benchmarks of the RTX 4090 Founders Edition as well as ROG’s equally fantastic-looking Strix GeForce 4090 placed this GPU at the forefront of PC gaming performance – at 4K with ray tracing and all visuals’ settings maxed out. But it also comes at an equally jaw-dropping price tag, at US$1,599 for the Founders Edition and the ROG Strix’s at an eye-searing S$3,429.

Well, fret not. Tomorrow is the launch of the second RTX 40 series GPU, the RTX 4080 and its price tag, which starts from US$1,199 for the Founders Edition might be more appealing to the less wealthy of us. Let’s have a look at the card.

In terms of looks, the RTX 4080 FE is almost indistinguishable from its more powerful RTX 4090 FE sibling. The only difference being the “4080” markings on the card. That also means, which is not a surprise really, that it also uses the same contentious 16-pin 12VHPWR power connector that has been in the news lately due to reports of it overheating and melting. To be fair, I haven’t had any issues with it in any of my testing, but it is something to be aware about.

But there’s a silver lining: the RTX 4080 has a lower TDP of 320W as compared to the RTX 4090’s 450W. That 130 watts difference could be something of a big deal, if you take into considerations the upward trend of our electricity bills these days. It’s also worth noting that the RTX 3080, which the RTX 4080 succeeds over, also has the same TDP. So comparing gen to gen, NVIDIA has done some pretty cool wizardry to extract more performance out of its Ada Lovelace architecture for the same power draw.

Our graphics card test rig comes with the following specifications:

Unlike my RTX 4090 Founders Edition review, this time I will compare the RTX 4080 with a smaller range of RTX 30 series cards – starting from the RTX 3080 and upwards.

The Gigabyte’s card is arguably the oddest of the lot, but no Founders Edition of the 3090 Ti were sent to us. So, we’ll stick with that card as a gauge of how a 3090 Ti GPU fares against the RTX 4080.

Let’s look at the specifications of the RTX 4080 FE versus the rest of the flagship RTX 30 series cards:

The following synthetic benchmark and games were run, with the games chosen from a wide range of genres to give a better indication of performance across different segments: 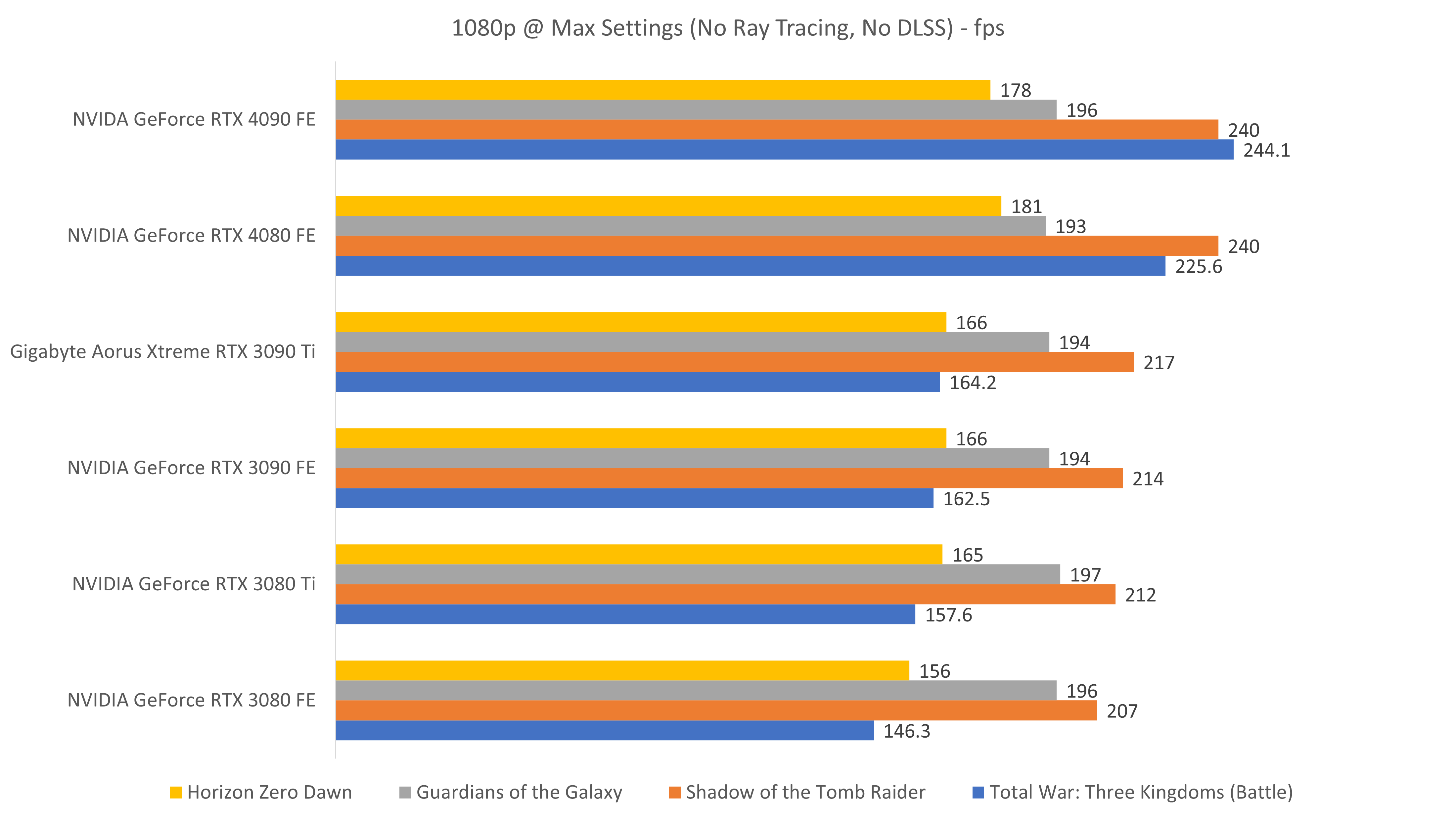 It's no surprise that the RTX 4090 still trumps here. But since CPU is the bottleneck at lower resolutions rather than the GPU, the gaps in performance isn't quite as stark. Still, the RTX 4080 beats out all of the RTX 30 series cards. I've said it before and I will say it again, the RTX 4090 and now the RTX 4080 as well, are truly meant for 4K gaming. 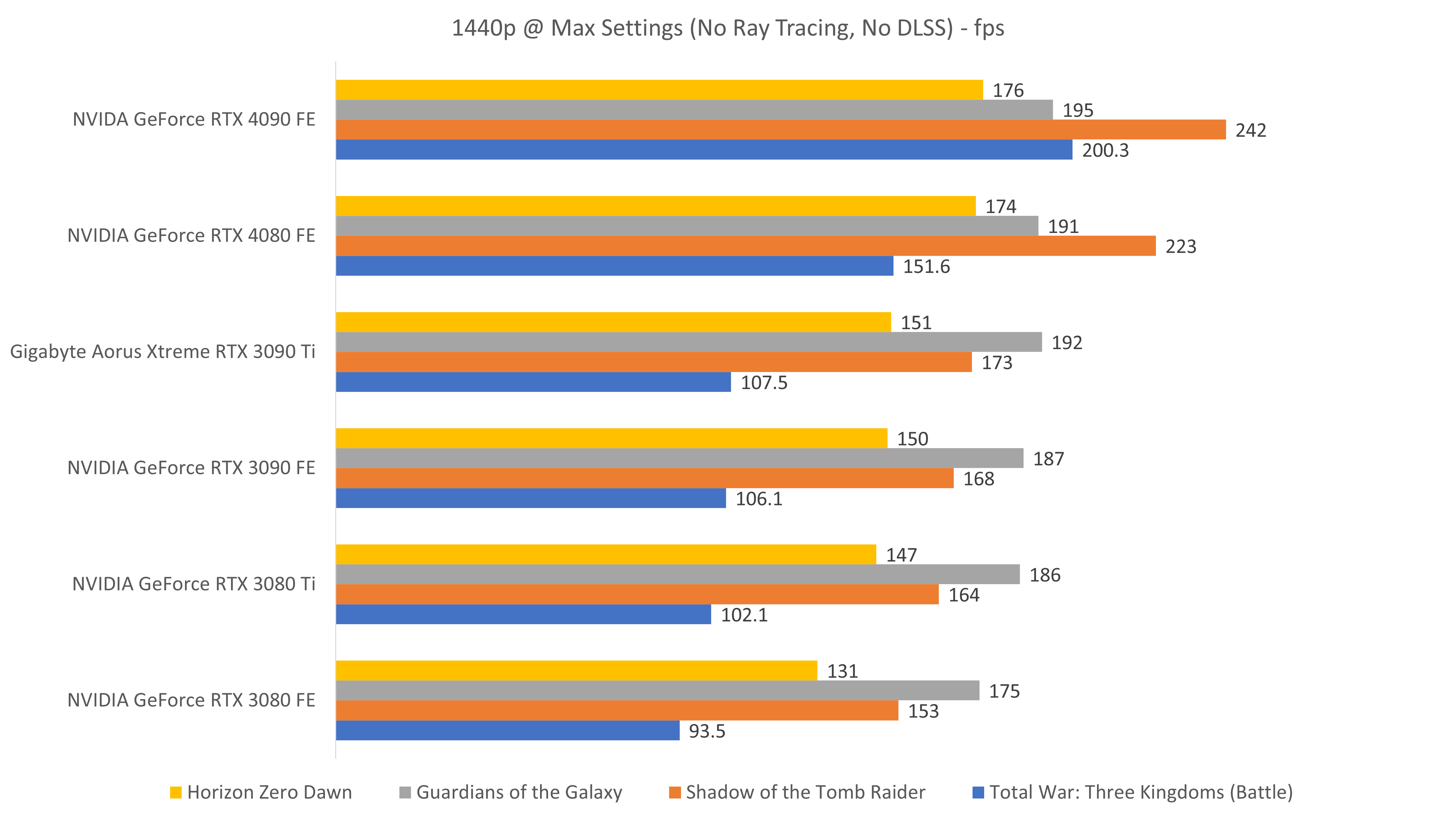 At 1440p, frame rates are more dependent on the GPU’s power and we can see gaps widening between the RTX 4080 and the rest of the RTX 30 series cards. At the same time, the 4080 more or less kept pace with the RTX 4090 but this is more likely due to the cards hitting the frame-rates ceiling of these titles at 1440p. Which also raises a very interesting point: Is 1440p going to be the new 1080p by the next GPU generation cycle? 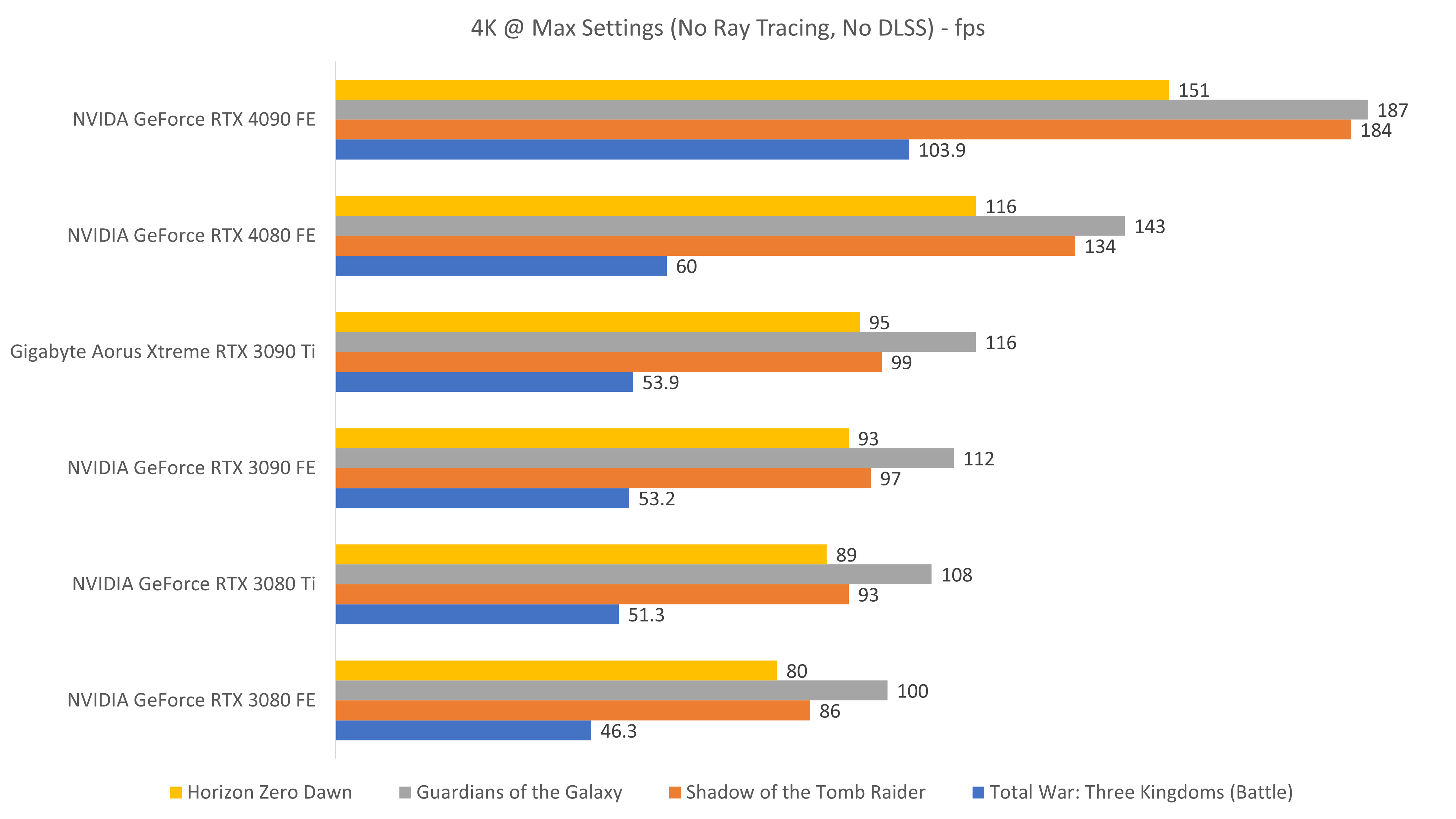 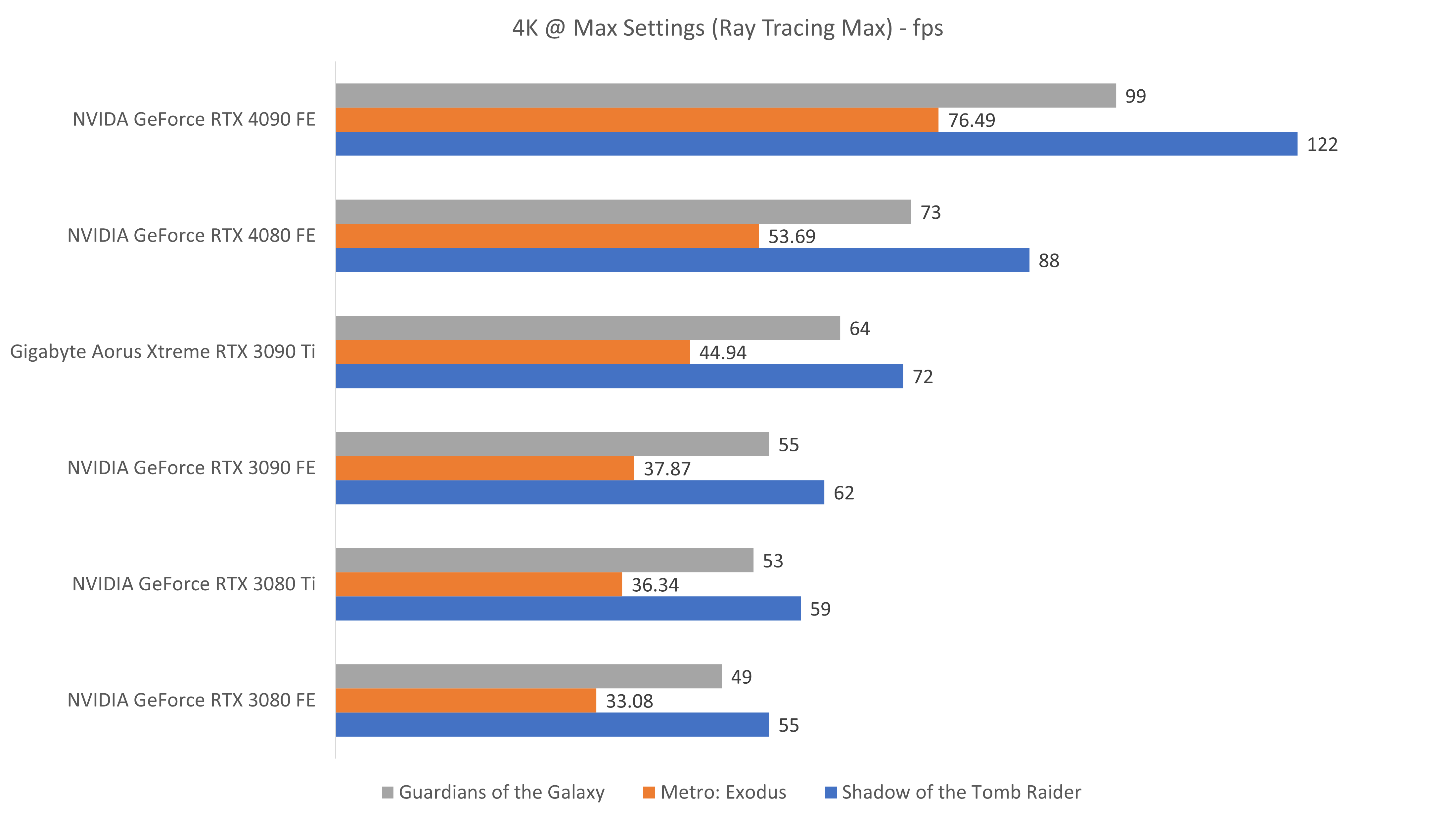 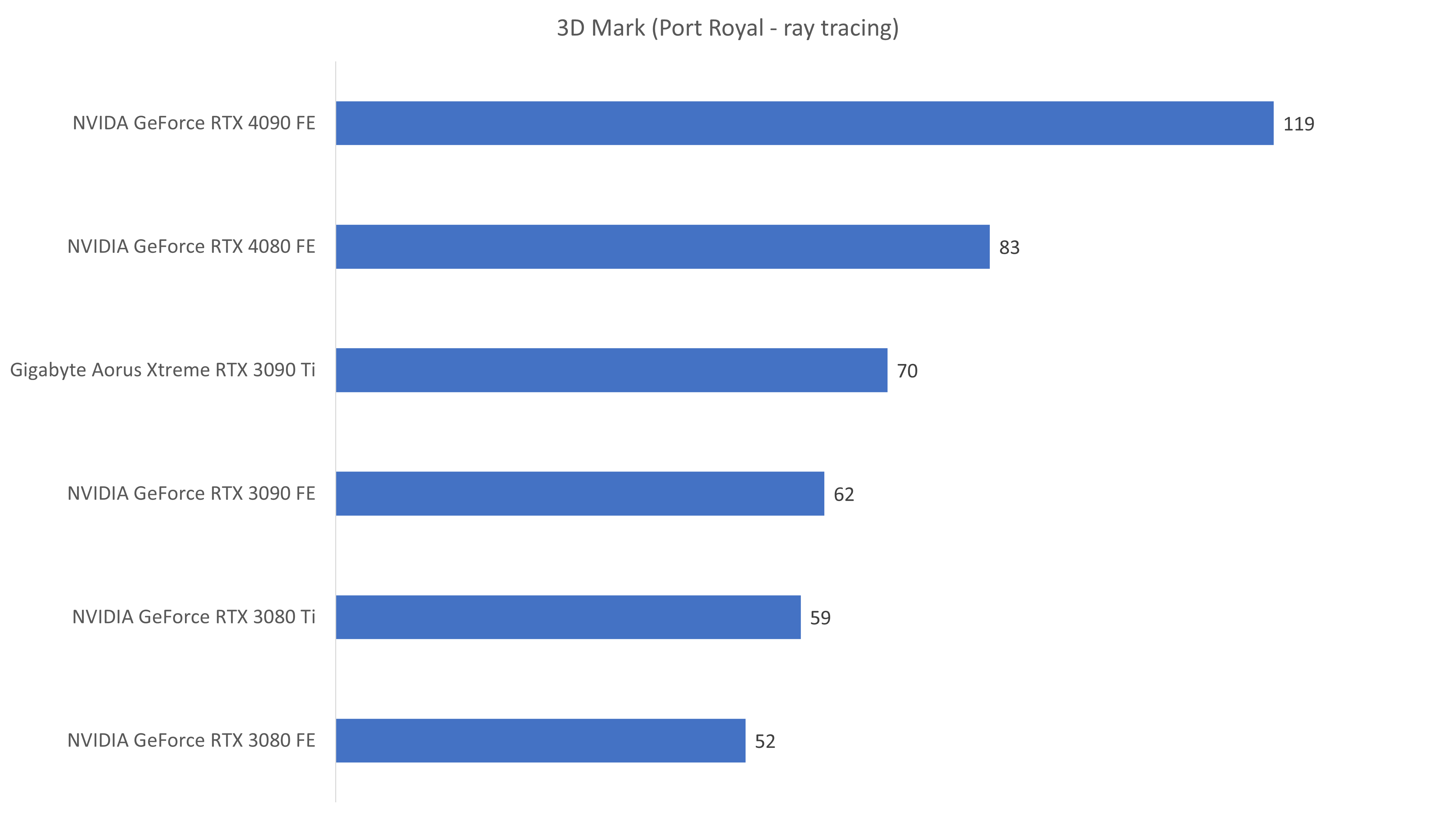 4K is still the pinnacle of gaming by modern's standard, and we see the RTX 4080 losing a lot of grounds to the RTX 4090. This is especially more so in Total War: Three Kingdoms, which is a notoriously GPU-intensive game.

Just base on 4K gaming performance alone, we can finally see how powerful the RTX 4090 really is when compared to a card just one tier below it. Even more so, when ray tracing is turned on. The performance gaps between the last-gen RTX 3090 and RTX 3080 isn't even that wide in comparison. 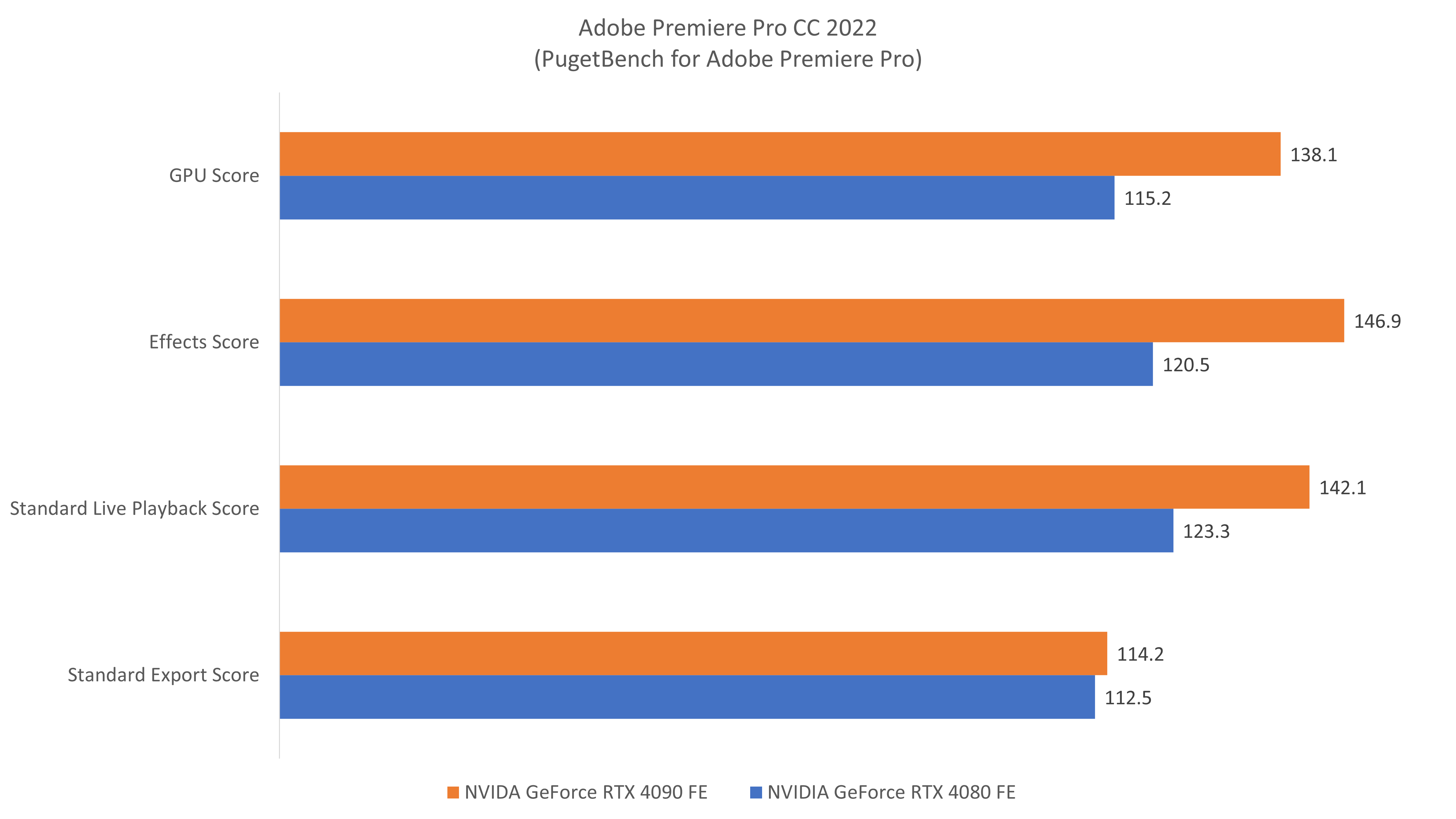 The RTX 4080 might have been flagged as a high-end PC gaming graphics card, but it’s more than that. Like the RTX 4090, it's also great card for content creators such as streamers, video editors and even 3D artists. With Adobe Premiere, it's a case of "paying for what you get" between both cards compared here and the utility is different from gaming as well. Is that uptick in exporting and rendering performances important to you, but for an additional US$400 more? 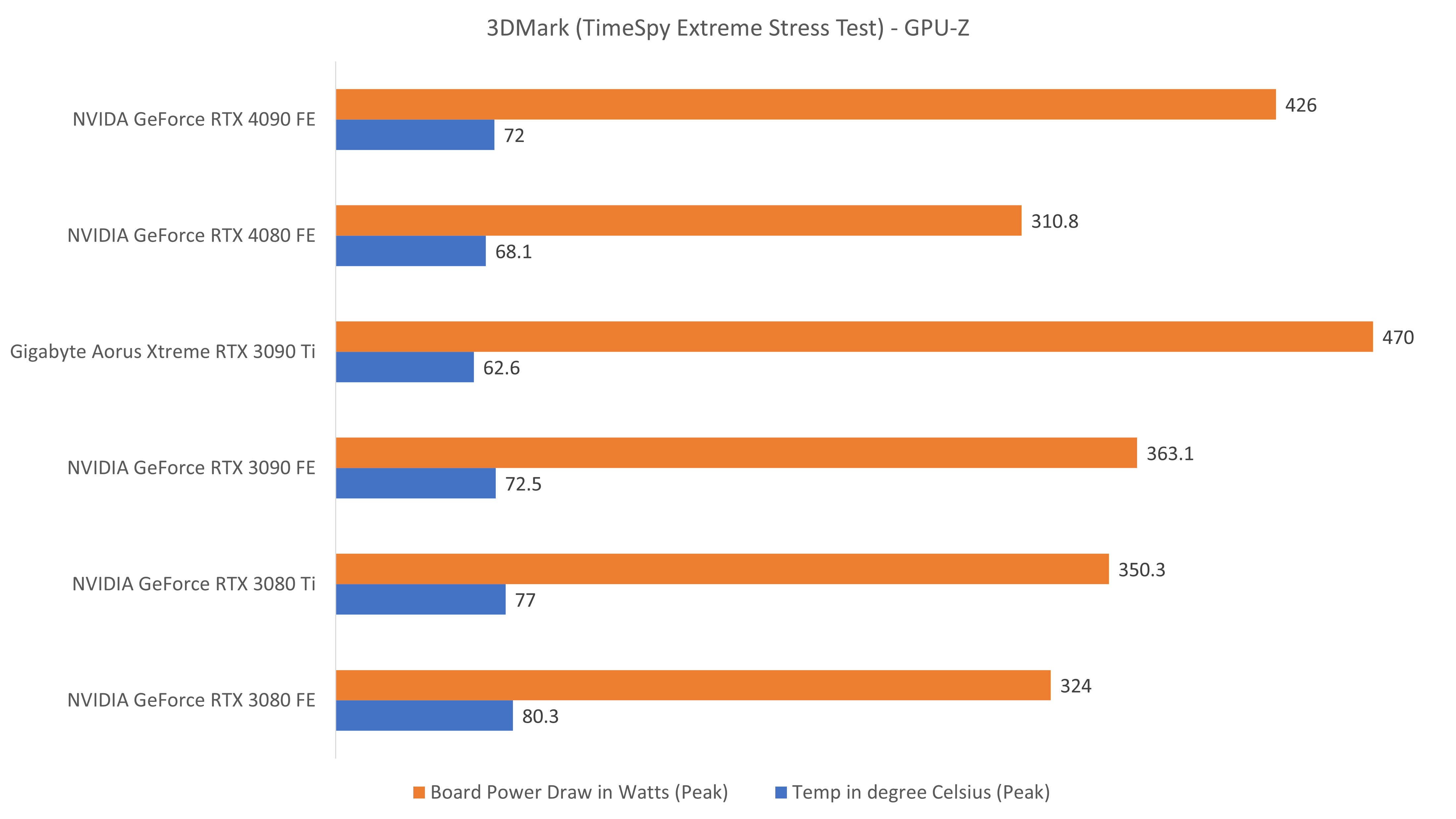 Now comes the most interesting part of the RTX 4080: It draws the least power out of all the cards compared here, and yet surpasses all of the RTX 30 series cards in performance. That's pretty astounding. Not to mention it runs the coolest among the Founders Edition cards too. It's an interesting argument to make when making a point for either the RTX 4090 or the RTX 4080. While the former is without a doubt the fastest card on the planet, the RTX 4080 seems to be easily the better choice if power efficiency matters to you.

In terms of strengths, the RTX 4080 is an incredible showcase of the efficiency of NVIDIA’s latest Ada Lovelace architecture. But on the other end of the spectrum, it’s also far behind the RTX 4090 in performance despite being close in price. Features like DLSS 3 still make the RTX 4080 shine when compared to other available – and older – graphics cards available, but gamers will have a tough choice to make between the “more affordable” and efficient RTX 4080 or the RTX 4090 that, to me, is the better value for money with its far superior performance.

With the previous-gen RTX 30 series, NVIDIA’s problem was having too many models that were very close in performance, despite the large differences in price – as we saw in the benchmarks above. Now, the company seems to have the opposite conundrum.

Write a Review
Compare This | Specifications
Fantastic power efficiency
Great gaming performance
DLSS 3.0 is a key hardware feature
The RTX 4090 might actually offer better value
Will be priced higher at retail
Our articles may contain affiliate links. If you buy through these links, we may earn a small commission.
Sponsored Links