Apple hikes prices of products in Japan by as much as 25%, unlikely to happen in Singapore (for now)
Product Listing
AlbatronAMDAorusASUSChaintechClub 3DEVGAForce3DGainwardGalaxGalaxyGeCubeGigabyteHISInno3DLeadtekManliMSINVIDIAPalitPowerColorSapphireSparkleXFXXpertVisionZotac

** Note - This review was conducted with an early set of drivers and doesn't represent the potential of the new card. We've since tested the card again on 2nd October with newer drivers that represent its capabilities better.

The NVIDIA GeForce GTX 980 graphics card marks the first attempt by the company to make full use of the Maxwell architecture. However, it is not the first to make use of this new GPU architecture as that honor goes to the GeForce GTX 750 Ti. In fact, the GTX 980 and GTX 970 are based on the second generation Maxwell design, which has numerous improvements and new features that you can read up on here.

To date, the GeForce GTX 980's new GM204 GPU is the fastest chip from the GeForce series. For the GTX 980, it has a base clock speed of 1127MHz, and a 1216MHz boost clock. Despite its sky-high clock speeds, the rated TDP of the card is a low 165W. One of the touted features is the new card's improved power efficiency. As we know that the Maxwell architecture is based on the same 28nm manufacturing process as the previous generation Kepler GPU; such improvements come entirely from the strengths of the new microarchitecture.

The Maxwell architecture features a reworked Streaming Multiprocessor (SM) known as the Maxwell Streaming Multiprocessor (SMM). The GM204 features 16 SMMs, that make up four Graphics Processing Clusters (GPC) that are also found on Kepler and Fermi GPUs. However, the GM204 GPU has only four 64-bit memory controllers, like the GTX 680 chip, and a collective memory bus that is 256-bit wide. For the first generation Kepler GPU, the reduced memory bus was attributed to its targeted (and reduced) die size of 294mm squared; however, with larger die size of the GM204 (384mm squared), the number of memory controllers remained the same. But the GTX 980 video memory capacity stands at 4GB, with a clock speed of 7010MHz to provide a rather low memory bandwidth of 224.4GB/s - roughly a third that of the GeForce GTX 780 Ti. 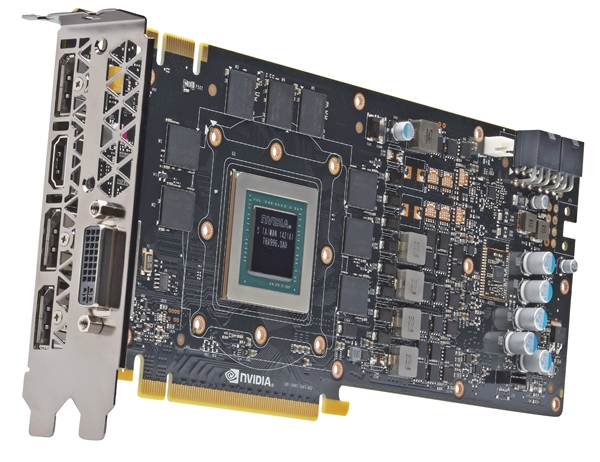 The increased capacity of its video memory buffer will be handy as the new card is touted to be able to drive a pair of Utra HD 4K displays at 60Hz refresh rate. In addition, the new HDMI 2.0 standard is supported - this new standard will be able to support 4K video at up to 60fps. In terms of video connectivity options, there are three DisplayPort 1.2 connectors, one HDMI 2.0 connector, and one dual-link DVI port. The maximum resolution supported by the card is a whopping 5120 x 3200 pixels!

Here's a look at how the NVIDIA GeForce GTX 980 card compares against the competing cards:

Here's the full list of benchmarks that we'll be using for our assessment:-

For our temperature, power consumption and overclocking testing, 3DMark 2013 was used.

Write a Review
Compare This | Specifications
Good power efficiency
Highly overclockable
New features like MFAA, DSR
Support for HDMI 2.0
Lower price
Performance only on par with GTX 780 Ti
SLI setup required for optimal 4K gaming
Our articles may contain affiliate links. If you buy through these links, we may earn a small commission.
Sponsored Links