NVIDIA has just announced its new GeForce GTX 780 and it sports the same Kepler GK110 GPU; albeit the GPU has been 'pared down' to support 2304 CUDA cores for the new card. This translates to approximately a reduction of 16 per cent from the 2688 CUDA cores of the GTX Titan as NVIDIA has disabled two Streaming Multiprocessors (SMX) units for the GTX 780. It also features less onboard video memory, with 3GB of GDDR5 frame buffer. In terms of absolutes, its GK110 GPU has a base clock of 863MHz and a boost clock of 900MHz, and they are higher than that of the GTX Titan. On the get-go, just like its model number suggests, the GeForce GTX 780 seems to be an ideal companion for the enthusiast and hard-core gamers rather than the over-the-top GTX Titan that's more suited for engineering tasks at a personal level with even more CUDA cores and a 6GB frame buffer that won't be of much advantage for gaming needs.

Out of the box, the GTX 780 is compared directly with the GTX 680 but from the wide variance in terms of their hardware specifications, we felt that it may not be a fair comparison. Besides boasting 50% more memory bandwidth than the GTX 680 with a 384-bit memory interface, the GTX 780 literally does a one-up with its 3GB VRAM, clocked at 6008MHz DDR (GDDR5) as the GTX 680 only sports 2GB of frame buffer. The TDP of the GTX 780 is rated at 250W, which is much higher than the GTX 680's 195W. This is acceptable considering that the two cards use a GPU core that's quite a bit different in capabilities - GK104 vs. GK110.

In terms of length, the reference card measures 266mm that puts it right between the shorter 255mm GTX 680 and the longer 280mm GTX 690; while making it as long as  the GTX Titan. In terms of video connectivity options, the card features the expected two DVI ports, one HDMI port and one DisplayPort output.

Despite their similarities, the GTX 780 does sport an improvement over the Titan as it features a new fan controller that uses an adaptive temperature filter with a control algorithm, which centers on fan speed and temperature in order to eliminate the unnecessary fan fluctuations to reduce fan noise. As this is a hardware feature, this update won't be available with the existing GeForce graphics cards, even the Titan. 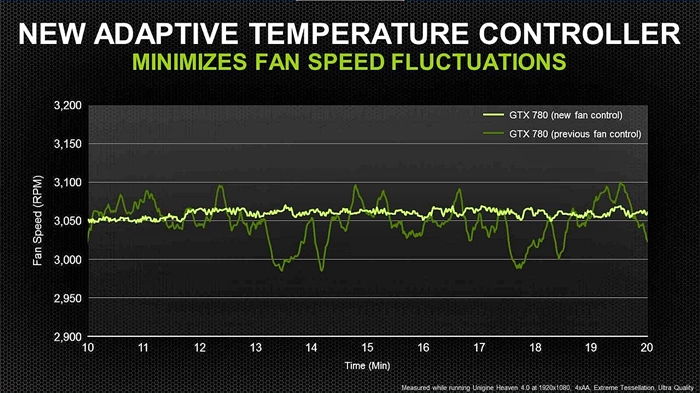 The GTX 780 will retail for US$649, which makes it much cheaper than the GTX Titan at launch as its SRP was US$999. Even so, this is still a lot more expensive than the US$499 SRP that the GeForce GTX 680 had when launched. As usual, local pricing isn't available yet for all add-in board partners, but we've gotten word that ASUS will retail its GeForce GTX 780 for S$1,059. Also, the current salvo released by the various vendors will not deviate much in terms of fan/cooler design from the reference GeForce GTX 780. NVIDIA did mention we could look forward to custom designs a few months later, but if history serves as right, there won't be many such options on the top-end spectrum like the GeForce GTX 780 and they are bound to be even more expensive.

Write a Review
Compare This | Specifications
Massive improvement over GTX 680
Excellent all-round performance
Easy to overclock
Relatively quiet even at high fan speed
Expensive compared to previous generation GTX 680 at launch
Seen as playing second fiddle to the GTX Titan
Our articles may contain affiliate links. If you buy through these links, we may earn a small commission.
Sponsored Links