*Updated as of 2nd June 2013 - Originally published as a preliminary review on 30th May, we've since refreshed our comparison results to update the article to a full review, complete with ratings.

Over a year ago, NVIDIA introduced the first of their first 28nm GPU based on their new Kepler architecture - the GeForce GTX 680 - to critical acclaim. The then new GeForce GTX 680, and specifically its GK104 GPU, was quite simply astounding in many ways, offering unprecedented levels of performance at unheard of power levels.

Mostly recently, NVIDIA topped that off with the GeForce GTX Titan, which unleashed the full unbridled fury of Kepler onto any gamers with deep enough pockets to get their hands on one. With its 2688 CUDA cores, it is the fastest single GPU card we have ever tested. 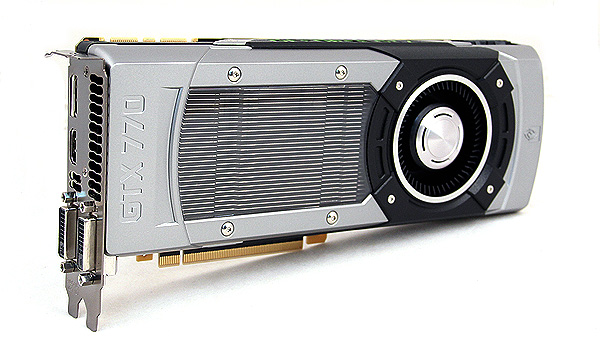 This means 8 SMX units and a grand total of 1536 CUDA cores. Base clock speeds have been boosted to 1046MHz (up from 1006MHz); but maximum GPU Boost clock speeds have been toned down to 1085MHz (down from 1110MHz). Finally, memory clock speeds received the most substantial boost and is now a staggering 7012MHz DDR (up from 6008MHz DDR). It is the first graphics card to boast a 7GHz memory clock rate, thus setting its own little record. The card will be offered by NVIDIA’s add-in board partners with either 2GB or 4GB of GDDR5 framebuffer.

The GeForce GTX 770 will also benefit from NVIDIA’s second generation GPU Boost 2.0 technology. As detailed in our review of the GeForce GTX Titan, in which this new technology debuted in, GPU Boost 2.0 now uses a GPU temperature threshold to determine if clock speeds can be further boosted. Power draw is still a considering factor, but no longer the main one.

Write a Review
Compare This | Specifications
Decent improvements over the GTX 680
Quiet cooler
Price is attractive in the USA
Higher power consumption
Slightly warmer operation
Local price points can be better
Our articles may contain affiliate links. If you buy through these links, we may earn a small commission.
Sponsored Links