Far Cry 3 features heavy tessellation, high amounts of volumetric lighting, and deferred radiance transfer volumes (global illumination). This is because the game is running on the Dunia 2 Engine, a modified version of Crytek's CryEngine.

With anti-aliasing disable, the GeForce GTX 760 was beaten by a a few points, in terms of average frame rates per second, by both the NVIDIA GTX 670 and GTX 660 Ti. It only fared better at 8X MSAA, as it managed to turn the tables on the GTX 660 Ti; however, its average frame rate per second fell below the 30fps mark for both resolutions. 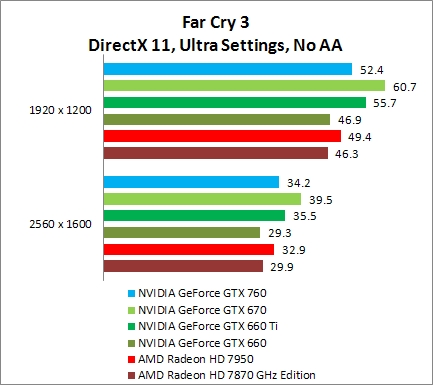 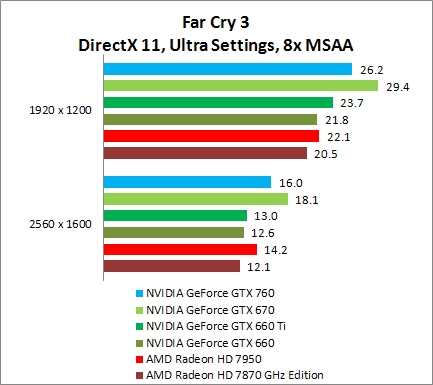 Running on IO Interactive's proprietary Glacier2 engine, Hitman: Absolution is a challenging benchmark. It features a very hardware intensive engine that is able to render up to 1200 NPCs simultaneously. The benchmark tool used to test this game is extremely intensive, besides the massive crowd of NPCs, it also features Reflective Shadow Mapping (RSM), Direct Compute accelerated Bokeh Depth of Field, extreme tessellation and Ambient Occlusion.

The GTX 760 managed to keep its lead over the GTX 660 and GTX 660 Ti cards; its performance level was almost on par with the GTX 670, when anti-aliasing was set at 8x. However, at this particular setting, none of the cards managed to generate more than the 30fps average frame rate and this made gameplay rather jerky.

For mid-range graphics cards, it's always advisable not to push the quality levels to the extremes that we test. For example, you can choose a lower resolution like 1080p and don't set 8x MSAA. But if you insist on having some form of anti-aliasing, go for FXAA or TXAA which are both based on post-processing anti-aliasing techniques and consume much lower processing overhead. 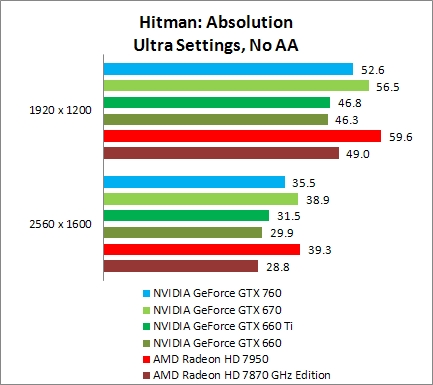 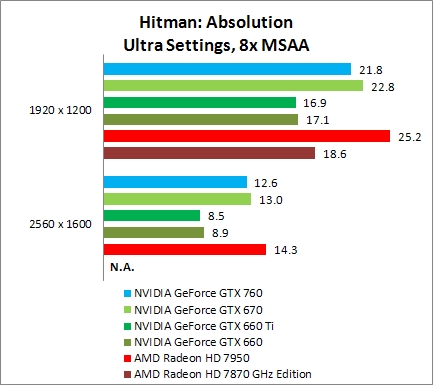