Crysis 3, the much anticipated sequel to Crysis 2 and continues to be an absolute beast of a game, , much like its predecessors. It utilizes CryEngine 3, with extreme amounts of tessellation, per-pixel per-object motion blur, Bokeh Depth of Field, displacement mapping on small terrain, particle and volumetric lighting and fog shadows, improved dynamic cloth and vegetation, dynamic caustics and diffuse shadows.

On this benchmark, the GeForce GTX 760's performance was the worst, even falling behind the GTX 660 Ti (without anti-aliasing). Its overall performance was rather similar to the AMD Radeon HD 7950; while compared with the GTX 670, it was trailing behind, with margins that ranged from 12- to 22%. 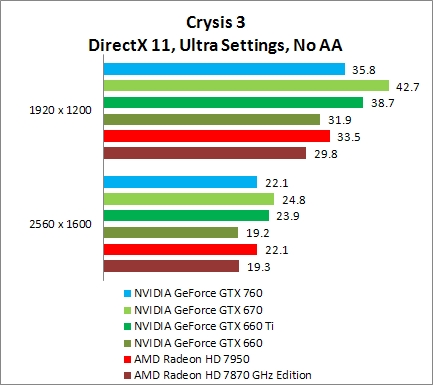 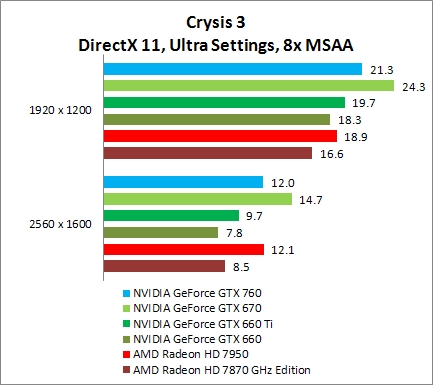 We managed to overclocked the reference NVIDIA GeForce  GTX 760 card to a high of 1093MHz for its GK104 GPU; while for its video memory, it was overclocked to 6456MHz. This translated to perform gains that ranged from 13- to 15% as opposed to its default clock speeds and took the GeForce GTX 760 that was hovering about the GeForce GtX 660 Ti levels to that of a GeForce GTX 670 (non overclocked).

On as a side note, take note that with the exception of the NVIDIA GeForce GTX 670, we didn't have time to obtain new overclocked results on a more recent driver set. 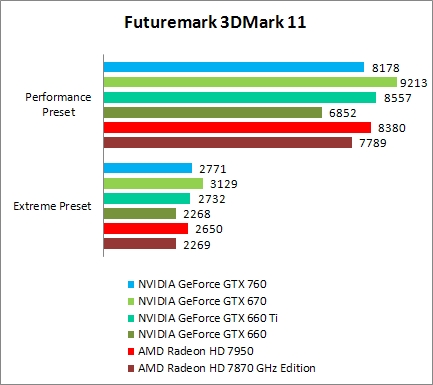 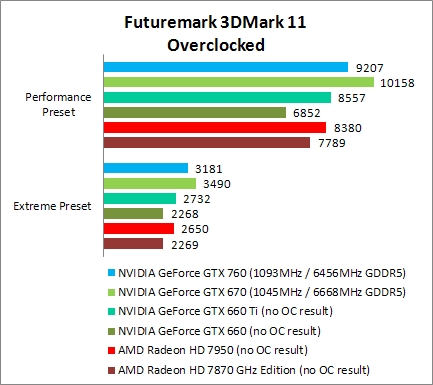