Crysis is our one of our older real world game-based test. At Ultra settings, this benchmark is still able to put GPUs through their paces with a grueling test of tessellation, Parallax Occlusion Mapping, water rendering, particle motion blur and shadowing. 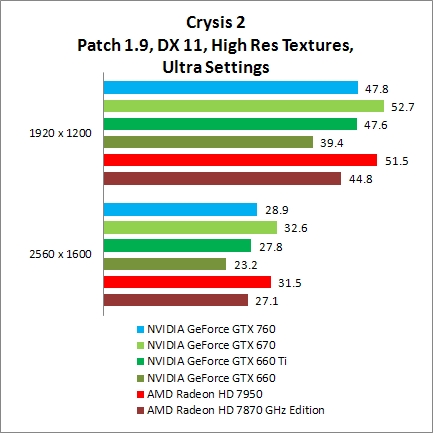 Tomb  Raider is our one of our latest gaming benchmark, and it replaces Dirt3. This title has been updated to feature the heavily-modified Crystal Engine, with support for DirectX 11. Besides hardware tesellation and DirectCompute, other render technologies like depth of field, high definition ambient occlusion, and contact-hardening shadows are accessible during the benchmark. Last of all, Tomb Raider features the AMD's real-time hair physics system called TresFX.

On the lower resolution of 1920 x 1200 pixels, the GTX 760 performed well by churning out frame rates that were above 40fps. Its closest competitor was the AMD Radeon HD 7950. However, at the resolution of 2560 x 1600 pixels, the average frame rates of all the cards, with the exception of the NVIDIA GeForce GTX 670, fell below the 30fps mark. 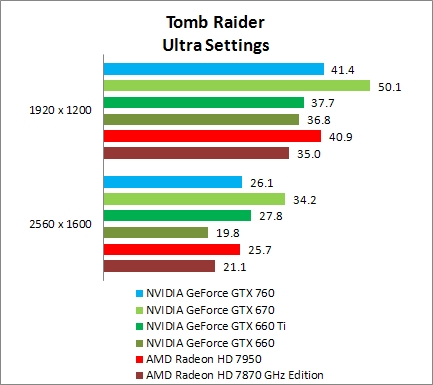