Now here’s where it starts to get even more interesting. Ashes of the Singularity supports both DirectX 11 and 12, so we were able to benchmark the cards in both modes to see how well they were able to take advantage of DX12 features like asynchronous compute. This is also the game in which AMD has held a strong advantage over NVIDIA, thanks in large part to GCN’s asynchronous shaders. However, it looks like NVIDIA has wrested back control in the battle to maximize the potential of DX12.

Unlike its Maxwell cards that eeked out paltry gains at best when moving from DX11 to 12, the GeForce GTX 1080 demonstrated a marked 19 percent improvement in performance at a 1080p resolution and High settings. However, the performance boost was whittled down as we ramped up the resolution and settings, until there was barely any improvement at the most demanding settings. This was in contrast to the Radeon Pro Duo, which still managed to post a 24 percent improvement upon switching to DX12.

NVIDIA and AMD both support asynchronous compute slightly differently, so it may be that Ashes is better able to take advantage of AMD’s implementation. 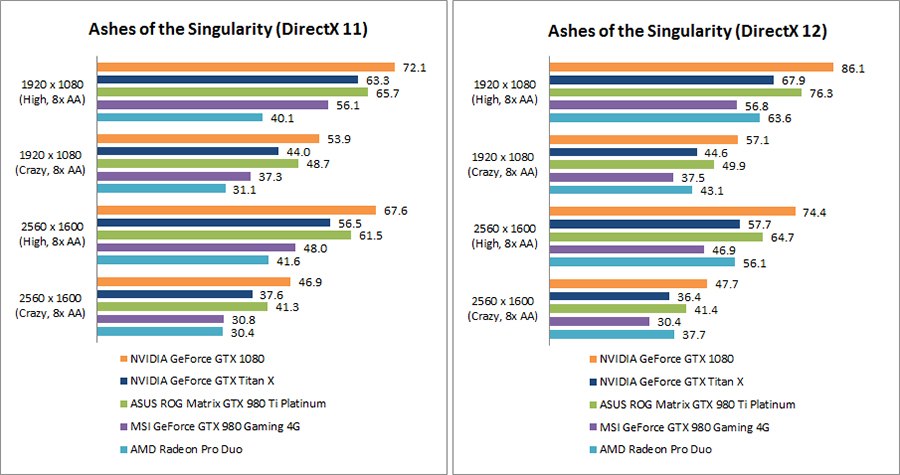 Note: The AMD Radeon Pro Duo ran into some glitches while running in DirectX 11 mode in Hitman. Not only did the benchmark take inordinately long to load, it consistently crashed with all the settings set to maximum, which was why we were unable to obtain a score for our final DX11 benchmark

On top of that, the GeForce GTX 1080 posted decent performance improvements when moving from DX11 to 12. One interesting thing to note is that the gains are a lot larger at a 1080p resolution, regardless of the other settings. For instance, while it enjoyed a 20 percent improvement at a 1080p resolution and Ultra settings, it only had a modest 10 percent gain at 1600p. 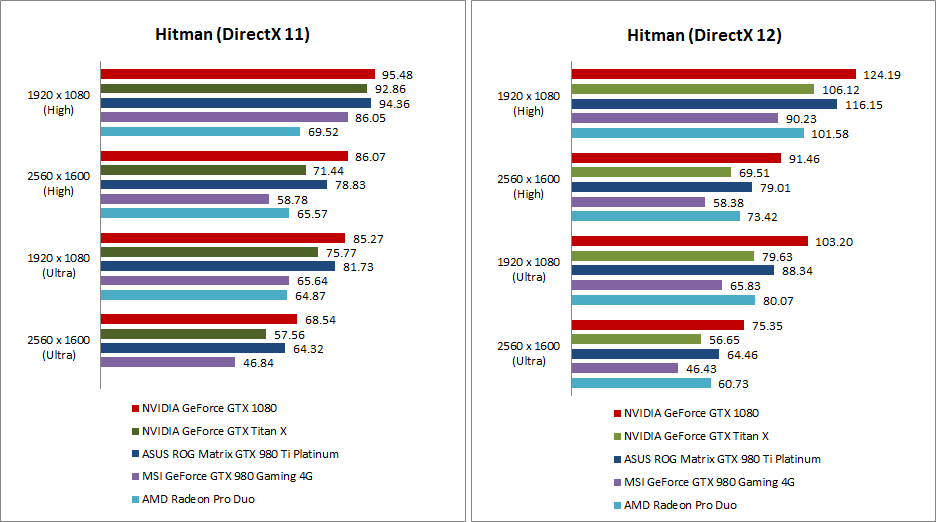 There isn’t much to remark on in the temperature department. At 82°C, the GeForce GTX 1080 performed more or less in line of the Titan X, which uses a similar cooling design. The other cards utilized custom coolers, so it’s no surprise that they wound up being quite a bit cooler.

But be that as it may, do note that our readings were obtained over an extended period of looping 3DMark Fire Strike Extreme, and temperatures during real-world use are actually quite a bit lower. Furthermore, the blower-style fan proved quite effective at bringing temperatures down quickly. In fact, we noticed the temperature was able to drop from around 60°C to 40°C in a matter of seconds once the card stopped working so hard.

Using a beta version of EVGA’s Precision XOC utility provided to us by NVIDIA, we were able to achieve a 246MHz overclock over the base speed, and boost the memory clock to 10,704MHz. However, one quirk is that these changes are not reflected in GPU-Z, even though the GPU is clearly being overclocked, as evinced by our benchmark scores (we’re not sure if this is a result of GPU Boost 3.0, or if it’s merely a glitch in the beta software or GPU-Z). This ultimately translated into a boost clock of 2,114MHz, although our monitoring software showed that it only peaked at this level at the most demanding scenes.

In 3DMark, this resulted in anywhere between a 5 and 10 percent boost in performance. That may not seem like a lot, but bear in mind that this is just a synthetic benchmark, and your mileage in actual games may very well vary. 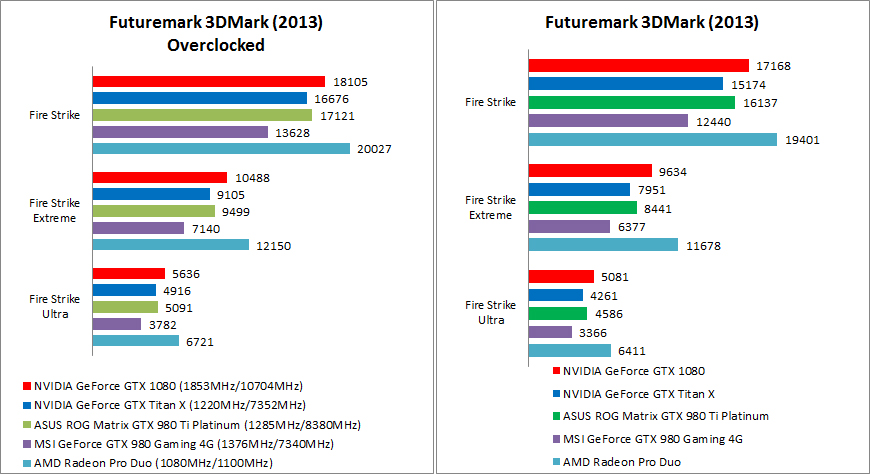