Pascal also sees the introduction of a new version of GPU Boost. With GPU Boost 3.0, NVIDIA now offers custom per-voltage point frequency offsets, allowing the GPU to maximize the headroom beyond a fixed frequency offset. It is a natural evolution of GPU Boost 2.0 – while the latter could already dynamically vary the boost speed according to temperature and load, it remained limited to a fixed frequency offset across all voltages. The problem with this is that the resulting voltage/frequency curve isn’t necessarily in sync with what the GPU is really capable of, resulting in lost potential headroom. 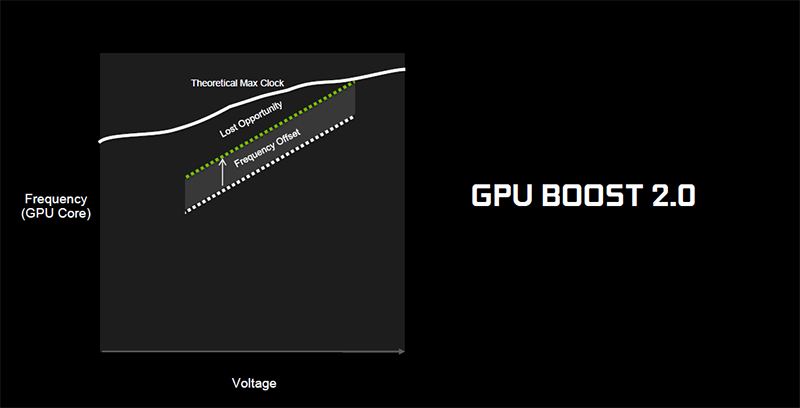 GPU Boost 3.0's support for per-voltage offsets corrects this. By adding an additional parameter to vary the frequency offset by – in this case voltage – any lost performance opportunity can be minimized.

Also new is support for overclocking scanners, like the OC Scanner utility now built into the latest version of EVGA’s Precision XOC software, that automatically stresses the GPU and creates a custom V/F curve unique to your individual card. That effectively takes some of the guesswork out of overclocking, allowing you to get more out of the card more quickly and easily. 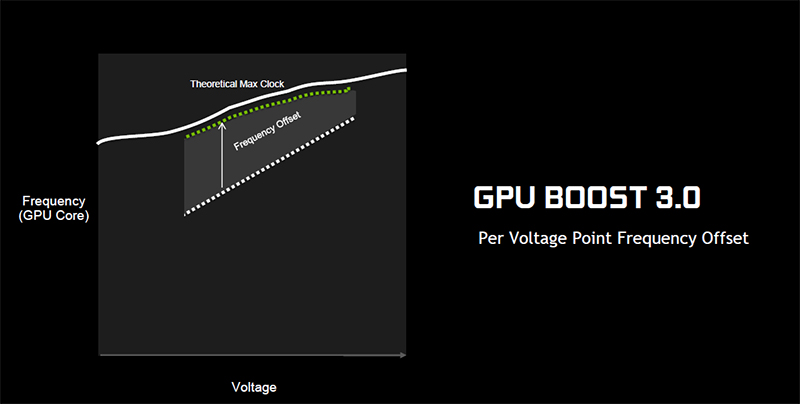 On the other hand, FastSync is yet another technology to provide a smoother, tear-free, and low latency gaming experience in the tradition of V-Sync and G-Sync, except it has nothing to do with the panel's refresh rate. However, while G-Sync sees the most benefit in demanding games that operate below your monitor’s refresh rate, FastSync targets less demanding titles that can output frames well in excess of the panel’s refresh rate. You can enable it as a new option in the NVIDIA Control Panel.

One such game it addresses is Counter-Strike: Global Offensive, which is typically capable of running in the range of 200 to 300fps on high-end cards. FastSync’s objectives are to provide a low latency gaming experience, while still eliminating tearing, and it does this by decoupling the frame rendering and display stages from the rest of the pipeline.

This allows the GPU to continue to work as fast as it can, and store excess frames temporarily in the GPU frame buffer. If V-Sync were on, the game engine would have to wait for the display to refresh, creating a backpressure of frames and increasing input latency. With FastSync, the GPU can render frames unhindered, so there is no backpressure and latency is reduced, but it also cherrypicks frames from the frame buffer to display, so tearing is avoided as well.

This is made possible by the addition of a third frame buffer called the Last Rendered Buffer (LRB) to the existing front and back buffers. As its name suggests, the LRB holds the most recently rendered back buffer, until the front buffer finishes scanning. The LRB is then copied to the front buffer, and the process repeats itself. But the crucial thing to note is that the LRB and back buffer follow a flip logic, so they effectively take turns holding the latest rendered frame while waiting for a scan interval to complete, which is how the pipeline can continue without slowing down. 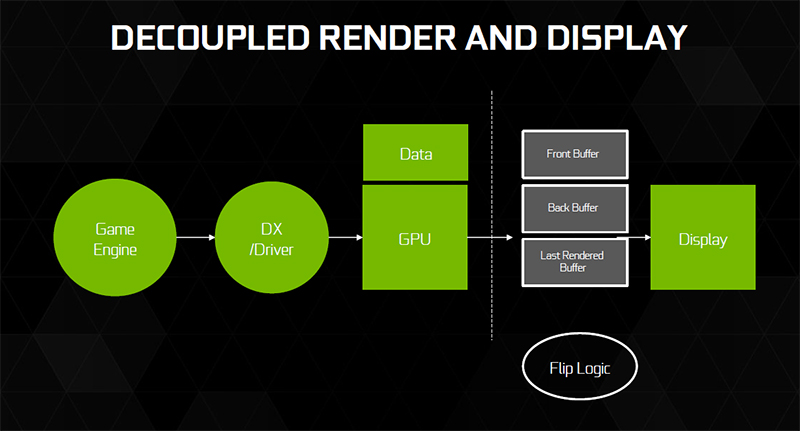