For all the talk about a new architecture, this actually isn’t the first time we’ve seen Pascal. It first showed up in NVIDIA’s Tesla P100, which was announced back in April at GTC 2016. But that was a data center GPU based on the GP100 chip, used for powering huge server arrays and training deep learning networks, whereas the GeForce GTX 1080 is an unabashedly gaming-oriented card featuring the GP104 GPU. 4K gaming? Check. Virtual reality? Check. New features for lower latency and smoother gameplay? Check, check, check.

For a clearer idea of what 16nm FinFET does, you only have to look at the card's TDP. This is 180 watt card that's more powerful than both the GeForce GTX 980 Ti and Titan X, both of which are 250 watt cards.

Here’s a look at the block diagram of the GP104 GPU. The GeForce GTX 1080 features four Graphics Processing Clusters (GPCs), which are in turn comprised of five Streaming Multiprocessors (SMs), for a total of 20. Every SM is also paired with a Polymorph Engine that handles things like tessellation and perspective correction, and the both combine to form what is called a Texture Processing Cluster (TPC). 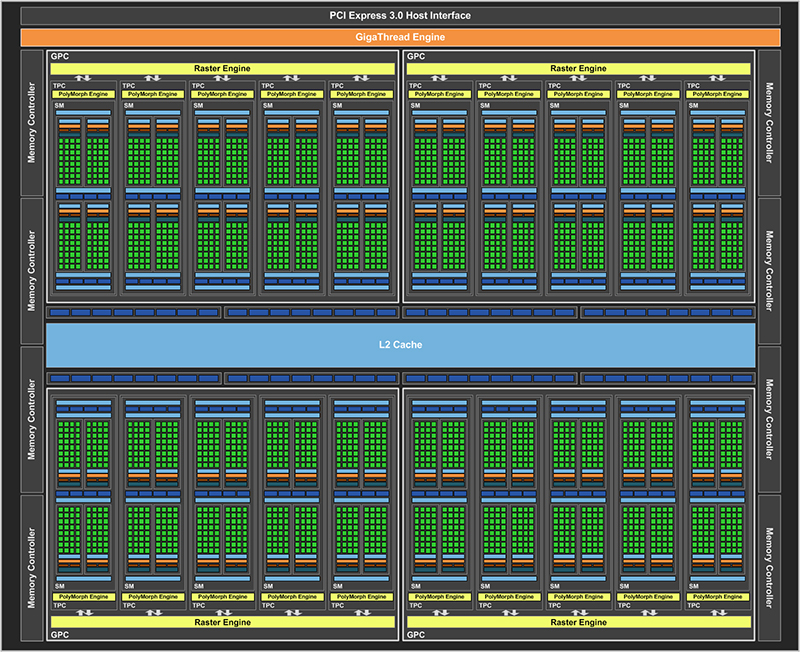 And instead of the six 64-bit memory controllers on the GM200 GPU on the GeForce GTX Titan X, the new GP104 GPU has eight 32-bit memory controllers, making for a narrower 256-bit memory bus. Again, this doesn’t mean that the Titan X comes out ahead. Combined with 8GB of GDDR5X memory clocked at 10,000MHz, the GeForce GTX 1080 can effectively lay claim to 320GB/s of bandwidth, just a hair short of the Titan X’s 336.5GB/s. 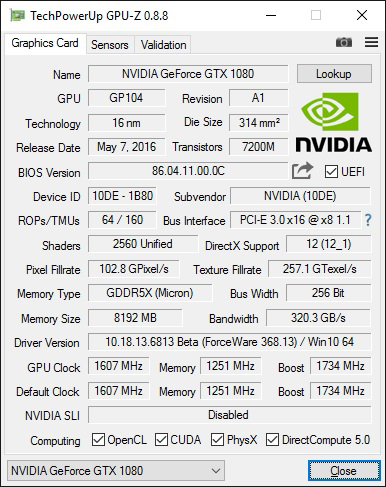 Coming from Maxwell, the key difference is that Polymorph Engine 4.0 (Maxwell uses version 3.0) now comes with a new component, called a Simultaneous Multi-Projection (SMP) unit. In a nutshell, this SMP unit is responsible for generating multiple projections of a single geometry stream, and can enable things like improved performance in VR applications, and also a better experience with surround displays (more on that later).

It essentially enables the GPU to process geometry through 16 different pre-configured projections from a single viewpoint in one pass. In terms of the graphics pipeline, a new multi-projection stage enters the pipeline after the geometry pipeline and downstream of the shader stages, so the GPU doesn’t have to repeat all the work for each projection. Furthermore, because each primitive – a basic graphics building block such as a point or line – may appear in multiple projections at the same time, the SMP engine allows the game or application to instruct the GPU to replicate it up to 32 times (16 projections multiplied by two viewpoints for stereo images) without any additional overhead. 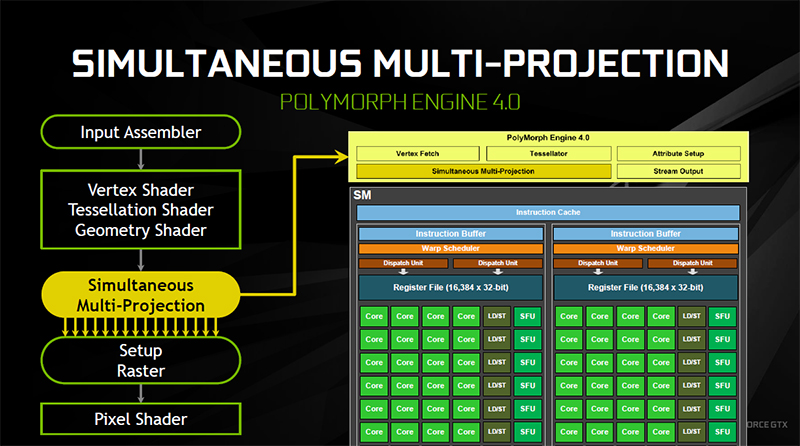 All these processes are hardware accelerated, never once leaving the chip, and they are responsible for Pascal’s ability to deliver multiple projections – a feature which has several useful applications as we’ll see soon – with minimal impact on performance.