Here’s a list of all the compared cards and their driver versions:

Our performance benchmarks now include a handful of the latest titles, including games that utilize DirectX 12. We’ve also included the new 3DMark DirectX 12 benchmark, Time Spy, to provide more insight into the card’s ability to take advantage of DirectX 12 features.

As expected, the US$139 GeForce GTX 1050 Ti fitted right into the gap between the AMD Radeon RX 460 and 470. The more expensive Radeon RX 470 takes quite a commanding lead, coming in between 44 and 50 per cent faster than the new NVIDIA card.

Still, the card managed a decent showing against the US$100 Radeon RX 460, AMD’s cheapest Polaris graphics card. In the 1080p 3DMark Fire Strike benchmark, it was 28 per cent quicker. Of course, the more appropriate contender would have been a GTX 1050 and not a GTX 1050 Ti card to bench against the Radeon RX 460, but we'll have to wait for another day to test it out.

These performance differentials were mirrored in the DirectX 12 Time Spy benchmark as well, where the new GP107-based card lagged behind both the Radeon RX 470 and GeForce GTX 1060 but trumped the Radeon RX 460. 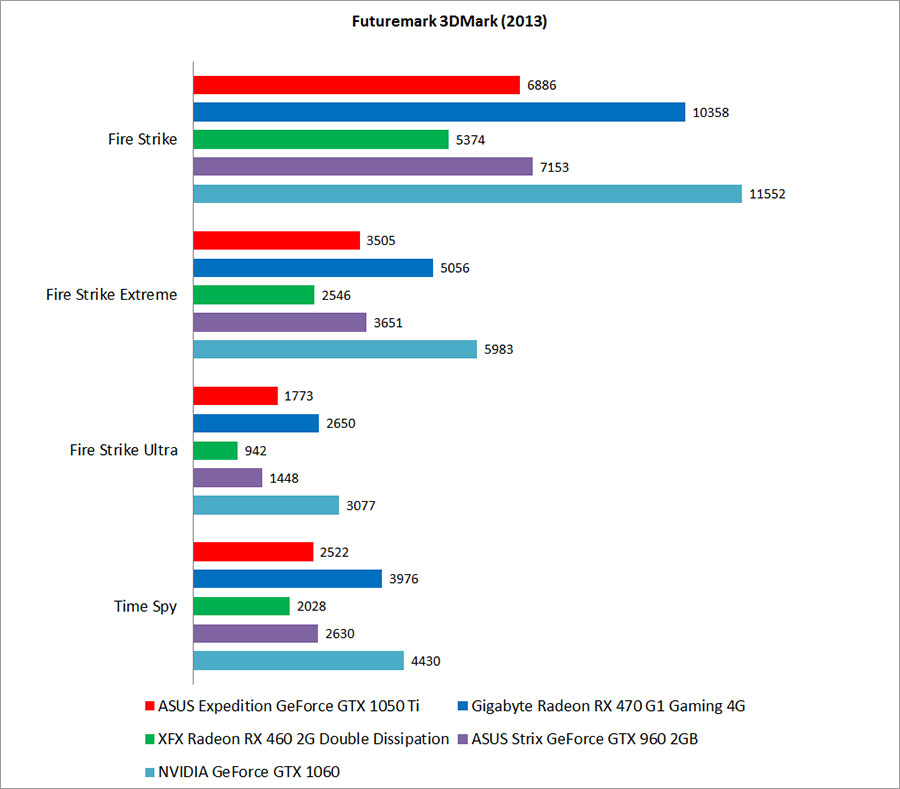 Because of the demanding resolutions that we run Shadow of Mordor at, this is a benchmark that is very much dependent on the memory bandwidth available. As a result, our 2GB version of the GeForce GTX 960 didn’t fare as well against the GeForce GTX 1050 Ti with 4GB of GDDR5 memory, where it ended up trailing by up to 13 per cent.

The card was also a good 50 per cent faster than the Radeon RX 460, but the latter is also memory starved like the GeForce GTX 960.  Even so, it's clear that NVIDIA is staking out the middle ground between the Radeon RX 460 and 470 (considering the default frame buffer size that's pegged with their GPU SKUs).

Unsurprisingly, none of these cards fare very well once you go beyond a 2,560 x 1,600-pixel resolution, but it’s worth noting that the GeForce GTX 1050 Ti turned out rather playable frame rates at the 1600p resolution. NVIDIA doesn’t intend for you to push beyond 1080p with this card, but it looks like there is still some breathing room to play with (assuming you’re willing to settle for less than 60fps of course). 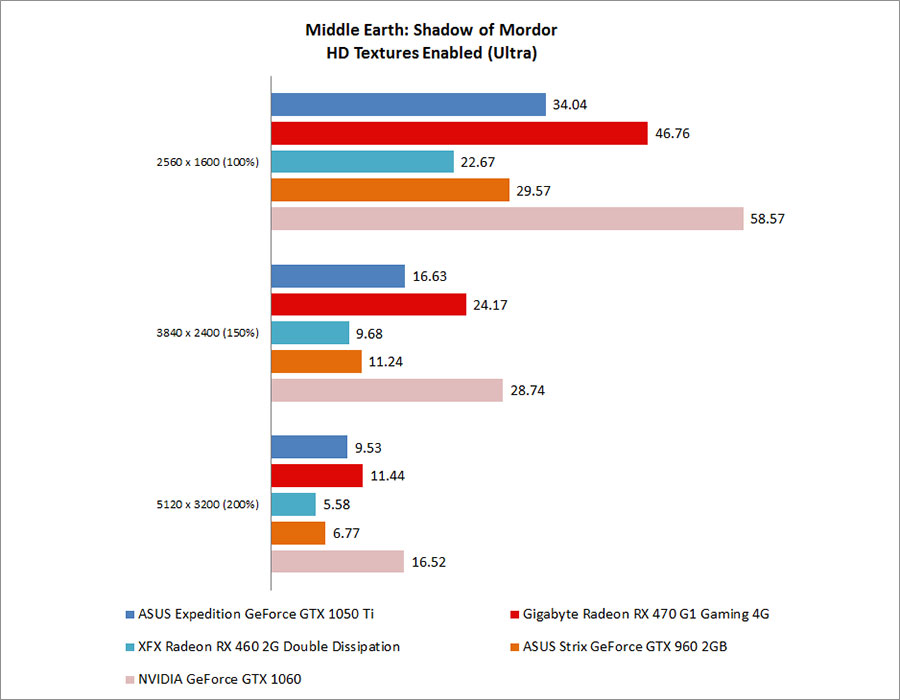 Crysis 3 proved quite trying for the GeForce GTX 1050 Ti as well, although we have to point out that we’re running our benchmarks with the settings maxed out, which isn’t quite how NVIDIA intended for the card to be used.

As we cranked the resolution and anti-aliasing settings up, the GeForce GTX 1050 Ti once again overtook the GeForce GTX 960 2GB, no doubt due to the advantage it had over it in terms of available memory. It also handily beat out the Radeon RX 460 by around 31 per cent, a decent amount considering that it is only about US$40 more expensive.

However, it was once again nowhere close to the Radeon RX 470 or GeForce GTX 1060. 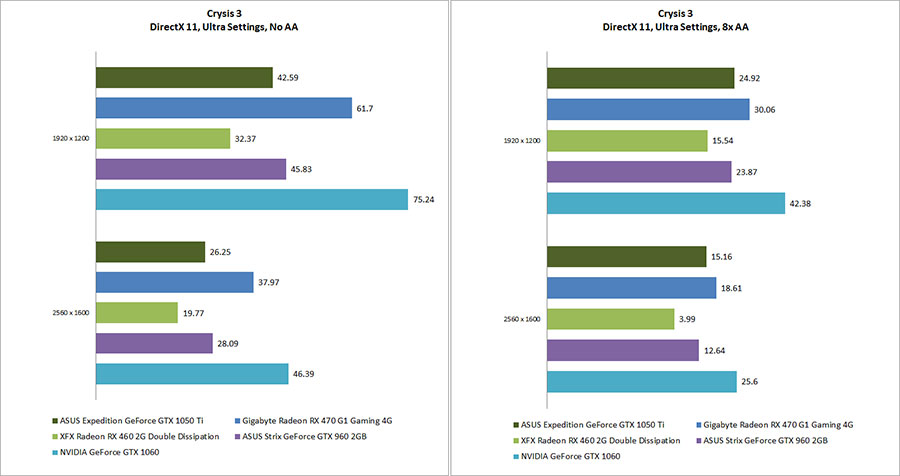 The Division turned up few surprises, with the results closely mirroring what we observed in the previous few benchmarks. The Radeon RX 470 was a whopping 60 per cent faster, clearly showing that you’re going to net quite a big performance boost if you decide to pony up some extra cash.

All the results do is reiterate the limitations, and also the strengths, of the GeForce GTX 1050 Ti. At US$139, you shouldn’t be expecting miracles from the card even it is based on NVIDIA’s excellent Pascal architecture. This means no cranking up the settings or venturing beyond 1080p, but what you’ll also get is pretty decent performance if you don’t try to be too adventurous. 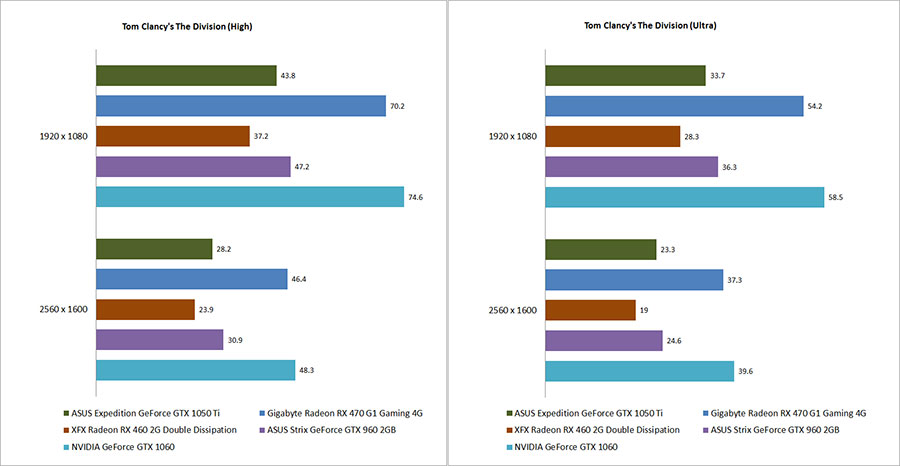