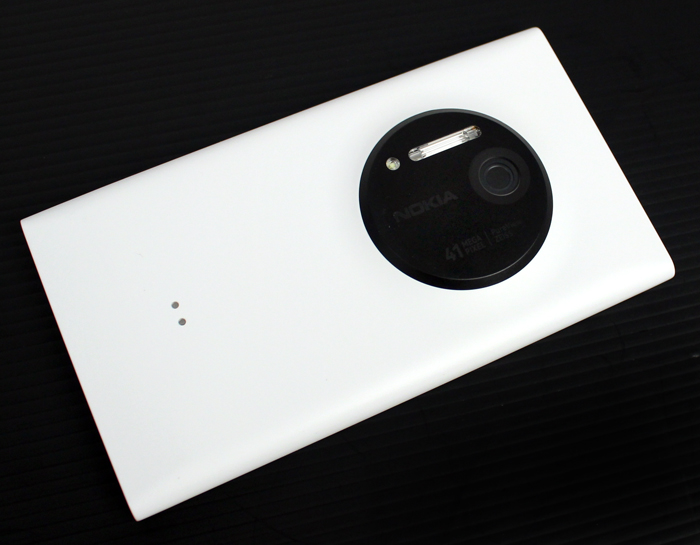 Of course, the star attraction of the Lumia 1020 is its 41-megapixel PureView rear camera. Turn the phone over and you'll immediately notice its huge camera bump, consisting of a circular, black aluminum module protruding from the rear, with a Carl Zeiss lens on the right and two flashes - an LED for video and focus assist, and a Xenon for still photos - above it. While the integration isn't exactly elegant, the module is still thinner, and looks much better, than the clunky 808 PureView's oblong camera module. The module is a bit more stealthy on the black finish, but you might like the contrast on the white and yellow finishes.

The 1020 camera has also received a few upgrades in other areas, with an improved six-element lens array (compared to the 808's five), consisting of five plastic lenses and one glass lens, and a slightly wider aperture of f/2.2 (compared to f/2.4 on the 808). The 1020 also includes a gyroscope for barrel-shift optical image stabilization to reduce image blur from shakiness. Best of all, you no longer have to choose between Full Resolution and PureView modes, as the 1020 will now take both simultaneously, saving both a high-res 38MP (34MP in 16:9 widescreen ratio) photo and an oversampled 5MP shot.

For a full walkthrough on how Nokia's PureView technology works, check out our PureView feature, but essentially what the camera does is capture data at 38MP (or 34MP), and then down-samples or pixel-bins the image to 5MP. It does this by combining the information from several pixels to create a single pixel, in the case of 38MP to 5MP, seven pixels are combined into one. This technique retains image detail but reduces image noise, and also allows for lossless digital zoom.

If you're wondering why Nokia advertises the 1020 camera as 41-megapixel when it only takes up to 38-megapixel shots, it's because, while the sensor is square, the lens itself is round, so the corners don't receive any light. It's a bit misleading for Nokia to advertise like this, but technically they're not wrong to do so.

If shooting with the Lumia 1020 doesn't feel solid enough, Nokia also sells an optional Camera Grip for US$79 that adds a more robust shutter button, a grip, a tripod mount, and even a secondary battery! Unfortunately we weren't able to get our hands on one for this review, so we can't comment more on it. 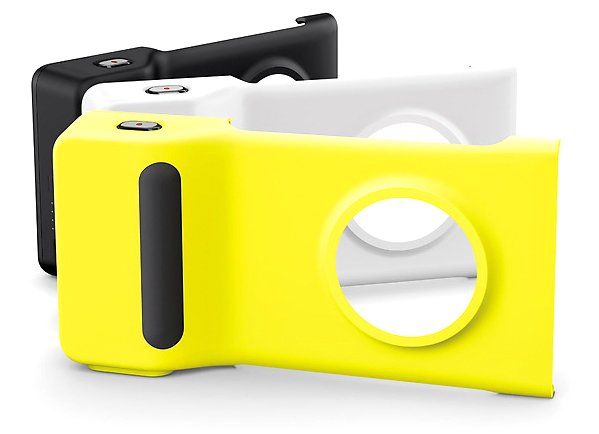 The stock Windows Phone camera application is pretty lacking. In fact, it's limited to just 5MP images, regardless of what settings or aspect ratio you choose. To improve things, Nokia has bundled the 1020 with its new Nokia Pro Cam application, which gives you a huge amount of settings to tweak and customize to your heart's content. Simply drag the onscreen shutter button to the left and a series of curved sliders will pop out, each representing a different adjustment setting: Exposure Value (-3.0 to +3.0), Shutter Speed (1/16,000 to 4 seconds), ISO (100 to 3200), Focus (drag the slider up and down to manually adjust focal length), and White Balance settings. Changing the settings instantly changes the image on screen so you can see what your photo will look like. Conspicuously absent from that list of settings is f-stop. We have no idea why it's missing, but hopefully Nokia will add that functionality in the future.

You can switch from Stills to Video mode by swiping down on the shutter button. In Video mode, there's a similar setup, but you only get sliders for White Balance and Focus. 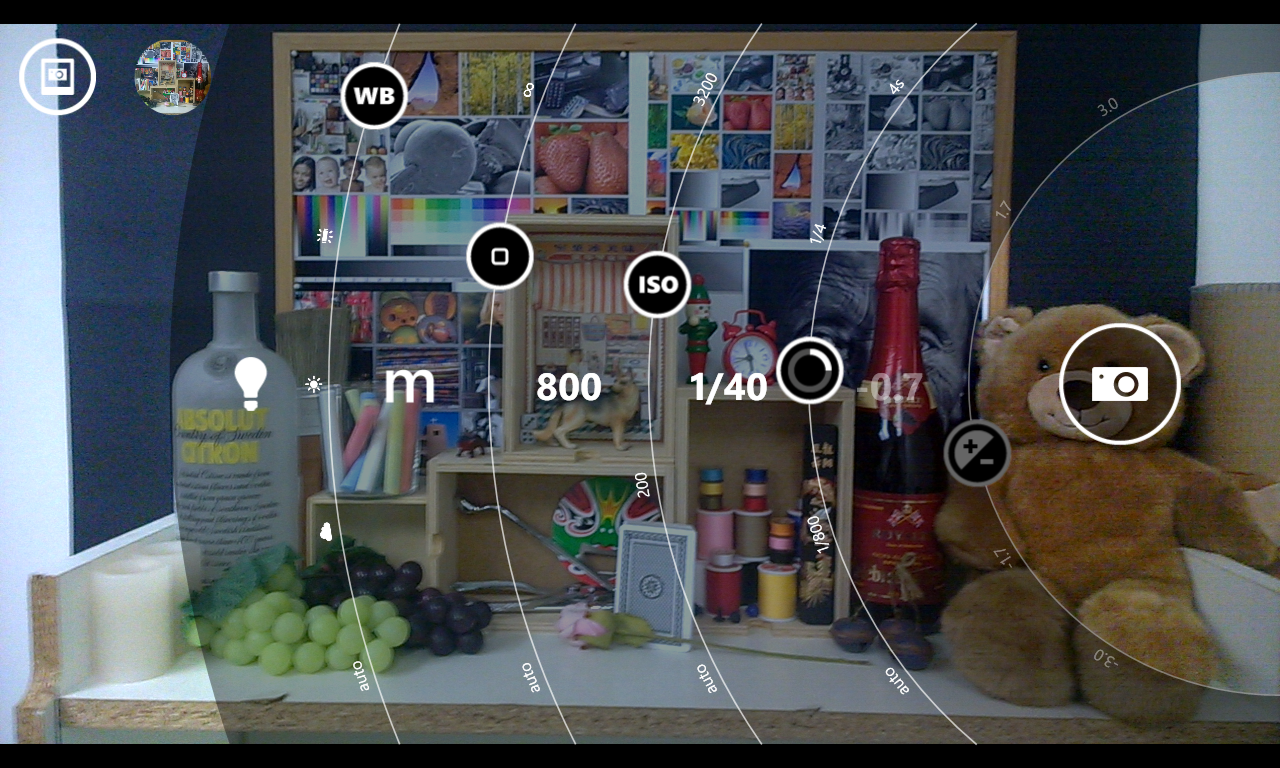 Other settings such as shutter delay, framing gridlines, aspect ratio, face detect and capture mode (for when you don't want 38MP shots clogging up your storage space) can be found by pressing the three dots in the top-right corner of the screen.

You can also switch to other camera apps by pressing the arrow icon in the bottom-right corner. Here you'll find Cinemagraph, Panorama, Nokia Smart Cam and the tastefully-named "Bing Vision" (a QR code scanner). 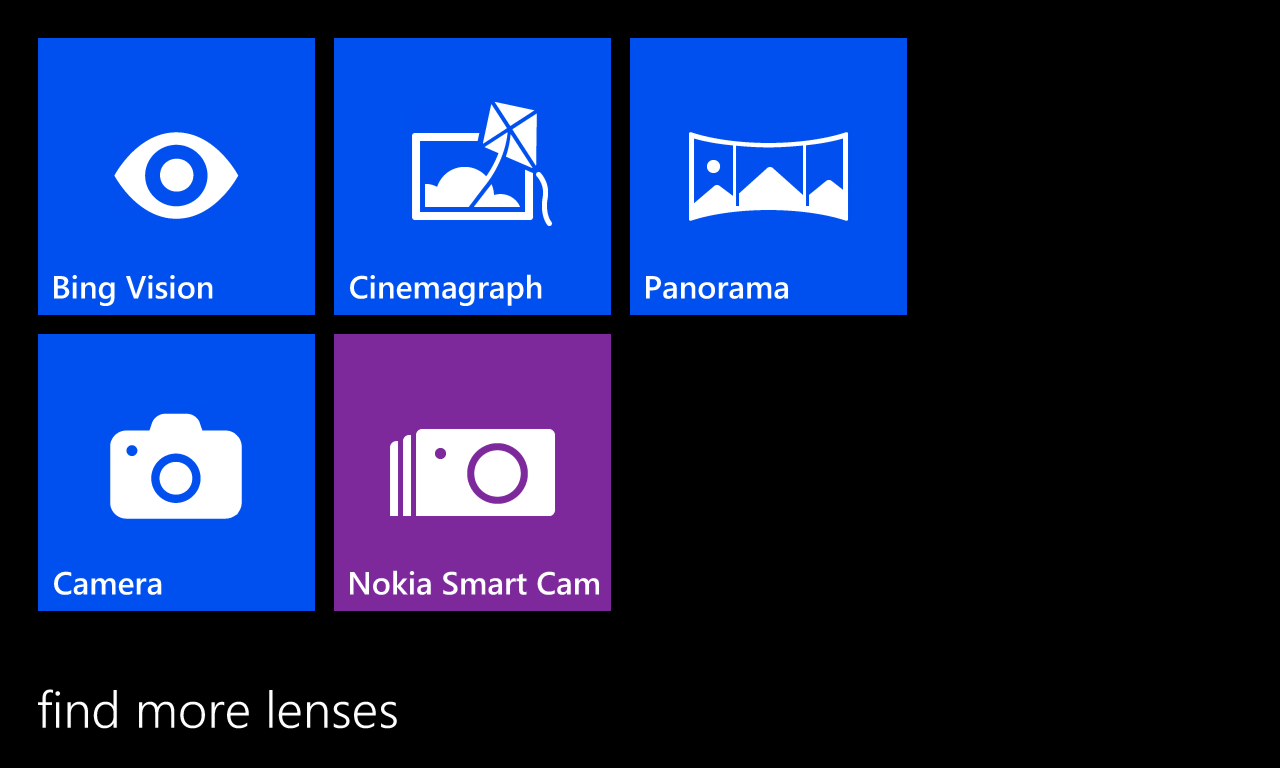 A quick word on Nokia Smart Cam, which we first saw on the Lumia 925. Smart Cam doesn't have the customization of Pro Cam, but it does have its uses, as it will take a burst of ten shots, letting you choose the best one. You can also use it to apply other creative effects, such as creating action shot motion composites, and removing pesky photobombers.

Like the 925, the Lumia 1020 also includes Nokia's Creative Studio app that offers some basic Photoshop-like image manipulation, including rotation, cropping and straightening, color and hue manipulation, and options for making collages. As expected, image quality on the Lumia 1020 is top notch and far exceeds every other smartphone camera. If you're not inclined to toy around with the manual settings, leaving everything on auto works just fine and, for the most part, the camera picks the right settings for the job. One problem we did encounter was some noticeable lag in between shots. It's most apparent in Pro Cam mode with 5MP + 38MP shooting selected, but also occurs even with just 5MP selected. It's not a deal breaker and is likely something Nokia can fix with a software update, but it can be frustrating, and we did miss a few shots because of it. We also felt that the auto-focus, while accurate, could have been a bit snappier, especially in lower light conditions.

Macro shots were not fantastic, as the 1020 has a minimum focal distance of 15cm, which is actually quite long. However, macro capabilities were not really needed due to the high MP count and the PureView's lossless zoom capabilities.

Compared to the 808 PureView, image performance seems about equal, if not better (possibly due to the added image stabilization).

N.B. When shooting with the Lumia 1020, we highly recommend adjusting the Lumia Color Profile to a more neutral color saturation, otherwise the vivid colors of the default setting make it nearly impossible to judge what your pictures will look like when uploaded or transferred to another display.

First, let's take a look at the 5MP PureView image: 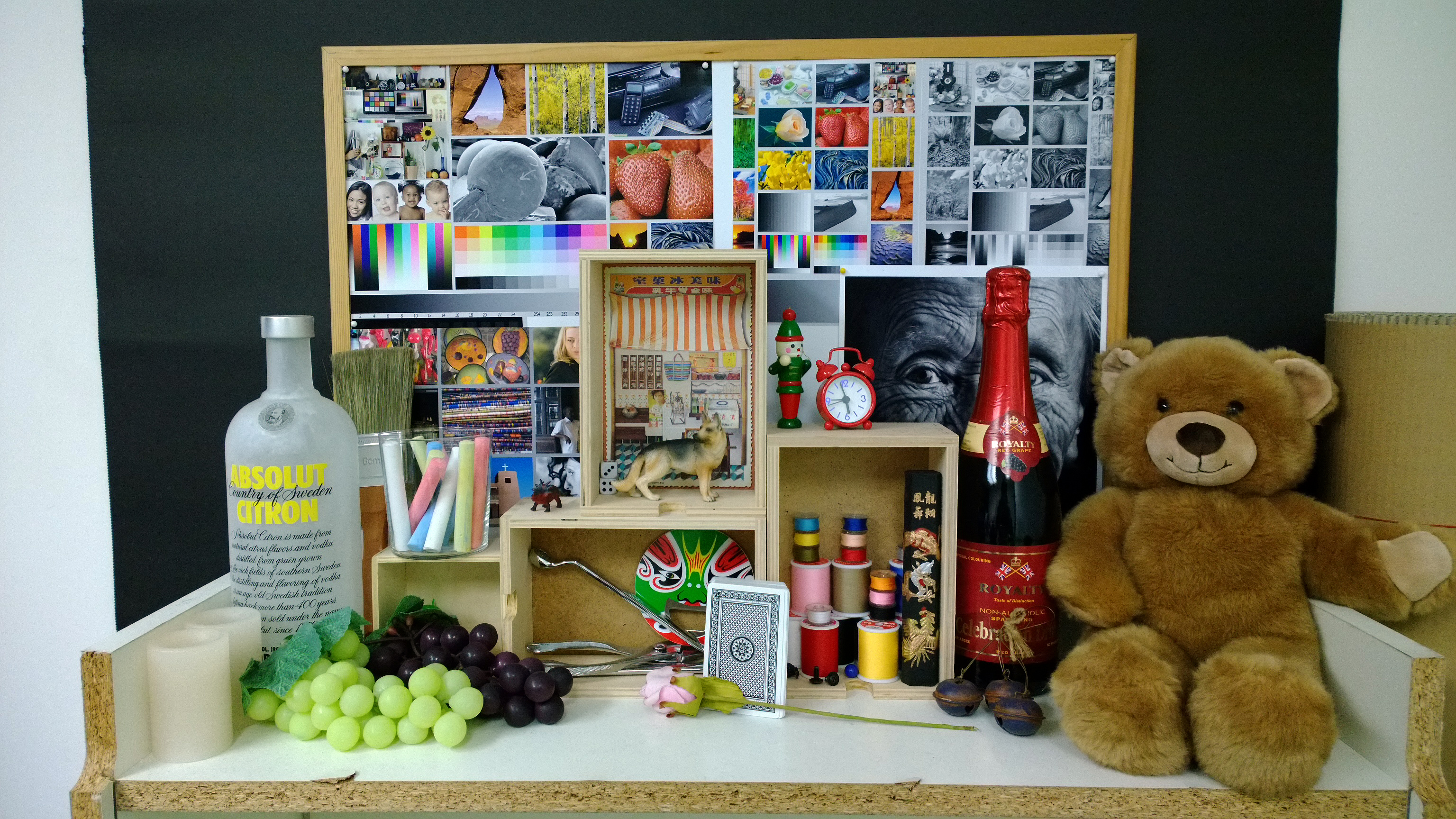 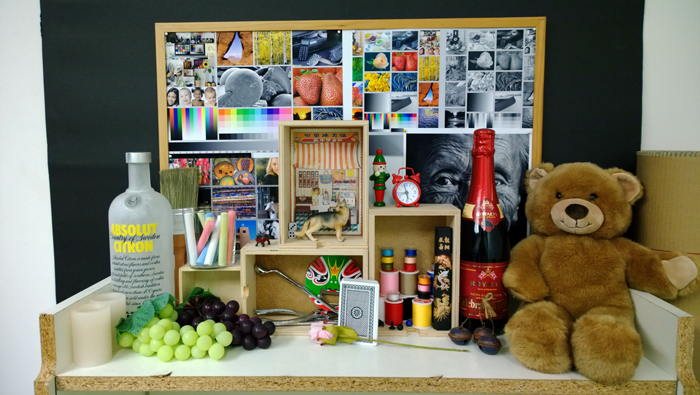 If you're concerned about the 1020's lack of expandable storage, 5MP images average about 2MB, while high-res 38MP images average about 15MB, although busy images with lots of detail (like our test shot) can be as large as 23MB. While that still leaves plenty of room for photos on the 1020's 32GB internal storage, we have to question again why Nokia didn't include a MicroSD card slot on the 1020 when other Windows Phone 8 devices like the relatively low-end HTC Windows Phone 8S does have one?

The following are sample photographs shot with the Nokia Lumia 1020. All photos were shot using the Nokia Pro Cam app. The photos have not been post-processed and are copyright to SPH Magazines. They are provided for your reference only and we ask that you do not reproduce them elsewhere. Click for full-resolution images. 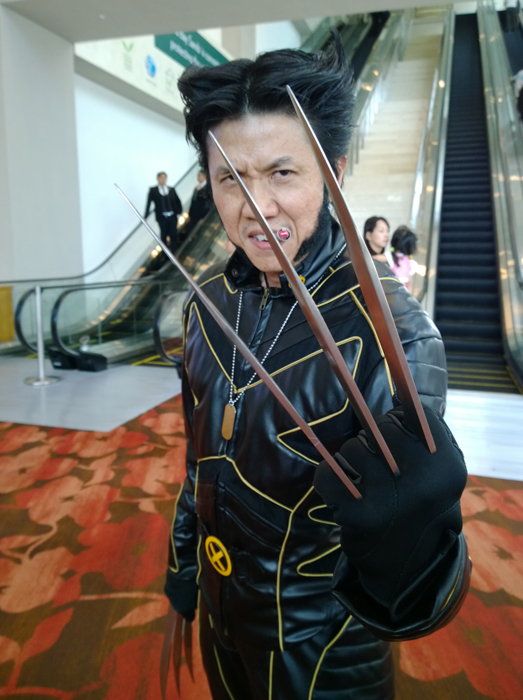 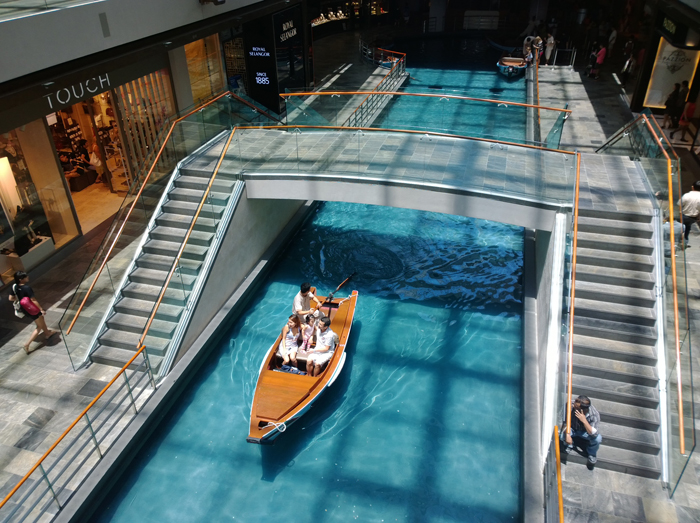