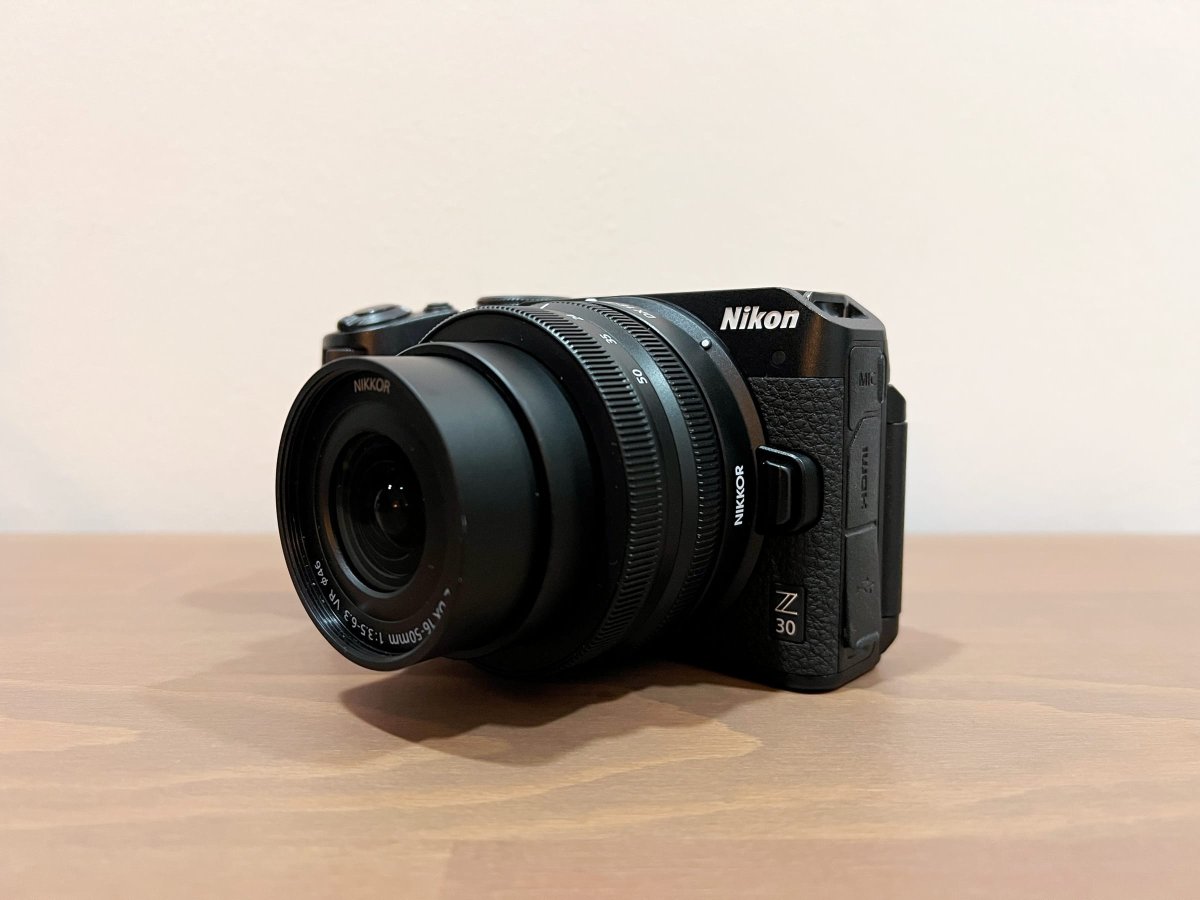 With the compact camera market essentially dead due to smartphone cameras, traditional camera makers are switching up their game plan, targeting the likes of video bloggers, live streamers and content creators. As a result, the Nikon Z 30 interchangeable-lens mirrorless camera was born.

The Z 30 shares many similarities with its older brother, the  Z 50, with a 21-megapixel APS-C (or DX-format) image sensor, 4K video shooting up to 30 frames per second (fps) and 11fps stills.

However, it loses some features deemed unnecessary for this target group of users, such as the electronic viewfinder (EVF). Instead, the Z 30 gains a fully-articulated touchscreen LCD. This 3-inch 1.04-million-dot display can be flipped out to one side and rotated 180 degrees to face the front. Something content creators will no doubt prefer. 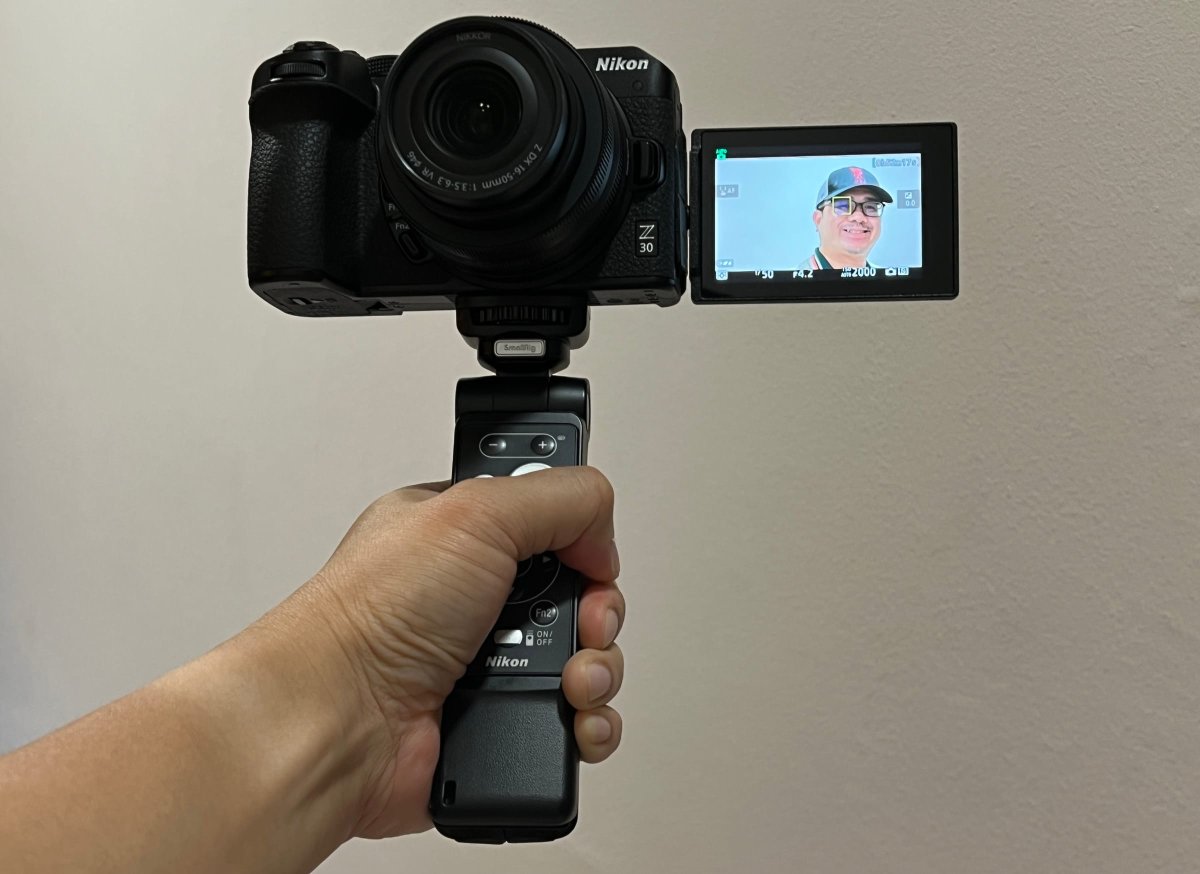 And to ensure content creators' faces are always in sharp focus during video recording, the Z 30 comes with full autofocusing (AF), which automatically chooses the AF point, and eye-detection AF.

In other words, video bloggers and content creators looking to upgrade from their smartphones to mirrorless cameras, for better image quality, faster AF and the flexibility of changing lenses, can look at the Z 30.

In truth, if you look at the specifications of Z 30 closely, they closely mirror that of Sony's content-creator-centric ZV-E10 released last year. While this review is not a direct comparison, we will touch a bit on its similarities and differences with ZV-E10 along the way.

Nikon also sent us the Nikon ML-L7 Remote (S$45) with a Smallrig Tripod (S$45, exclusive at Nikon Experience Hub in Funan), which we used a lot during this review. 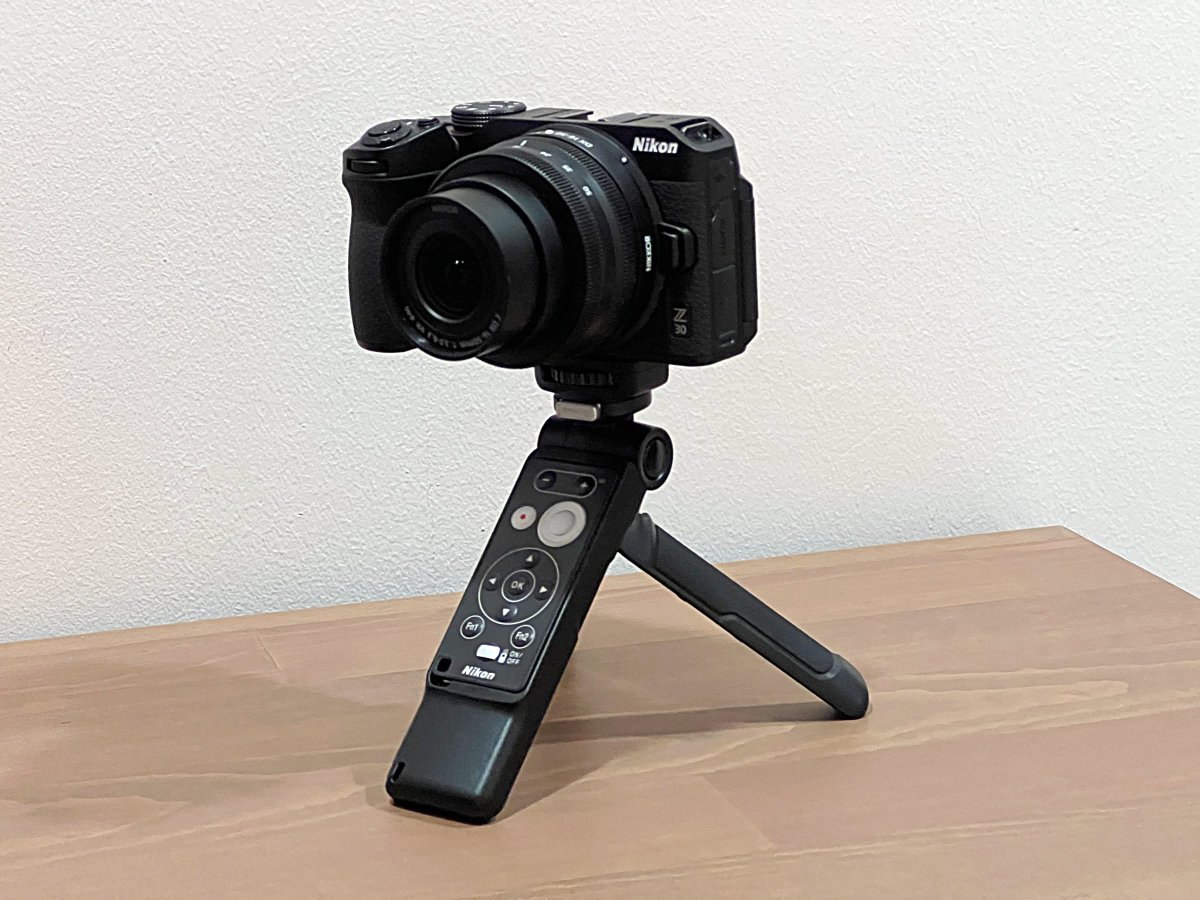 In terms of design, the Z 30 looks pretty much like any conventional mirrorless camera, apart from the lack of an EVF. It has Nikon's design ethos through and through.

In other words, you get the shooting mode dial, a large video-recording button and a command dial on the top right of the camera. At its rear, there is the four-way directional/OK combo button where your thumb will rest while holding the camera. 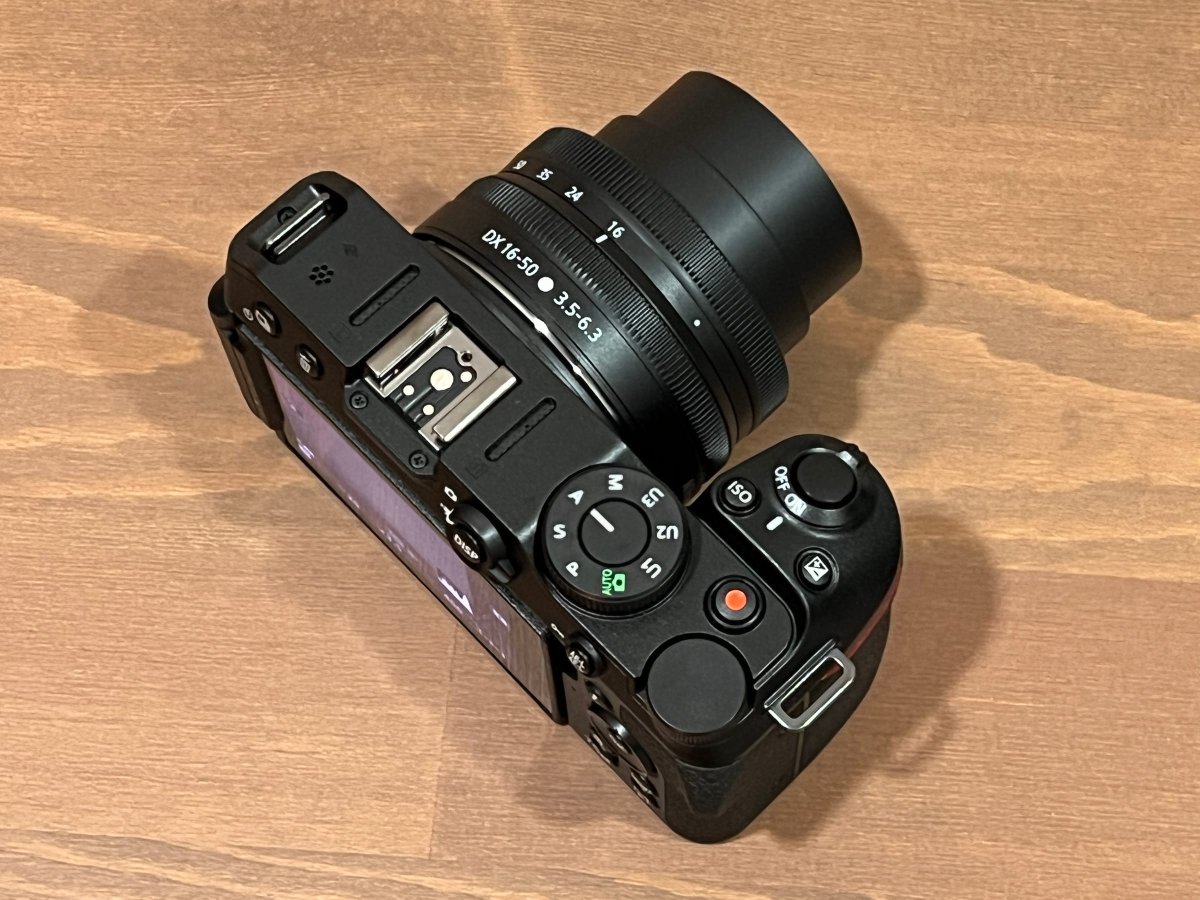 The left side of the camera houses a microphone-in audio port, a micro-HDMI port and a USB-C power delivery port protected by rubber flaps. There are dedicated buttons for ISO and exposure compensation sited just behind the shutter release button, which is situated on top of the rubberised grip. 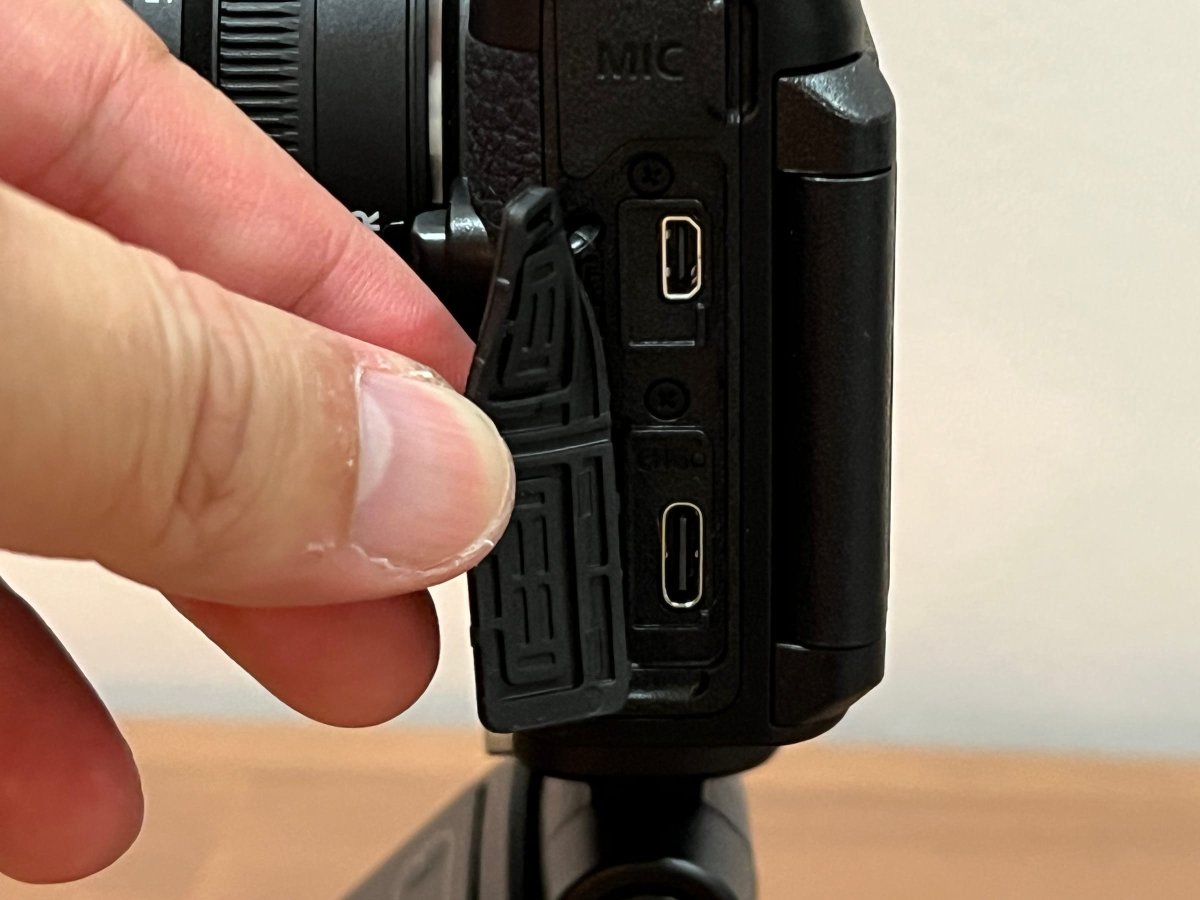 There are two built-in microphones sitting on both sides of the hot shoe for supposedly better voice recording. You can put an official third-party deadcat windscreen on these microphones, but you lose the hot shoe.

This well-thought button layout might delight long-time Nikon users, but we suspect the multitude of buttons might confuse beginners.

By comparison, the Sony ZV-E10 does not have a Mode dial. Instead, it just has a single button for users to toggle through Still mode, Video mode and S&Q (high speed video) mode. This might be easier for beginners, instead of wondering what ‘A’ and ‘S’ on the Mode dial means.

But beginners and veterans alike will have no complaints about the solid grip. It has been ergonomically sculpted to ensure a nice and firm grasp of the camera, even when used reverse for selfies.

For those with bigger palms, the grip might not be large enough to accommodate all your fingers. However, it should still be comfortable to hold with one hand due to its light weight (350g, body only). 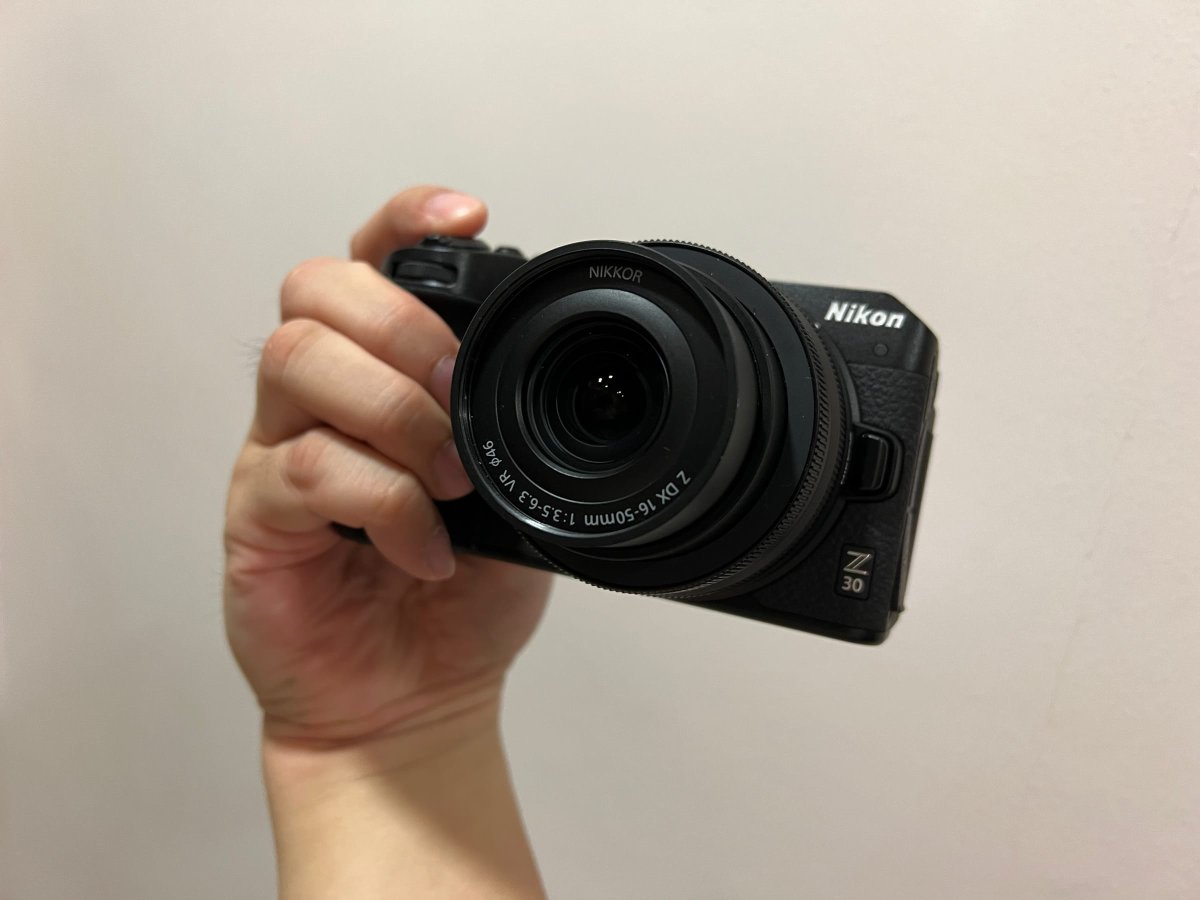 Not to mention, the Z 16-50mm VR lens does not weigh much either and offers a great counterbalance to the body. As such, anyone can easily hold the camera with one hand even if you are doing selfie videos.

Talking about selfies, the Z 30 will automatically switch to portrait mode when rotating the monitor to face the front. This portrait mode will enable a 2-second timer, so you have time to get ready for the selfie shot. You can also select its 10-second timer and take up to 9 continuous selfies if desired.

In addition, a video-recording indicator light - located below the front Nikon logo and beside the flipped-out display - will light up when video recording is in progress. This is something that the Sony ZV-E10 has too.

On the downside, we missed the EVF. The display is just not bright enough during bright sunlight. For instance, we were at the National Day Parade Preview and struggled to point the Z 30 at the sky to photograph the Red Lions parachute team using its display. An EVF would have been really useful in this situation.

But on the bright side, Z 30's touchscreen display is super responsive like a smartphone display. You can easily tap on the menu and get to the options you want. You can also tap on the LCD to focus on a point and take a photo.

It also lets you pinch to zoom in on a picture you have taken, when most cameras only allow you to do so by pressing Zoom in/out buttons. You can also swipe left or right to browse through the photos you shot.

However, the Sony ZV-E10 has an upper hand with its zoom lever and power zoom lens. This is something sorely lacking in the Z 30. With Z 30, you have to turn the lens zoom ring while videoing yourself thereby increasing the chance of blocking your face. But with the ZV-E10, you can do so with the zoom lever.

Write a Review
Compare This | Specifications
Good for vlogging
Excellent still images
Superb video quality
Super responsive touchscreen display
No headphone output
No in-body image stabilisation
No electronic viewfinder
Our articles may contain affiliate links. If you buy through these links, we may earn a small commission.
Sponsored Links