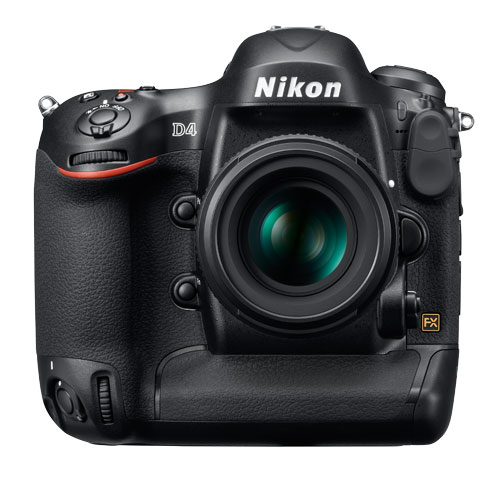 It's wildly exciting to hold and use one of the best DSLR cameras in the world. The D4 is Nikon's latest flagship, the fastest camera in Nikon's stable and the one with the best ability to see in the dark. This camera is tough, weather-sealed, and will be able to go anywhere with you and shoot anything you aim it at. Before we go on with the review however, let's do a quick recap on what's new.

The D-series is Nikon’s flagship series of professional DSLR cameras. When it was released in 2007, the Nikon D3 changed the landscape of digital photography with its remarkable ability to shoot at high ISO levels and produce low noise images. The D3S upped the game even further in 2009, becoming the camera that many said "could see in the dark". So it's understandable to see expectations riding high on the D4, the next generation camera in Nikon's D-series of low-light champions.

The D4 is designed specifically for sports, news, wildlife and event photographers who need to shoot in low-light and at fast speeds. It presents an evolutionary, rather than revolutionary step forward from the D3S. Image resolution has been increased to 16MP from 12MP, frame-rate has been slightly increased from nine frames per second to ten (with continuous AF/AE). If AF/AE is locked to the first frame, the D4 can shoot up to eleven frames per second.

A new 91K-pixel RGB sensor is able to recognize human faces even when images are framed using the optical viewfinder, and also promises to bring improvements to AF, AE, i-TTL flash control and auto white balance accuracy. The AF has also been improved with the ability to detect and target focus on human faces, and the new 3D color matrix metering III system will determine exposure considering faces. In addition, 11 focus points are fully functional when lenses with a maximum aperture of f/8 are used. The AF's ability to focus in the dark has also been increased and is now sensitive to -2EV.

The biggest changes are in the D4's video shooting capabilities. From 720p video on the D3S, the D4 now shoots Full-HD 1080p at 30/25/24p frame-rates in H.264/MPEG-4 AVC format at up to 24Mbps. Faster 60/50p frame-rates are available at 1280 x 720. Sound capture has also been enhanced with a built-in stereo microphone connector, as well as an external headphone connector to monitor audio recording, and microphone sensitivity can be controlled in 20 incremental steps. Professionals can also stream uncompressed video and audio signals out of the camera via HDMI to an external monitor or recording device.

Write a Review
Compare This | Specifications
Low noise at ultra-high ISOs
Fast frame-rates for action
Fast and accurate auto-focus
Improved handling and comfortable grip
ISO performance only slightly cleaner than D3S
XQD card-slot forces users to upgrade
Our articles may contain affiliate links. If you buy through these links, we may earn a small commission.