ASUS impressed us with the 5-inch version of its eccentric phone-in-tablet PadFone Infinity device when it launched earlier this year. Less than six months later, the Taiwanese company is releasing a new and improved version with an updated Qualcomm Snapdragon 800 processor, improved camera software, and expandable memory via a microSD card slot. The new PadFone Infinity also sports new diamond cut chamfered edges and will be available in two colors: Platinum White and Titanium Black.

Due to the new expandable storage option, the 64GB internal storage configuration has been removed, and a new 16GB option is now available.

And here's how it compares to the rest of the family: 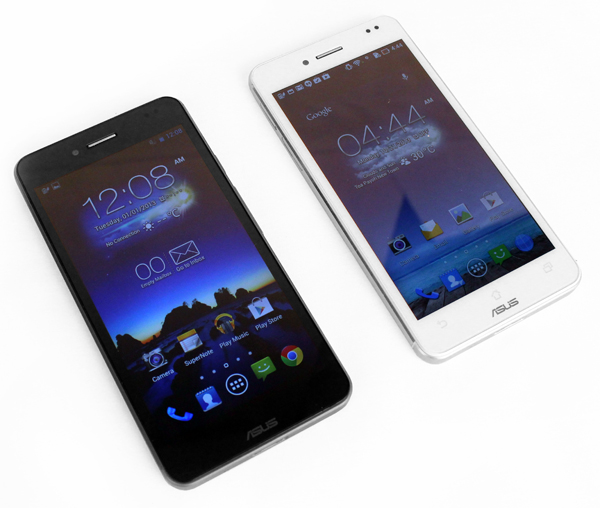 Design-wise, not much has changed with the new PadFone Infinity. The rear back edges of the aluminum unibody frame now sport 'diamond cut' chamfered edges, which look nice and make the phone a bit more comfortable to hold - although it's still not the best handler out there, and it's certainly not as sleek as some of its competitors.

While we liked the PadFone Infinity's design six months ago, with so many newer models hitting the market, it's looking a bit dated now, and the screen bezel in particular, looks rather fat - it's particularly noticeable on the new Platinum White color.

The back of the white model sports a smooth sandblasted aluminum back, which both looks and feels very similar to an Apple MacBook. As mentioned above, the new PadFone Infinity also sports a microSD card slot located below the nano-SIM card tray. The tablet dock remains the same as the old PadFone Infinity. 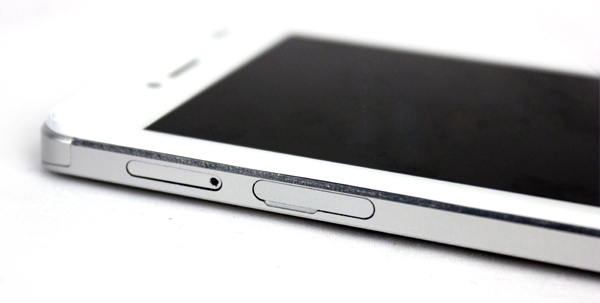 Apart from these changes, not a whole lot has changed and the optional PadFone Infinity Station still remains the same as the last iteration. For a full breakdown of the PadFone Infinity's design and features, please refer to our earlier review.

The new PadFone Infinity is running Android 4.2.2. Jellybean, which includes some tweaks from ASUS. Compared to the old PadFone Infinity, icons and menus look cleaner and simplified, and a few apps like the calendar and gallery have been given a fresh new look too. 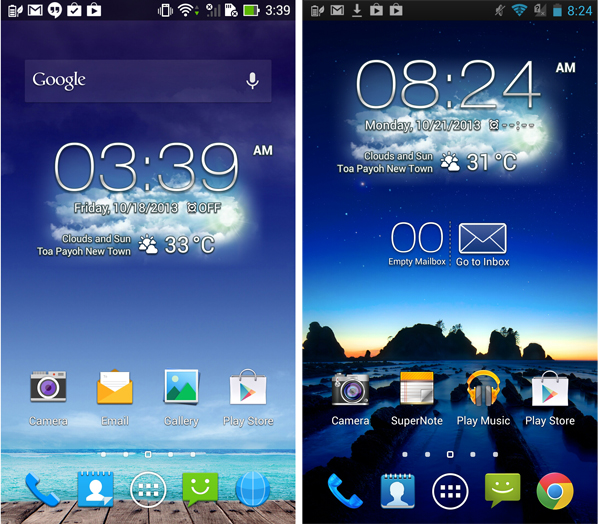 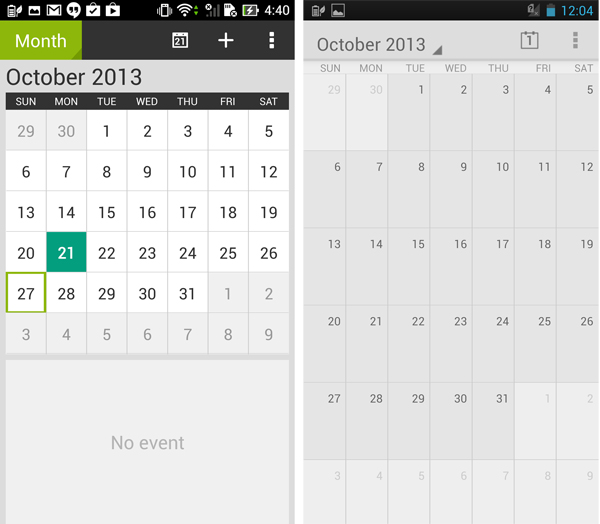 While the new PadFone Infinity utilizes the same 13MP, f/2.0 shooter found in the old PadFone Infinity, ASUS has updated the camera software which now comes with a whopping nine different camera modes in total: 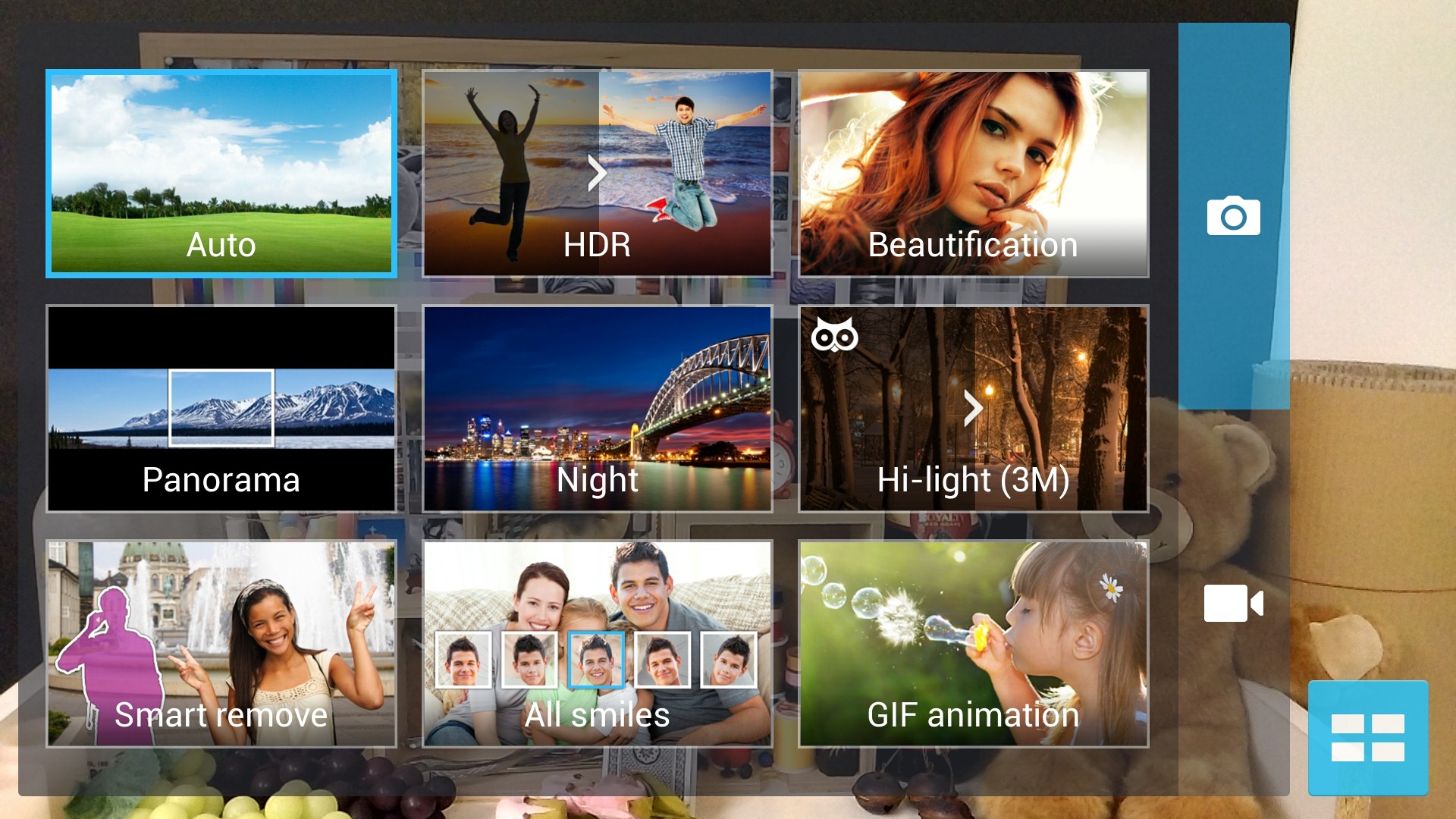 The most interesting of these is Hi-Light Mode, which uses ASUS' PixelMaster technology, which combines pixels from a 13MP image into a 3MP image (similar to Nokia's PureView technology), and should result in less noise and more overall detail.

A new 'turbo' burst setting is also included, that shoots up to 100 continuous frames at 12fps. 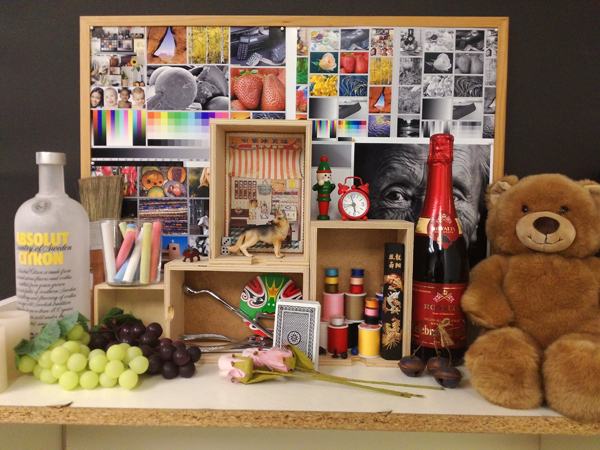 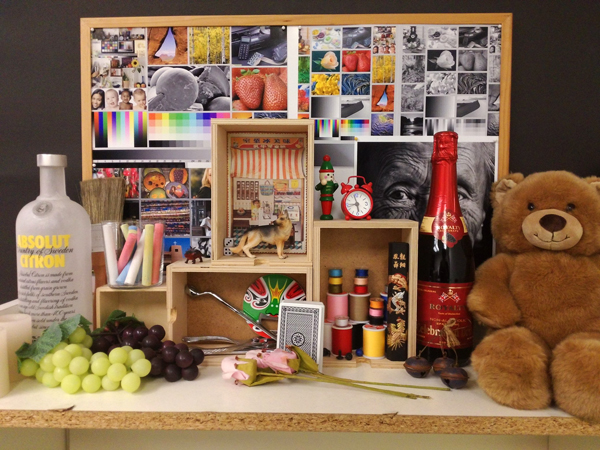 The new PadFone Infinity is armed with the latest Qualcomm Snapdragon 800 processor, which puts it on par with other 5-inch flagship smartphones like Sony's Xperia Z1 and LG's G2.

The new PadFone Infinity maxed out the score on Ice Storm so we will be looking at its scores for Ice Storm Extreme and Unlimited.

The new PadFone Infinity was again impressive, outscoring the LG G2 and keeping pace with the Sony Xperia Z1 at both Extreme and Unlimited. 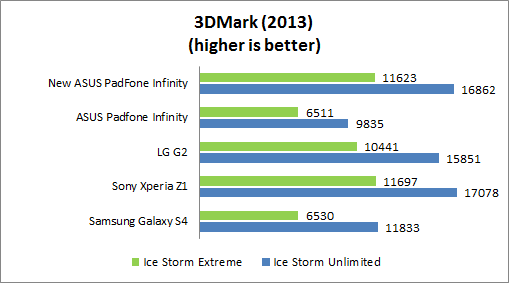 The new PadFone Infinity scored excellently on this benchmark, which was backed up by our own usage with the device, where both web browsing and UI navigation were fast and responsive.

Having said that, we didn't notice any difference between the old and new models in actual day-to-day usage, with both PadFone Infinitys easily lasting through the day with about 15-20 percent left at midnight.

The new PadFone Infinity adds a few nice upgrades to an already decent device, but overall, it doesn't offer enough over the existing PadFone Infinity. The addition of a microSD card slot fixes one of the negative points we raised with the previous model, but the diamond cut chamfered edges - while a step in the right direction - don't do enough to address the handling issues we noted in our original review.

The original 32GB PadFone Infinity retailed for S$898, which is now what you'll be paying for the new lower capacity 16GB version. Meanwhile, the original PadFone Infinity has dropped as low as S$798. The new 32GB configuration will retail for an extra $100 more at S$998, which seems a little steep to us for, what is for all intents and purposes, just a more powerful version of a six month old device.

While the performance increase is significant, there are a number of Android smartphones offering the same level of performance - and many of them are newer with sleeker designs and more features as well (e.g. the LG G2). Of course, the key feature for the PadFone Infinity is its ability to morph into a tablet with its accessory PadFone Station, thus bringing along everything that you've been using on the phone into a larger screen. The overall handling might not be as good as some of the newer premium standalone tablets, but if you're a light user of such devices, adding S$328 for the accessory might be a decent option. There are plus points and negative points to this concept, but it's the only option in the market that functions in this manner. Last but not least, the PadFone Infinity is the only other premium smartphone (besides HTC) to offer an aluminum frame body (but it doesn't help uplift its dated design).

All things considered, if you're already a PadFone Infinity user, there's absolutely no reason to upgrade (especially if you have the 64GB configuration). As for prospective buyers on the fence about purchasing a PadFone Infinity, the new version offers much better performance (at the cost of slightly reduced battery life) but not much else. So if you're a light user, it might be worth looking for a good deal on an older 64GB first generation PadFone Infinity instead.

Write a Review
Compare This | Specifications
Excellent performance
Expandable storage
Optional PadFone Station accessory for tablet conversion
Slightly worse battery life
Almost exactly the same as original PadFone Infinity
Handling still not as good as competition
16GB configuration costs the same as the previous 32GB edition
Our articles may contain affiliate links. If you buy through these links, we may earn a small commission.
Sponsored Links