The Next Generation of WiFi

There is an old saying that says that numbers don’t lie. Oh, but they do. Let us ask you this question: Which class of router is faster, AC-3200 or AC-2400? If you picked the former, chances are, you did not read our guide to Wireless 802.11ac networking.

As we explained, for those who want the absolute fastest wireless connection, AC-2400 routers are the way to go because they offer a maximum data transfer rate of 1733Mbps. AC-3200 routers, if you are wondering, offer a maximum of 1300Mbps, but they broadcast two separate 5GHz bands - hence the AC-3200 rating. However, we also talked about the current limitations of AC-2400 routers. The most glaring being that there is currently no device in the market that has a compatible chipset to take advantage of all that speed. Still, if you want future proofing and the best in terms of sheer speed, AC-2400 routers are the way to go. 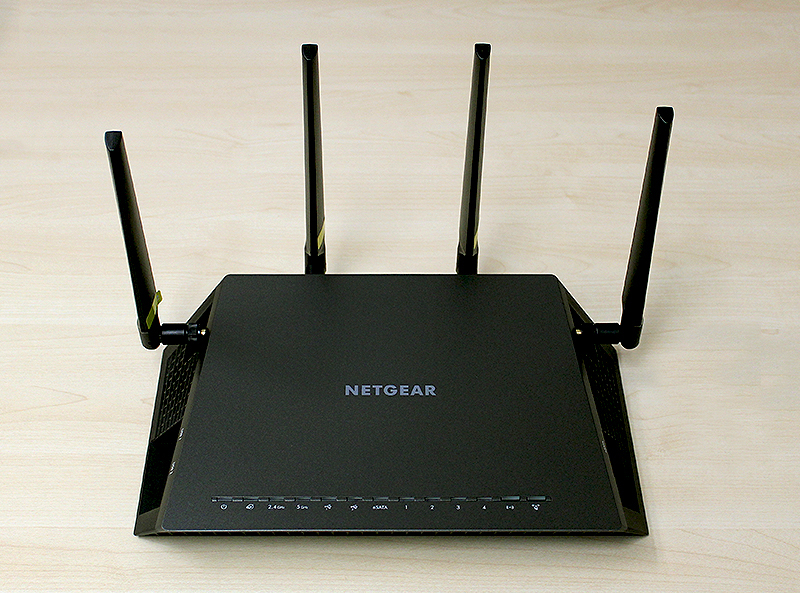 Not wanting to be left out of the game, the latest AC-2400 routers that we are looking at today come from Netgear, which has been steadily carving a reputation for making very fast routers. Its older AC-1900 Smart WiFi router (also known as the R7000) was highly acclaimed and well received, so let's see if its successor can fill those big shoes.

Along with ASUS, Netgear has been carving a reputation for delivering fast routers. Its last flagship Nighthawk router, the AC-1900 Smart WiFi router, was well received and offered a blend of great performance and features, and Netgear will be hoping to build on its success with the new Nighthawk X4 (also known as the R7500).

The Nighthawk X4 is Netgear’s first AC-2400 router and it shares a lot of the same components as its competitors in this class. Powering the router is Qualcomm’s dual-core IPQ8064 processor, which runs at 1.4GHz, and it uses Quantenna’s QSR1000 chipset on its 5GHz radio. The QSR1000 is the first chipset in the world to support four spatial stream, allowing the Nighthawk X4 to deliver a maximum data transfer rate of 1733Mbps on its 5GHz band. The 2.4GHz radio is powered by Qualcomm’s QCA9880 chipset. 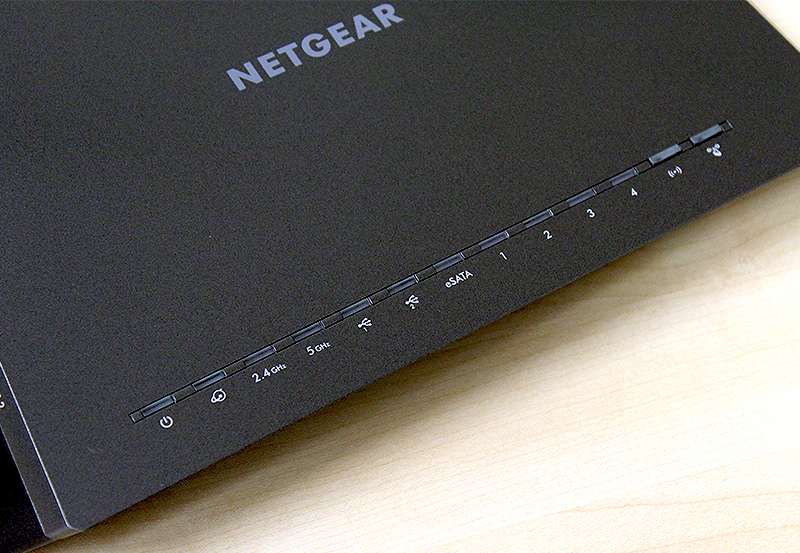 In terms of design, the new Nighthawk X4 looks very much like the older R7000. It retains its trapezoidal shape, which looks modern and is entirely befitting of its high-end positioning. However, it is also very large, and at three-quarters of a kilogram, also very heavy. In keeping with its upsized design cues, the Nighthawk X4 also has four extra-large external antennas that measure around 16cm long each. On the top panel is a row of LED indicators, which can be turned off if users find it too distracting, and also two buttons for WPS setup and to turn the Wi-Fi off. 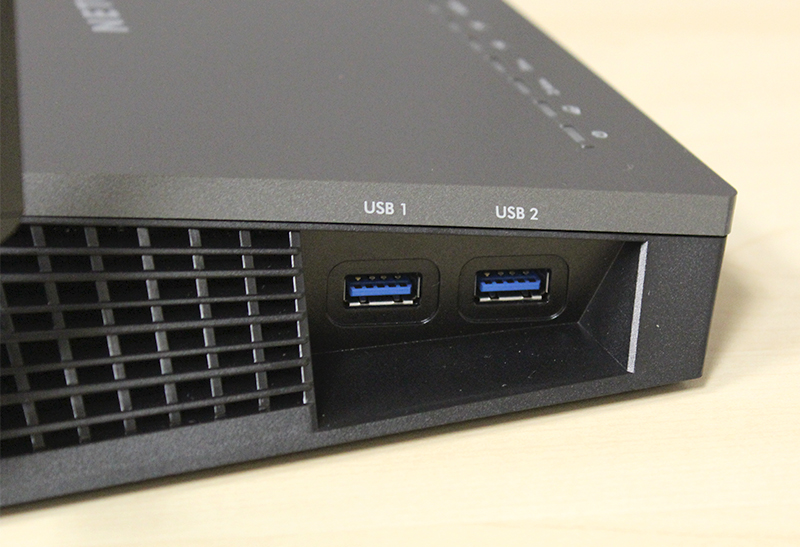 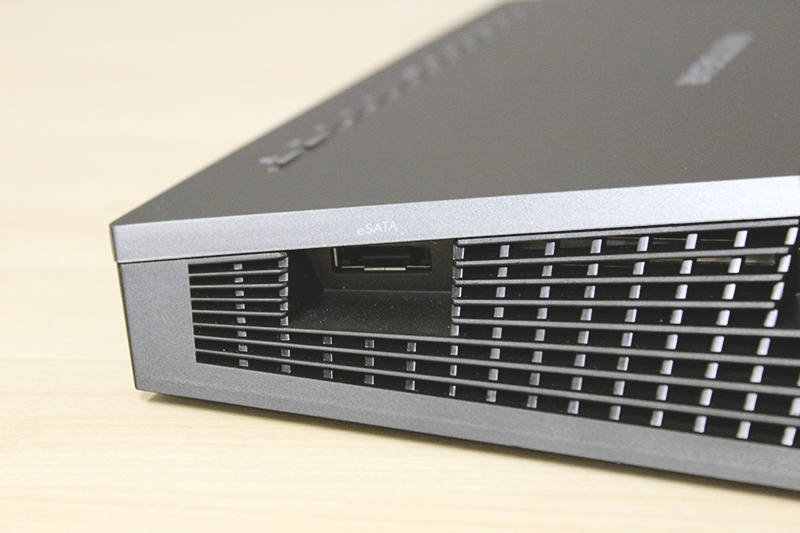 Behind, users will find the usual assortment of a single Gigabit WAN port and four Gigabit LAN ports. There’s also a switch to turn off the LED indicators, a power button and a reset button. The Nighthawk X4 also comes with two USB 3.0 ports and a single eSATA port for connecting external storage devices and printers, and these are located at the two sides. This is a first as most routers typically only have a single USB 3.0 port and another USB 2.0 port or a USB 2.0 and eSATA combo port. The positioning of these ports is both good and bad. On one hand, it is much more easier to access them; but on the other, connecting devices to these ports would break up the Nighthawk’s good looks. 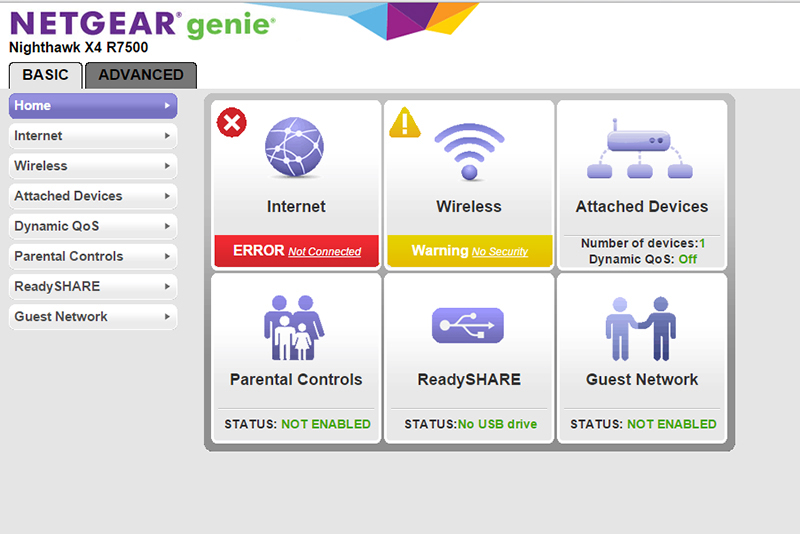 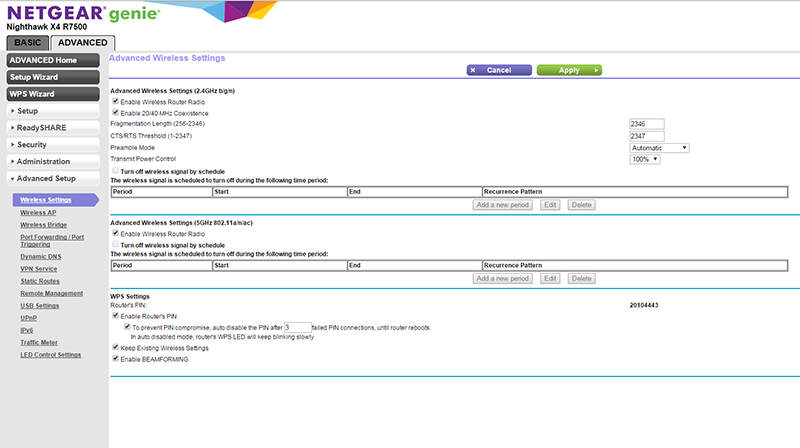 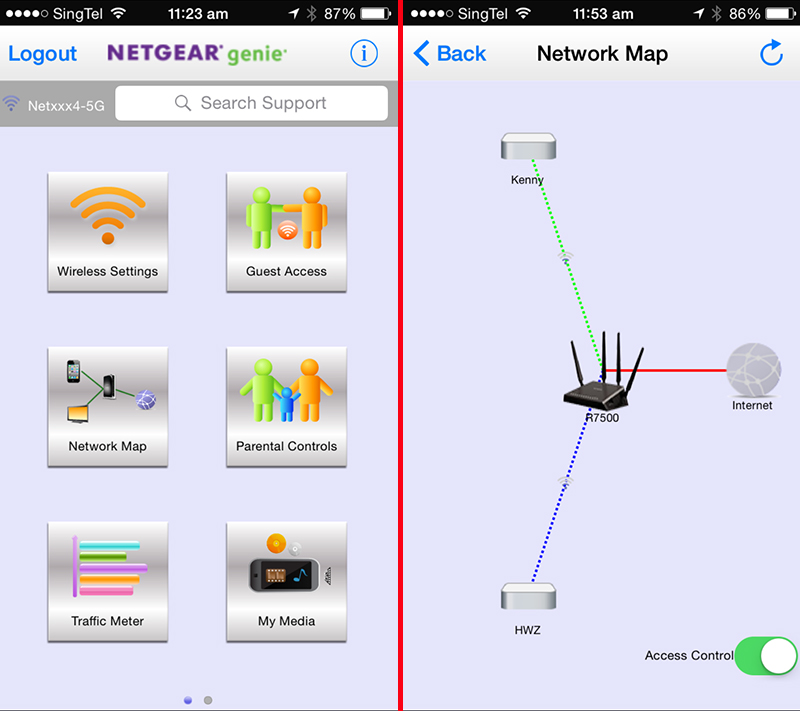 Setting up the Nighthawk X4 is easy as the router comes mostly preconfigured. A sticker on the router indicates its SSID and also its password. If you are not a fussy user, you could use it straight out of the box. There’s also a Genie app available for iOS and Android devices for free on their respective app stores. However, the app is limited in its use and it is missing some features that are found on the router’s web browser interface. For example, using the app we could only edit settings of the 2.4GHz band and not the 5GHz band. Also, advanced features such as port forwarding, dynamic DNS and VPN can only be accessed using the web browser and not the app. That said, the app is not entirely useless. It can be used as a quick way to check your network map and see what devices are connected to the router and it can also be used to monitor your traffic. The web browser interface is fairly straightforward to use and navigate and the router has all of the features that you would expect from a high-end router, including port forwarding, VPN support, advanced wireless settings and more. But despite the router's powerful hardware, we found setting it up to be a bit sluggish as compared to its rivals.

One interesting feature of the Nighthawk X4 is its QoS feature. Called Dynamic QoS, the Nighthawk X4 is able to recognize and differentiate between different applications and is able to prioritize them on the fly. For example, Netgear claims it is able to distinguish even between different video streaming services - those with adaptive bitrate and those without - and is able to allocate bandwidth accordingly to ensure the best video streaming experience. The reason Dynamic QoS is able to do so is because it keeps a database of applications which must be updated periodically to ensure the best performance. Fortunately users can setup the Nighthawk X4 to do so automatically.

Write a Review
Compare This | Specifications
Fast downlink performance
Consistent downlink performance across all ranges
Aesthetically pleasing
Two USB 3.0 ports and a single eSATA port
Bulky design, large antennas
Placement of USB ports could be better
Lackluster uplink performance
No compatible 4x4 devices or network adapters in the market now
Our articles may contain affiliate links. If you buy through these links, we may earn a small commission.
Sponsored Links