MSI Z77A-GD65 Gaming Motherboard - The March of the Dragoon Army

The information on this page is mostly from our preview article. For those who're familiar with the board, you can skip to our software features page and test results segment.

To any hardcore PC gamer, building a gaming rig is akin to tuning a sports car where every component is thoroughly scrutinized to ensure it packs the most horsepower for his hard-earned money. A well-tuned car is greater than the sum of its parts; however, at the heart of a high-performance gaming rig it doesn't hurt if a high-end motherboard is featured to ensure the rest of the components work together like the well-tuned sports car. 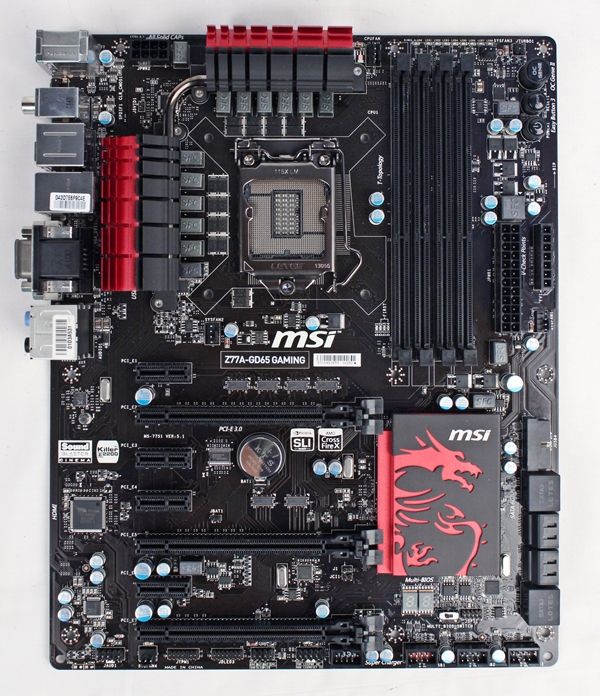 Building on the success of its gaming series laptops, namely, the MSI GT70 and the MSI GT70 One, the company has launched the Z77A-GD65 Gaming as its flagship gaming motherboard aimed squarely at PC gamers and enthusiasts. The board bears the Dragoon Army motif that signifies membership to a group of elite fighters, according to MSI's official gaming site. Besides sporting such a fancy chipset heatsink,  this standard ATX board is also chock-full of high-end features and supports LGA1155 processors. We also drew comparison to another MSI offering, the Big Bang Z77 MPower. Although they are very different in their appearance as well as their target market, they do share some similar features. So read on to uncover the details of the Z77A-GD65 Gaming board!

There are three PCIe Gen 3.0 x16 slots that support both but NVIDIA SLI and AMD CrossFireX multi-GPU setups. The board will support such setups only with the use of a third generation LGA 1155 processor. Like a typical LGA1155 board, it can only supply 16 PCIe lanes for these PEG slots; if the first slot is installed with a lone discrete graphics card, it will get to enjoy the full bandwidth of the 16 lanes. If the second slot is also installed with another card, the lanes would be even split between the two occupied PEG slots; with each slot allocated the bandwidth of 8 lanes. Once the gamer maxes out all the slots, the first PEG slot still enjoys the 8-lane bandwidth; however, the remaining pair has to share the leftover 8 lanes evenly. Hence, we did wish that MSI could have included a PLX PEX 8747 high speed switching chip that will effectively double the bandwidth to 32 lanes across all available PCIe Gen 3.0 x16 slots like the Gigabyte GA-Z77X-UP7! 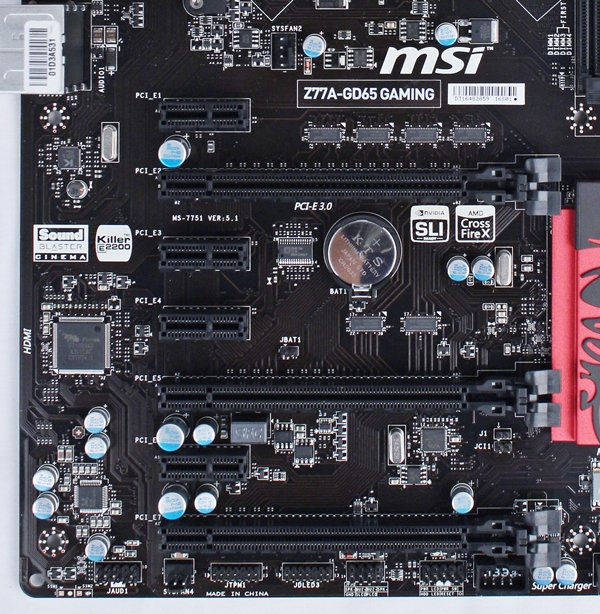 In that respect, we feel the board is a bit of a letdown when it comes to supporting high-end graphics card setups with enough bandwidth. Fortunately, a dual x8 configuration is more than enough for a good percentage of the gamers and enthusiasts. So instead of shoring up an expensive PLX switching chip to accommodate the small percentage of users who will actually use all the three PEG slots, MSI has opted to improve the board's features in other ways as we'll detail further.

Last but not least, take note that there are four PCIe 2.0 x1 slots but there are no legacy PCI ones. Hence, owners of old expansion cards like RAID adapters and sound cards might be disappointed, but it's also high time for users of these legacy devices to move on when upgrading to a new system.

The MSI Z77A-GD65 Gaming board features Military Class III components that consist of Hi-c capacitors (Hi-C Cap), super ferrite chokes (SFC), along with DrMOS II and solid capacitors (Solid Caps). The CPU voltage regulation circuit sports twelve phases and with its Military Class III components for unadulterated, smooth power delivery for the processor, we expect this board to appeal to overclockers, especially with its support for overclocked memory modules that have been rated up to DDR3-3000+MHz. 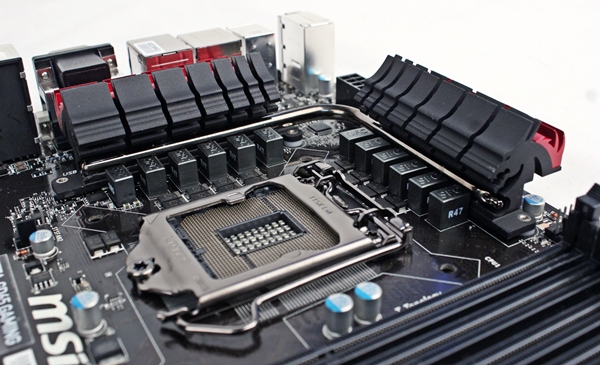 To the right of the LGA1155 CPU socket, there are four DIMM slots; beyond the clips of the DIMM slots, near the edge of the board, there is a DrMOS alarm LED and eight CPU Phase LEDs. As mentioned earlier, the CPU has a total of 12 power phases for a reliable flow of power and these eight LEDs will light up to indicate the number of power phases in active operation; while the DrMOS alarm LED will light up when the MOSFET ICs have overheated. 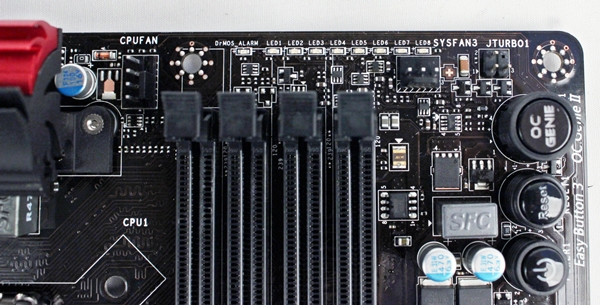 We have noted the awkward position of the onboard control buttons (Easy Button 3) as they will be inaccessible after the board is mounted inside a tower chassis with its optical disc drive (ODDs) in place. As we moved along the DIMM slots, away from the Easy Button 3, we see the voltage checkpoint connectors that are located near the ATX power connector. 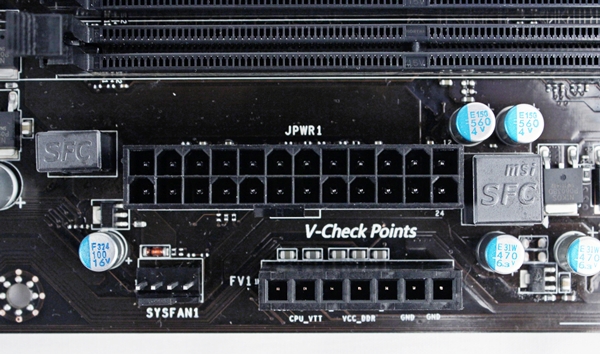 Write a Review
Compare This | Specifications
Consistently good performer across all tests
Very overclockable
Killer Gaming networking controller
Lack of bundled Wi-Fi and Bluetooth connectivity which its competitors offer
More PCIe lanes for multi-GPU configuration would have made this the best gaming board
Our articles may contain affiliate links. If you buy through these links, we may earn a small commission.
Sponsored Links