Taiwanese manufacturer MSI’s new 11.6-inch, Core i5 running Slidebook S20, is the poster-boy of the company's prowess in designing new-age notebooks. The company has been grabbing headlines in recent times for its well balanced gaming notebooks, which the MSI GT70-0NE won our Editor's Choice Award for Best Gaming Notebook segment at our Tech Awards 2013 event. 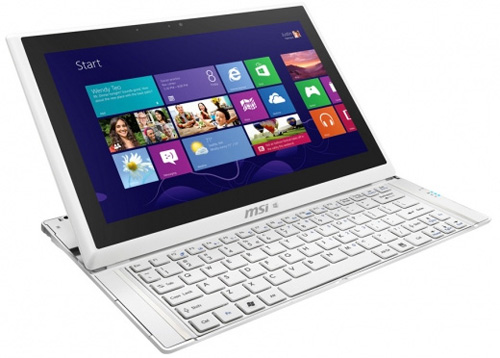 Likewise, MSI has impressed us with the Slidebook S20 nearly a year ago at Computex 2012 as it was one of the earlier vendors to adopt the sliding convertible notebook design for a mainstream notebook - well before more popular competitors like Toshiba and Sony came about. The company has also been a forerunner of introducing really slim and lightweight notebooks with the X-Slim series, well before Ultrabooks became a standard. We first shared their X-Slim line-up in 2009, following which we've reviewed them here and here.

It took the Slidebook S20 some time before availability improved across the globe, thus eroding its lead in the convertible Ultrabook segment. Fortunately, there are only very few products that fit this new and rising notebook segment and it still has a fighting chance. That's why we are here to present you our review of the MSI Slidebook S20 to increase your options.

As you might have noticed, the S20 starts off as a tablet, but can effortlessly convert to a notebook form factor, just like the Toshiba Satellite U920t and the Sony Vaio Duo 11. Its conversion method is very much identical to the Toshiba Satellite U920t with its rail-like system that runs down both sides of the display, while a steel rod stabilizes the rails so that it slides evenly. 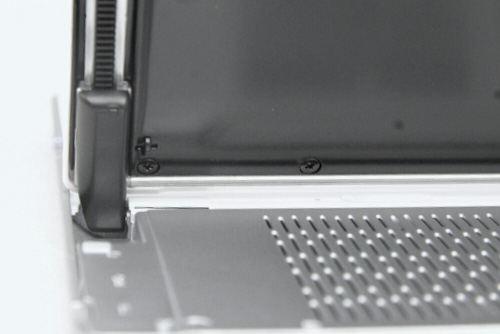 This conversion method allows the S20’s display to be tilted in almost any angle you’d like, even flat down for easy interaction with the screen, just like on the Toshiba U920t. However, because the S20 is smaller, there’s no need for a stabilizing rail in the centre like on the U920t, which distorts the U920t’s display.

While the sliding mechanism for the S20 is pretty smooth, it’s not as silky smooth as the Sony Vaio Duo 11 which also has a sliding form factor, but uses a different mechanism. Also, unlike the Sony Vaio Duo 11, which could convert its form in one fluid motion, the S20 requires a two-step motion. You’d have to flatten the display, and then push it in, just like how you’d do it with the Toshiba Satellite U920t. However, the design adopted by MSI and Toshiba does have an advantage whereby you can prop the screen to any angle you desire and that too is a plus point when trying to use your convertible Ultrabook in various positions and scenarios.

We must say at first glance, the S20 does look like pretty and sleek machine. Its bezel is pearl white (it only comes in white) while the back of the machine is silver machined aluminum. Having said that, we still feel a matte black finish would actually increase the appeal of the Slidebook S20. A quick look at what's on the market and you would realize that white isn't as popular a choice as black and our gut feeling tells us that the S20 would have a more executive look if it was finished in black. On the other hand, white would also help it stand out and that's probably the reason why the Slidebook S20 is only offered in white.

Colors aside, we like how the machine looks when it’s closed in its tablet form. It reminds us of the iPad, except that the Slidebook S20 is a full fledged notebook that's much thicker at 19.8mm and heavier at 1.16kg (1160 grams). This bulk and weight is unfortunately unavoidable if you need the power of a full notebook, which the Slidebook S20 delivers. As expected, it is quite heavy to hold the device in tablet mode for a long duration and you would quite likely use it on your lap or table. Since the device can slide the keyboard out, we often found that it can help act as a base while you prop the screen at any angle you desire for maximum comfort. So unlike most tablets in the market, we found the Slidebook S20 more adaptable - as long as you don't mind the extra bulk of the device.

General handling in tablet mode was good as we didn't notice any creaks or flex on the machine, most likely thanks to the aluminum underbelly. However, we did encounter one annoyance that might affect users depending on how one holds the Slidebook S20. As pointed out in the below photo with a red arrow, that's the location of the machine's power button and it's right smack in the way where we handled the device. As such, if we exerted more pressure, the system would accidentally transition to standby mode or power-up unexpectedly. MSI should have really paid more attention to basic handling behaviors. 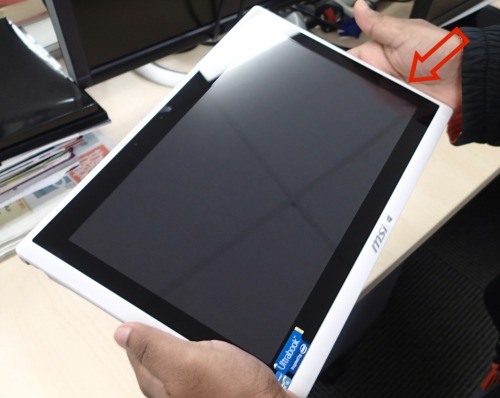 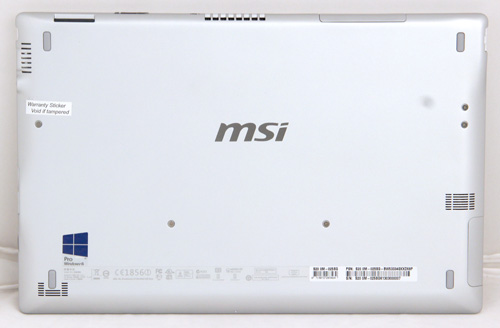