Since the Prestige 15 is a 15-inch notebook, we are going to compare its performance against other 15-inch notebooks. Unfortunately, we haven’t tested the latest versions of the Prestige 15’s closest competitors like the ZenBook 15, XPS 15, and Aero 15. However, we do have other comparable notebooks like the last generation Aero 15 as well as gaming notebooks like the Predator Triton 500 and Forge 15 Pro. Still, the comparisons are going to be interesting because the Prestige 15 uses less powerful but more efficient components to achieve its portable size. So what we are going to be looking at is just how much performance you sacrifice and just how much you gain in portability.

Graphics performance was also in line with our expectations, although, once again, it was no match for the other notebooks. Bear in mind that the other notebooks are powered by considerably more powerful RTX-class GPUs. To give you an idea of the difference in compute power, the GeForce GTX 1650 Max-Q is capable of 2.55 TFLOPs of compute power whereas the GeForce RTX 2060 is capable of 4.608 TFLOPs of compute power. In games, notebooks with RTX-class graphics were at least 50% faster than the Prestige. Nevertheless, the Prestige 15 is sufficient for accelerating compatible apps and also powerful enough to play games (as long as you turn the settings down). Interesting, the Prestige 15 showed little signs of performance throttling – an issue that usually plagues thin notebooks. 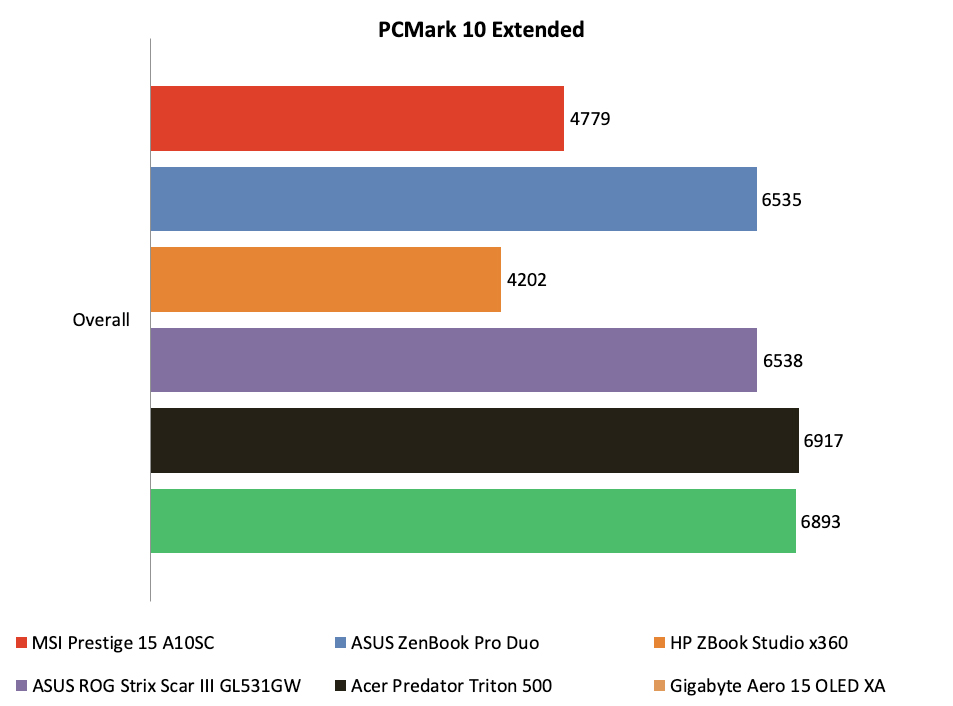 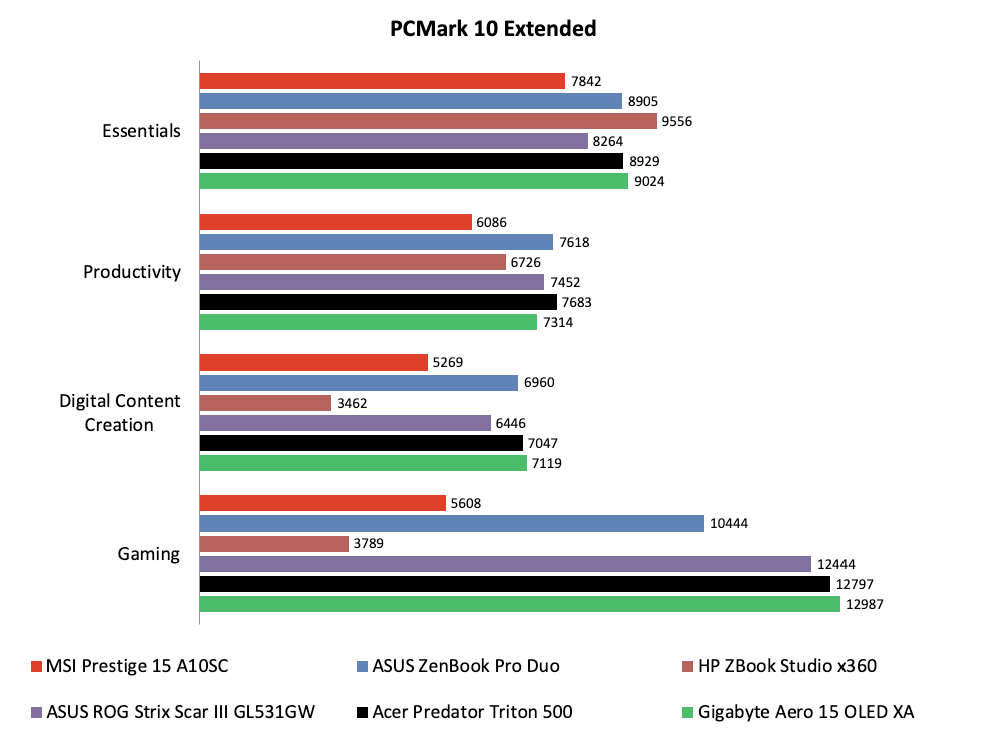 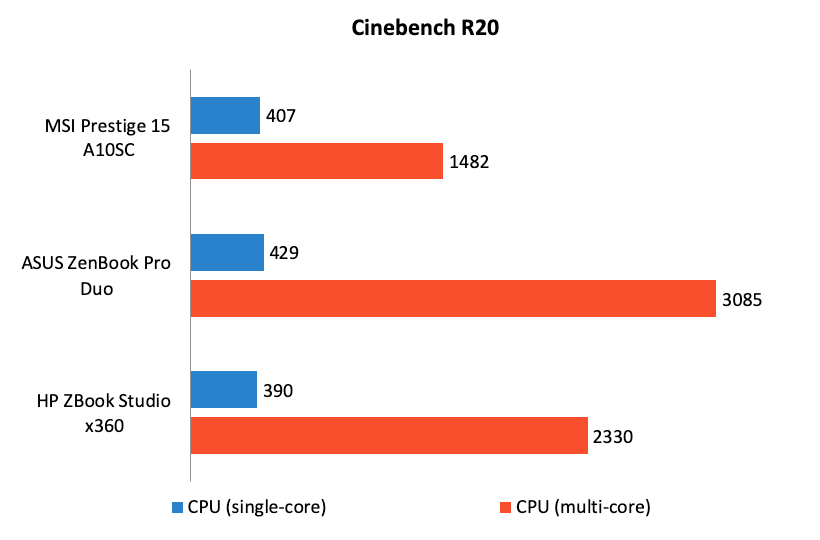 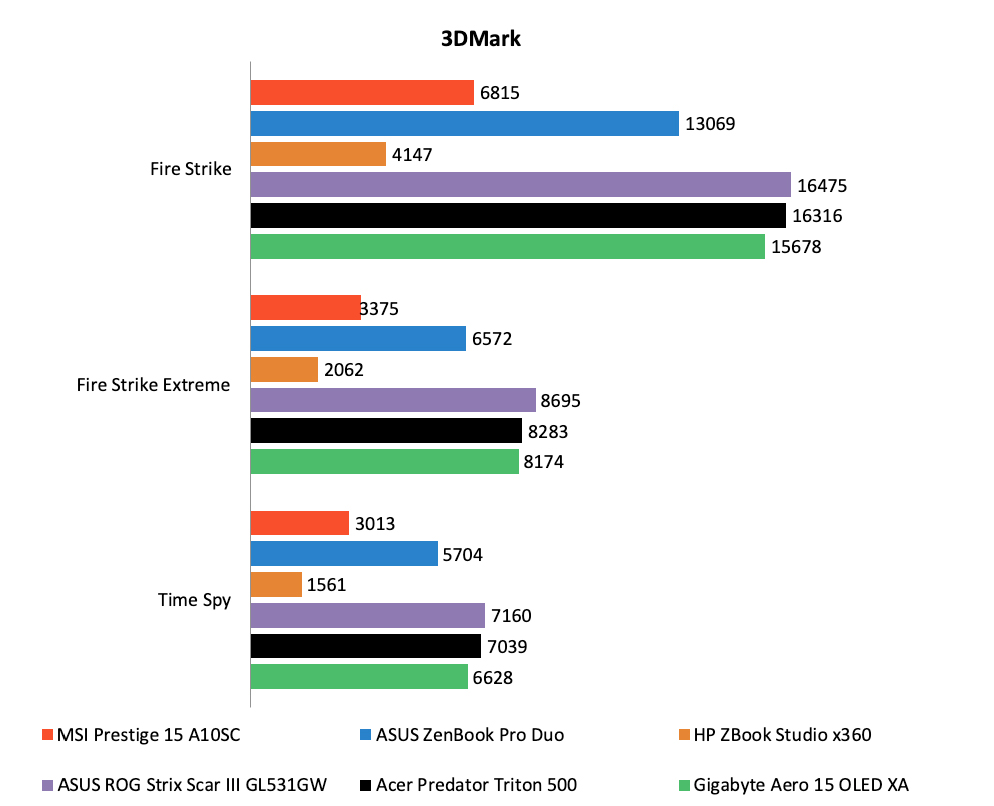 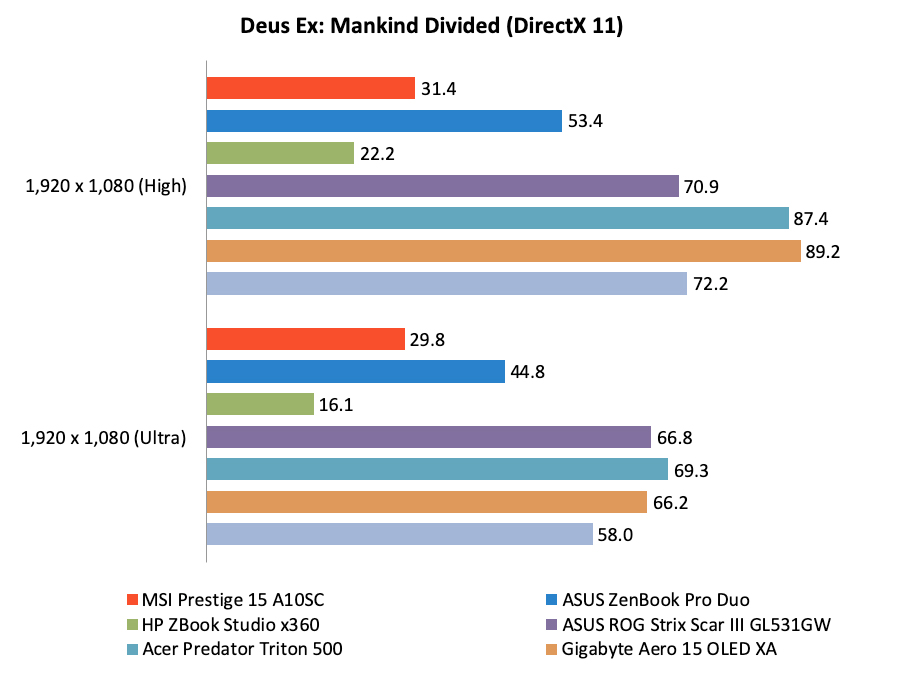 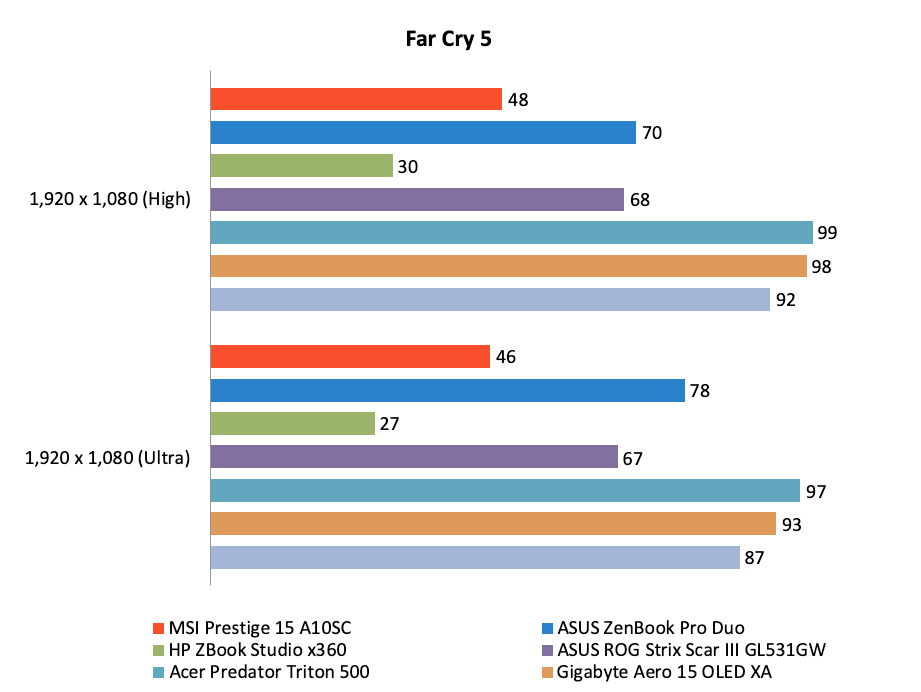 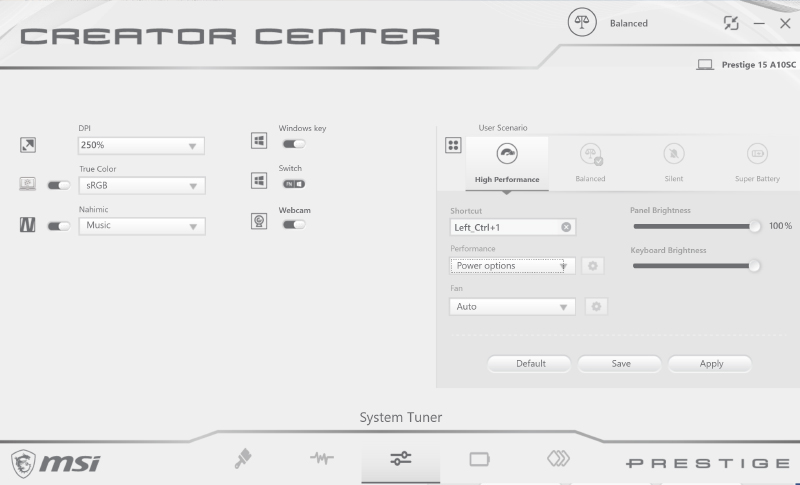 It’s also worth noting that the Prestige 15 has a “High Performance” that can be enabled in the Creator Center app. Even though the notebook doesn’t have an overclockable CPU, turning on “High Performance” mode turns the fans up, enabling the notebook to run at higher clock speeds for longer. And there’s a genuine boost in performance especially in CPU-intensive workloads. For instance, in Cinebench, multi-core scores went up by as much as 80%. This can be handy for users who need to edit and render videos. This brings me neatly to my next point – temperature.

Such hardware in a body that’s just 15.9mm thick is always going to cause heating issues. And the Prestige 15 runs really warm. CPU and GPU temperatures are within the acceptable limit but the body is scorching hot when it’s heavily taxed. The top corners of the keyboard were just a few degrees shy of 50°C and were unbearably hot to touch. It’s also over 10 degrees hotter than the other 15-inch notebooks that we tested. The palm rests were hot too – the warmest amongst all the other 15-inch notebooks. In short, you probably don’t want to be doing anything too intensive if you are using this notebook on your lap. 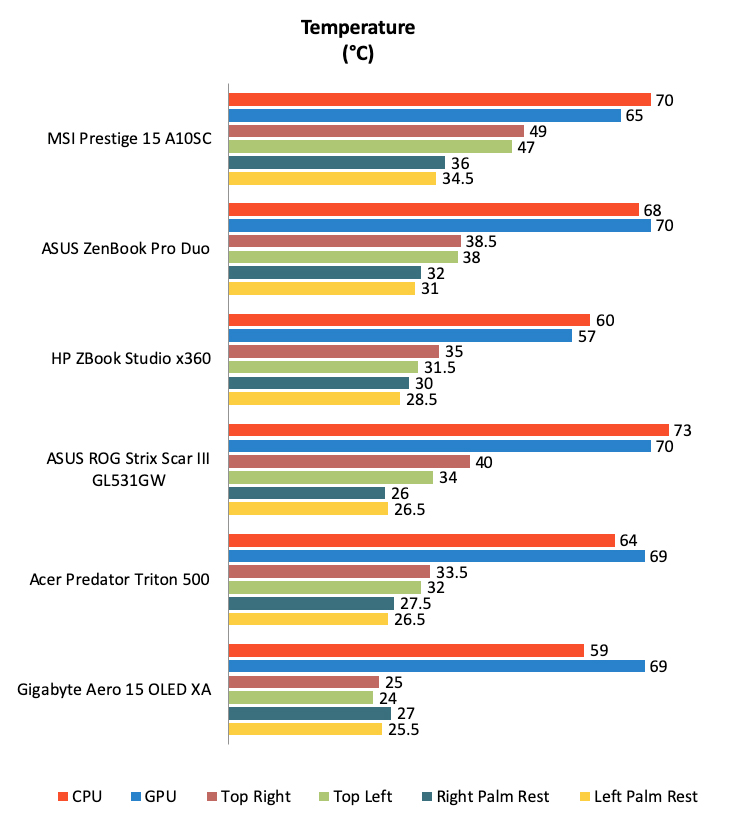 Battery life is commendable for a notebook with a 15-inch 4K display at 286 minutes or just 14 minutes shy of 5 whole hours. The only other notebooks here with 4K 15-inch displays are the ASUS ZenBook Pro Duo and Gigabyte Aero 15 OLED. Power consumption is a little on the high side but that’s forgivable given its bright 4K display. Thanks to its slim dimensions, its portability score was way ahead of the pack especially if you take into account its battery life on the Modern Office workload. It still managed the best score on the Gaming workload but because of its high power consumption, its lead wasn’t as impressive.

You can extend battery life by engaging the "Super Battery" mode in the abovementioned Creator Center app. This dims the display and forces the processor to run in its most efficient mode. You lose performance but gain a lot of battery life. In my tests, I found that I could stretch its battery life to an incredible 583 minutes – that's more than double. 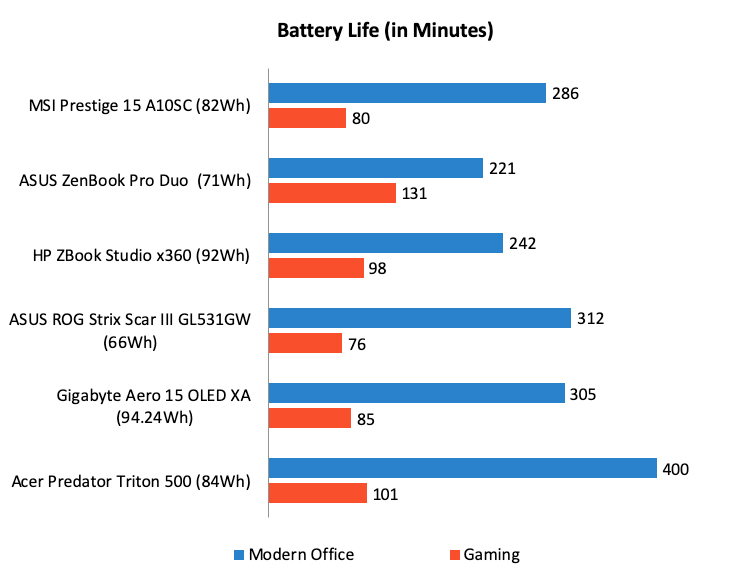 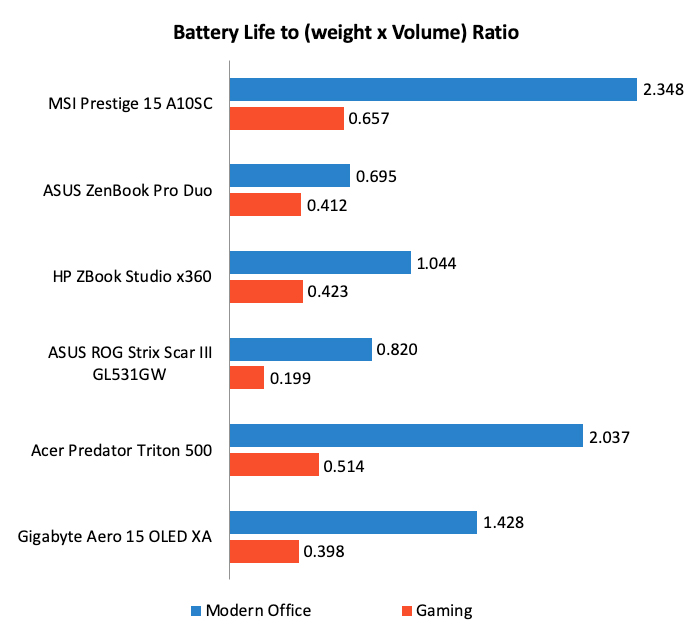 Thin, light, and powerful, but with compromises 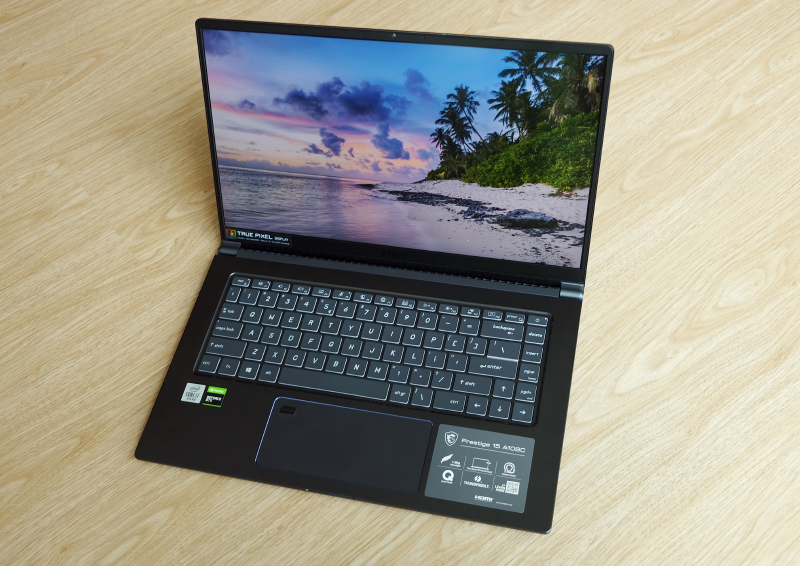 The Prestige 15 is a laudable attempt at creating a powerful 15-inch notebook that’s still relatively slim and light. But I think it’s an awkward compromise.

Performance was in line with expectations, but without activating the “High Performance” mode, CPU performance wasn’t actually that much better than a 13 or 14-inch notebook. Graphics performance was a step up but then it trailed behind other 15-inch notebooks which have more powerful discrete GPUs. And then there’s the issue of heat. Under load, this notebook gets scorching hot. I'm usually skeptical about notebook coolers but you might need one for this notebook.

As I mentioned at the start, its closest competitors are ASUS’ ZenBook 15, Dell’s XPS 15, and Gigabyte’s Aero 15. Now, I haven’t had hands-on experiences with them, but on paper,  the ZenBook 15 is the closest rival since it has identical CPU and GPU. The XPS 15 and Aero 15, on the other hand, are markedly more powerful machines. The XPS 15 and Aero 15 have more powerful 45W CPUs and more powerful discrete graphics. The downside is that they are thicker and heavier, but not by a margin so wide that I’ll immediately discount them if I was looking for a powerful and portable 15-inch machine. 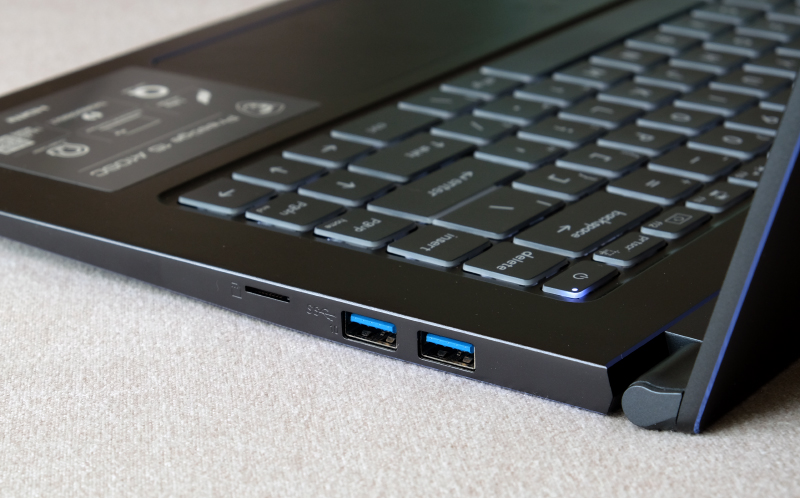 Still, if portability and performance are important to you, the Prestige 15 is worth a close and hard look. Few other 15-inch notebooks are as slim and light. LG’s gram 15 is lighter but it relies on integrated graphics so its performance isn’t competitive at all. And while the ZenBook 15 might have identical specs, it’s thicker and heavier than the Prestige 15. The XPS 15 and Aero 15 might be more powerful but are heavier still. The two weigh about 400g or 25% more. If you need to carry around your notebook all day, every gram counts. It also helps that at S$2,649, the Prestige 15 (even with the optional 4K display) is much cheaper than the XPS 15 and Aero 15, though it's dearer than a similarly-spec'ed ZenBook 15 (S$2,498).

So while the Prestige might be an awkward compromise between performance and portability, it does at least carve a happy niche for itself in the marketplace. Just remember to keep it off your lap.