Note: This review was first published on 30 December 2021. 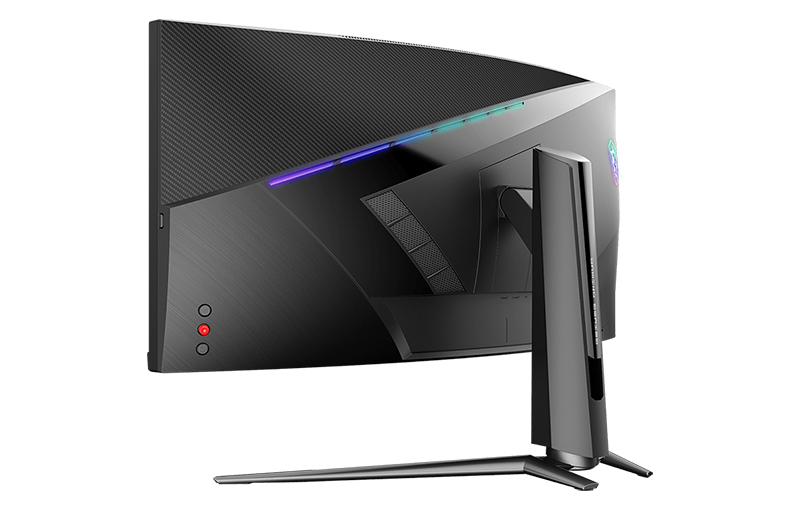 There are no half-measures when it comes to the MSI MPG Artymis 343CQR. It's a top-of-the-line 34-inch ultrawide screen, complete with a crisp 3,440 x 1,440-pixel resolution and 165Hz refresh rate to boot. The sprawling 21:9 aspect ratio wraps around you with a tight 1000R curvature, putting it on par with the aggressive curvatures on Samsung's Odyssey monitors.

While curved screens may seem gimmicky on smaller monitors, they can come in handy on a larger screen like this one. The curve ensures that images are equidistant from your eyes, so they have to work less hard to adjust to images on the peripheries of the screen. There's also the fact that the curve makes ultrawide monitors look more aesthetically pleasing, in addition to better mimicking the effect of 3D space for a more immersive experience.

It supports a good range of tilt, swivel, and height adjustments as well, and I had no issues getting it to the right position to suit me. 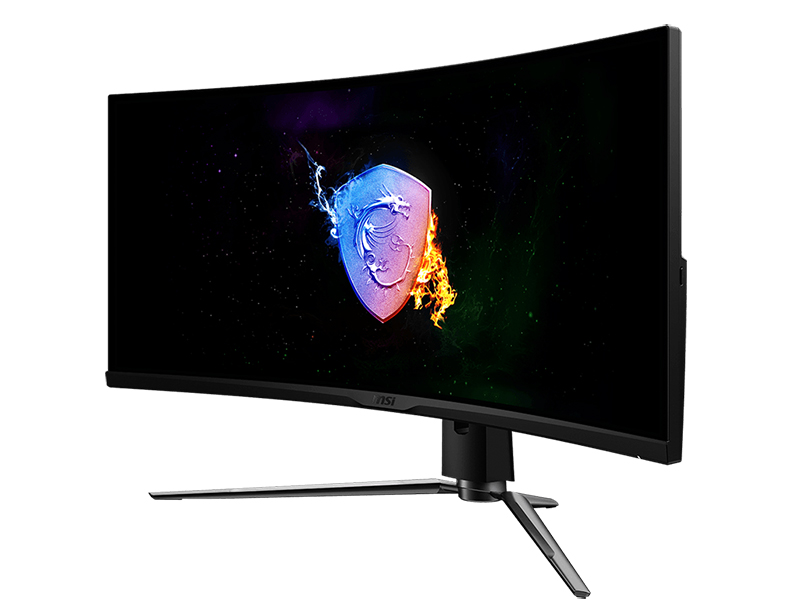 The MSI MPG Artymis 343CQR also has a DisplayHDR 400 certification and a peak brightness of 550 nits that comfortably exceeds the latter specification, in addition to a 1ms MPRT and 3,000:1 contrast ratio. The VA panel can help circumvent the problem of IPS glow, and you get the deep, inky blacks that the technology is known for, despite the lack of local dimming.

In a word, this monitor pops. Colours leap off the screen right out of the box, and the wondrous world of It Takes Two is brought to life with punchy hues. From the explosion of colours in the Road to the Magic Castle to the moody hues of the Gates of Time, every stage looks absolutely incredible as I worked to get May out of her wooden doll figurine and back into her body. 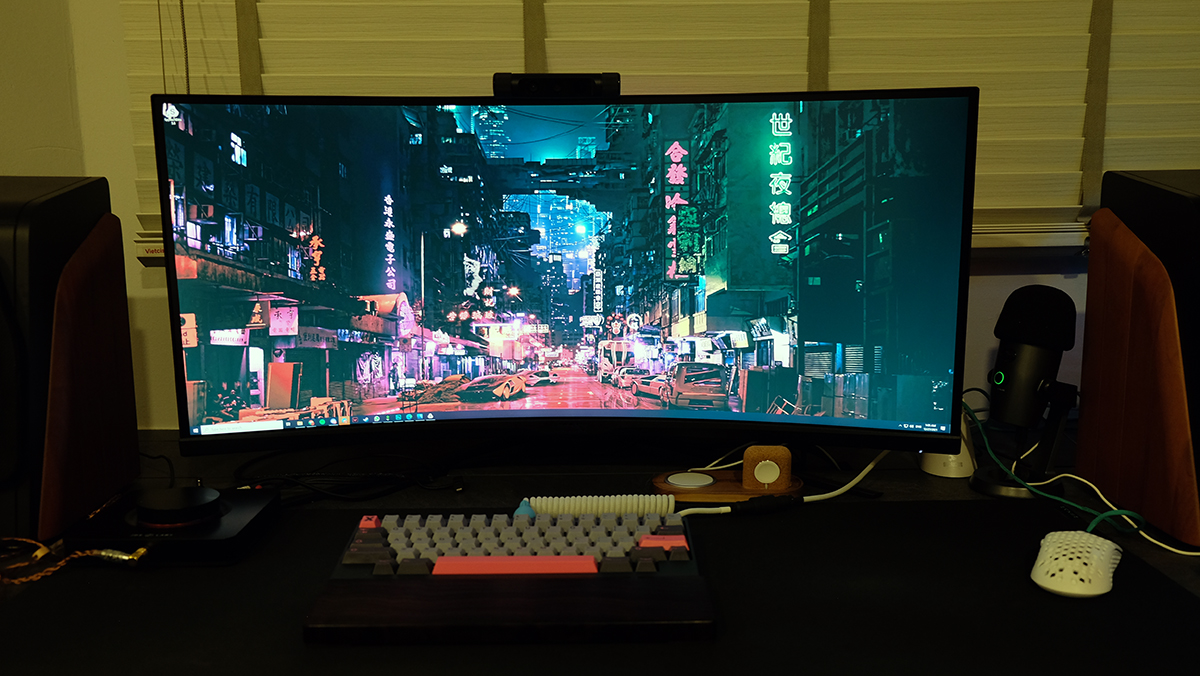 The same goes for films and series on Netflix, which shine with lively tones and detailed highlights. Support for AMD FreeSync goes some way toward helping to eliminate tearing, and although it is not officially G-Sync Compatible, it is still possible to get G-Sync working with a few specific steps. The 165Hz refresh rate puts it on par with most of the competition, and games feel incredibly smooth and fluid.

The monitor offers three response time settings – Normal, Fast and Fastest – and it's set to Fast by default. This is the best setting out of the three in terms of reducing blur and ghosting, but there is still noticeable ghosting and trails in BlurBuster's TestUFO Ghosting Test. If you're looking for a screen that is the absolute best at handling fast motion, this may not be it. In comparison, the Samsung Odyssey G7 exhibits almost no noticeable ghosting in the same test, likely due to its higher 240Hz refresh rate. 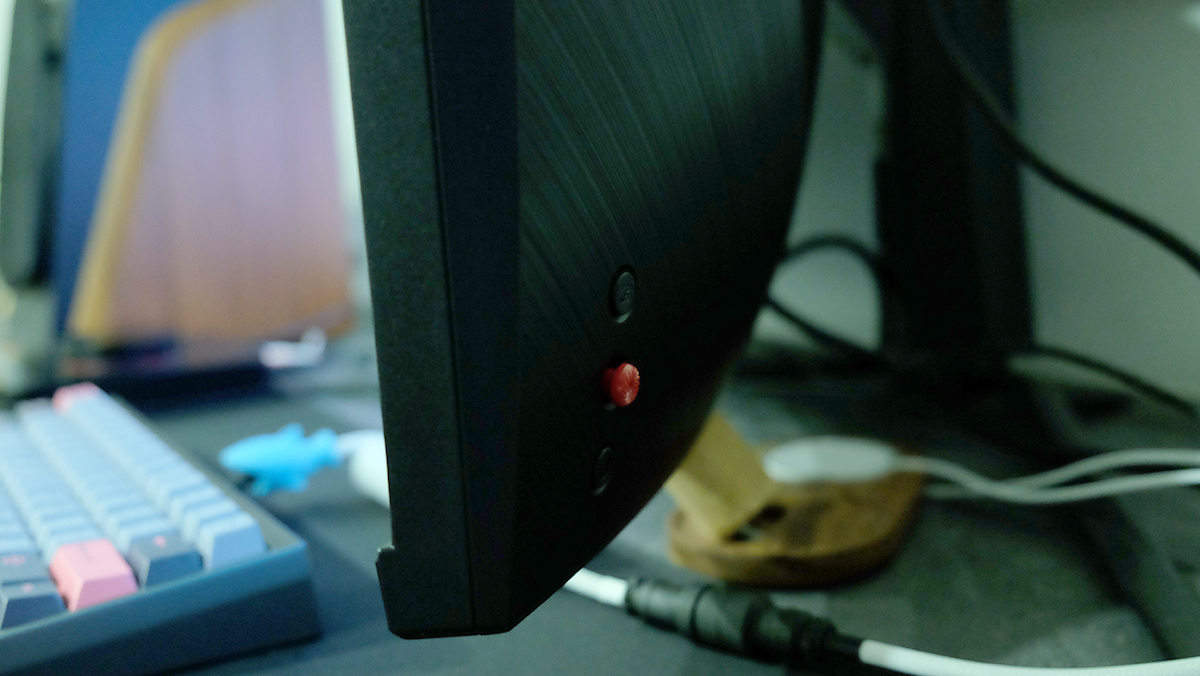 In our testing using Datacolor's SpyderX Elite, we recorded 89% coverage of the DCI-P3 colour space. Overall performance is generally excellent, going toe-to-toe with the best monitors out there. There are some deviations in terms of luminance uniformity, where the top and bottom areas of the screen differ from the centre by up to 10% at 100% brightness, but that's not something that bothered me while using the monitor. 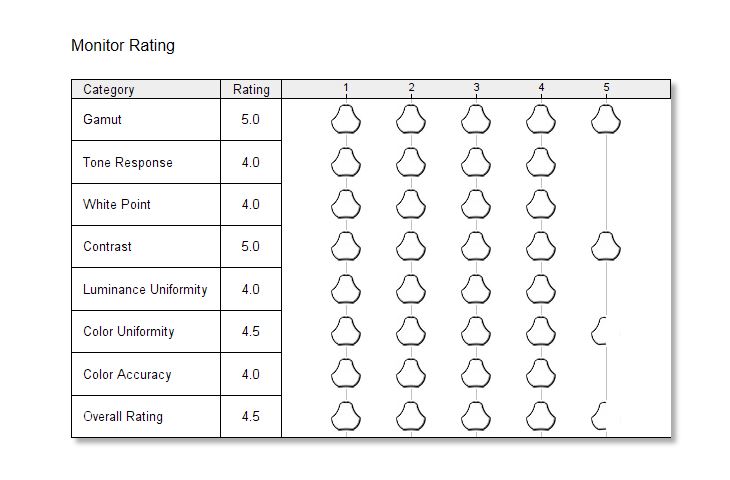 With that said, the 21:9 aspect ratio means that not all content formats or games are going to be supported. For example, while Netflix works great and will fill your screen nicely without any black bars, the same can't be said for Disney Plus. The same goes for games, where titles like Valorant don't support an ultrawide aspect ratio. Having said that, the sheer expansiveness of the screen means that it isn't going to be the preferred choice of those who play competitive shooters anyway.

MSI has made some effort to accommodate console gamers with HDMI CEC. It can automatically detect if the input display signal is coming from a console and adjust its picture mode accordingly. In addition, it downscales 4K signals to 2K, so you can use it with something like the PlayStation 5 that doesn't properly support QHD resolution output at the moment.

Nevertheless, there's still a big caveat. Neither the Xbox Series X nor the PlayStation 5 support 21:9 aspect ratios, and the monitor will not scale the image. This means there will be black bars on the side, breaking the immersion somewhat. 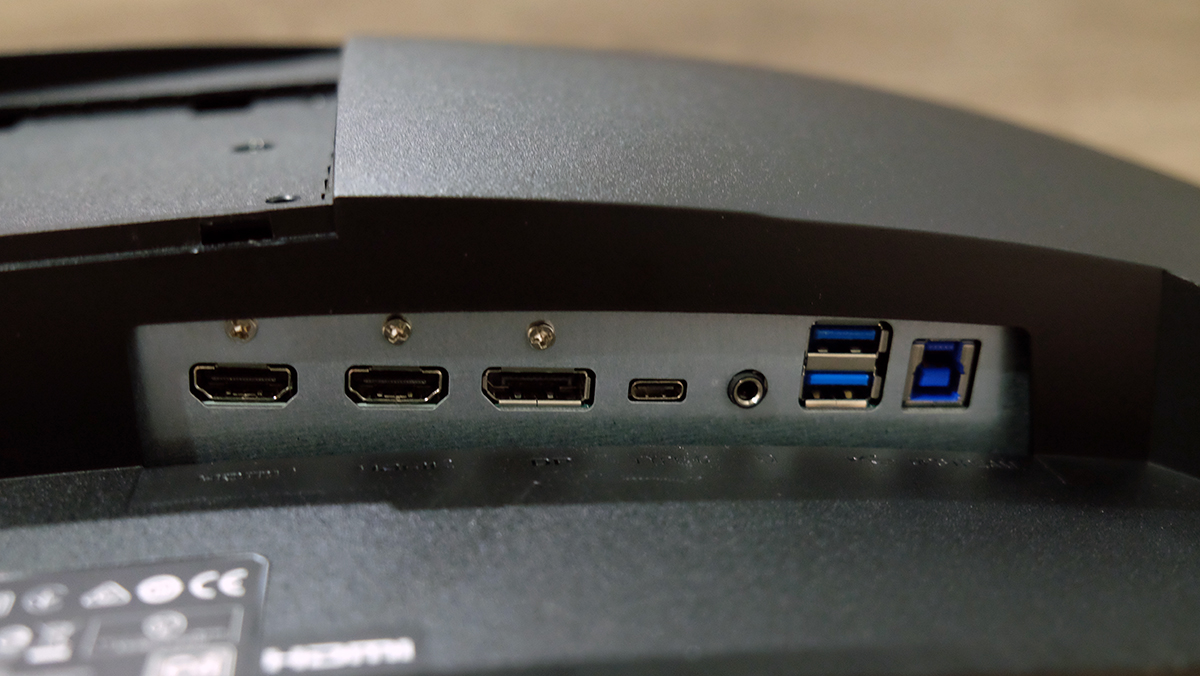 The display inputs include one DisplayPort 1.4, two HDMI 2.0 and one USB Type-C (DisplayPort Alternate) connector. They are joined by two USB 3.2 (Gen1) Type-A ports for any peripherals you might want to connect. 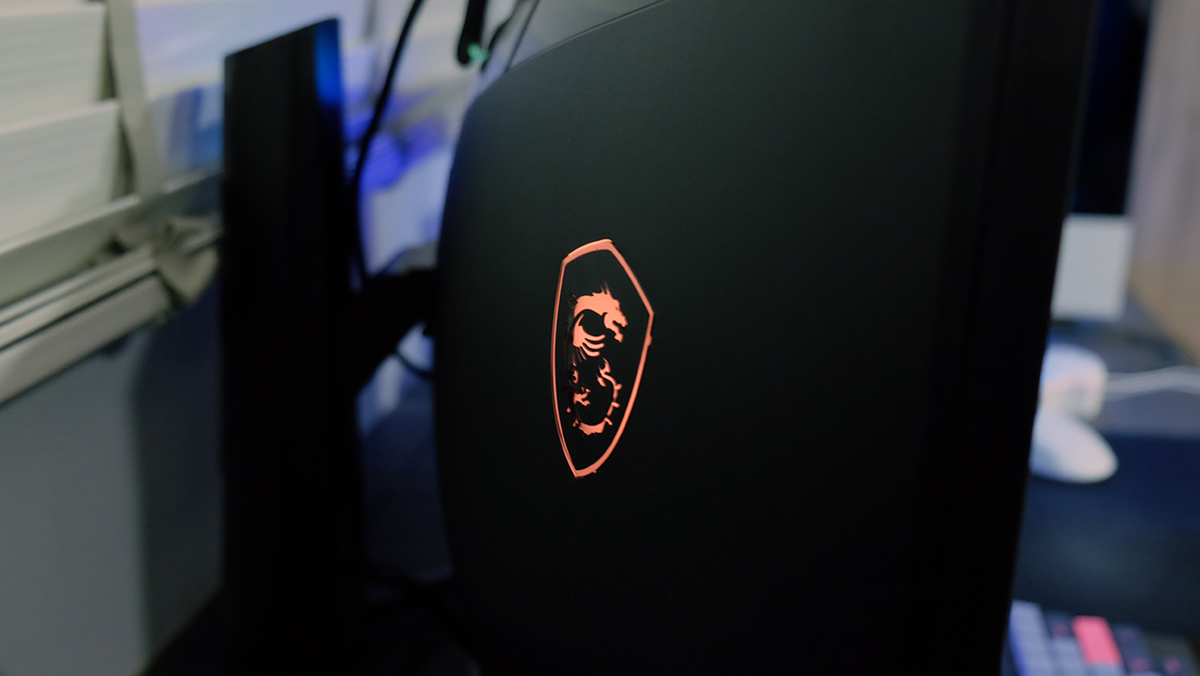 Finally, the monitor is not without its own unique aesthetic flair. A light strip runs diagonally along the back, complete with an illuminated MSI dragon logo that pulses gently. This light remains on even when the monitor is powered off, so if you have the monitor in your bedroom and need complete darkness to sleep, you might want to turn it off in the OSD menu first. 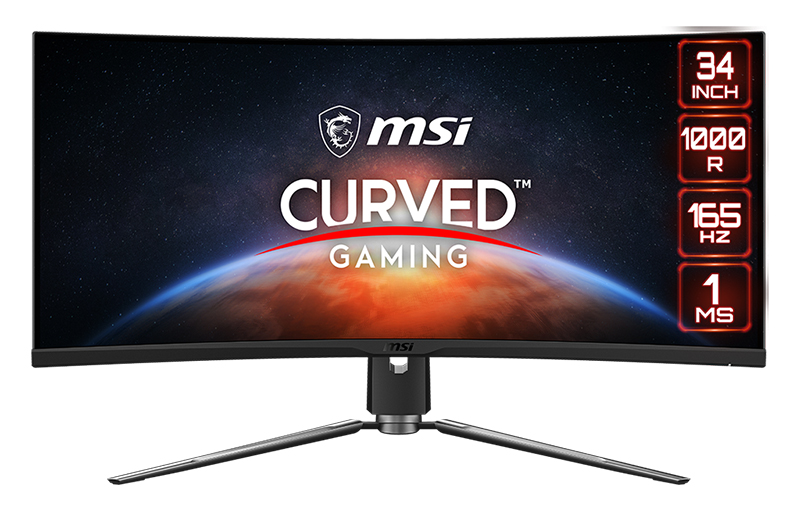 The MSI MPG Artymis 343CQR is a solid monitor for those looking to immerse themselves fully in single-player titles or open-world RPGs that support the 21:9 aspect ratio. Colours are absolutely stellar, and everything about the monitor feels premium and well put together. However, it's not the best fit for those who play competitive esports titles, since they are the least likely to benefit from the extra screen real estate. Console gamers will also not be thrilled with having black bars on either side of their game.

That said, for its price, you'll get a stunning monitor that's great for gaming immersion, racing simulators, and all-around productivity. If you're coming from a regular 16:9 monitor, the bigger screen is a real joy to work with. At S$1,349, its price tag seems more or less in line with the rest of the competition too.

Write a Review
Compare This | Specifications
Immersive 1000R curvature
Excellent out-of-the-box image performance with brilliant colours and deep blacks
Smooth 165Hz refresh rate
No local dimming
Not the best for esports titles that require hair-trigger responses
Our articles may contain affiliate links. If you buy through these links, we may earn a small commission.
Sponsored Links