Much ado about the GeForce GTX 980M

Much has been said about NVIDIA’s Maxwell second-gen architecture and of the new GeForce GTX 900M series of mobile GPUs, mostly by NVIDIA themselves. Arguably the most famous claim of them all that's attributed to them is that the NVIDIA GeForce GTX 980M GPUs are about 75% as powerful as its desktop big brother, the NVIDIA GeForce GTX 980. Now that’s indeed a bold claim to make as previously, mobile graphics were lucky to be even 50% as powerful as their desktop counterparts. Now NVIDIA’s claiming we can expect about a 75% boost for the 980M? We were practically chomping at the bits to get a notebook with a GeForce GTX 980M to verify their claims.

Our previous experience with the Aftershock S15 demo notebook equipped with a GeForce GTX 970M GPU was already very encouraging, so we can't wait to find out what the top brass GPU has in store for us.

To answer that question, we've managed to secure a a MSI GT72 2QE Dominator Pro notebook for a short test run and find out how it stacks up against previous generation gaming notebooks and its much ballyhooed GeForce GTX 980M mobile GPU.

Looks great, but weighs a ton

With a sleek all black appearance; the GT72 2QE Dominator Pro is one sexy looking beast. That sexiness though comes with a heavy price tag, both physically and financially. Weighing in at more than 4kg (around 3.8 if only with the battery) with the charger, it’s definitely not a portable notebook and you wouldn't want to carry it around for extended amounts of time. It’s also a big notebook too, in terms of size. For a 17-inch gaming notebook, it's really thick, measuring around 48mm at its thickest point and this means that some users may have problems fitting it into their regular notebook bags. Luckily, the notebook comes supplied with its own backpack (which is quite sturdy) so if you do need to lug it around, you’re set. Befitting its size, the chassis is very sturdy with good traction.

Inspect the base and you’ll find an all-black keyboard and trackpad area - until you power up the notebook. The keyboard has back lights and with an array of colors splayed across it. If they’re not to your liking, you can simply change them with the included manager program. Its pretty user friendly so you won’t have to look up tutorials and it allows a high degree of customization to your preference. The keys themselves are sufficiently sized (if a bit on the large side) and you’ll get used to them after some extended use. There are also shortcut buttons on the left side of the base. Arguably, the most important one being the one that controls the fan speed. If you’re gaming while the adapter is plugged in, it’s useful to maintain manual control since you don’t need to worry about battery life, especially if you’re running programs that make heavy use of the graphics processor. As for the trackpad, it’s pretty spacious too, although unlike some notebooks, it’s not built into a groove. It's set flush with the rest of the base, with only the sides raised a bit so that your fingers can feel when they come to the edges. Like the keyboard, the trackpad too has back lights even if it’s only around the border. 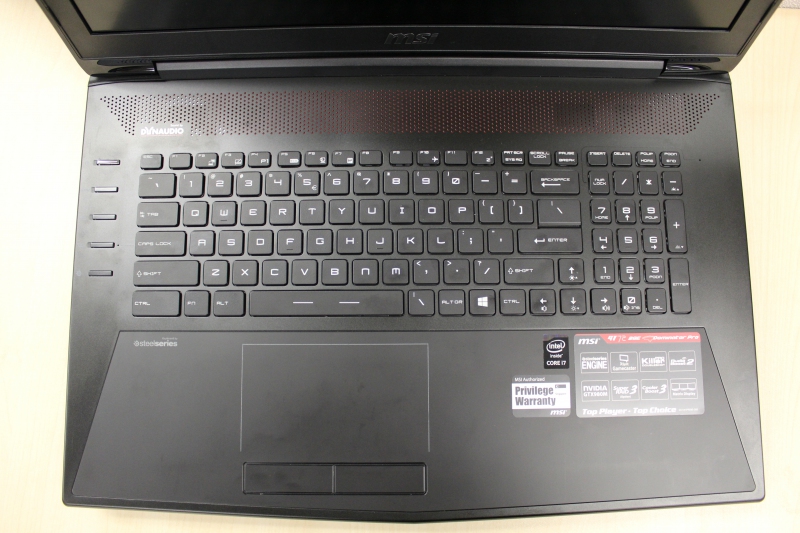 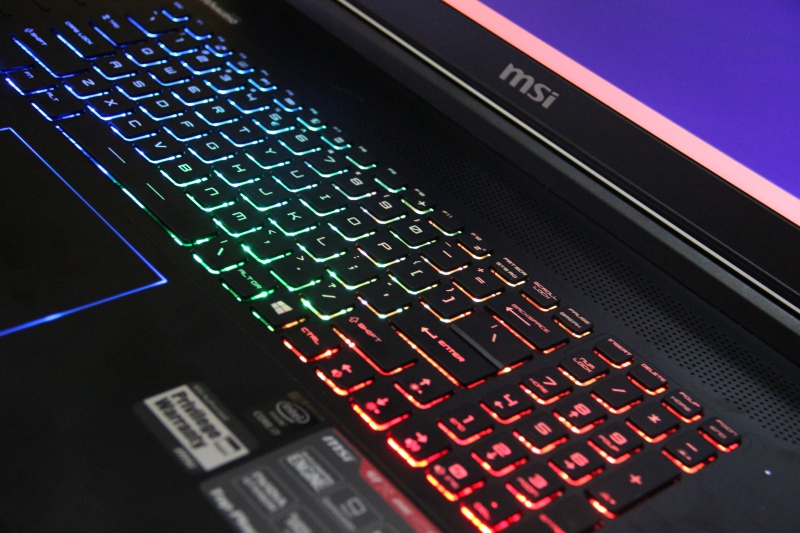 The GT72 2QE Dominator Pro comes with a Full-HD 1080p display with a matte finish. Considering that the notebook is packed to its gills with top tier gear, it's surprising that's only a 1080p screen. The upside is that the GT72 2QE Dominator Pro also lets you use up to 3 monitors to fulfill your visual needs (dual mini-DisplayPorts and a HDMI port are available for this purpose). Just on top of the screen, you'll find a 1080p capable (at 30FPS) webcam. 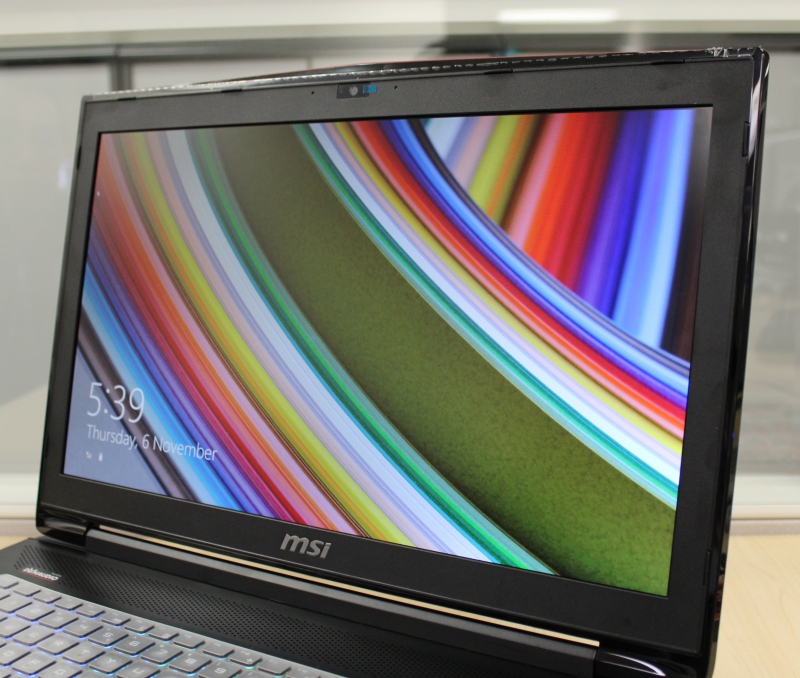 Under the hood, the notebook packs some major firepower. It’s powered by a quad-core Intel Core i7-4980HQ processor that runs at 2.80GHz (Turbo Boost up to 4GHz) with a 6MB L3 cache and 16GB of DDR3 RAM. It also features MSI's SUPER RAID 3 storage technology and in this case, our test unit comes with 256GB of flash storage, courtesy of two 128GB M.2 SSDs set in a RAID 0 configuration. Additionally, the MSI GT72 Dominator Pro has also an extra 1TB mechanical HDD rated at 7200 rpm. On the graphics side of things, it’s of course using the new NVIDIA GeForce GTX 980M mobile GPU that comes with a whopping 8GB of GDDR5 framebuffer. For connectivity, the notebook comes with Bluetooth 4.0, Killer Wireshot Pro GB LAN for wired connections and Killer's newest Doubleshot Pro 11ac for wireless ones. As its name suggests, Killer's latest wireless chipset support Wireless-AC.

The GT72 2QE Dominator Pro is also one of the few notebooks that uses MXM graphics modules. A rarity for notebooks, this allows users to upgrade their graphics cards with other like-sized MXM modules in future. This means if you bought the earlier models with an older GPU, you can easily swap it out and get the NVIDIA GeForce 900M series (or future ones) if you so desire as long as they too are MXM compatible. We've added in MSI's official video showing off this feature so if you're wondering, just watch it and all will be made clear.

There’s also a good variety of I/O ports on the GT72 2QE Dominator Pro. All of the USB ports (six of them) are USB 3.0. There are four of them on the left and two more on the right base. Weirdly, the ones on the left aren't in line, two of them are positioned higher than the others. This doesn’t affect performance, but it does look a little strange. There’s also a flash storage card slot meant for SDXC and SDHC cards, the requisite audio in and out jacks (two of each) as well as a Blu-ray/DVD combo drive. On the back of the machine, there are a few more ports - two DisplayPorts (v1.2), a lone HDMI 1.4 port, a Gigabit Ethernet port and the DC-in jack. 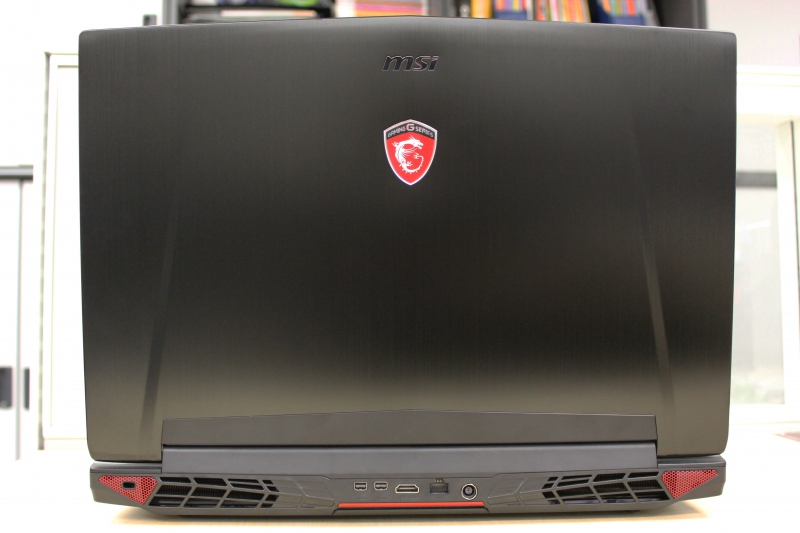 As for the battery, we can't give you a shot of it. It's integrated into the base of the GT72 2QE Dominator Pro, which is bad news if it malfunctions down the line or if one runs dry and you want to plug in a spare. Then again, we doubt buyers of the GT72 2QE Dominator Pro will find themselves using the battery much considering the size of this system.