Apple hikes prices of products in Japan by as much as 25%, unlikely to happen in Singapore (for now)
Product Listing
AlbatronAMDAorusASUSChaintechClub 3DEVGAForce3DGainwardGalaxGalaxyGeCubeGigabyteHISInno3DLeadtekManliMSINVIDIAPalitPowerColorSapphireSparkleXFXXpertVisionZotac

The MSI GeForce RTX 3080 Ti has a marginally higher boost clock than the ASUS model, clocking in at 1,830MHz to the latter's 1,815MHz. In 3DMark, the MSI card took a narrow lead across the board, posting a 5% lead over the Founders Edition card in Fire Strike Ultra. 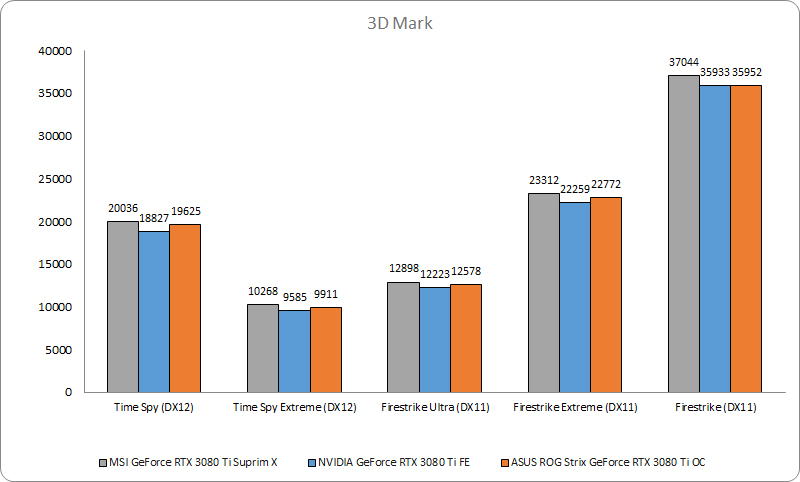 The MSI GeForce RTX 3080 Ti Suprim X cuts through all the games we tested at 1080p like a hot knife through butter. As in 3DMark, the performance difference between it and the other two cards is negligible at best.

The MSI card puts on a similarly strong showing at 1440p. It's ahead of the Founders Edition and ASUS cards in most of the games tested, a slim lead that's testament to the sheer performance it brings to the table. 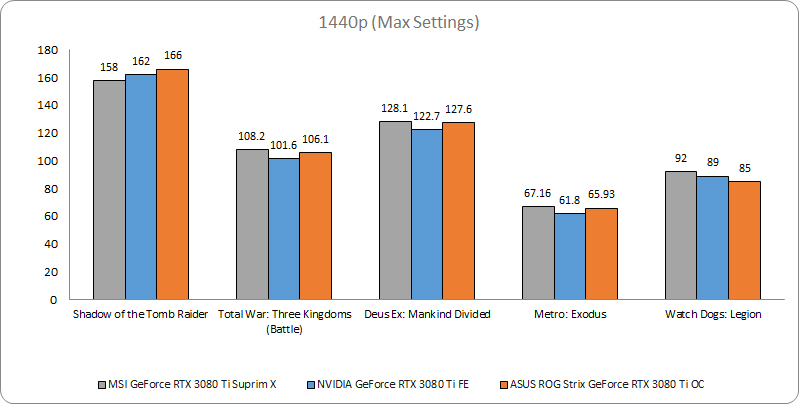 At 4K, the MSI card continues to flaunt its performance chops. Performance differentials with the other two cards rest on razor-thin margins. Metro: Exodus proves a bit more of a challenge than the other games tested, with performance dropping well below the vaunted 60fps. 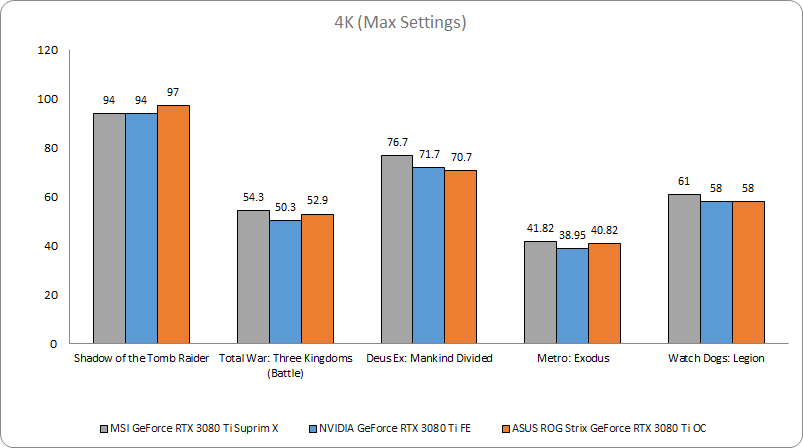 With ray tracing turned on, Metro: Exodus continues to challenge the cards thoroughly. Still, there are no noteworthy differences in performance among the three. 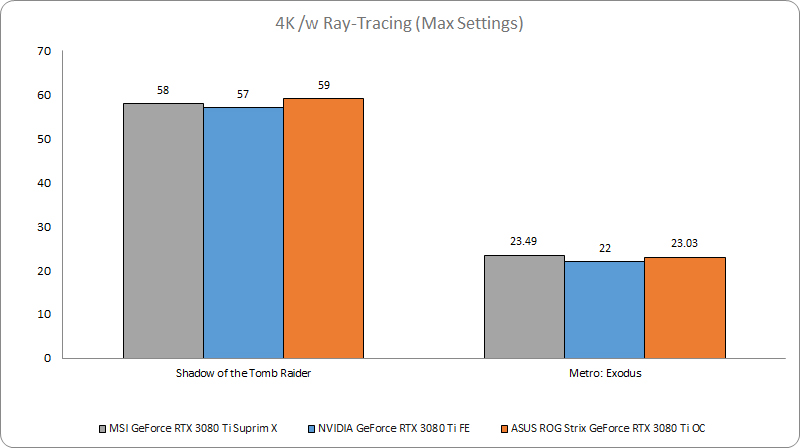 When it comes to thermal performance, the MSI GeForce RTX 3080 Ti Suprim X shines. It's the coolest card of the lot, albeit by a small margin. The massive cooler is clearly putting in the work here and you'll need every bit of that surface area to keep the GA102 GPU cool. Once you factor in that the MSI card is also clocked higher than the cards compared against, the cooling performance showcased by MSI is quite impressive.

Testing the MSI GeForce RTX 3080 Ti Suprim X is kind of like dropping a few hundred bucks on a fancy meal at a posh restaurant. It is chock-full of delectable delights and masterfully executed, but you're not quite sure if it's 400 bucks worth of delicious. I feel the same about the MSI card. It  is super-fast, runs cool, and looks absolutely stunning. It's a winner in every sense of the word. But I'm still not sure if it's S$3,288 worth of amazing.

It's difficult to justify the price when the ASUS ROG Strix GeForce RTX 3080 Ti OC performs very similarly and costs nearly S$500 less. Get this only if you really want the cream of the crop, intend to game at 4K and have the cash to burn.

Write a Review
Compare This | Specifications
Exceptional performance, even at 4K
Stellar build quality and stunning design
Excellent thermal performance
Ridiculously expensive
Requires three 8-pin connectors and an 850W PSU
Our articles may contain affiliate links. If you buy through these links, we may earn a small commission.
Sponsored Links